When Rebecca Hales caught Covid she could barely draw breath. The one-time London Marathon runner was left gasping as she lay in bed in July 2021.

Recovery was painfully slow — shaking off her high temperature and sore throat took many weeks, and her breathing problems persisted.

‘I was panting at the slightest exertion,’ says Rebecca, 55, a community nurse who lives in Wantage, Oxon, with her husband Richard, 56.

But it wasn’t until January that the problem was identified: she was diagnosed with breathing pattern disorder (BPD), essentially chronic breathlessness caused by an abnormal breathing pattern.

While BPD commonly affects those with chronic lung conditions such as asthma or chronic obstructive pulmonary disorder (such as emphysema), or people with anxiety disorders, it is also emerging as a major post-infection problem for many Covid sufferers. 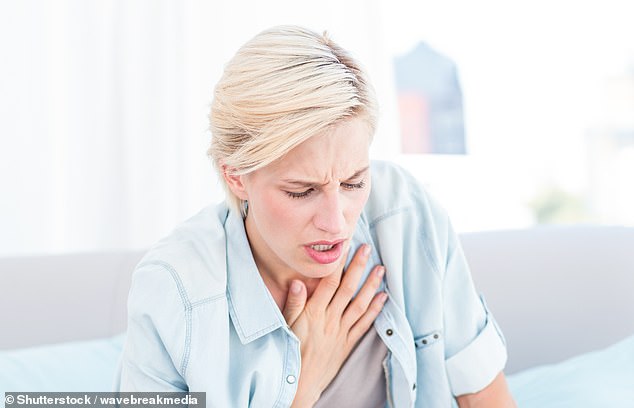 An estimated 1.3 million people in the UK have Covid symptoms lasting more than four weeks after initial infection; 554,000 have symptoms such as breathlessness, fatigue and brain fog after one year. A stock image is used above

Rebecca’s diagnosis came after her GP referred her to an NHS long Covid clinic in Oxford. She says by that point she thought she was unlikely ‘ever to be able to breathe easily again — I never thought I’d get back to the fit, healthy person I’d been before Covid’.

BPD is when someone develops an abnormal respiratory pattern (usually faster, shallower breath), says Emma Tucker, a respiratory physiotherapist at the Oxfordshire Post-Covid Assessment Clinic at the Churchill Hospital, who treated Rebecca.

She adds: ‘But while being breathless can be part of an acute or short-term condition, with BPD it is chronic. Sufferers complain of feeling air-hungry and breathless. This breathing pattern can become habitual — in some people, levels of carbon dioxide in the bloodstream fall because when you hyperventilate, you breathe out more carbon dioxide than usual, leading to fainting and dizzy spells.’

Emma says the number of patients she is seeing with BPD as part of long Covid are ‘really significant and continuing to rise’.

Since opening in May 2020 the clinic has treated 4,000 adults, of whom nearly a quarter had BPD.

An estimated 1.3 million people in the UK have Covid symptoms lasting more than four weeks after initial infection; 554,000 have symptoms such as breathlessness, fatigue and brain fog after one year.

Emma says most report the same symptoms — feeling they can’t get enough air, frequent yawning, and pins and needles in the hands, feet and chest, which can be caused by a lack of carbon dioxide. 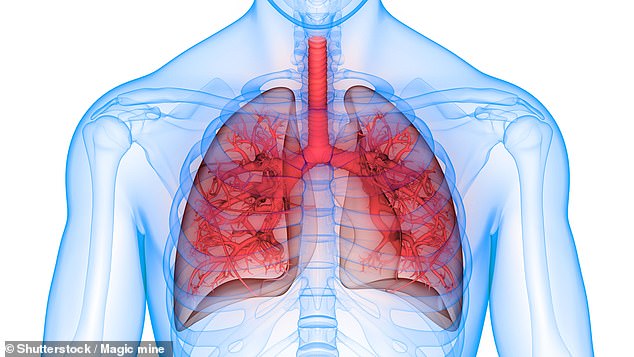 BPD is when someone develops an abnormal respiratory pattern (usually faster, shallower breath), says Emma Tucker, a respiratory physiotherapist at the Oxfordshire Post-Covid Assessment Clinic at the Churchill Hospital, who treated Rebecca. A stock image of lungs is seen above

‘Being breathless all the time, even when you’re resting, speaking or even eating, is incredibly scary,’ says Emma.

But although BPD and long Covid are clearly linked, it’s not yet clear how.

Unlike COPD patients, who have changes in their lungs which will affect the way they breathe, people with BPD linked to long Covid have no physical signs that anything is amiss. ‘Lung function tests and chest X-rays can draw a blank; they’re normal,’ adds Emma, co-author of the Long Covid Self-Help Guide. Despite severe problems breathing, ‘their oxygen saturation levels, the percentage of oxygen in the blood, are normal, too’.

One theory is the Covid virus causes the body’s autonomic nervous system (controlling our fight or flight response, as well as our heart rate and breathing) to go haywire, leading to a faster and shallower rate of breathing.

Another possibility is that it could be caused by vagus nerve dysfunction in long Covid patients, explains Dr Mark Faghy, associate professor in respiratory and exercise physiology at Derby University.

The vagus nerve, running from the brain to the large intestine, controls signals between the brain and organs, and supports the parasympathetic nervous system (controlling the body’s ability to relax).

‘Essentially, the feedback from the body to the brain becomes scrambled and the signals do not match what is being experienced by the body,’ says Dr Faghy. Factors such as pain, stress and anxiety can all trigger BPD, and poor posture — which alters the position of the diaphragm, making it harder to breathe correctly — can also contribute.

How to harness the power of your bodyclock. This week: Wear socks to bed

Bed socks can help us fall asleep faster by tricking the body into cooling down.

When the feet are cold, the body produces heat to warm them up; this also warms up the body as a whole. Wearing socks removes this need and allows body temperature to drop, which is necessary to fall asleep.

Meanwhile, cotton and linen are better than man-made fabrics such as polyester at wicking away sweat, which is also important for temperature regulation, says sleep expert Neil Stanley.

The underlying causes are not entirely understood, but it is clear BPD ‘can be a profoundly distressing condition and some patients we see are desperate’, says Dr Faghy.

Whatever the trigger, a person with BPD typically breathes faster than they should, using the chest and neck muscles rather than the belly and diaphragm, explains Rebecca Livingstone, a specialist respiratory physiotherapist at the post-Covid service at University College London Hospitals NHS Foundation Trust. ‘Normal breathing should be much slower, with relatively little air volume changing in the lungs and only small movement in the tummy.’

The most important technique to learn is efficient breathing, ensuring that most of the work is being done by the stomach and not the chest, says Emma Tucker.

Rebecca Livingstone adds: ‘We show people what a normal breathing pattern should look like and get them to put their hands on their tummy to see where the diaphragm should work. The important thing is we can help fix the problem.’

Rebecca Hales found the virtual workshops she attended helped her to retrain her breathing pattern sufficiently to return to her job as a nursery nurse.

‘I still have long Covid but my breathing is back to normal and I’m less tired,’ she says.

She has even started running again — at a measured pace. ‘I’ve signed up for a Couch to 5K, and I hope to reach that milestone in the not-too-distant future,’ she says.