In chronic obstructive pulmonary disease (COPD), pulmonary rehabilitation (PR) is an integral component of the non-pharmacological management of COPD. Yoga has proven to be beneficial in COPD, although well-designed comparative studies between the two modalities are lacking. This pilot study aims to compare these two modalities delivered as supervised tele-intervention.

6MWD, symptom scores, SGRQ, PHQ-9, and GAD-7 all improved significantly from baseline within each group, but there was no statistically significant difference between the groups. FEV1% did not differ significantly between or among groups. This study shows T-YT module can be a reasonable substitute for T-PR in patients with COPD.

T-YT is beneficial in patients of COPD in terms of exercise capacity, symptom scores, and depression and anxiety scores and can be a reasonable alternative to T-PR.

Chronic obstructive pulmonary disease (COPD) is a progressive respiratory disease that causes airflow obstruction and respiratory distress, which is often preventable and treatable. Smoking and environmental pollution are the main causative factors of this disease [1]. It can cost as much as $50 billion in healthcare expenses in countries like the United States, where COPD is the third leading cause of mortality [2]. Currently, inhaled bronchodilator therapy is the predominant treatment for COPD [3]. Pulmonary rehabilitation is a recognized, non-pharmacologic method for managing dyspnea and exercise intolerance in COPD [4]. Pulmonary rehabilitation is a supervised program consisting of fitness training, health education, and breathing methods designed specifically for people with chronic respiratory diseases.

Yoga, a form of psychophysical activity, is used in the treatment of various respiratory diseases. Yoga's three primary tools are the body, the breath, and the mind. According to studies, yoga can enhance breathing patterns, chest expansion, lung capacity, body posture, health-related quality of life, and respiratory symptoms [5]. However, yoga is not a part of non-pharmacological management in COPD patients according to national or international guidelines [6]. This validation pilot study aims to compare the effect of tele-yoga therapy (T-YT) on tele-pulmonary rehabilitation (T-PR), in addition to standard treatment, in COPD patients. The novelty of this study is that both interventions have been delivered at home via online platforms as tele-interventions. Objectives also include validating a 45-minute yoga module used as part of the intervention in this study.

Development of the yoga module

Scientific research publications connected to yoga and COPD were screened in PubMed, Scopus, and Google Scholar databases with crucial phrases: yoga and COPD. Based on the literature review, we found a protocol performed by an Indian study on COPD patients, including Asana, Kriya, and Pranayama. The module is referred to as the "45-minute yoga module" [7].

This two-arm pilot validation study was conducted at AIIMS, Rishikesh, between January 2021 and June 2021 and registered with the clinical trials registry of India (CTRI) with the number: CTRI/2020/11/029249. The study adhered to the standards of the Helsinki Declaration [9].

Participants who agreed to participate and met the inclusion criteria were randomly assigned to either the intervention or the control arm. The computer was responsible for producing the sequence of randomization. Opaque, sequentially numbered, sealed envelopes were used for group allocation.

Blinding of participants was not possible, but the outcome assessor and statistician were blinded.

For the entirety of the module, S-CVI/UA was calculated using the universal agreement technique, and the CVR value was determined using the Lawshe method. Ayre and Scally (2014) report that the crucial value of CVR for a group of 24 experts is 0.47. Thus, items with a CVR of 0.47 or above were retained for the 45-minute yoga module [16]. The CVR results of the yoga module demonstrated that these specific practices are considered essential for COPD by medical specialists. 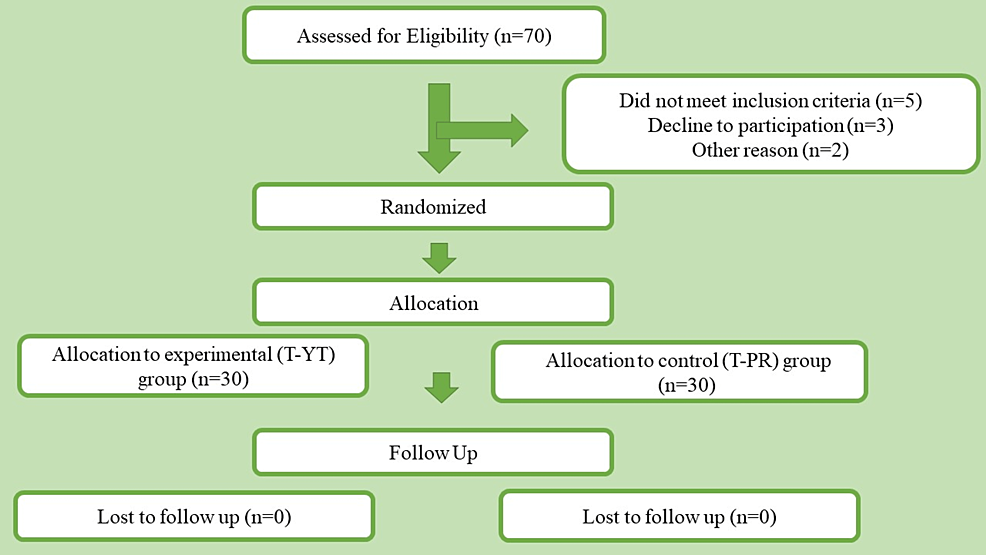 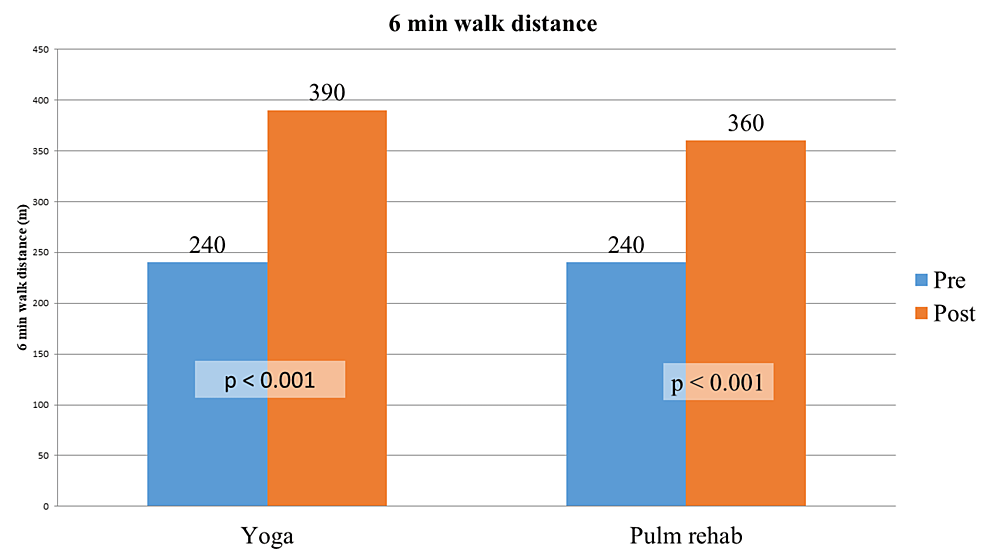 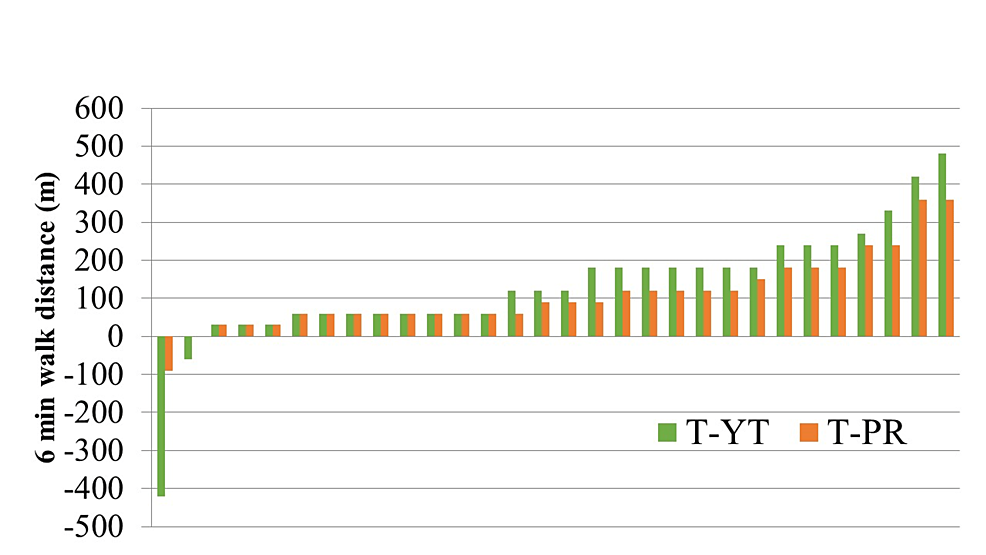 FEV1% showed no statistically significant difference within the two arms at the end of three months (p>0.05) or between the two arms (p=0.605).

Sixty patients diagnosed with COPD were recruited from a tertiary care center for this study (AIIMS, Rishikesh). Thirty patients were randomly assigned to either the T-YT or T-PR arm.

PR is an integral part of non-pharmacological management in COPD [17]. The COVID-19 pandemic forced a shift from onsite to online interventions, including a shift from institutional PR to tele-PR. Tele-PR is advantageous as it is more convenient and less expensive though it needs an internet network and compares superiorly to home-based PR in terms of supervision [10].

The appropriateness and acceptability of tele-yoga for heart failure and COPD patients were investigated in a 2015 controlled pilot research. In this controlled, non-randomized trial, tele-yoga was evaluated for eight weeks with an educational control group (information leaflets mailed to participants with one phone call a week). There were 15 participants, seven in the intervention group and eight in the control group. Participants were linked to biweekly, one-hour tele-yoga classes using internet-connected televisions and multipoint videoconferencing. The intervention was deemed acceptable and adequate by the authors; the intervention arm reported enjoying yoga and appreciating the home-based component, and participants reported a high symptom burden and social isolation. Nevertheless, technological challenges prompted some participants to suffer poor video streaming quality. YouTube contains teaching on physical postures, breathing techniques, relaxation, and meditation. This study demonstrates the acceptability and suitability of T-YT, although it was not compared to conventional YT [20].

YT has the potential to improve various aspects of COPD. A comprehensive review and meta-analysis were conducted using Medline/PubMed, Scopus, and CENTRAL databases to investigate the risks and benefits of yoga for patients with COPD (Cochrane Central Register of Controlled Trials). COPD patients were eligible if they had participated in a randomized controlled experiment assessing the effects of yoga on QoL, dyspnea, exercise capacity, and pulmonary function (FEV1%). The term "safety" refers to an incidental result. Included were the results of eleven randomized controlled studies involving 586 people. Yoga was observed to enhance QoL on the CAT (mean differences [MD]=3.81; 95% CI: 0.97 to 6.65; p=0.009), exercise capacity on the 6MWD (MD=25.53 m; 95% CI: 12.16 m to 38.53 m; p=0.001, I2=0%), and lung function on the FEV1% predicted test when compared to no treatment. Only yoga interventions that focused largely on breathing were effective, while those that also involved yoga postures were not. Few instances of negative consequences were recorded. They revealed that yoga offers considerable benefits for COPD patients' exercise capacity and lung function. Similar to the preceding findings, YT benefited in our study in terms of 6MWD and QoL in terms of SGRQ. It was determined to be safe, with no adverse occurrences documented. Unlike the last review or module, this one included breathing, asanas, and kriyas [21].

Using PubMed, Embase, Cumulative Index to Nursing and Allied Health Literature (CINAHL), the Cochrane Library and Web of Science, a second systematic review and meta-analysis on the efficacy of yoga training in COPD patients, identified 10 papers meeting inclusion criteria. Participants in the trial got yoga training, whereas the control group received standard treatment for COPD. 6MWD, Borg scale, estimated FEV1%, SGRQ, and CAT scores were among the outcomes. Yoga teaching resulted in significant improvements in patients' 6MWD, Borg scale scores, FEV1%, partial pressure of carbon dioxide (PaCO2), SGRQ, and CAT (p=0.05). The FEV1% and other spirometric measures indicated no statistically significant differences. Similar to this meta-analysis, T-YT in our study did not result in a substantial improvement in FEV1%; however, 6MWD, CAT, mMRC, and SGRQ scores improved significantly [22].

The systematic review and meta-analysis of randomized controlled trials on the effect of PR in COPD patients include studies in which COPD patients engaged in PR regimens based on yoga, tai chi, and traditional physical exercises such as walking, jogging, swimming, and cycling. At least two groups participated in the studies, with one group receiving PR and the other receiving standard treatment. All 39 trials, including 2,397 people with COPD, were included. Compared to those who received conventional treatment, patients who participated in the pulmonary rehabilitation program showed significant improvements in the 6MWD, SGRQ score, and mMRC. Similar to our study, yoga improved 6MWD without affecting FEV1% levels. Similar to the PR group, the T-PR group exhibited enhancements in 6MWD, SGRQ, and mMRC [23].

There are no substantial, well-designed studies comparing the two methods directly. In a meta-analysis, the effects of active mind-body movement therapies (AMBMT) against PR or AMBMT added to PR versus PR alone were compared in individuals with stable COPD. AMBMT includes yoga, tai chi, qigong. Low-quality evidence supports superior disease-specific QoL with AMBMT than PR in stable COPD patients. Poor-quality evidence suggests that there are no differences in dyspnea between AMBMT and PR. Evidence of moderate quality indicates that the addition of AMBMT to PR does not improve disease-specific quality of life. Evidence of lower quality demonstrates that both yoga therapy and pulmonary rehabilitation are safe, effective, and efficient strategies to treat COPD and that both can be utilized alone or as part of an integrated approach by combining their practices for the highest quality results [24].

The integrated approach of yoga therapy (IAYT) helps coal miners with COPD by reducing dyspnea, fatigue, and pulmonary recurrence and enhancing functional performance and peripheral capillary saturation (SpO2%). In this randomized, waitlist-controlled, single-blind clinical study, 81 coal miners (aged 36 to 60) with stable stages II and III COPD were included. The yoga group received a 12-week, six-day-a-week, 90-minute-per-day IAYT module for COPD that comprised asanas, loosening movements, breathing practices, pranayama, cyclical meditation, yogic counseling, and lectures. After the intervention phase and post-testing were completed, participants on the waiting list were offered the 12-week yoga program. The yoga group demonstrated statistically significant enhancements in dyspnea (p=0.001), fatigue (p=0.001), pulmonary function (p=0.001), SpO2 percent (p=0.001), and 6MWD (p=0.001) [25]. We found similar improvements in symptom scores and 6MWD but not in FEV1%. Our study is an attempt to compare a validated T-YT module with an already proven beneficial T-PR module in patients with COPD. It shows that a well-designed T-YT module can benefit similar to the T-PR module in terms of exercise capacity, symptom burden improvement, QoL, and psychiatric co-morbidities like anxiety and depression, which are common [26].

The progressive nature of COPD, distance issues, and the COVID-19 pandemic have put the onus on the ever-expanding role of tele-interventions in these patients. As mobile technology increases its reach to far-flung areas and internet connectivity improves, the role of these tele-interventions is destined to expand.

Our research is restricted in various ways due to the fact that it is a pilot study conducted at a single location with a small sample size.

Our preliminary pilot study using a validated T-YT module demonstrates that a three-month T-YT is comparable to a T-PR in terms of exercise capacity, symptom scores, SGRQ, PHQ-9, and GAD-7. Additional research with a larger sample size is necessary to verify these findings. However, because T-YT is simple, inexpensive, and risk-free, it has the potential to be adopted as part of non-pharmacological therapy in COPD patients.