Besides various advancements in technologies, cardiac surgeries are associated with various pulmonary and psychological consequences. In this article, we describe the case of an elderly female patient who presented to the emergency unit with complaints of severe chest pain, breathlessness, and sweating. She was diagnosed with triple vessel disease and underwent coronary artery bypass graft (CABG) surgery. Post-operatively she was anxious, restless, and complained of pain and difficulty in breathing. For which a comprehensive tailor-made rehabilitation program was designed by the Cardio-Pulmonary Physiotherapist, which included cardiac rehabilitation along with psychological rehabilitation, which proved to be effective in substantial gains in both physical and mental wellbeing. This provides a pathway towards the treatment planning and aspects of patient problems that should be focused on, along with an effective day-wise protocol to improve patients’ symptoms using both physical and mental perspectives. The patient was assessed using various outcome measures, which revealed drastic changes in breathlessness, depression, anxiety, pulmonary capacities, and overall quality of life. We conclude that anchoring psychological rehabilitation to cardiac rehabilitation will provide effective management and improve the overall quality of life of such patients and healthcare burden.

Despite the numerous possibilities for managing coronary artery disease, coronary artery bypass grafting (CABG) is indeed an avenue with precise indications and good mid- and long-term results, which enables patients to experience therapeutic benefits and contributes to an increase in life expectancy and overall quality of life [1]. The CABG surgery presents satisfactory results; however, sternal pain, and dysfunctional breathing in the postoperative period, resulting in decreased cough efficiency due to fast and superficial breathing and can result in post pulmonary complications (PPCs) such as atelectasis [2].

Aside from that, mood disorders, weakness, worry, stress, and depression are common psychological repercussions, all of which are disabling and distressing [3]. Hyperventilation is a common reaction to emotional extremes such as fear, anxiety, or stress [4]. Patients exhibit feelings such as fear, anxiety, and worry as soon as they are informed of the procedure's necessity. Furthermore, a hospital stay is known to bring discomfort, tension, sadness, unease, boredom, pain exacerbation, and anxiety [5].

The prevalence and persistence of depression and anxiety in such patients can have a direct impact on involvement in cardiac rehabilitation and lifestyle modification programs highlighted an association with increased risk of morbidity in the short and longer term. Reduced breathing exercises that modify carbon dioxide tolerance have been shown to provide therapeutic advantages to patients suffering from anxiety and depression, according to studies [6]. Corroborating the findings of this study presented herein, the Buteyko breathing technique helps in reducing breathing to cause air hunger, which is equivalent to giving the body a small, controlled dose of symptoms, which can be a great tactic for overcoming the fear of the sensations that come with a full-blown panic attack and restoring normal breathing volume by resetting the respiratory centre [7].

Physiotherapists are crucial in the preparation and rehabilitation of patients who have had surgical procedures especially in the immediate post-operative period. Aside from possessing a vast arsenal of techniques, incorporating rehabilitation for psychological elements at this time can be crucial and will provide effective management and improve the overall quality of life.

A 66-year-old female with a known case of hypertension from 20 years presented to the medical emergency unit with complaints of difficulty in breathing at rest, sweating, and retrosternal chest pain and tightness, which was subtle at the beginning and eventually evolved in nature. Following examination, ECG was done suggestive of unstable angina and incomplete right bundle branch block (RBBB), and first-line medical management was given. She has been advised admission to the Cardiac unit for angiography, which reveals coronary artery disease-triple vessel disease (CAD-TVD). Following a series of tests, she was diagnosed as a case of CAD-TVD, grade III right-sided medical renal disease, and type II diabetes mellitus (HbA1c - 6.9%). She had off-pump CABG surgery via median sternotomy using a saphenous vein graft. She was then shifted to CVTS ICU and referred for physiotherapy on a post-operative day one (POD).

A physiotherapist visits the patient in CVTS ICU on POD one; she was on six liters of oxygen support via a simple face mask. She was anxious, nervous, and restless and complained of difficulty in breathing and pain over the suture site. On inspection, the central line, femoral line, foley catheter, and retro sternal drains were in situ. On cardiovascular examination, pulse rate was 110 beats/minute and blood pressure of 118/77 mm Hg, and S1 and S2 sounds were heard during auscultation. On respiratory examination, there was an increased respiratory rate, 24 breaths/min with 98% oxygen saturation on six liters of oxygen per minute. During the examination, the chest wall movement was diminished, and so was the engagement of the auxiliary muscles of inspiration in a dysfunctional pattern. Auscultation revealed bilaterally reduced breath sounds with mild crepitation throughout the lungs.

Table 1 discusses the timeline of the current episode.

Table
1: Timeline of the events with their findings and treatment given. 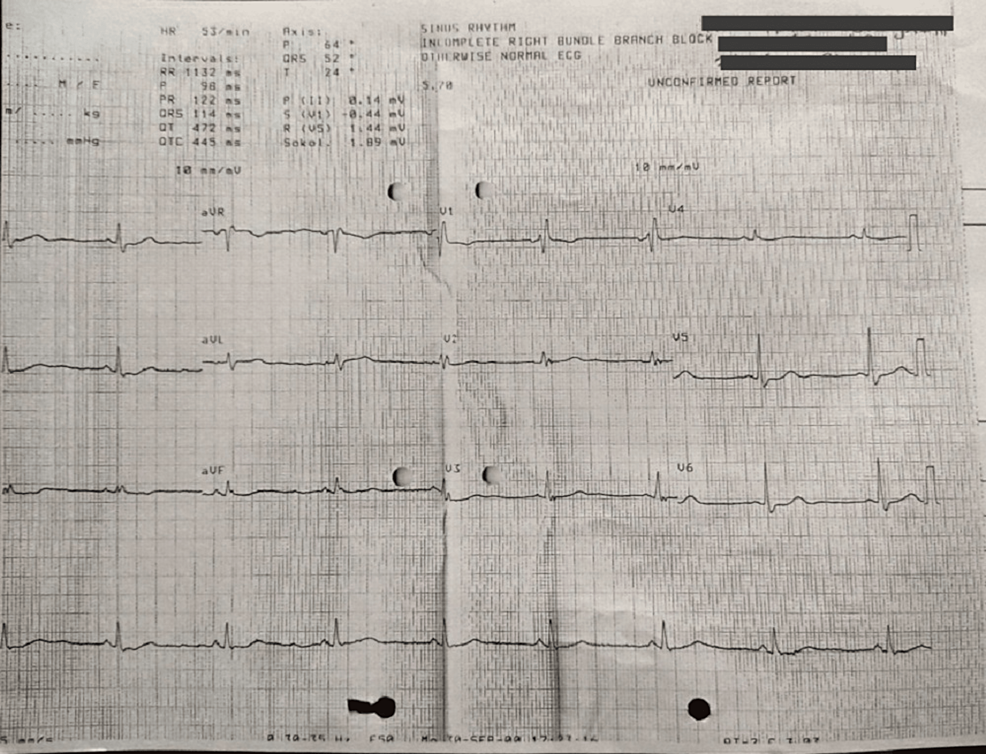 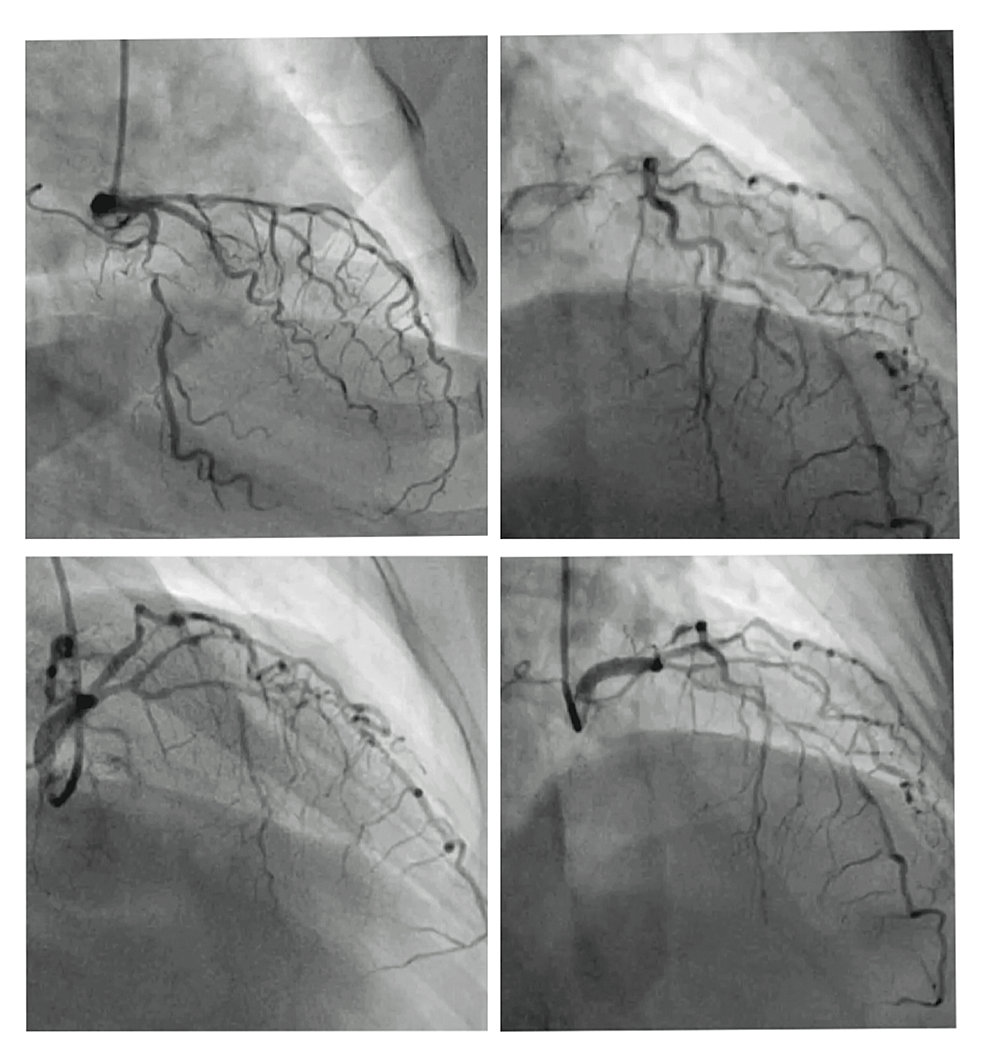 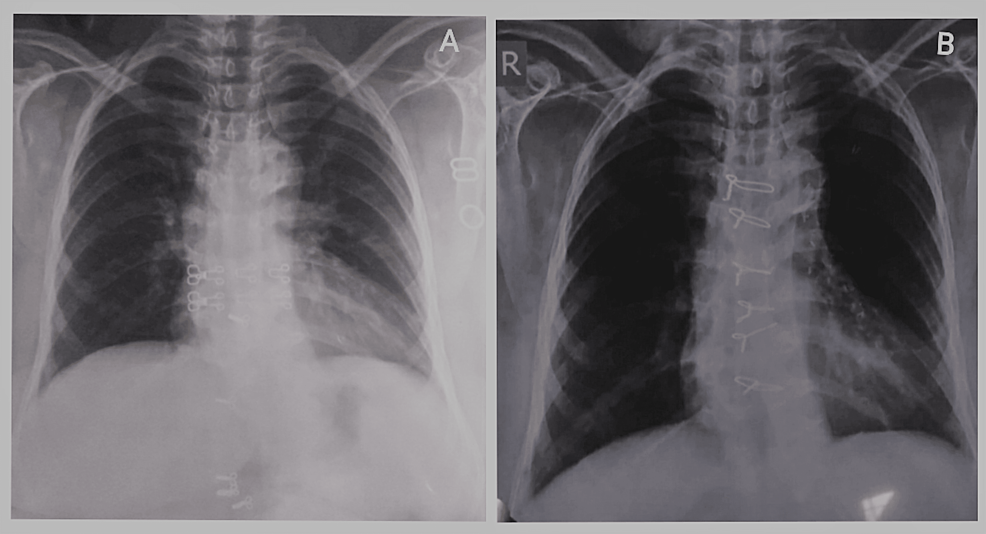 The patient was visited by a physiotherapist twice daily, monitoring and examination were done regularly, followed by rehabilitation sessions, and the outcomes were documented weekly. The patient's objective was to ease dyspnoea and let her return to her everyday tasks and spiritual activities (visiting the temple and praying). While keeping the patient's goals in mind, our goal was to alleviate dyspnoea, reduce discomfort and anxiety, improve breathing, promote relaxation, and improve overall functional status. Physiotherapeutic interventions were given to the patient for two weeks, the first week in CVTS ICU and the second week in the CVTS ward (Tables 2, 3).

Follow-up and outcome of the intervention

The outcome measures that were used to assess the progress of the patient on the first day of referral and the day of discharge are shown in Table 4. The patient was discharged with a set of exercise programs consisting of a self-monitoring technique for vitals and recognizing red flags, sternal precautions, and exercise guidelines with a daily activity tracker that the patients do at home to regain her strength and progress toward her goals. Along with this regimen, she was asked to perform breathing retraining and hygiene daily and to follow the relaxation, and dyspnoea relieving approaches whenever need be. Dietary requirements include a low-fat diet with normal salt intake and sugar as per diabetic status and to maintain ideal body weight. She was also advised to follow up after two weeks and can contact her telephonically for any doubts about the treatment or her condition. Good outcome of rehabilitation appears to be highly linked to patient satisfaction. She was very much satisfied with the prescribed protocol. She was hopeful and receptive during the treatment session, pleased with her development, she was willing to continue as long as advised.

Table
4: The values of outcome measures used to evaluate the progress of the patient.

Cardiac rehabilitation speeds up the recovery by preventing or resolving to post pulmonary complications and restoring to premorbid level. The physiotherapist is one of the professionals that spend the most time with the patients. As a result, it is proposed that time be better used by allowing specialists to clarify patients' doubts and lead them through the new scenarios they would confront. The high rates of anxiety and depression following heart surgery underline the importance of early detection, support, and management. Incorporating psychological intervention into an existing cardiac rehabilitation program will help in reducing pain, severe anxiety, hostility, and depression and thus improve quality of life as well [8].

To evaluate the efficacy of the treatment provided to the patient, outcome measures were used such as New York Heart Association to assess dyspnoea, Nijmegen Questionnaire was used for hyperventilation along with arterial blood gas analysis, General Anxiety disorder-7 and Patient health questionnaire-9 used for quantifying anxiety and depression respectively. All the scales/questionnaires were filled on the first day when the examination was done, on the day of discharge, and on the day of follow-up, the difference between the scores showed a whopping improvement on every scale.

The progress seen in the increasing walking distance motivated the patient to improve her respiratory capacity and stick to the protocol. The psychological consequences, the tendency of the patient to slouch, and forgetting to keep her posture straight, which might also be due to pain at the suture site, were the difficulties faced during the management of this patient.

Although the patient did not fully recover during the rehabilitation program, the majority of the therapeutic goals were met, including improved breathing pattern, increased functional vital capacity, reduced pain, anxiety, and depression, improved chest expansion, and self-efficacy after two weeks of intensive cardiac and psychological intervention.