Airofit PRO Review: Modern cycling and bike racing is all about watts. It’s what we obsess about. But before watts there was VO2 max or maximal aerobic capacity, which is a measurement of the maximum amount of oxygen your body can effectively use during exercise. As such, it’s a good benchmark for measuring your aerobic fitness level. For endurance athletes (like cyclists), it’s another way to assess fitness and measure progress/improvement over time. Cyclists with high VO2 max include Greg LeMond (92-94 mL/kg/min), Miguel Indurain (88 mL/kg/min), and Chris Froome (84.6 mL/kg/min). By comparison, most mere mortals (in this case, trained men so not couch potatoes) are more like 50-70 mL/kg/min. You can increase your VO2 max via high intensity intervals and/or sweet spot training (both pegged to your FTP so training to power). But what if you could achieve the same benefits in 5-10 minutes a day in the comfort of your home without breaking a sweat? That’s what the Airofit PRO promises. 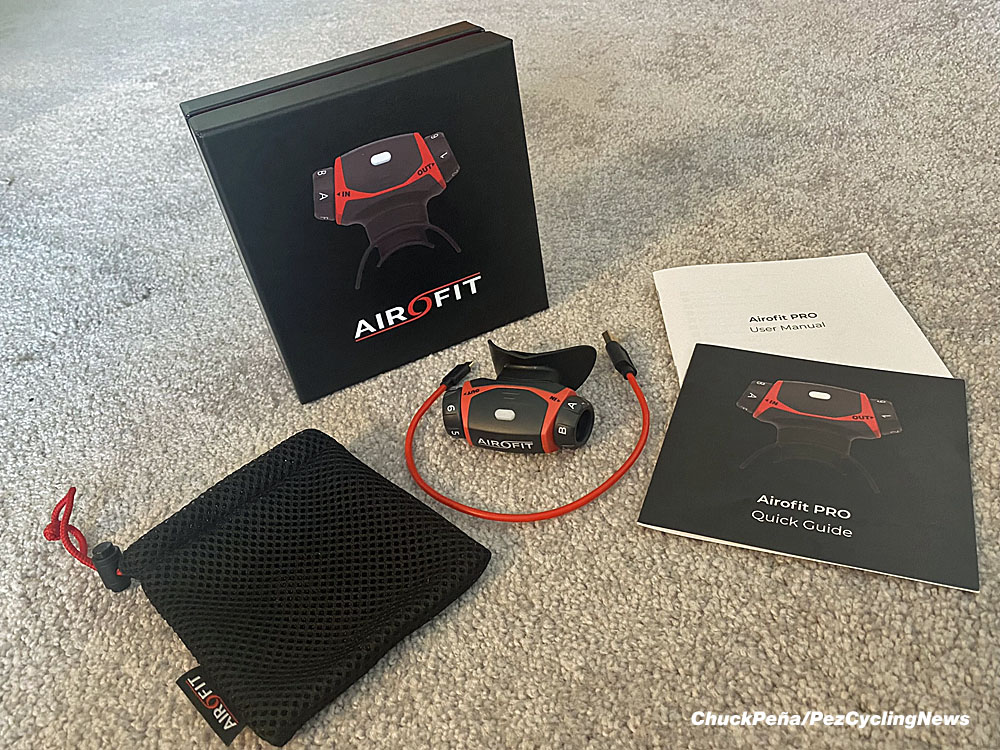 We take breathing pretty much for granted. As Menachem Brodie previously pointed out:

Menachem’s article focused on breathing as part of recovery and he recommended 3 minutes of focused, purposeful breathing after workouts.

But if breathing as part of recovery is important, what about actually training your breathing?

In contrast, the anti-training argument largely sums up to:

My scientific and practical take on this argument is decidedly down the middle. While the physiological benefits are not clear in the literature, it is absolutely the case that breathing is such a primal urge that any respiratory discomfort can greatly increase the perception of effort.

Conscious awareness and control of breathing has also been used forever for controlling anxiety and emotions. One of my favourite studies in this area compared a group of typical university control with a group of elite ultra-endurance adventure racers to a sudden “aversive respiratory stimulus” – i.e., restricted breathing (Paulus et al. 2012). While both groups perceived similar levels of discomfort, the racer group maintained their cognitive capacity versus a large drop in the control group. As applied to respiratory training, studies like this suggest that there’s a further potential for maintaining awareness and decision making during hard efforts.

Before we see how Chuck used and found his experience with Airofit, here’s some basic terminology to understand as you use Airofit or start learning about respiration:

Tidal Volume (VT). How much air you take in per breath, in millilitres (mL).

Respiratory Frequency (RF). How many times you breathe, per minute (bpm).

Forced Expiratory Volume (FEV1). How much air you can exhale in one second, in litres (L).

Minute Ventilation (VE). How much air you breathe in per minute, in litres (L).

For a more detailed discussion into respiratory physiology and training, check out this Fast Talk Labs podcast episode that I was part of along with coach Steve Neal. 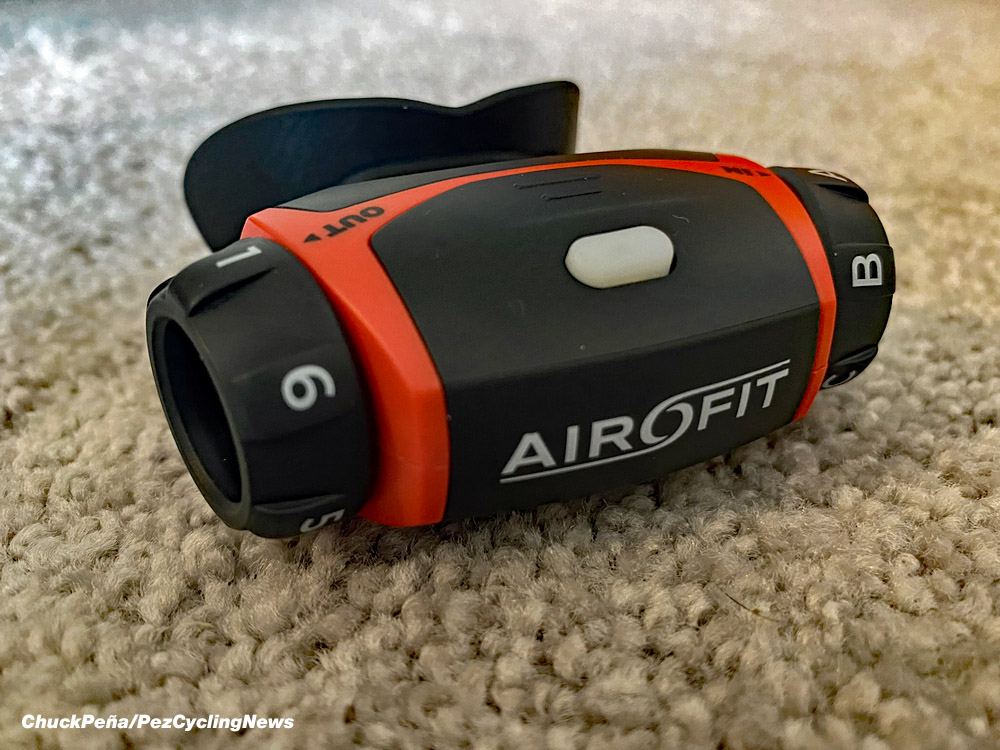 Airofit is a training system that consists of the Airofit Pro training device and associated free (iOS or Android) training app (the Airofit Active is a simplified version of the AiroFit PRO and sells for $129, but the Active does not have Bluetooth connectivity so you don’t get progression tracking or live feedback on how you are performing the training sessions). 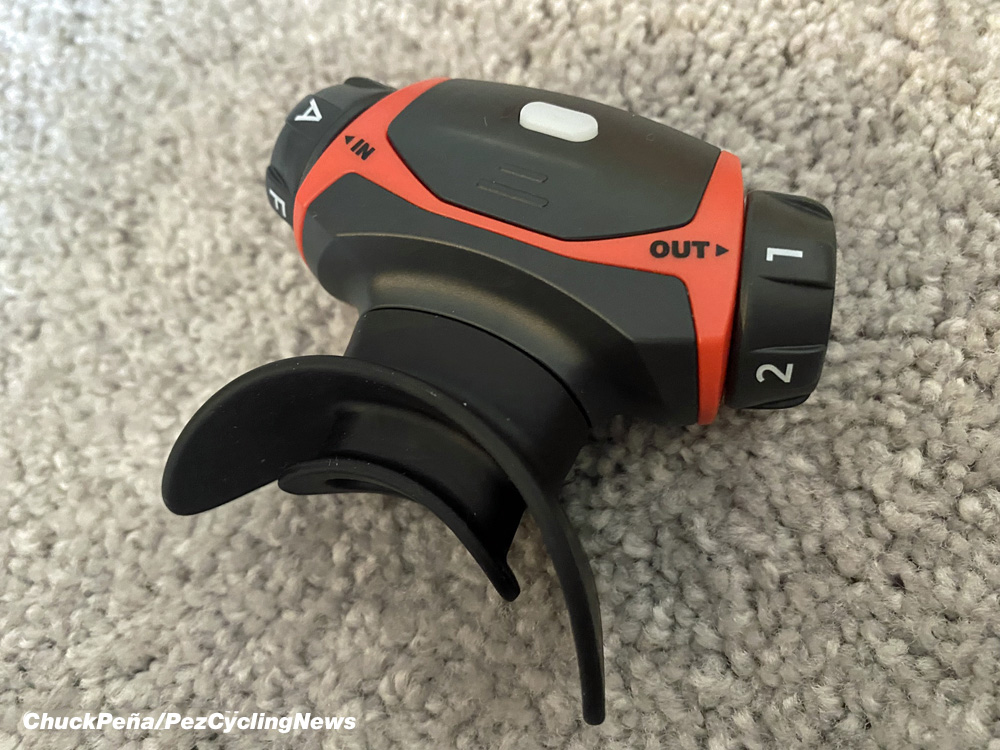 Before you can use the AiroFIT PRO you’ll need to charge what Airofit calls the E-Unit, which is the black piece with the Airofit logo and the on/off button. Remove the E-Unit by gently squeezing the top and bottom to pull it off. The charging port (micro USB) is on the inside of the E-Unit. If the light is blinking green, that means the cable is attached correctly and the E-Unit is charging. When the light turns solid green, the E-Unit is fully charged. 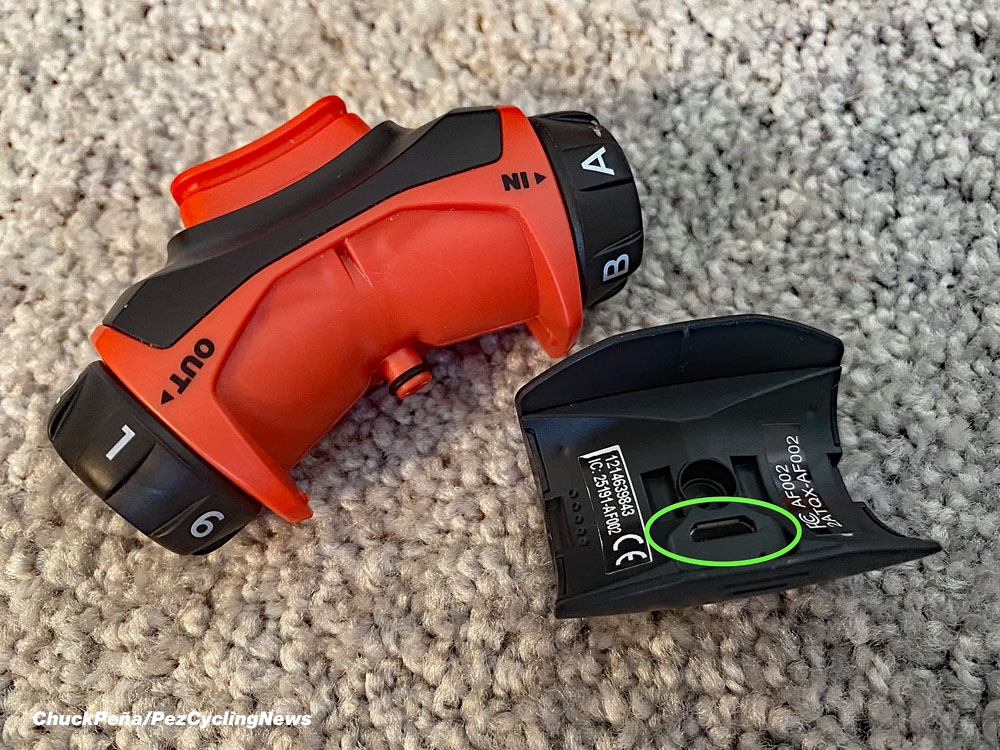 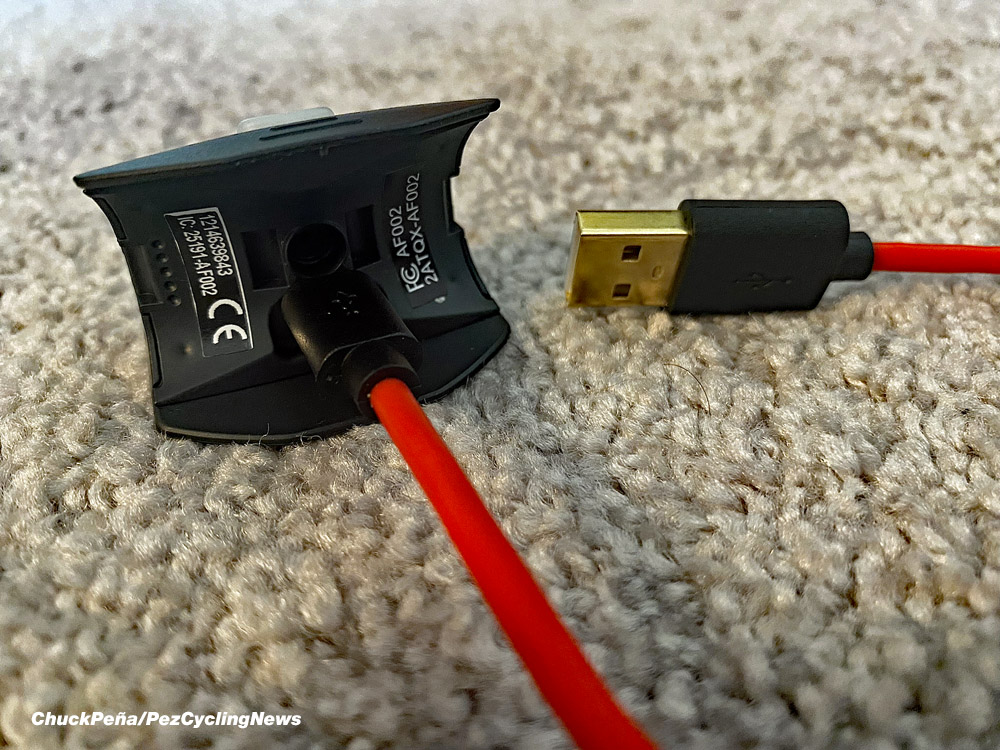 But you’ll have to decide if you want to spend money for these added premium features after a month:

Finally, you’ll need to decide which of the two mouthpieces to use. There’s no right or wrong choice. It’s personal preference. Some prefer the Simple version, while others like to hold the trainer tighter between their teeth with the Advanced version. I opted for the Advanced. 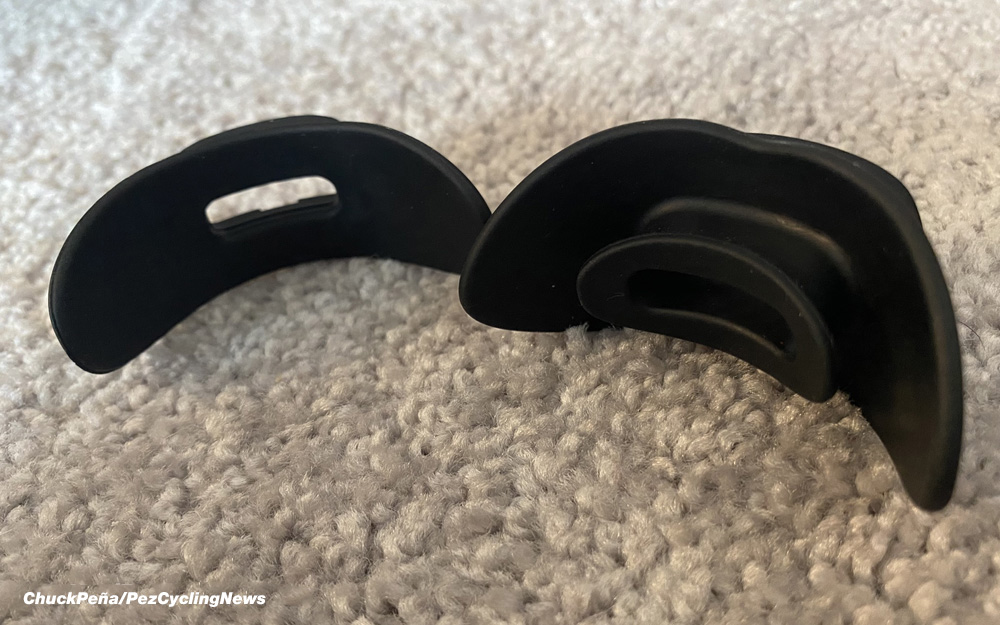 Not quite a scuba mouthpiece, but you can choose between Simple (left) and Advanced (right)

At this point, you’re pretty much go-to-go to start training with the Airofit PRO. 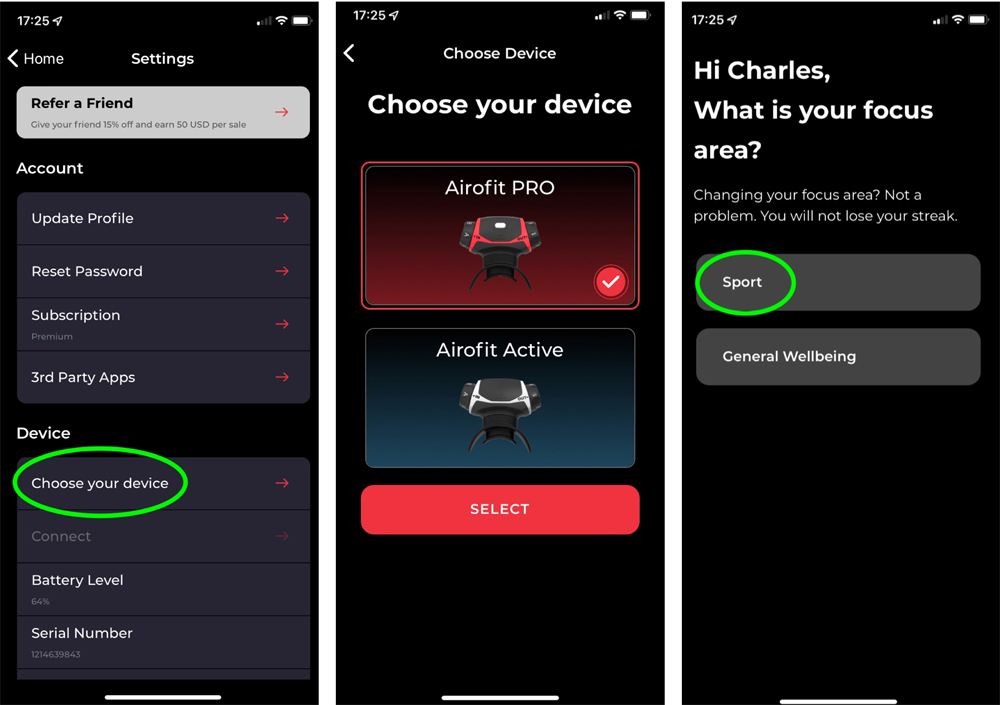 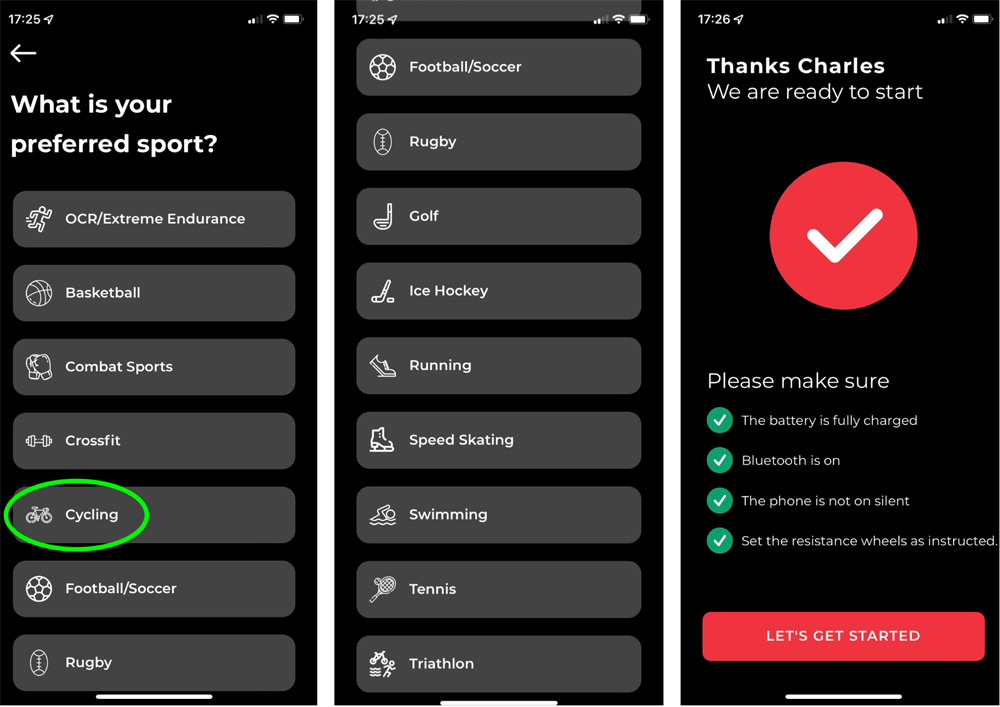 Based on your profile and your focus area, the app will pick breathing exercises for you

I won’t cover everything about the Airofit app and training with it, but hopefully enough to give you an idea of what’s involved.  Put simply:  Just follow the instructions for each breathing exercise as they appear on the app (you can also set the app to hear the instructions and have background music).

The first thing you do before every training session is take a lung test that measures air volume, inspiratory power, and expiratory power. I’ll let screen shots do the talking. 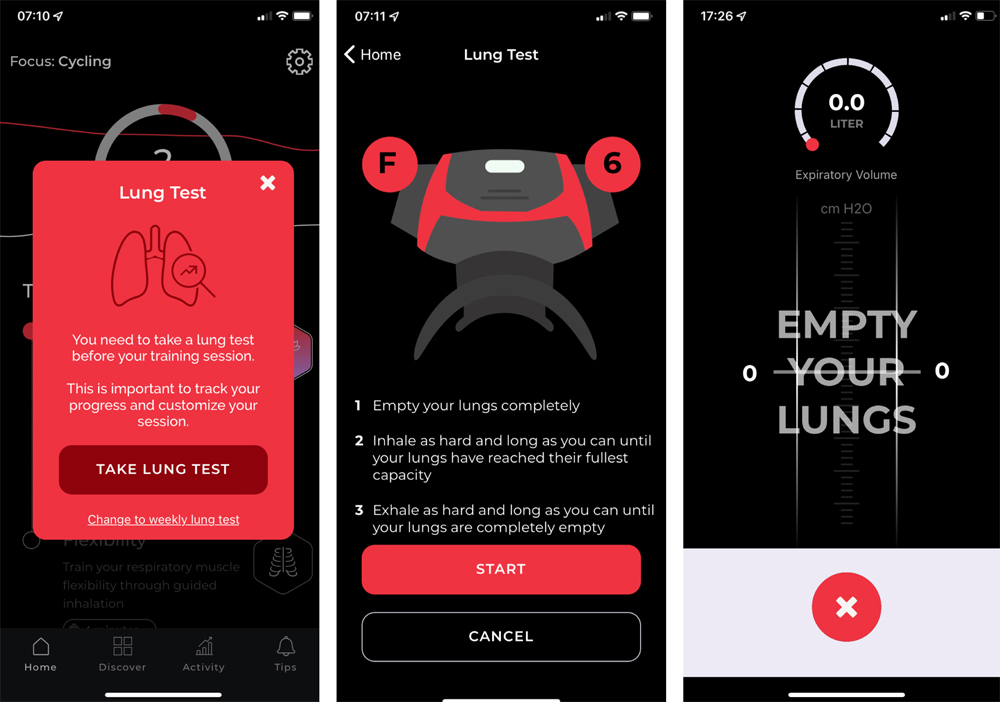 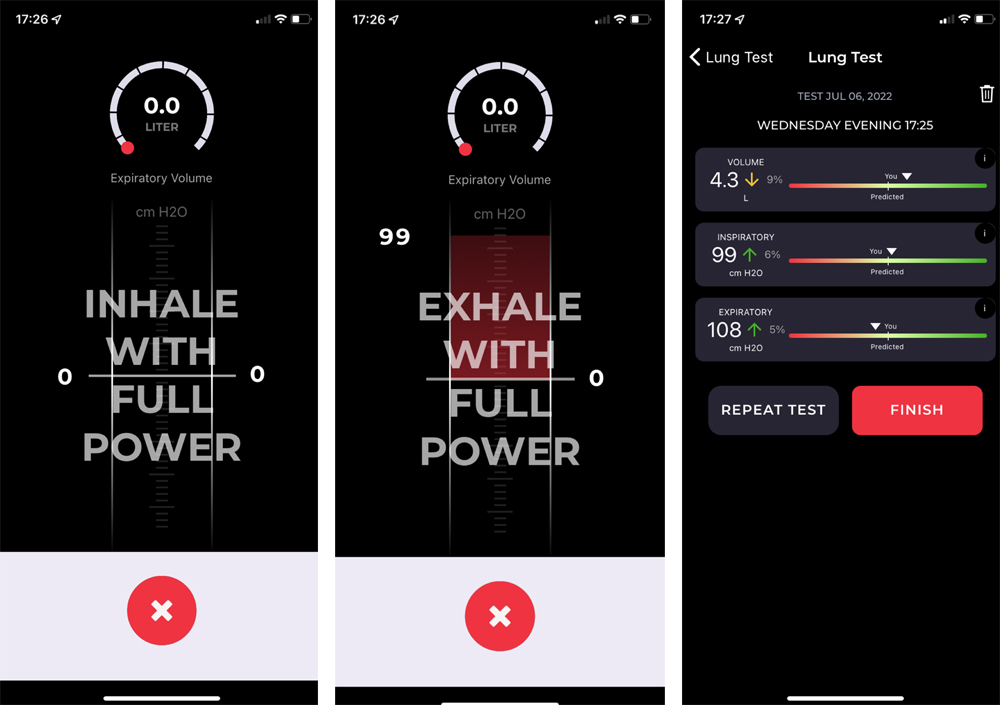 The app then walks you through a series of breathing exercises. Again, just follow the instructions as they appear on the app, i.e., set the IN and OUT valves to the appropriate resistance, inhale, exhale, hold your breath, etc. 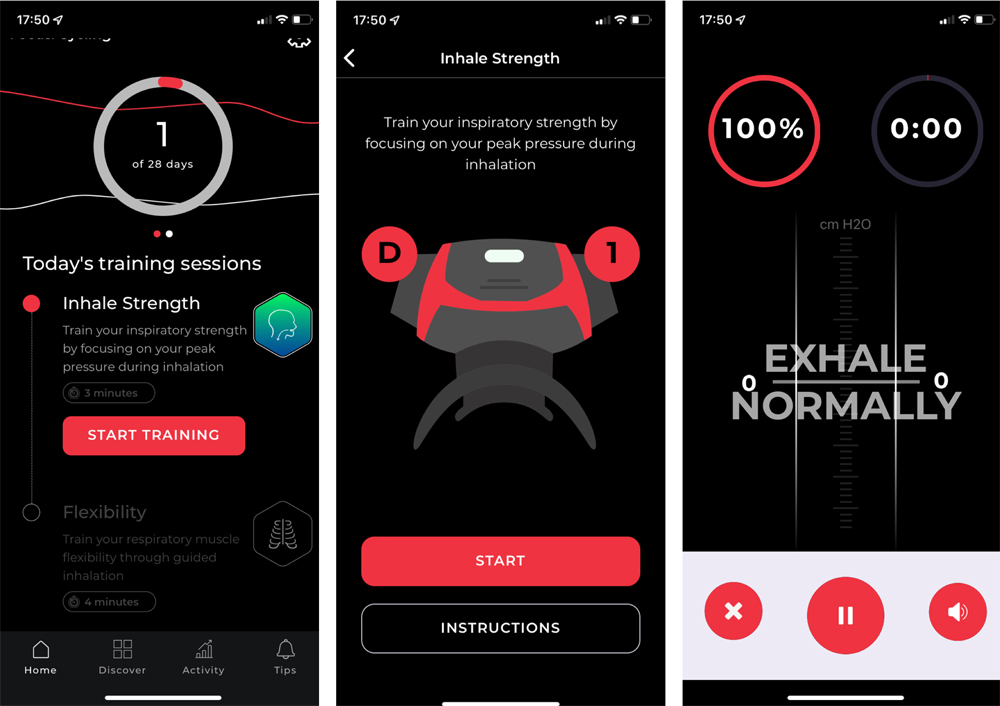 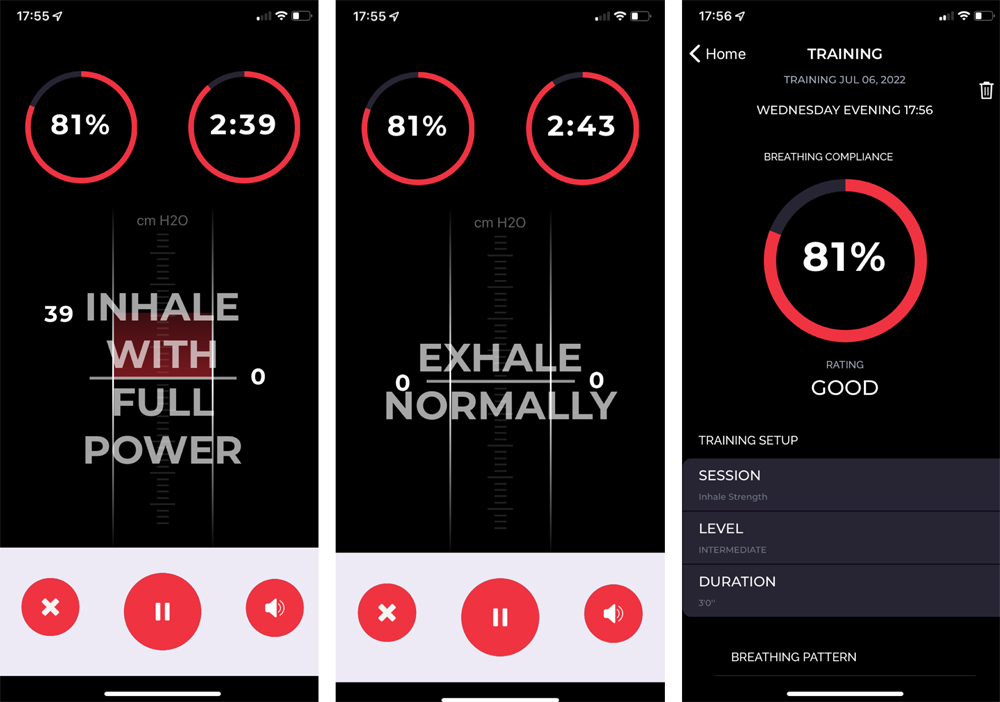 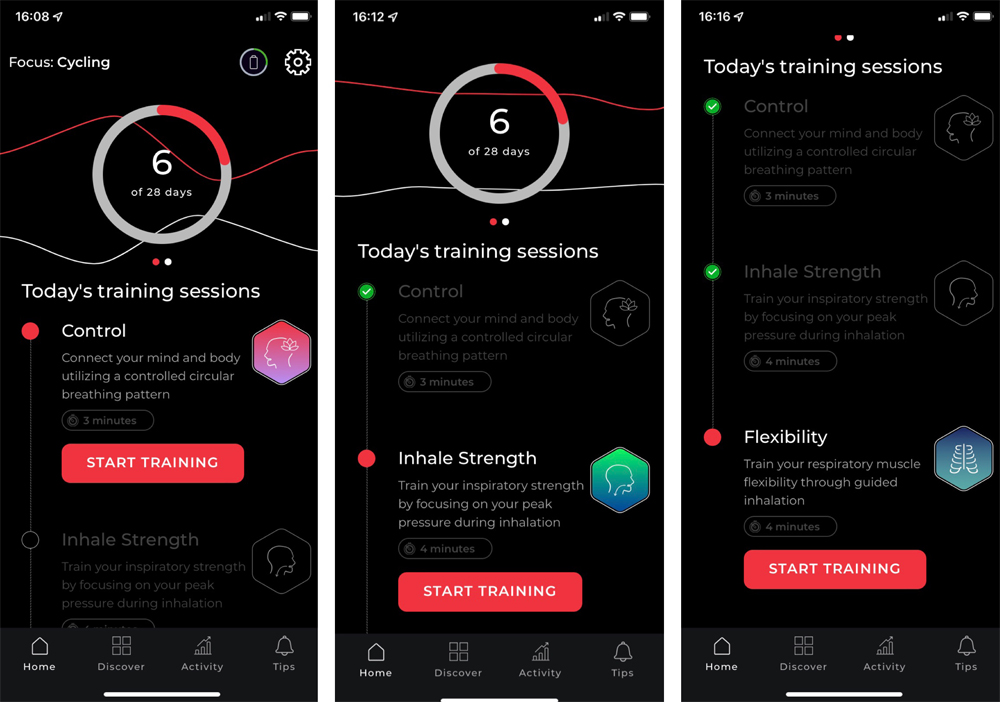 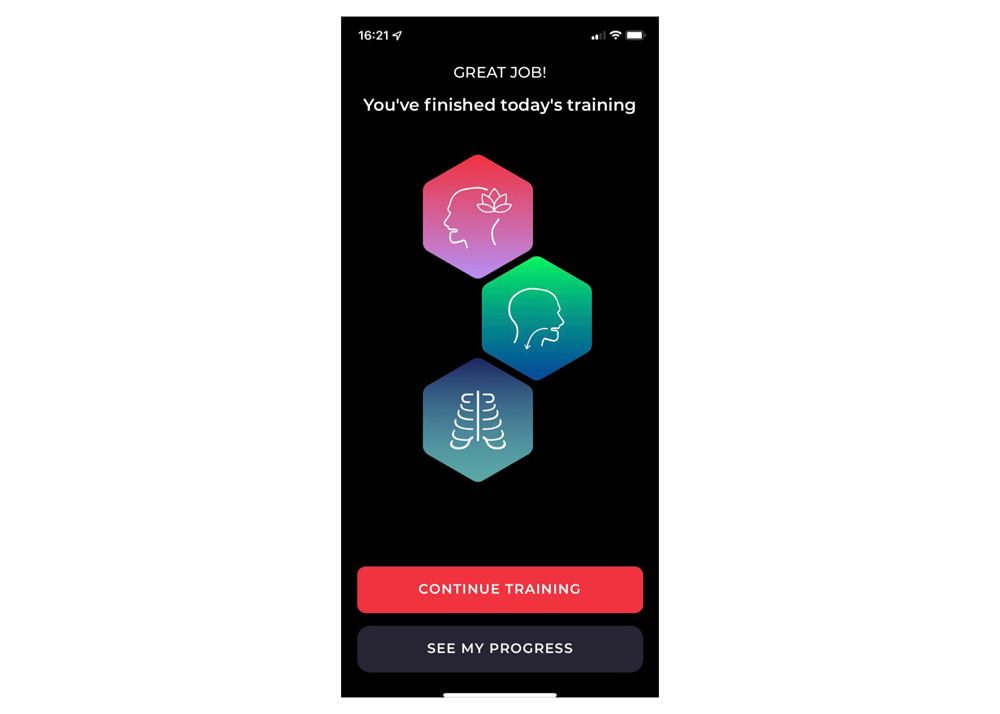 Does it really work?

Airofit recommends daily training.  5-10 minutes is all you need. Amongst the benefits that Airofit claims: 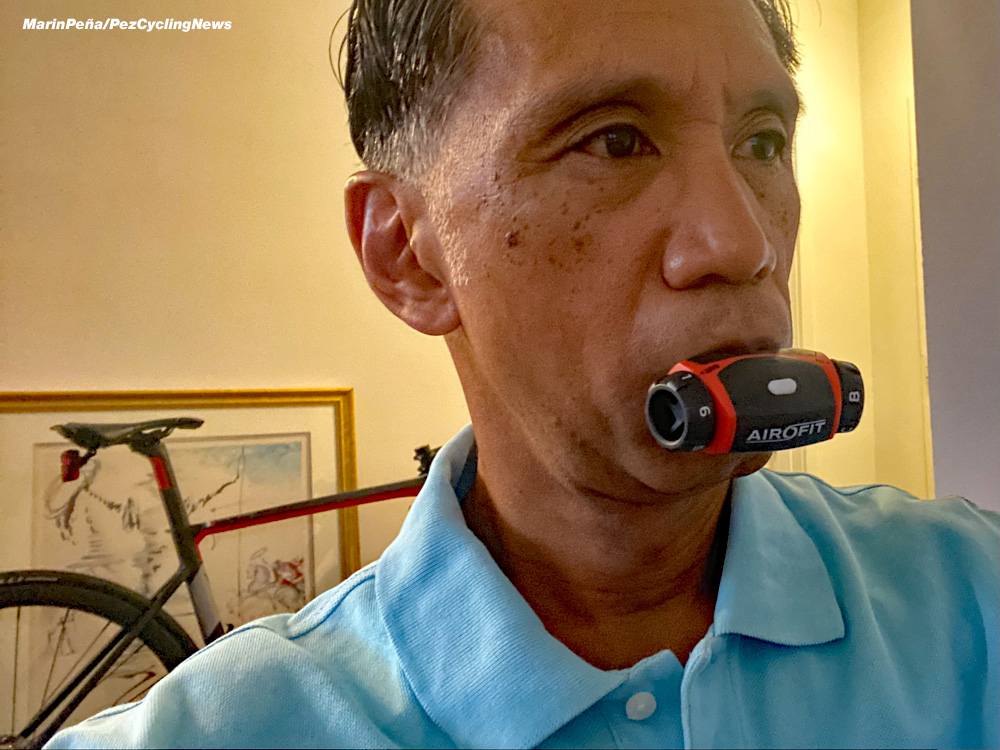 If you can breathe, you can train with the Airofit PRO

According to one study where 68 people were divided into 3 groups and spent 8 weeks training with different resistance levels:

I’ve been using the Airofit for 2+ months. But haven’t been as good as I should be about consistency, i.e., using it every day. I tend to be better using it during the week incorporating into my morning routine of stretching and measuring my heart rate variability. I’m kind of “lazy” about my whole morning routine on weekends — even though I’m not necessarily sleeping in. And I had ~3 weeks where I didn’t use the Airofit PRO at all because I was too busy with packing up our old house and moving to our new house (some 600 miles away).

Nonetheless, per the stats that Airofit tracks, I’ve shown improvement: 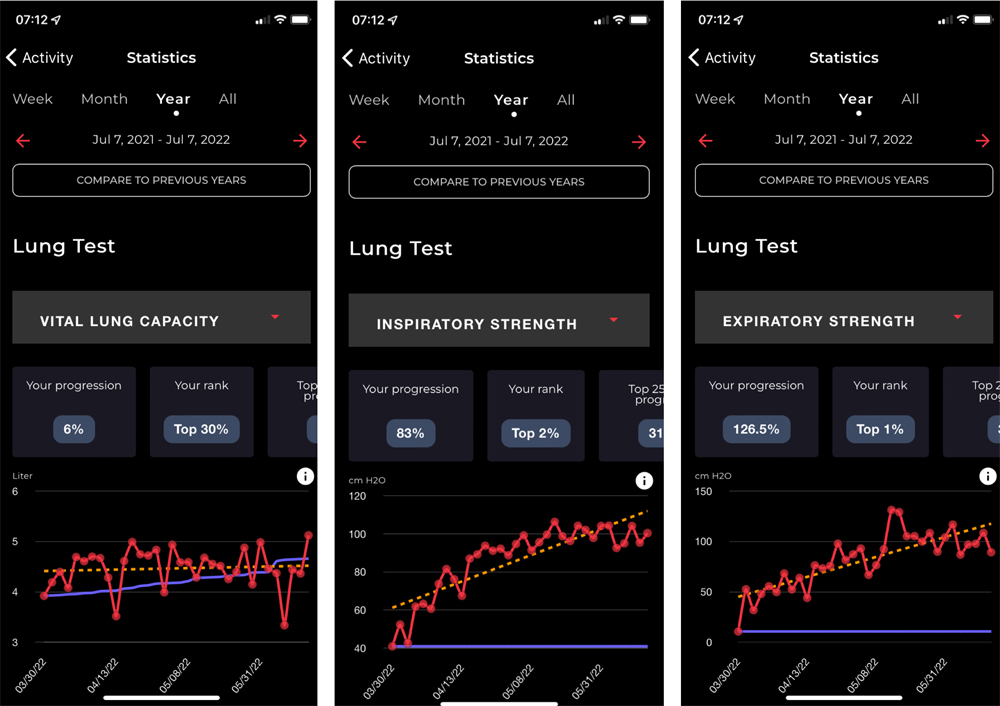 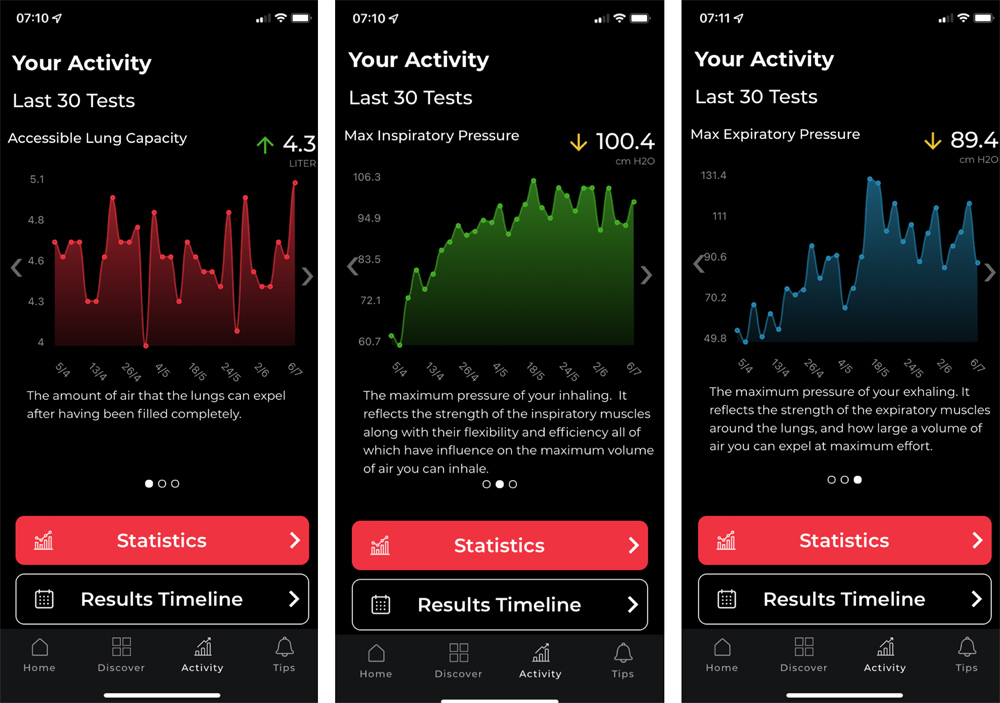 Anecdotally, I can say that my breathing seems easier during harder efforts.

And I’ll throw this out there as other pieces of anecdotal evidence. I mentioned that I was off the bike for 3+ weeks because of moving. As such, I fully expected to be way, way behind the power curve when I came back. But …

So I know all of the above is anecdotal. And I’m certainly not going to claim cause-and-effect. But I’m willing to believe that there’s a correlation of sorts between the benefits of training with the Airofit PRO and being able to ride as well as I did after a 3+ week layoff. As Menachem Brodie pointed out, a lot of us are willing to spend $$$ on all sorts of fancy gadgets for our training. If you fall into that category, you should put the Airofit PRO on your gadget list. 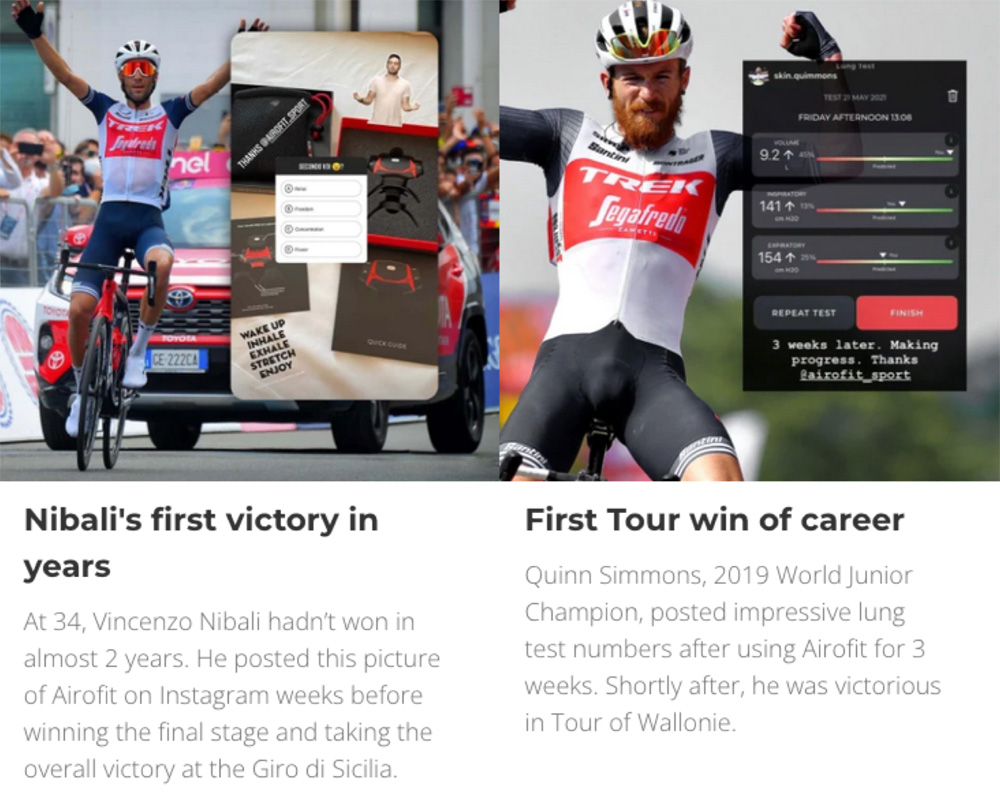 I’m a piker, but these guys are the real deal

Note: If you have other experiences with gear or something to add, drop us a line. We don’t claim to know everything (we just imply it at times). Give us a pat on the back if you like the reviews or a slap in the head if you feel the need!

PezCycling News and the author ask that you contact the manufacturers before using any products you see here. Only the manufacturer can provide accurate and complete information on proper/safe use, handling, maintenance, and or installation of products as well as any conditional information or product limitations.


Like PEZ? Why not subscribe to our weekly newsletter to receive updates and reminders on what's cool in road cycling?