SportTechie’s Sandbox is where we share our experiences testing products, gear, solutions and more in the sports tech space. Have something you want us to get our hands on? Pitch us at [email protected]

The memory, from more than 30 years ago, remains vivid. I’m sitting on the exam table in the pediatrician’s office when Dr. Berman gives me a plastic spirometer and a challenge.

As a mild asthmatic with below-average lung capacity, exhaling powerfully enough to push the red gauge up to the expected level for a child of my age and height is daunting. But Dr. Berman, with a gleam in his eye, looked toward my mother and then back at me and said, “Your mom will take you to McDonald’s on the way home if you can reach the bottom of the normal range.”

Those fries never tasted so good.

This was the recurring flashback for me as I trained with the Airofit Pro the past couple of weeks. The breathing trainer, a

Airofit measures the force and volume of someone's inhalation and exhalation.

“Dumbbells for the muscles in your lungs,” says Jacob Mathiesen, Airofit’s head of marketing and sales. While the medical world often uses the term vital lung capacity to define the quantity of air a person can breathe, Airofit prefers the counterpart concept: accessible lung capacity, or ALC.

“That's the size of the balloon that you have,” Mathiesen says of VLC. “However, we're not using the full lung capacity in any aspect—nobody’s doing that. So the ability to use a bigger portion of your VLC, that's what's interesting.”

Airofit, a Danish company, has seen a particularly high adoption rate among elite cyclists, including a number of the elite riders who will be forming the peloton for the Giro d’Italia that begins today. Of particular note is Italian legend Vincenzo Nibali, who twice won this race as well as the 2014 Tour de France. In fall 2021, 36-year-old Nibali posted an Instagram story about his use of Airofit prior to winning the Tour of Sicily, his first significant victory in a couple years.

Airofit recommends users do a daily lung test to form a baseline and track progress, followed by a minimum of six minutes of exercises. An intake form helps cater the program, and for my profile—late 30s recreational runner—I was directed to do two minutes of inhale strength training followed by four minutes of either exhale strength training or what’s called flexibility training, which includes prompts to exhale completely and hold my breath for a time. The goal is, in part, to improve the flexibility of my diaphragm and thorax joints, which can help reduce breathing rate and conserve energy.

My initial lung test would have made Dr. Berman shake his head: a 2.2-liter total volume and a graph indicating how far below-average I was. My inspiratory and expiratory rates—measured with the unit of cm H2O—were 104 (average) and 81 (below average), respectively. 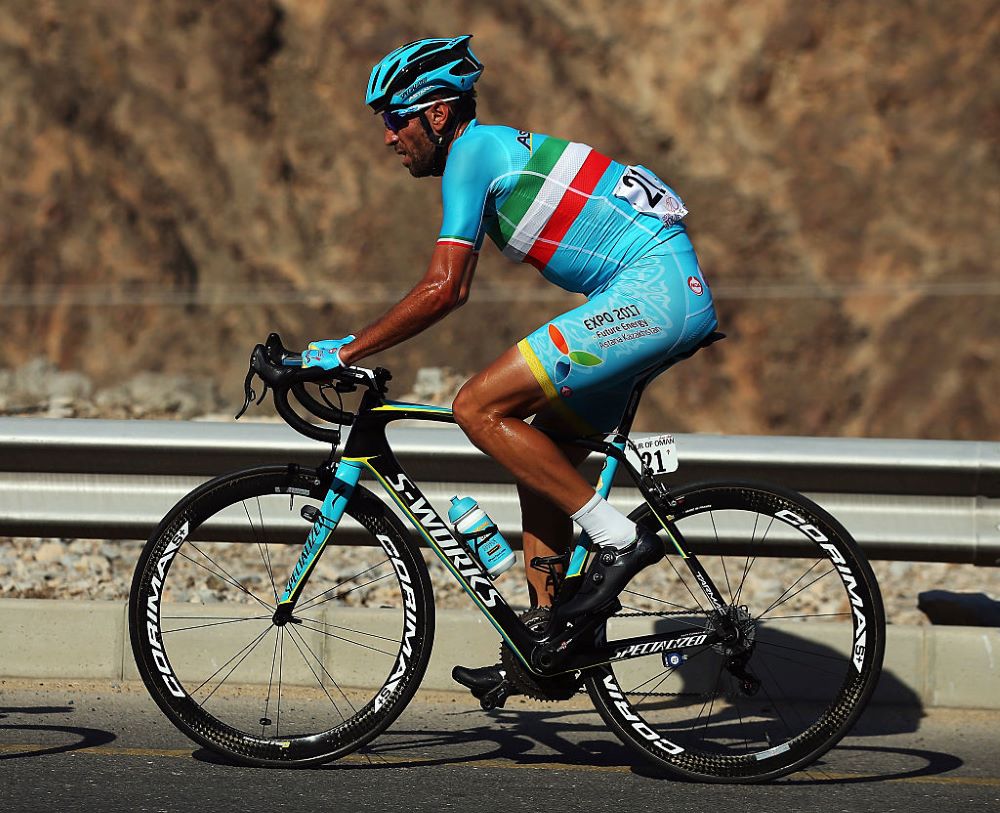 Elite Italian cyclist Vincenzo Nibali has credited Airofit for helping him win the Tour of Sicily in the fall of 2021.

Two weeks later, I had made remarkable strides. Most notably, my total breath volume reached 5.3 liters while my inspiratory rate creeped up to 111 and my expiratory rate improved roughly 50%, to 120. (Mom, if you’re reading this, I now prefer Shake Shack to Mickey D’s.) For context, my 5.3 L was barely above average and still only half of the 10.7-liter lung capacity shared by American cyclist Quinn Simmons last year.

Part of my improvement wasn’t just the impact of my physical training but my heightened understanding of how to breathe and how to do the test, which in itself is a valid skill. I also should add the caveat that I began my Airofit training about four weeks after a COVID infection and thus didn’t have a proper pre-COVID baseline.

''Dumbbells for the muscles in your lungs''

While my bout was very mild—felt like a minor cold, thanks to vaccinations and a booster—my Whoop data showed that three weeks following a full recovery, my resting heart rate was still about 5 bpm faster on average than it had been pre-Covid. That elevated resting heart rate resolved itself during my two weeks of Airofit training, and I’m not qualified enough to know whether that’s an irrelevant detail or a confounding variable.

Regardless, my early results were encouraging, and the continued training ought to help my running endurance and allow me to run at the same pace but with a lower heart rate to do the same work. It’s preliminary and anecdotal, but I could feel myself engage my diaphragm better while using the device.

“The majority of us are upper chest breathers,” Mathiesen says, before outlining the shape of one’s lungs on a video call. “There is much more volume in the lower part of the lungs than in the top part of your lungs.” The consequence of upper-chest breathing, he adds, is that the exhausted athlete doesn’t efficiently allocate his remaining energy. “Let’s say you're a biker,” he says, “and you're riding fast on the bike and you're getting our breath, you start breathing more, and more and more of your percentage of your energy is used by breathing, meaning that there's less for your locomotive muscles in your legs and your arms.” 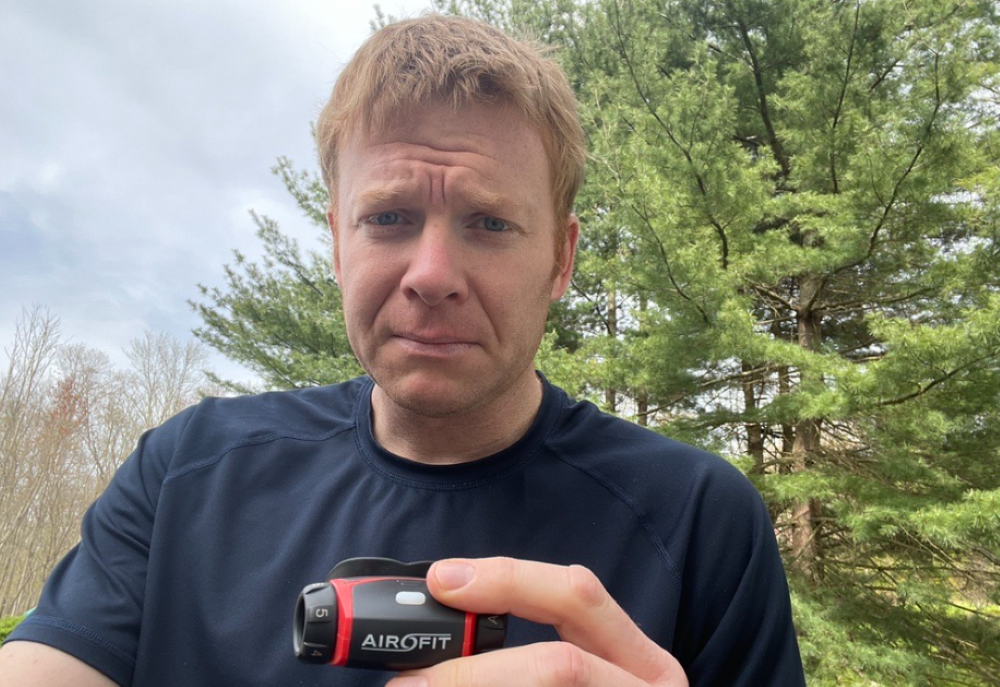 SportTechie Senior Writer Joe Lemire has a hunch Airofit may have helped improve his endurance after a mild bout with COVID.

There is a growing body of knowledge of the power of breathwork, not only for athletic performance but also for mental health and its ability to calm nerves and mitigate anxiety. For now at least, Airofit is remaining focused on the market for physical performance, albeit with the other incidental benefits. “The problem is, if you go too broad, you won't be specific enough for anybody,” Mathiesen says, noting that his two sons are accomplished wrestlers who have used the exercises to regulate emotions.

“If they are nervous, you're going to lower their heart rhythm, and they can get into a focus,” he adds. "And if they are low on on energy, it's the same thing: you could use breathwork to get yourself pumped up for the next thing. So you can control your energy levels, so to speak, when you go into a match.”

Airofit succeeds in teaching these skills through its app, with clear verbal cues and also a compliance score that gives real-time feedback for how well I was doing each exercise. Even though I haven’t yet trained long enough for significant physical improvement, I already feel more cognizant of my breathing patterns and am taking more controlled breaths while out on my runs. At this age, I may not be receiving fast food bribes for lung capacity, but I know that, the more I run, the better I can justify ordering a big juicy burger for dinner. All roads lead to the same destination.