Medicine will have a watershed after the appearance of covid-19

Posted by: admin Categories: PULMONARY DISEASES
Comments Off on Medicine will have a watershed after the appearance of covid-19

The covid-19 virus and its variants has modified not only its behavior, but also its clinical manifestationsbecause in 2019 when this new type of coronavirus appeared the sequelae were particularly respiratory.

Arnulfo Portales Castanedo, an internist and specialist in cardiopulmonary medicine, states that Initially, the most important sequelae were respiratory with an advanced state of pulmonary inflammation..

“Let’s remember that there were no vaccines, so the covids we had were relatively more aggressive, many had a pretty good time and others out of nowhere had a serious respiratory compromise and we ended up with them in intensive care, they were the ones with the most sequelae.”

At that moment it was thought that this type of sequelae would be unique, pulmonary fibrosis, difficulty breathing and the need for chronic use of oxygen and even steroids and cortisone to continue deflating the lung.

“We saw that the patient did not improve, we tried to use antifibrosing drugs of the lung, probably already in very late stages, some respond, others do not and we thought that this was going to be our only sequel.”

The specialist mentioned that Over time and as they saw the different variants of the virus and the transmission capacity, they realized that the population was becoming more vulnerable. and more susceptible to the ravages of transmissibility. The virus became more contagious, although with less lethality and affectation in degrees of severitywhich was modifying their behavior and clinical manifestations. 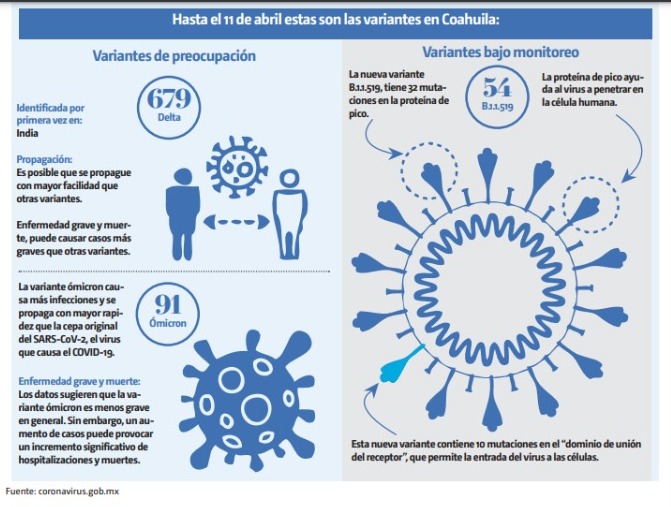 He considered that a person with a very serious health problem may not be cared for, thinking that it is covid and the time it takes to define whether or not it can be vital for the patient.

These are diverse, since in the first variants the affectation was mainly respiratory, while in the latest variants there have been other presentations.

Any infectious process, be it viral, bacterial, fungal, mycobacterial or parasitic, which are what is included in the pathogen, produces an infection and the body as part of the general response is going to inflame.

He explains that this inflammatory response has counterweights, factors that promote it, self-regulatory factors to stop it, and each person responds differently to the same stimulus, in this In the case of an infectious process such as the covid virus, we would only have to see what variant we are facing.

“Each one has its particularities, in this variability and this particular susceptibility of each person, this inflammatory response can be perpetual, it can be replicated or modified depending on the genome, what you have risk factors for developing or simply and simply even if you do not have them. you, you are the family chain that is going to start the change because the virus itself modified that genome.”

It is there where the manifestations of a new disease derived from or as a result of a detonation by the covid infection are triggeredwhich he considered terribly interesting from a medical point of view, but from a health point of view a serious problem.

Armando Abraham de Pablos Leal, an infectious disease doctor, stated that as new variants have existed, they have had a different clinical presentationbecause in the last two variants there have been behaviors at the level of the central nervous system.

Transverse myelitis as well as Guillain-Barré syndrome became more common and although not as frequentbegan to see more cases in the last 2 variants and have even had patients with suicidal ideation.

“We have had many patients with depression who have probably had a very mild flu-like illness, but the patients come to me two weeks later with a lot of anxiety, with easy crying and who go only for this symptom.”

He explained that the last two variants had this capacity, due to a protein called Neurofeline that makes it easy to enter the central nervous system. Variants have different presentations at the level of the nervous systembut each time they have had more access capacity.

Although it is true, he indicated, the inflammatory capacity is different in each variant and especially in the last one, which is omicron, which is said to have less inflammatory capacity and was greatly influenced by the vaccine. He mentioned that another problem is immunosuppression, patients with superinfection, aspergillosis, coccidioidomycosis and not only pulmonary tuberculosis, but the body’s response was not sufficient to stop it at the lung level and it is also disseminated.

“The immunosuppressive effect is also going to bring us even more things, perhaps we are just waiting for the latest variants, especially omicron, about what else can be activating us.”

ANDIn the case of older adults, he assured that at first they were the most affected, however, it had a lot to do with the fact that they were the first to be covered with the vaccine and that currently it is what has helped everyone.

Before and after covid Elida Moran Guel, a specialist in emergency medicine and intensive care, pointed out that the history of medicine will have a before and after covid-19 due to what is currently being experienced in the world. “It is a totally different change from what we learned at school, it is a disease that we all had to learn together, students, teachers, we all went hand in hand and I think we continue to learn”.

The specialist commented that with the sequelae that occur in the different variants, a patient can last up to 6 months inflamed, however, something new comes out daily and there are new reports. She indicated that in these two years people have written about her experience and that is what has greatly enriched her.

“Although at first one wrote what was going through his head, they are now more structured studies with greater statistical weight, with greater methodological weight, they are already studies so well done that we can already get an idea of ​​what could be done or what was done on the other side of the world in the face of covid.”