Can yoga deliver in times of pandemic?

Posted by: admin Categories: ANXIETY MANAGEMENT
Comments Off on Can yoga deliver in times of pandemic?

Altaf Shaikh, a resident of Mumbai, insists that yoga has given him a new lease on life.

Shaikh, in his early fifties, spent over three months battling the dreaded Delta variant of the coronavirus – 16 difficult days "grasping for breath" in a hospital and 80-plus days in bed – at the peak of the deadly COVID-19 crisis in India last year.

His oxygen levels hovered below the acceptable standards while he was fed with heavy doses of Western medicine. He struggled to get out of bed and needed help to walk.

"I literally went downhill. The hospital gave me life even though I had reservations about the way modern medicine was randomly dispensed. I was still confined to bed for several months after coming home," Shaikh said during a recent telephone conversation when Shanghai itself was battling the Omicron variant with a strictly-enforced lockdown.

All that, he said, changed after he discovered yoga. 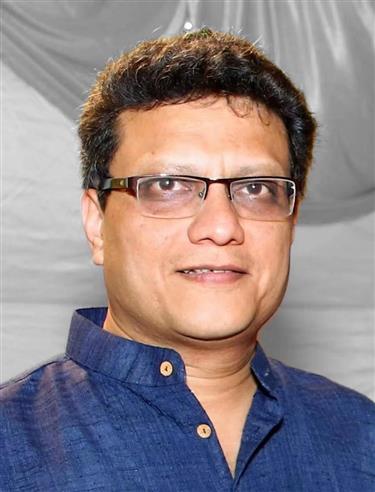 "My lungs were irreversibly damaged because of the heavy doses of steroids. I was too weak. It was around that time that a friend I had known for 30 years came to see me. He was a yoga instructor and pushed me to give it a try.

"I started doing yoga for one hour every day in the beginning. Initially, it was all about breathing exercises. Posture was the most important thing, followed by stomach exercises that regulated breathing," he said.

The unrelenting pandemic has put the focus back on alternative modes of treatment. In a 2020 paper, titled "Adjunctive Treatment of SARS-CoV-2 Infection and COVID-19," researchers from the Massachusetts Institute of Technology, University of California-San Diego, Chopra Library for Integrative Studies and Harvard University claim that "certain meditation, yoga asana (postures), and pranayama (breathing) practices may possibly be effective adjunctive means of treating and/or preventing SARS-CoV-2 infection."

"There is evidence of stress and inflammation modulation, and also preliminary evidence for possible forms of immune system enhancement, accompanying the practice of certain forms of meditation, yoga and pranayama, along with potential implications for counteracting some forms of infectious challenges," the paper stressed.

It is especially significant that yoga has found acceptance in the land of tai chi and other martial arts forms over the last few decades. Shanghai-based Sun Wanying, in her 30s, quit the gym and turned to yoga three years ago "to loosen her tight muscles."

Sun Wanying, in her 30s and an office worker, quit the gym and turned to yoga three years ago.

"I did gym for a few years, but my coach said my muscles were too tight and that I should do flexibility exercises instead. Yoga appeared to be the best option. It has not only helped me stay fit, but also opened my mind.

"Every yoga class is a new beginning. I always regard myself as a beginner and enjoy the process of breathing – inhaling and exhaling – and the asanas. I have overcome a lot of challenges and I am more positive in my thoughts now, especially with these COVID-19 outbreaks. I feel healthier and more energetic."

Media professionals Bobby Weng and Vivienne Ye have been hosting "yoga retreats" in the city and across the country for the last several years. They run a yoga community, and have hosted thousands of events "in the most beautiful places, with artwork and even museums."

"After COVID-19, we went back to the basics," said Weng. "During the Stone Age, you didn't need yoga, but the modern world has become overly materialistic. It has cut us off from nature; you no longer see gardens, only buildings. Even the air is polluted.

"Yoga helps you, I have seen the benefits of yoga," insisted Weng, who begins his day by spending 10 minutes each on yoga and meditation. "Big cities can be extremely stressful. You must de-stress.

"People started getting health-conscious due to COVID-19. Before the pandemic, they were only concerned about the good things in life, but now they are thinking about their bodies and their minds.

"I have a background in engineering, so I examine the theory... Yoga requires you to bend your body like a finger. You reorganize all of the energy and blood. To me, it makes sense. It is scientific in nature. It is effective.

"Meditation is also scientifically proven. It is also a method of detoxification. Nowadays, some of the CEOs, particularly those in the banking and financial institutions, are deep into meditation," he added.

Ye turned to yoga after feeling the stresses of entrepreneurship.

"It was always stressful and I was struggling to relax. I felt like a machine, and could not stop thinking and working. Then I discovered yoga and started going on these yoga trips. They take you to high-energy spots, which is basically nature, such as waterfalls and forests.

"I felt revitalized and recharged. After six months, I gained in confidence. I can look after myself now; I can cure myself, adjust my speed and rhythm, control my body and remain healthy. It is all about healing through nature." 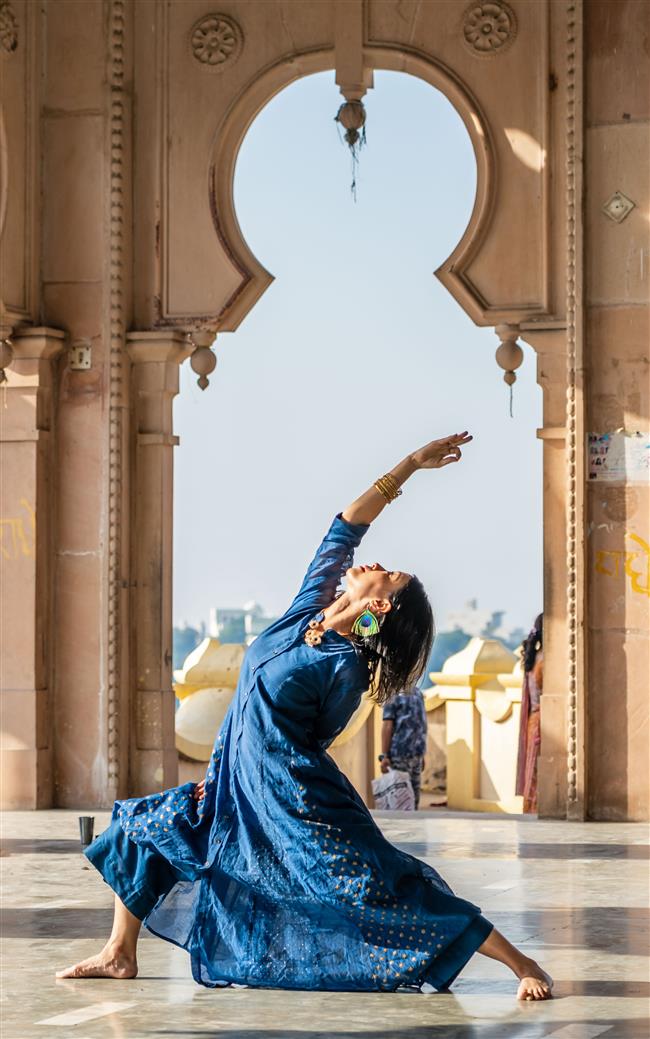 According to the World Health Organization, the global prevalence of anxiety and depression had increased by a staggering 25 percent in the first year of the COVID-19 pandemic, with young people and women among the worst affected.

Is it possible to get some relief through meditation? Weng certainly thinks so.

"The human brain has different types of brainwaves. The alpha wave (when the brain is not focused and is in an idle state) is a good learning mode and is primarily seen among children. They are very curious, they are in their own world, they don't care about many things," said Weng.

"Their learning skills are high, they are very creative and curious.

"Meditation is the only way for adults to enter that alpha wave state. The first step in meditation is to close your eyes. When you close your eyes, the outside world shuts on you. You are then linked to the alpha world in the same way that the children are.

"It becomes more creative when you calm down. A lot of people have said that after mediation they see a lot of interesting things, they get a lot of ideas.

"Keep that phone away. Get some clarity in mind, connect with nature," said Weng, who listens to calm, ambient music on the app while meditating.

Recent studies have found that yoga "appears to reduce musculoskeletal discomfort and mood disturbance of home-office workers." In a 2021 research paper, titled "Impact of 10-Min Daily Yoga Exercises on Physical and Mental Discomfort of Home-Office Workers During COVID-19," the authors noted that "sedentary workers may benefit from 10 min/day of yoga during the workday to attenuate potential physical and emotional discomfort during the current pandemic and beyond."

The Ministry of Ayush in India, which focuses on traditional and home-based treatments and remedies, has recommended yoga exercises to fight stress and boost immunity – the Sasakasana (the rabbit pose) and the Shavasana (the corpse pose) to relieve stress and anxiety, and the Nadishodhana Pranayama (nostril breathing) and the Kapalabhati Pranayama (forceful breathing) to improve respiratory health. 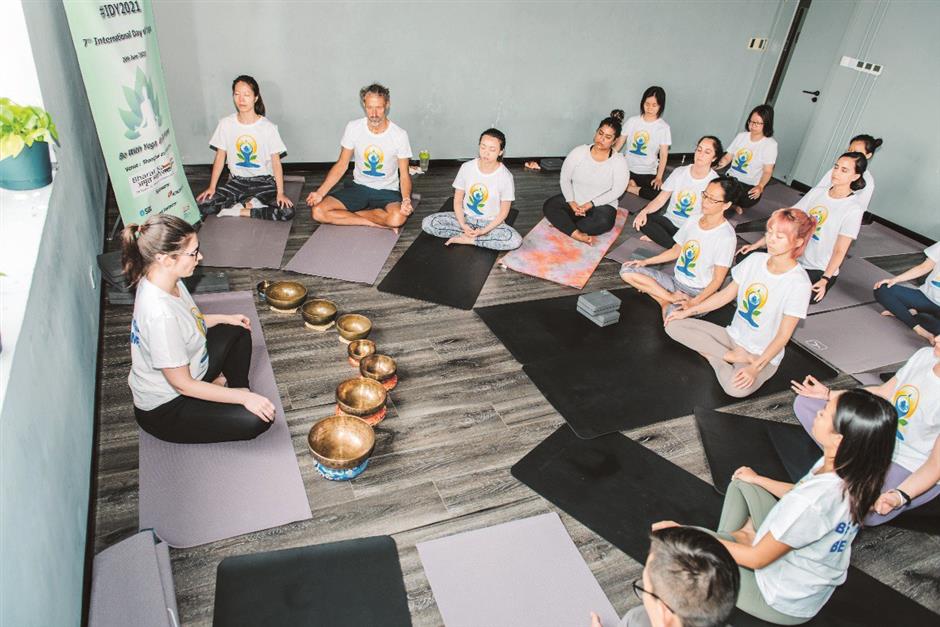 Courtesy of Consulate General of India in Shanghai

People attend a yoga event organized by the Indian consulate in Shanghai last year as part of the International Day of Yoga.

With the world still looking for a breakthrough despite the emergence of vaccines to tame the constantly-mutating coronavirus, yoga and other traditional methods of treatment offer the best self-help.

The researchers from the US institutes called for "rigorous scientific investigation," arguing that "while hundreds of millions of research dollars have been funneled into drug and vaccine solutions that target the external agent, integrative practitioners tuned to enhancing immunity faced a familiar mostly unfunded task."

The International Day of Yoga next Tuesday may be the time to make that beginning. On Saturday, BYMB will hold a yoga training camp at Tian'an 1000 Trees (600 Moganshan Road) from 8am till noon. Elsewhere, the Indian embassy and consulates in Shanghai and Guangzhou are involved in up to 75 events, including in cities such as Shanghai, Nanjing, Hangzhou and Yiwu. 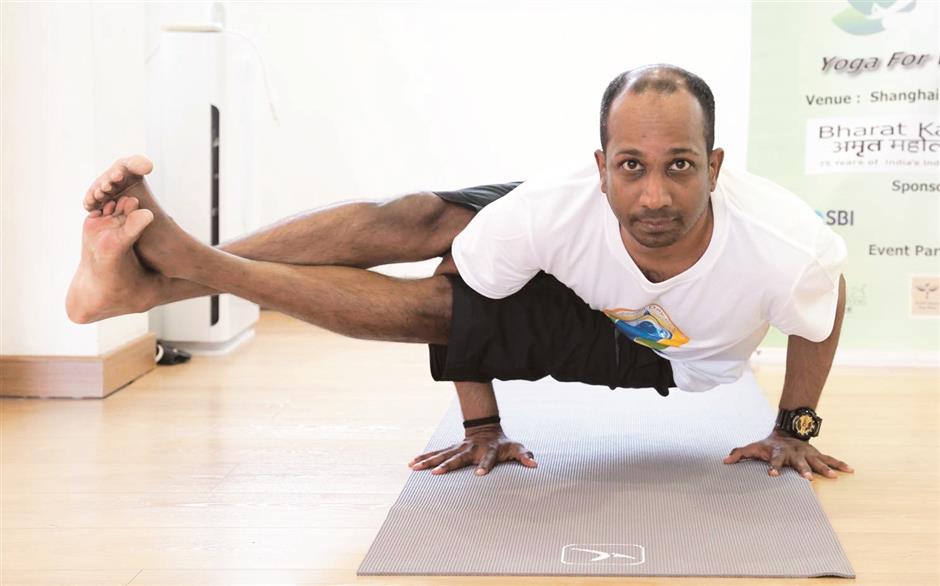 Courtesy of Consulate General of India in Shanghai

A yoga coach in Shanghai. Yoga has found acceptance in China, the land of tai chi and other martial arts forms, over the past few decades.