Effect of Chest Physiotherapy on Improving Pulmonary Function in Dealing With Congenital Heart Disease and Lung Collapse: A Case Report

Posted by: admin Categories: PHYSICAL REHABILITATION
Comments Off on Effect of Chest Physiotherapy on Improving Pulmonary Function in Dealing With Congenital Heart Disease and Lung Collapse: A Case Report

Congenital cardiac disorders are commonly classified as cyanotic or acyanotic depending on clinical manifestations. After birth, heart structures such as the foramen ovale, ductus venosus, and ductus arteriosus are no longer necessary to sustain life [1]. The ductus arteriosus is a shunt between the pulmonary artery and the aorta that permit oxygenated blood transfer from the placenta to pass the fetal lungs and enter systemic circulation [2]. Patent ductus arteriosus (PDA) is the failure of the ductus arteriosus to close after birth, which is largely a preterm disease. The ductus arteriosus remains open in 64 percent of infants born at 27 to 28 weeks of gestation and 87 percent of infants born at 24 weeks [2]. For hemodynamically significant PDA closure, PDA ligation, catheter intervention, or oral paracetamol may be suggested as lifesaving approaches [3]. An atrial septal defect (ASD) is a gap in the interatrial septum that allows blood to flow freely between the left and right sides of the heart. ASD is the third most prevalent kind of congenital heart defect (CHD), accounting for 30 to 40 percent of all CHDs [4]. Coarctation of the aorta (CoA) is a cardiac condition that causes a blockage in the aorta's circulation. CoA is most usually observed slightly distal to the left subclavian artery, at the site where the ductus arteriosus unites to the aorta. Typically, there is medial hypertrophy with "shelf-like" tissue extending in the aortic lumen from the posterior aortic wall [5]. Pulmonary arterial hypertension (PAH) is characterized by increased pulmonary blood circulation, which leads to increased pressure in the pulmonary artery, which is often associated with cardiovascular dysfunction [6]. Bacterial pneumonia is a severe lung infection characterized by lower airway inflammation that primarily affects infants, young children, and the elderly. This disorder can be lethal if not treated immediately. Early indications and symptoms include a productive cough, temperature with chills, trouble in breathing, tachypnoea, and exhaustion [7].

Here, we report a case of a three months old female child who was brought to a tertiary care center with complaints of wet cough, poor feeding, and respiratory distress. Her mother was primigravida at term gestation with oligohydramnios and delivered via lower segment caesarean section. After one month of birth, she had repeated complaints of poor weight gain, lethargy and presence of a suck-rest-suck cycle, and pneumonia and admitted to a private hospital where investigations such as a two-dimensional (2D) echo were done and she was diagnosed as a case of patent ductus arteriosus and pulmonary artery hypertension and advised surgery and referred to a tertiary care center for surgery. On admission, the patient’s parents came with the complaint of fever, cough, difficulty in breathing, and difficulty in sucking the milk so investigations were done. The chest x-ray revealed aspiration pneumonia with left-sided left lung collapse. As a result, surgery was postponed and she was admitted to the pediatric intensive care unit (PICU), where she was on ventilator support for six days and then shifted to oxygen support for 15 days mentioned in (Table 1). She underwent physiotherapeutic treatment during this time and it helped in her recovery from lung collapse. After the infection was resolved, the patient underwent surgery for PDA ligation and coarctation repair via left posterolateral thoracotomy (partial pleura over descending thoracic aortic (DTA) opened. DTA aortic arch and left subclavian artery were dissected and looped) and was advised physiotherapy post-operatively.

Oral consent was taken from the patient’s parents before the beginning of the examination procedure. On inspection and observation, the patient was observed in the supine lying position. The patient was ectomorph in her body type and conscious co-operative and monitored through chest leads. She was breathing via nasal prongs and feeding via a Ryle’s tube. On general examination, the patient was febrile with a pulse rate was 146 beats/min, and a respiratory rate of 46 breaths/min, which suggests the patient was tachypneic. The patient weighed two and a half kg, height of 53 cm, basal metabolic index of 8.9, body surface area of zero point two, and a head circumference of 32 cm. On auscultation, mid-diastolic mitral flow murmur and bilateral crepitations were present in the upper and lower zones. There was a developmental delay, the patient did not achieve the neck control milestone as she completed three months of age. Peripheral smear shows red blood corpuscles (RBCs) predominantly, normocytic hypochromic with anisopoikilocytosis showing pencil cells and microcytes suggested of iron deficiency anemia. Platelets - reduced on smear. Antigen-presenting cell 26,000 cells/mm3 as per cell counter. Endotracheal secretion culture suggests the growth of acinetobacter species. Chest X-ray shown in (Figures 1A, 1B), pre-operative 2D echo, and colour doppler study suggest left atrium/ left ventricle dilation, large nonrestrictive PDA with a left to right shunt. Left ventricle inner dimension 3.3 cm (Z score 3.3), left atrium 1.6 cm (Z score 0.27), interventricular septum 0.6 cm (Z score 2.3), pulsed wave 0.5 cm (Z score 3.0). Shelf at isthmus - gradient 33 mmig - Coarctation of Aorta. Small Ostium Secundum - Atrial septal defect. The timeline of the event is shown in Table 2. 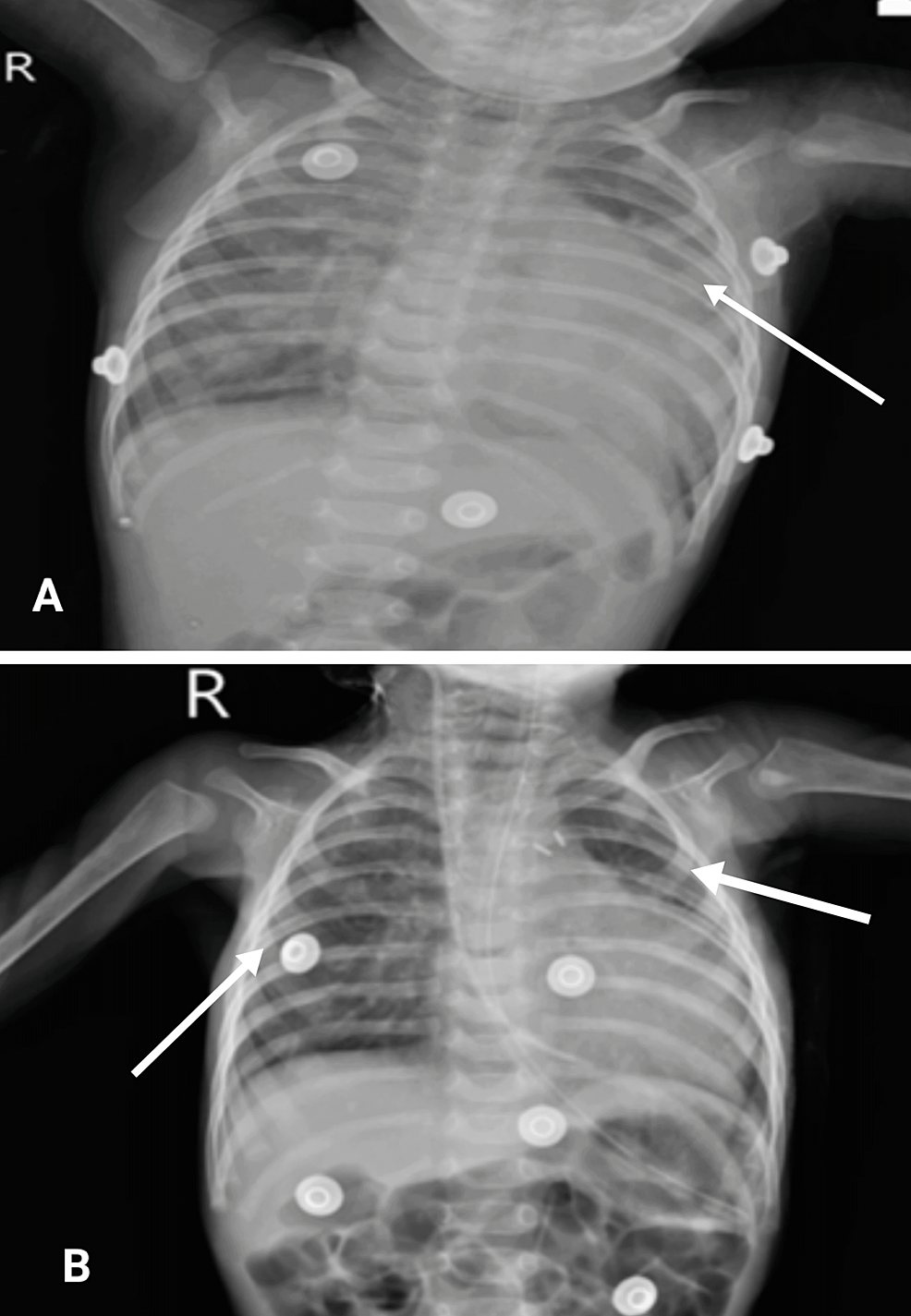 In this report, the primary objective is to highlight the preoperative chest physiotherapy (Table 3) administered with continuous positive pressure for aspiration pneumonia and left lung collapse is to make the patient fit for surgery, to minimised the work of breathing, reduced airway resistance and up surge gaseous exchange followed by postoperative physiotherapy management focused on the advance techniques to prevent lung complications, improved breathing patterns, removed secretions, and normalize lung condition. Table 4 displays physiotherapeutic intervention. Figures 2A, 2B shows the post-operative physiotherapy management of three months old female infant. 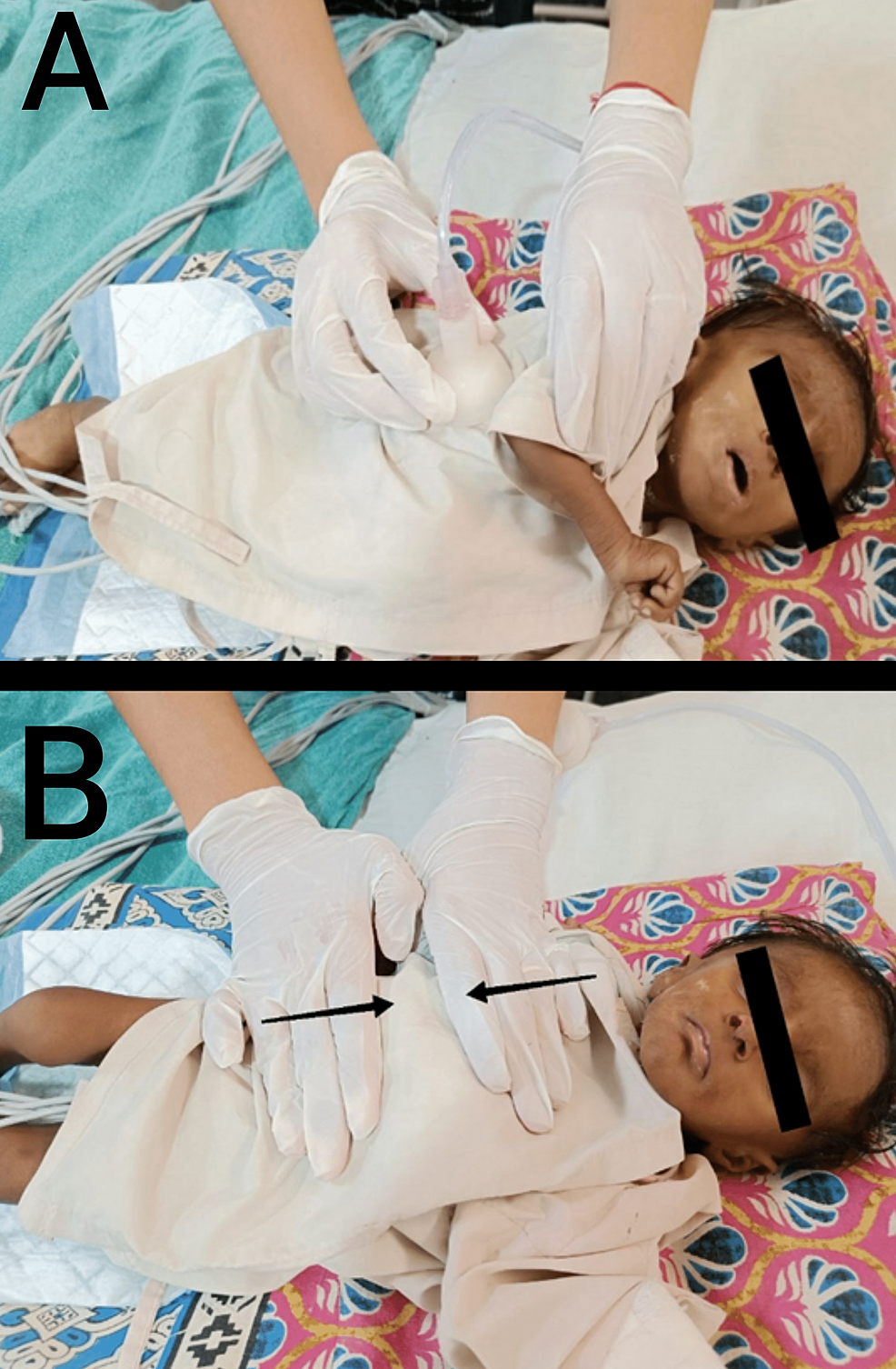 The outcome are shown in Tables 4, 5.

Novel chest rehabilitation strategies, particularly designed for infants, have been recently employed. According to the literature effect of PSE on breathing mechanics in infants suggest that PSE deflates the lung to expiratory reserve volume (ERV) and causes no modifications in peak expiratory flow (PEF), triggered sigh breaths, and reduces tidal volume, which is usually the primary mechanical feature for mucus removal [8]. Exercise is a successful therapy for CHD in emerging adults, as per earlier research. However, there is a paucity of research on how exercise affects newborns with CHD who have had a cardiac catheterization. Passive exercises and physical activity may be beneficial to infants with CHD by, enhancing cardiac function, and boosting bone strength [9]. The evacuation of secretions to the centre airway is made easier by percussion and vibration. The percussion was chosen by 74 percent of those physiotherapists as the preferred chest physiotherapy treatment for infants [10]. The infants developed severe acute pulmonary infectious diseases, prompting intensive care unit stay, intubation, and ventilator support. These are all the recognized components that increase the likelihood of Acinetobacter, a multidrug-resistant bacterium that causes the spread of infection [11] [12]. The impacts of a developmental physiotherapy regimen on vital signs in preterm infants were demonstrated by the researchers. Physical therapy's advantages and hazards in specific developmental progress and caused hemodynamic stress are significant factors in supporting intervention with preterm babies. The results of this study indicate that preterm infants responded to six developmental activities with a significant increase in mean heart rate, but no significant change in mean Sao2 [13].

The therapeutic purpose was to maintain tissue perfusion, promote better functional capacity, optimize breathing, completely eradicate chest secretions, and restore normal cardiovascular and respiratory function. The effectiveness of the cardiorespiratory physiotherapy treatment like the prolonged slow expiratory technique, lung squeeze technique, and other pulmonary physiotherapy regimens show positive results to minimize atelectasis in the patient with pneumonia. The implication of pre-and post-operative physiotherapy strategies aids in the recovery from the pathologic condition and also helps to avoid complications and has shown optimum functional recovery.