BAZHOU, China (AP) — Yao Ruyan paced frantically outside the fever clinic of a county hospital in China’s industrial Hebei province, 70 kilometers (43 miles) southwest of Beijing. Her mother-in-law had COVID-19 and needed urgent medical care, but all hospitals nearby were full.

“They say there’s no beds here,” she barked into her phone.

As China grapples with its first-ever national COVID-19 wave, emergency wards in small cities and towns southwest of Beijing are overwhelmed. Intensive care units are turning away ambulances, relatives of sick people are searching for open beds, and patients are slumped on benches in hospital corridors and lying on floors for a lack of beds.

Yao’s elderly mother-in-law had fallen ill a week ago with the coronavirus. They went first to a local hospital, where lung scans showed signs of pneumonia. But the hospital couldn’t handle COVID-19 cases, Yao was told. She was told to go to larger hospitals in adjacent counties.

As Yao and her husband drove from hospital to hospital, they found all the wards were full. Zhuozhou Hospital, an hour’s drive from Yao’s hometown, was the latest disappointment.

Yao charged toward the check-in counter, past wheelchairs frantically moving elderly patients. Yet again, she was told the hospital was full, and that she would have to wait.

“I’m furious,” Yao said, tearing up, as she clutched the lung scans from the local hospital. “I don’t have much hope. We’ve been out for a long time and I’m terrified because she’s having difficulty breathing.”

Over two days, Associated Press journalists visited five hospitals and two crematoriums in towns and small cities in Baoding and Langfang prefectures, in central Hebei province. The area was the epicenter of one of China’s first outbreaks after the state loosened COVID-19 controls in November and December. For weeks, the region went quiet, as people fell ill and stayed home.

Many have now recovered. Today, markets are bustling, diners pack restaurants and cars are honking in snarling traffic, even as the virus is spreading in other parts of China. In recent days, headlines in state media said the area is “starting to resume normal life.”

But life in central Hebei’s emergency wards and crematoriums is anything but normal. Even as the young go back to work and lines at fever clinics shrink, many of Hebei’s elderly are falling into critical condition. As they overrun ICUs and funeral homes, it could be a harbinger of what’s to come for the rest of China.

The Chinese government has reported only seven COVID-19 deaths since restrictions were loosened dramatically on Dec. 7, bringing the country’s total toll to 5,241. On Tuesday, a Chinese health official said that China only counts deaths from pneumonia or respiratory failure in its official COVID-19 death toll, a narrow definition that excludes many deaths that would be attributed to COVID-19 in other places.

Experts have forecast between a million and 2 million deaths in China next year, and the World Health Organization warned that Beijing’s way of counting would “underestimate the true death toll.”

READ MORE: WHO concerned over increasing reports of severe COVID-19 cases in China

At Baoding No. 2 Hospital in Zhuozhou on Wednesday, patients thronged the hallway of the emergency ward. The sick were breathing with the help of respirators. One woman wailed after doctors told her that a loved one had died.

The ICU was so crowded, ambulances were turned away. A medical worker shouted at relatives wheeling in a patient from an arriving ambulance.

“There’s no oxygen or electricity in this corridor!” the worker exclaimed. “If you can’t even give him oxygen, how can you save him?”

“If you don’t want any delays, turn around and get out quickly!” she said.

The relatives left, hoisting the patient back into the ambulance. It took off, lights flashing. 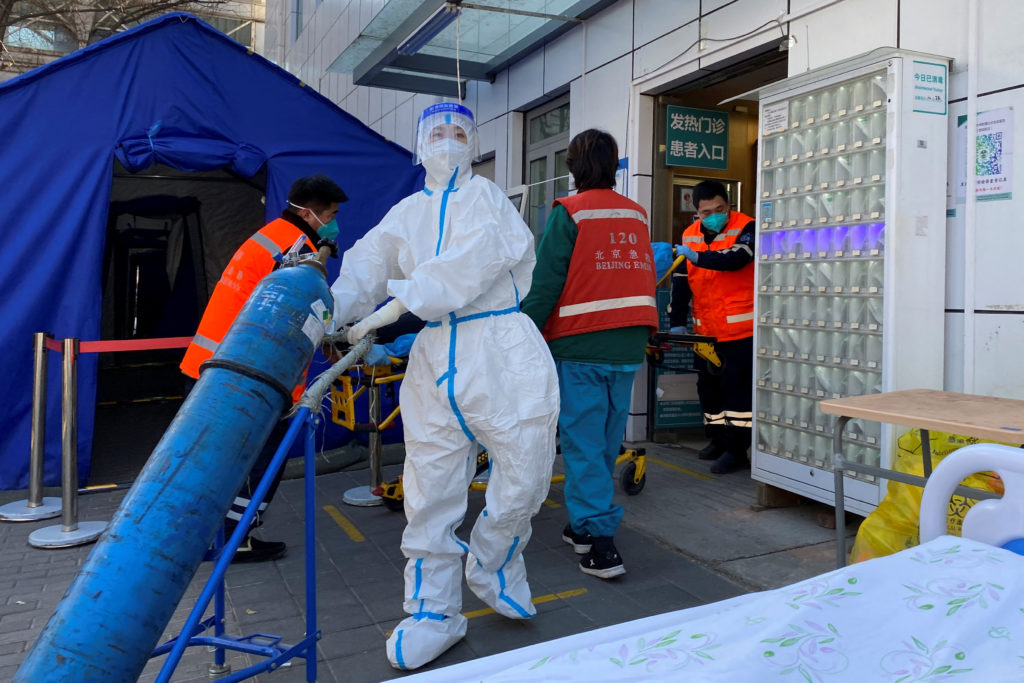 A nurse moves an oxygen tank into a fever clinic at a hospital as COVID-19 outbreaks continue in Beijing, Dec. 23, 2022. Photo by Thomas Peter/REUTERS

In two days of driving in the region, AP journalists passed around thirty ambulances. On one highway toward Beijing, two ambulances followed each other, lights flashing, as a third passed by heading in the opposite direction. Dispatchers are overwhelmed, with Beijing city officials reporting a sixfold surge in emergency calls earlier this month.

Some ambulances are heading to funeral homes. At the Zhuozhou crematorium, furnaces are burning overtime as workers struggle to cope with a spike in deaths in the past week, according to one employee. A funeral shop worker estimated it is burning 20 to 30 bodies a day, up from three to four before COVID-19 measures were loosened.

“There’s been so many people dying,” said Zhao Yongsheng, a worker at a funeral goods shop near a local hospital. “They work day and night, but they can’t burn them all.”

At a crematorium in Gaobeidian, about 20 kilometers (12 miles) south of Zhuozhou, the body of one 82-year-old woman was brought from Beijing, a two-hour drive, because funeral homes in China’s capital were packed, according to the woman’s grandson, Liang.

“They said we’d have to wait for 10 days,” Liang said, giving only his surname because of the sensitivity of the situation.

Liang’s grandmother had been unvaccinated, Liang added, when she came down with coronavirus symptoms, and had spent her final days hooked to a respirator in a Beijing ICU.

Over two hours at the Gaobeidian crematorium on Thursday, AP journalists observed three ambulances and two vans unload bodies. A hundred or so people huddled in groups, some in traditional white Chinese mourning attire. They burned funeral paper and set off fireworks.

“There’s been a lot!” a worker said when asked about the number of COVID-19 deaths, before funeral director Ma Xiaowei stepped in and brought the journalists to meet a local government official.

As the official listened in, Ma confirmed there were more cremations, but said he didn’t know if COVID-19 was involved. He blamed the extra deaths on the arrival of winter.

“Every year during this season, there’s more,” Ma said. “The pandemic hasn’t really shown up” in the death toll, he said, as the official listened and nodded.

Even as anecdotal evidence and modeling suggests large numbers of people are getting infected and dying, some Hebei officials deny the virus has had much impact.

“There’s no so-called explosion in cases, it’s all under control,” said Wang Ping, the administrative manager of Gaobeidian Hospital, speaking by the hospital’s main gate. “There’s been a slight decline in patients.”

READ MORE: Some Chinese authorities encourage people with mild COVID to go back to work

Wang said only a sixth of the hospital’s 600 beds were occupied, but refused to allow AP journalists to enter. Two ambulances came to the hospital during the half hour AP journalists were present, and a patient’s relative told the AP they were turned away from Gaobeidian’s emergency ward because it was full.

Thirty kilometers (19 miles) south in the town of Baigou, emergency ward doctor Sun Yana was candid, even as local officials listened in.

“There are more people with fevers, the number of patients has indeed increased,” Sun said. She hesitated, then added, “I can’t say whether I’ve become even busier or not. Our emergency department has always been busy.”

The Baigou New Area Aerospace Hospital was quiet and orderly, with empty beds and short lines as nurses sprayed disinfectant. COVID-19 patients are separated from others, staff said, to prevent cross-infection. But they added that serious cases are being directed to hospitals in bigger cities, because of limited medical equipment.

The lack of ICU capacity in Baigou, which has about 60,000 residents, reflects a nationwide problem. Experts say medical resources in China’s villages and towns, home to about 500 million of China’s 1.4 billion people, lag far behind those of big cities such as Beijing and Shanghai. Some counties lack a single ICU bed.

As a result, patients in critical condition are forced to go to bigger cities for treatment. In Bazhou, a city 40 kilometers (25 miles) east of Baigou, a hundred or more people packed the emergency ward of Langfang No. 4 People’s Hospital on Thursday night.

Guards worked to corral the crowds as people jostled for positions. With no space in the ward, patients spilled into corridors and hallways. Sick people sprawled on blankets on the floor as staff frantically wheeled gurneys and ventilators. In a hallway, half a dozen patients wheezed on metal benches as oxygen tanks pumped air into their noses.

Outside a CT scan room, a woman sitting on a bench wheezed as snot dribbled out of her nostrils into crumpled tissues. A man sprawled out on a stretcher outside the emergency ward as medical workers stuck electrodes to his chest. By a check-in counter, a woman sitting on a stool gasped for air as a young man held her hand.

“Everyone in my family has got COVID,” one man asked at the counter, as four others clamored for attention behind him. “What medicine can we get?”

In a corridor, a man paced as he shouted into his cellphone.

“The number of people has exploded!” he said. “There’s no way you can get care here, there’s far too many people.”

It wasn’t clear how many patients had COVID-19. Some had only mild symptoms, illustrating another issue, experts say: People in China rely more heavily on hospitals than in other countries, meaning it’s easier for emergency medical resources to be overloaded.

Over two hours, AP journalists witnessed half a dozen or more ambulances pull up to the hospital’s ICU and load critical patients to sprint to other hospitals, even as cars pulled up with dozens of new patients.

A beige van pulled up to the ICU and honked frantically at a waiting ambulance. “Move!” the driver shouted.

“Let’s go, let’s go!” a panicked voice cried. Five people hoisted a man bundled in blankets out of the back of the van and rushed him into the hospital. Security guards shouted in the packed ward: “Make way, make way!”

The guard asked a patient to move, but backed off when a relative snarled at him. The bundled man was laid on the floor instead, amid doctors running back and forth. “Grandpa!” a woman cried, crouching over the patient.

Medical workers rushed over a ventilator. “Can you open his mouth?” someone shouted.

As white plastic tubes were fitted onto his face, the man began to breathe more easily.

Others were not so lucky. Relatives surrounding another bed began tearing up as an elderly woman’s vitals flatlined. A man tugged a cloth over the woman’s face, and they stood, silently, before her body was wheeled away. Within minutes, another patient had taken her place.