Posted by: admin Categories: PULMONARY DISEASES
Comments Off on US is recording more days of ‘unhealthy’ or ‘hazardous’ air quality than ever before

Americans were breathing in more polluted air than ever in the years just before the COVID-19 pandemic, a new study finds.

Researchers from the American Lung Association (ALA) reported that after over two-decades of declines, the number of days where the air quality in the U.S. fell under the umbrella of 'very healthy' or 'hazardous' reached an all-time high from 2018 to 2020.

Polluted air has been tied to lung cancer, asthma and other respiratory issues, and can be tied to tens of thousands of U.S. deaths every year.

While the U.S. has certainly made leaps in recent decades to limit air pollution, experts tell DailyMail.com that more still needs to be done, warning that this situation will worsen if leaders remain inactive on climate change.

The ALA publishes regular reports on the state of American air quality, and had noted declined air pollution levels for 23 years leading up to 2018. 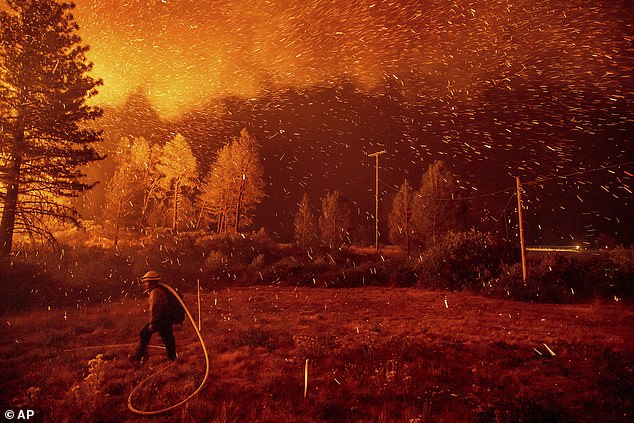 Researchers find that America experienced more days of high air pollution levels than ever before from 2017 to 2020, largely sparked by wildfires across the west coast

Positive trends reversed late last decade, though, and now over 137 million Americans - around 40 percent of the population - are believed to live in a region with unhealthy air.

Paul Billings, the national senior vice president at the ALA, told DailyMail.com that these decreases were mainly a result of the Clean Air Act, which was passed in 1963 for that exact purpose.

A changing climate has proven to be a setback, though, as wildfires that scorched through the west coast in recent years fueling a massive uptick in particles being captured in the air.

‘Too many people are breathing too much air pollution on too many days,' Billings said.

'...Things like wildfire dramatically affect the health of those exposed.' 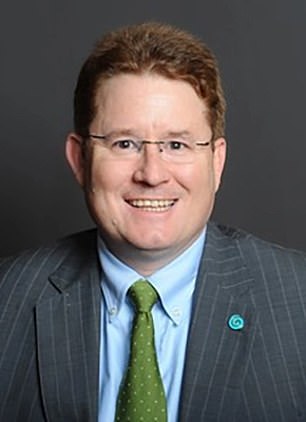 Paul Billings (pictured), the national senior vice president at the ALA, said that officials need to work to move towards renewable, greener, energy sources

These fires were not the only major cause, though, with Billings saying that 'any place where there’s high levels of combustion going on' will generate high levels of particle pollution.

He also notes that regular use of cars - a staple of American life - power plants, wood burning and manufacturing pollution are also playing major roles in polluting American's air.

Because of how much of a role driving in particular plays in pollution, many were hoping that reduced travel and traffic levels would give a reprieve to the polluted air.

This proved not to be the case, though, because there was a surge in people having packages and food delivered, polluting the air.

The surge in wildfires that struck the west coast in the late 2010s were tied to a warming climate creating dryer conditions in the nation's lush forests.

Climate change, Billings says, is at the root of the issue here.

'Climate change is a health emergency,' he warned.

'Our report shows the impact climate change is having on the air we breathe.’

The same things causing air pollution are both causing the changing climate, and on the other side, the after effects of climate change then create more pollution. 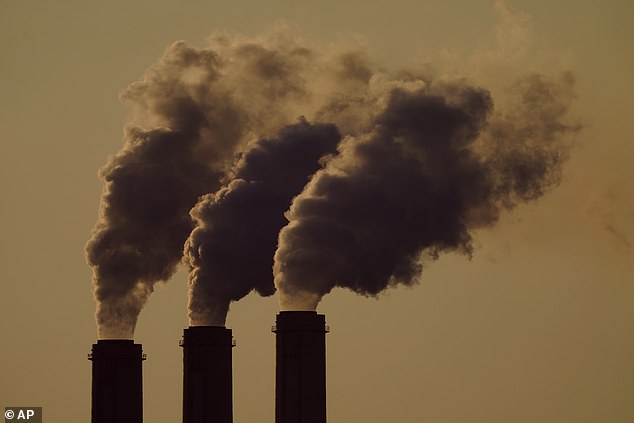 While wildfires are one major cause of air pollution, emissions from cars, energy and manufacturing facilities are major culprits as well

Cars are some of the largest pollutants in America, and there are known links between living next to a major highway and suffering brain and respiratory issues because of constant inhalation of pollutants.

This has also led to a disproportionate burden of air pollution being shouldered by poorer, often minority, communities.

The report finds that a person of color is 61 percent more likely to be living in an area with unhealthy air pollution that a while person.

Billings explains that this is because of the way much of American society was built in past decades.

When the Clear Air Act passed, much of the nation's investment into reducing pollution levels went into more affluent - usually white - communities.

He recommends that officials work to implement renewable energy around the country, moving from fossil fuel powered grids to green energy, and to transition to widespread use of electric cars.

Tags: ASTHMA breathing covid19 lung lung cancer respiratory
« 10 Smartest Demon Slayer Characters, Ranked
Why is it Getting Worse in US? »