Long-term exposure to air pollution is linked to an increased prevalence of COPD, which lowers lung function and makes breathing difficult for over 2 million people in Canada and hundreds of millions worldwide.

While most studies have looked at areas with high levels of pollution, a collaborative Canadian research network led by scientists from the Research Institute of the McGill University Health Centre (RI-MUHC) decided to examine the situation in Canada. 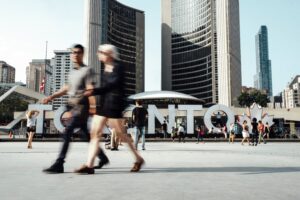 ‘Few studies have examined the relationship between air pollution and the lung health of adults in areas where air pollution concentrations are low, such as in Canada,’ said Dr. Jean Bourbeau, Senior Scientist in the Translational Research in Respiratory Diseases Program (RESP) at the RI-MUHC, Professor in the Department of Medicine at McGill University and senior author on this publication.

Their findings also show that individuals with dysanaptic lungs – a developmental mismatch between airway and lung size – could be more susceptible to the long-term effects of air pollution on lung function and COPD.

They found that individuals with smaller airways had lower lung function and were 87% more likely to develop COPD compared to people with larger airways with similar exposure to air pollution.

‘For the first time, common differences in lung structure that arise early in life were shown to increase susceptibility to the harmful effects of air pollution later in life,’ said study author Dany Doiron, PhD, a Research Associate at the RI-MUHC.

‘Our results suggest that a relatively important proportion of the Canadian population is particularly susceptible to inhaled air pollutants,’ added co-author of the study Dr. Benjamin Smith, a scientist in the Translational Research in Respiratory Diseases Program (RESP) at the RI-MUHC and an Associate Professor in the Department of Medicine at McGill University.

The study has been published in the American Journal of Respiratory and Critical Care Medicine.