Posted by: admin Categories: PHYSICAL REHABILITATION
Comments Off on Positive Impact of Inpatient Respiratory Rehabilitation in a Rare Case of Acute Necrotizing Encephalopathy

Acute necrotizing encephalopathy is a disorder marked by a respiratory or gastrointestinal illness, high fever, and fast changes in consciousness and seizures [1]. It is a rare but unique kind of acute encephalopathy with a worldwide prevalence. Numerous cases have been documented in Asia as well as in many Western nations. The majority of instances are sporadic; however, a few incidences being occasional and/or family episodes have been described, which indicates a hereditary pattern [2]. It is widely thought to be a para infectious condition caused mainly by viral infections [3]. This encephalopathy is distinguished by multifocal, symmetric brain lesions affecting the bilateral thalamus, brainstem tegmentum, cerebral periventricular white matter, and cerebellar medulla, which may be detected on computed tomography and magnetic resonance imaging (MRI) [4]. In certain cases, a viral origin has been hypothesized; hence, a viral prodromal may precede neurological abnormalities. However, both environmental and host variables may be implicated in the causative link between viral infections and ANE, as well as the precise pathophysiology of ANE. Only around 10% of the patients make a complete recovery. There were reversible imaging alterations in cases that had a favorable result [5]. In such situations, critically ill patients present significant diagnostic challenges [6].

ANE has no distinct clinical symptoms or indications, and the exact pathophysiology and risk factors are unknown. The exact cause of acute necrotizing encephalopathy of childhood (ANEC) and the pathogens that cause it are unknown; however, mycoplasma, influenza virus, herpes simplex virus, and human herpes virus-6 are among the most prevalent diseases that worsen the condition. It is thought to be caused by a cytokine storm [7]. Tumor necrotizing factors and interleukins 1 and 6 are the cytokines that can speed up the disease. The autosomal-dominant types of ANE, both recurrent and familial, were discovered to be incompletely autosomal-dominant. Missense mutations in the gene that encodes the nuclear pore protein Ran binding protein 2 (RANBP2) were also discovered [8]. Through this case report, the rationale was to provide insight into the role of a physiotherapist in the acute necrotizing encephalopathy of a 13-year-old boy admitted to the PICU.

A previously healthy 13-year-old boy with no prior medical history was referred to a rural hospital on November 7, 2021. As narrated by the father, the patient had an acute onset of fever, which was intermittent and high-grade, along with chills, rigor, and difficulty in breathing. Immediately he was taken to a local hospital where medications were given, and the fever was managed. After two days, there was an episode of fever, followed by two episodes of vomiting as well as loose stools. He developed an altered sensorium the same evening. There were no witnessed convulsions or abnormal movements at home or en route to the hospital. The patient had mild intermittent asthma which was managed by albuterol nebulization. Due to desaturation, he was given 8 liters of O2 support to maintain saturation and was shifted to the PICU. Necessary investigations like Complete blood count, kidney function test, liver function test, blood culture, arterial blood gas, an x-ray of the chest, and MRI of the brain were done. The patient received ceftriaxone and acyclovir along with vitamin K and adrenaline. He was also given fludrocortisone and immunoglobulins.

He presented with a poor Glasgow coma scale (GCS) with a score of 6/15 associated with an episode of desaturation, for which he was intubated with an endotracheal tube for one week. He was diagnosed with acute necrotizing encephalopathy on November 17, 2021. Given prolonged intubation for nine days, a tracheostomy was done, and he was put on a mechanical ventilator on the synchronized intermittent mandatory ventilation + pressure regulated volume control (SIMV + PRVC) mode shown in Figure 1. The chest x-ray showed heterogeneous opacities in bilateral lung fields with decreased air entry in lower zones for which a physiotherapy referral was given. Pediatric respiratory rehabilitation was started for him on the fourth day after admission. After two weeks, his condition improved, and he was put on the synchronized intermittent mandatory ventilation + pressure support (SIMV+PS) mode of the ventilator. After a week, he was put on pressure support/continuous positive airway pressure (PS + CPAP) mode of the ventilator for eight days. The weaning trials of the ventilator were started. He was able to maintain spontaneous breathing for 48 hours and then he was decannulated. After decannulation, he was moved to the pediatric ward and oral feeding was started for him. 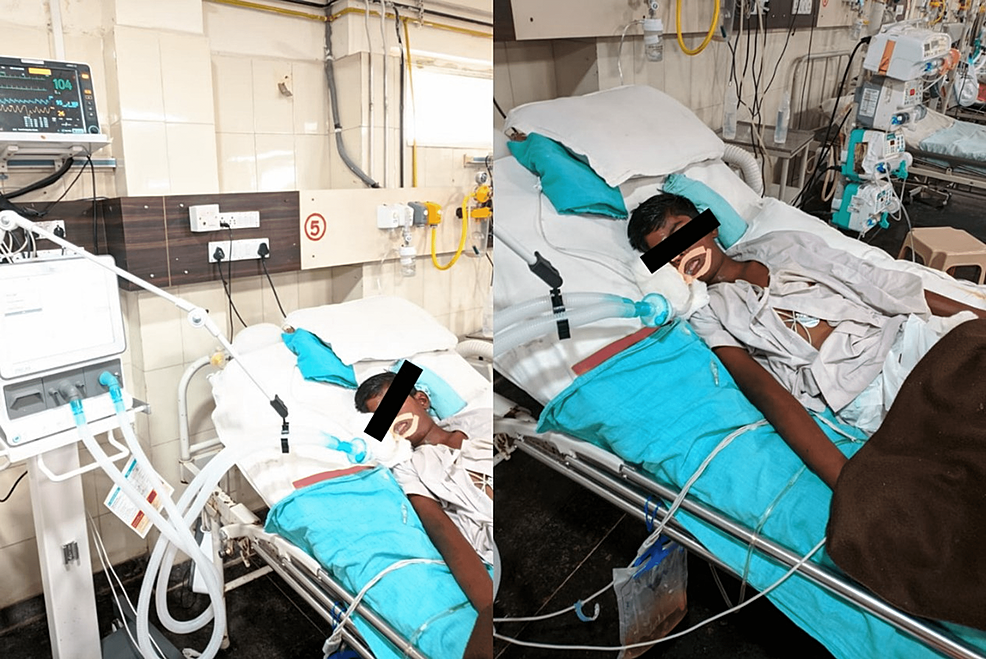 Figure
1:
The patient on the day of assessment on a ventilator.

On examination, the GCS of the patient was six. On inspection, the patient was assessed in a lying position on the bed in a semi-fowler’s position. The chest was bilaterally symmetrical, and no deformity was observed. The patient was using the Accessory muscles for respiration. The patient was on the mechanical ventilator in SIMV+PRVC mode, Positive end-expiratory (PEEP) was 5 cm H2O, tidal volume was 420 mL, and Fraction of inspired oxygen (FiO2) was 80%. The Foley catheter, Ryle’s tube, and the central venous line were present in situ. The tone and Manual muscle testing findings are mentioned in Table 1. On observation, the heart rate was 82 beats per minute with a regular rhythm. The blood pressure was 116/84 mmHg and SPO2 was 98%. The respiratory rate was 30 breaths per minute, regular in rhythm, and of abdominal type. Chest excursion was bilaterally symmetrical but reduced at the supra-mammary, mammary, and infra-mammary levels. The chest expansion was reduced at all three levels, i.e., axillary level, nipple level, and xiphisternum level. Coarse crackles were heard in the bilateral basal segment on auscultation.

Table
1: Findings of the tone and manual muscle testing in the upper and lower limb. 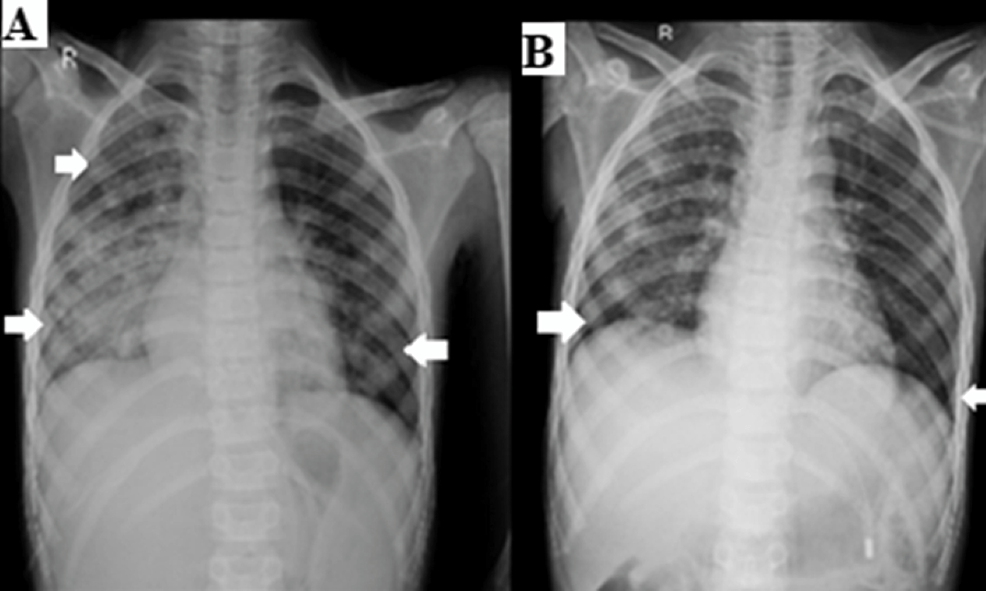 Figure
2:
(A) X-ray of the chest shows consolidation in bilateral lower lobes and infiltrates seen in upper and middle lobes indicating an infective etiology. (B) Chest x-ray of the chest after two months of respiratory rehabilitation.

The rehabilitation protocol was of eight weeks, which was divided into weeks 1-2, weeks 3-4, weeks 5-6, and weeks 7-8 (Table 2). To enhance the patient’s functional activities, started with bedside sitting. Initially, it was for three minutes and then progressed to an increase of one minute every day (Figure 3).

Table
2: Respiratory rehabilitation protocol given to the patient. 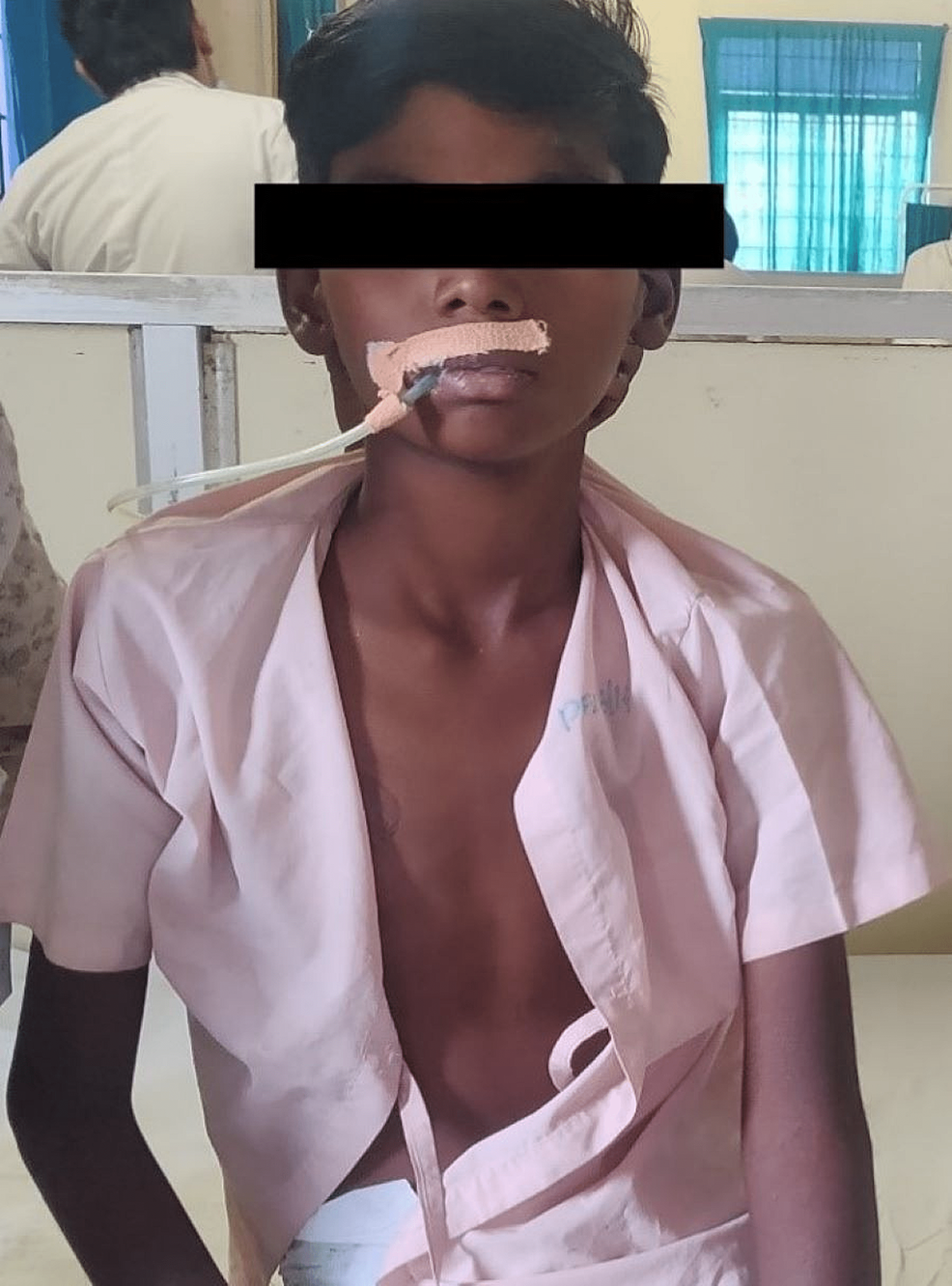 Figure
3:
The patient at bedside sitting.

Follow-up of the patient was taken on the first day of the rehabilitation, Week 3, Week 6, and Week 4 by using the Glasgow Coma Scale and the Chelsea Critical Care Physical Assessment Tool (Table 3).

Table
3: Follow-up details of the patient

Acute necrotizing encephalopathy is a crucial pediatric emergency linked to neurological morbidity, severe respiratory illness, and death [9]. It is a disorder marked by a respiratory or gastrointestinal illness, high fever, and fast changes in consciousness and seizures, and is a rare but unique kind of acute encephalopathy with a worldwide prevalence [1]. The brain is involved on a global level. This condition primarily affects children under five, and there is no gender predilection. Since the first instance was found by the Japanese researcher Mizuguchi in 1995, cases have been recorded all across the world, with more cases in Asia [4]. Patients become fast comatose and may experience convulsions. It is widely thought to be a para-infectious condition caused chiefly by viral infections [3]. ANE has no distinct clinical symptoms or indications, and the exact pathophysiology and risk factors are unknown.

The sickness reaches a peak in a few days. High fever lasts two to five days, and consciousness usually recovers after six to 10 days [10]. The prognosis for ANE usually is poor, although this has lately improved. Patients who have good outcomes may have a “mild” type of ANE, as reported by Yoshizawa et al. [11].

A well-planned interdisciplinary approach was followed for the patient. Family education plays a great role. Medical treatment includes various combinations of pharmacological agents to treat the root cause as well as to subside the current symptoms of the patient. It also prevents further deterioration of the patient’s condition by providing them with appropriate external mechanical support, majorly referring to the mechanical ventilation provided in this complicated case of acute respiratory failure.

In respiratory rehabilitation, proper lung health and bronchial hygiene were maintained by the therapeutic intervention like Manual chest percussion and vibration, use of a mechanical vibrator, chest proprioceptive neuromuscular facilitation, manual positioning, and passive end-expiratory pressure and later breathing exercises. In this case, the patient was in ICU and on a mechanical ventilator. Due to well-programmed intervention, the patient was kept more active in terms of mobility of all the joints and therefore the secondary complications were minimized. A weekly follow-up of the respiratory rehabilitation program for the patient’s current health status was planned and well-executed which helped in improving the patient’s condition and ultimately improving their quality of life.