Posted by: admin Categories: PHYSICAL REHABILITATION
Comments Off on C5 Nerve Root Palsy: An Uncommon Postoperative Complication and Its Management

Anterior decompression and cervical fusion is performed to remove the herniated disc, relieve patients' symptoms, and ensure functional recovery [1]. The anterior approach for incision provides the benefit of easy accessibility to the disc without disturbing the spinal cord, nerves, and neck muscles [2]. Depending on the levels affected, the disc is removed and the space between the two vertebras is filled with a spacer to provide stability to the spine and achieve fusion. Although the procedure can lead to various postoperative complications, it is widely used to ensure better postoperative recovery. The various postoperative complications associated with the method include dysphasia, damage to recurrent laryngeal nerve, neck pain, and other rare complications including fifth cervical (C5) nerve root palsy, and adhesive capsulitis.

C5 nerve root palsy is a rare complication of anterior decompression and cervical fusion, occurring without any known etiology but could be possibly iatrogenic and caused by structural variations [3]. In most cases, there is pre-existing asymptomatic damage to anterior horn cells leading to severe postoperative C5 palsy. Hence, it is important to be alert to possible postoperative complications so that prompt and early identification and management can be ensured [4,5].

We present a patient who underwent anterior decompression and cervical fusion at multiple levels - C4-C5 and C5-C6 - for traumatic prolapsed intervertebral disc (PIVD) and then developed a postoperative complication of unilateral C5 nerve root palsy.

The patient was a 58-year-old male who presented to the hospital with the primary concerns of tingling in both upper and lower limbs along with pain in the lower back region. He also reported reduced use of his right upper extremity for the last two months due to the above complaints. The patient had a history of heavy weight lifting two months back following which he started experiencing the symptoms. Intermittent tingling in the right lower extremity more than the left was also present for the last 20 years, for which he was conservatively managed by using a lumbosacral belt. Pain in the lower back was described as radiating to the posterior aspect of both lower limbs. The pain was mild in severity, 5/10 on the numerical pain rating scale (NPRS), and dull aching in nature. The pain aggravated on walking, with a history of claudication present at 200 meters, and relieved on sitting. The patient did not have any other comorbidity.

Table
1: Positive clinical findings of the cervical and lumbar assessment

Timeline of the current episode

The patient was admitted on 6/12/2021 to the hospital and, after a complete examination, a diagnosis was made of cervical disc disease with PIVD at C3-C4, C4-C5, and C5-C6 with lumbar disc disease with PIVD at L5-S1 with neuro-deficit. After mandatory screening for coronavirus disease 2019 (COVID-19), hepatitis B surface antigen (HBsAg), hepatitis C, and HIV, the patient was scheduled to undergo anterior decompression and spinal fusion at C4-C5 and C5-C6 on 8/12/21. The patient was then shifted to the recovery room for a day and then to the general ward for further care and conservative management of lumbar PIVD. The patient was then prescribed a home exercise program. 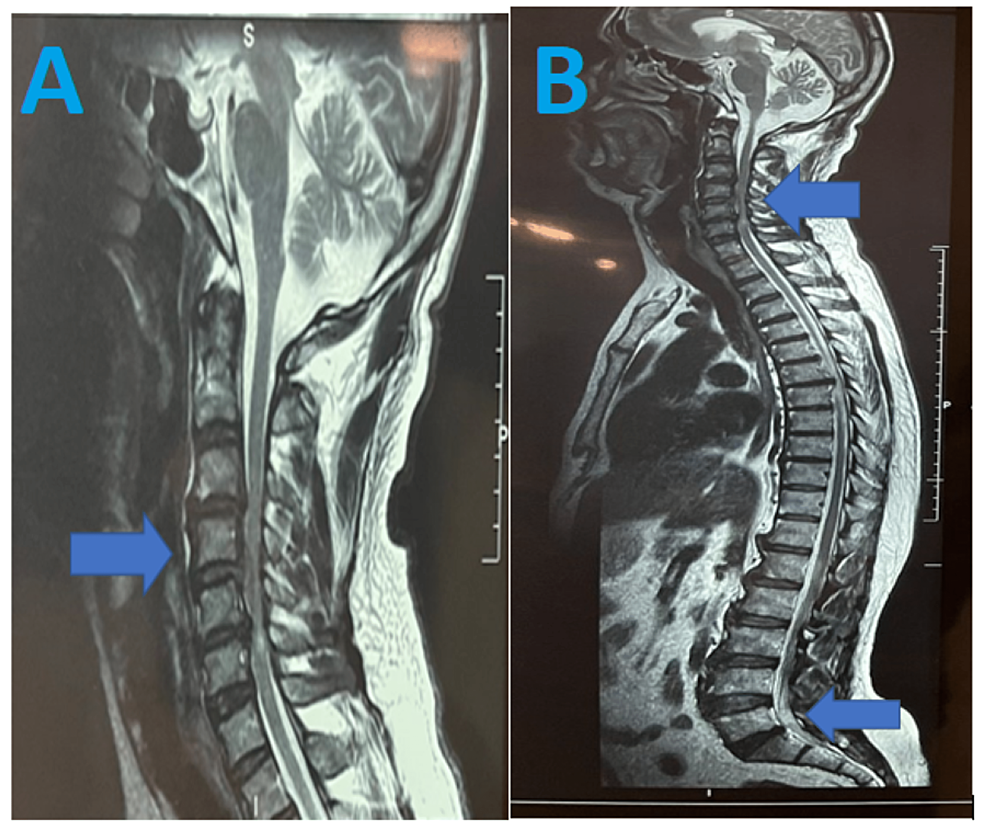 Figure
1:
MRI of the cervical spine

(A) The blue arrow indicates multiple levels (C3-C6) where diffuse disc bulge indenting over the thecal sac is seen. (B) MRI of the full length of the spine. The upper blue arrow shows a disc bulge at the cervical spine and the lower blue arrow is indicative of a disc bulge between the fifth lumbar and first sacral vertebrae 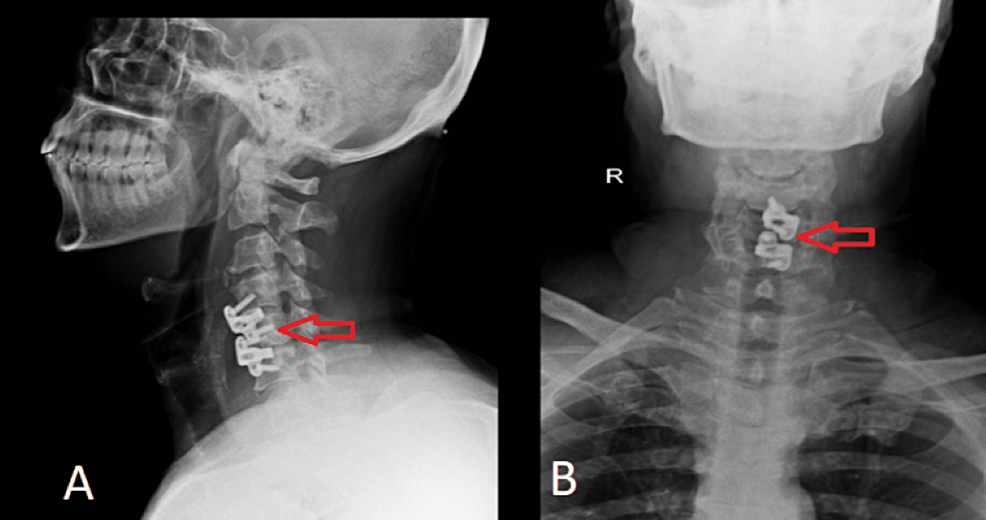 On the basis of MRI and clinical presentation, the patient was diagnosed with cervical disc herniation with radiculopathy, for which he was planned to be managed surgically.

The patient underwent anterior decompression cervical spine fusion surgery, which is a standard and widely accepted treatment of choice for severe cervical PIVD patients as it provides the benefit of easy accessibility to the disc without causing much damage to the nearby structures while also providing the stability to the spine. The patient was given general anesthesia in the supine position and a longitudinal incision of around 5 cm was done over the left sternocleidomastoid muscle. Osteophytes at the end plate at the C5 vertebra were removed. Discectomy at C4-C5 and C5-C6 was done. Two Jayon spacers of 2 mm were fixed with four screws (Figure 3). The mini drain was then placed. 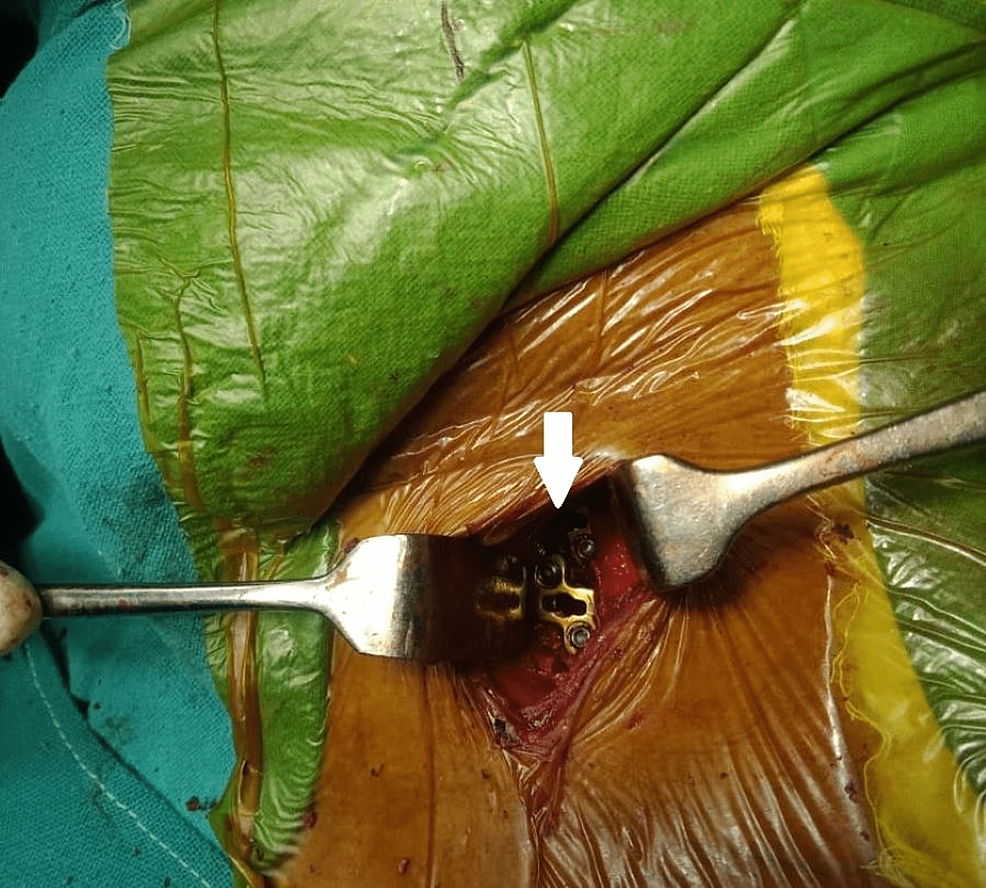 The intervention was started when the patient was shifted to the recovery room after eight hours of surgery. On physiotherapy assessment, the patient was diagnosed with C5 motor palsy. Hence, along with postoperative management for the cervical spine (Table 2), the patient was additionally managed for C5 nerve root palsy (Table 3) (Figure 4) and lumbar spine PIVD (Table 4).

Follow-up and outcome of interventions

The neck and upper extremity functional scale or neck disability index are used to assess the difficulty that individuals experience while performing activities of daily life, with a total score of 100 indicating no difficulty at all. The Neurogenic Claudication Outcome Score (NCOS) is an expansion of the Low Back Outcome Score developed by Greenough: a scale used to measure the severity of symptoms of claudication. It consists of eight questions which range from those related to when the symptoms begin, their severity, and to those that touch on the extent to which the symptoms are affecting the common activities of daily living. Each question has a choice of four answers from a to d with option ‘a’ being allotted 0 points and ‘d’ 6 points. A maximum score of 100 can be attained, which would indicate no asymptomatic condition. The patient had a post-rehabilitation score of 90, indicating minimal symptoms. The Medical Research Council muscle testing grading system is used to grade the strength of the muscle as assessed by manual muscle testing. It consists of 0-5 grades with 0 indicating no contraction and 5 indicative of the full range of motion against gravity, with maximal resistance. The comparison of preoperative and treatment values with postoperative values for the three outcome measures is represented graphically (Figure 5). 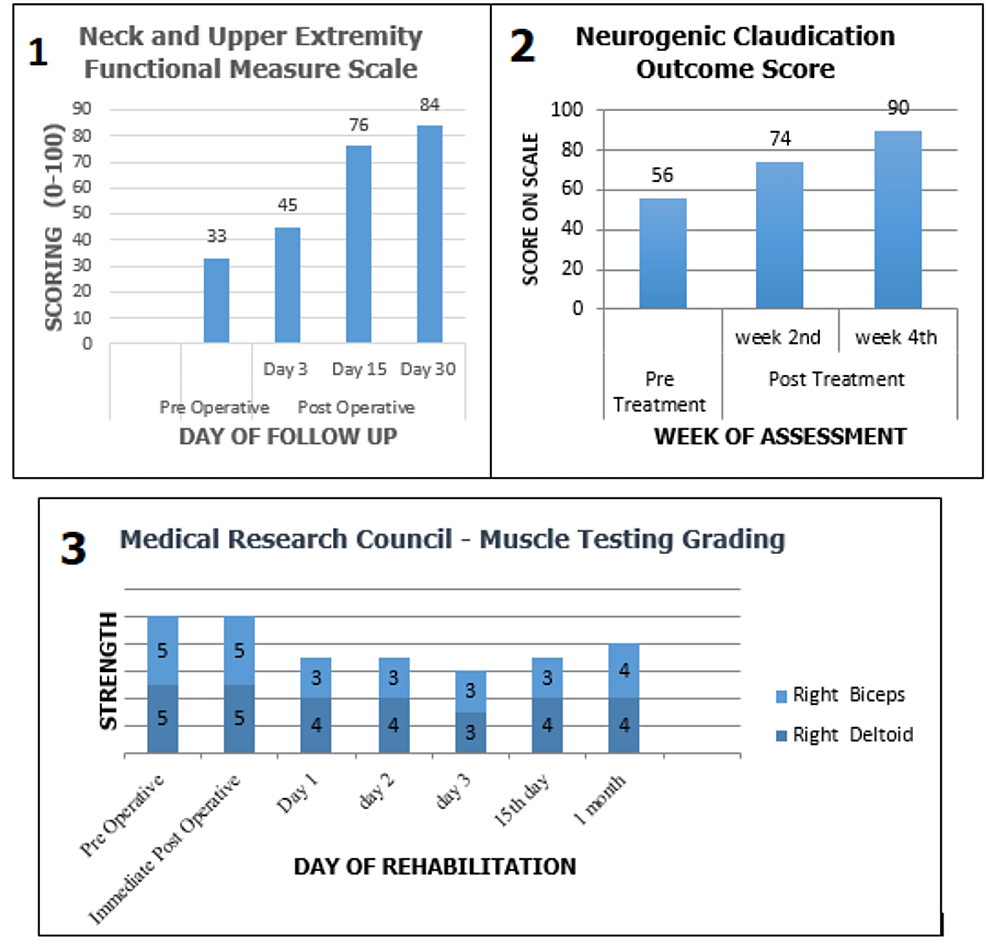 Graph 1: presents the comparison of the neck and upper extremity functional scale on preoperative day zero and postoperative days 3, 15, and 30. Graph 2: represents a comparison of the Neurogenic Claudication Outcome Score taken prior to the administration of the physical therapy treatment and values that were taken in the second and fourth weeks post-initiation of treatment. Graph 3: shows the initial decline and the gradual rise in the strength of the biceps and deltoid muscles post-rehabilitation taken at various intervals by manual muscle testing

According to a 2012 study by Kim et al., the prevalence of C5 nerve root palsy after anterior decompression and cervical fusion at multiple levels is 4.3% [6]. There is some debate about the exact cause, but the most likely cause has been identified as nerve root injury or spinal cord shifting resulting from nerve traction [7,8]. Despite being a debilitating complication, it is frequently overlooked in patients. It could cause deltoid and bicep muscle weakness, as well as loss of sensation in the C5 dermatome [9]. Our patient complained of cervical PIVD with a history of heavy weight lifting, as well as symptoms of lumbar PIVD due to age-related degenerative changes in the lumbar spine. Physical therapy has been shown to be effective in improving deltoid and bicep strength following C5 nerve root palsy and in managing mild lumbar PIVD conservatively. Kim SW et al.'s 2017 study reported on the successful conservative management of bilateral C5 nerve root palsy in a 58-year-old female patient [10].

Physiotherapy played a critical role in this patient's recovery by preventing surgery, enabling the patient to be managed conservatively for lumbar PIVD, and treating the patient for C5 motor palsy. Physiotherapy rehabilitation improved the patient's upper extremity functional independence while also alleviating the neurologic symptoms of claudication caused by lumbar PIVD. The current study discovered that after one month of intervention, the strength of the deltoid and bicep muscles improved. As a result, physiotherapy has been shown to be extremely beneficial. This case is unique in its own right due to the multiple pathologies and multidisciplinary approach used in treating that helped with improving muscle strength, reducing symptoms, and improving overall functional independence in a patient with postoperative side effects of C5 palsy following anterior decompression and cervical fusion at two levels along with lumbar PIVD.

We discussed the case of a patient with postoperative complications of C5 palsy following anterior decompression and cervical fusion at two levels, as well as lumbar PIVD. This report suggests that a multi-disciplinary approach, including medical, surgical, and physiotherapy rehabilitation, can prove to be highly beneficial in treating these patients in terms of improving muscle strength, reducing symptoms, and improving overall upper extremity functional measures. Early diagnosis and management of postoperative complication aid in achieving faster recovery and better prognosis.