Objective: To determine whether there is an association between low serum creatinine and mortality in severe COPD.

Methods: This is a retrospective study of serum creatinine values at admission and within the last year before admission. Outcomes measured were mortality at 30 days and one year after admission in patients with acute type 2 respiratory failure secondary to COPD, who were admitted over a one-year period to a respiratory ward (N = 130). The statistics were calculated using the chi-squared test.

Results: There appears to be a significant relationship between the one-year pre-admission creatinine values and mortality at one year (p = 0.0003).

Conclusions: The relationship with mortality appears to be stronger with pre-admission creatinine values rather than the admission values and appears to predict the patients at the highest risk of mortality one year after admission.

In chronic obstructive pulmonary disease (COPD), a low body mass index (BMI) is an adverse prognostic factor and is associated with an increase in mortality [1-4]. A composite score consisting of BMI, airflow obstruction, dyspnoea, and exercise tolerance (BODE index) is often used for prognostication in patients with stable COPD and is considered to be superior to the forced expiratory volume in one second (FEV1) alone for this purpose [5]. For prognostication during an acute exacerbation of COPD, a composite score of comorbidities including airflow obstruction, dyspnoea, exercise tolerance, and details of the severity of previous exacerbations (CODEX) was found to be superior to both the BODE index on its own or when the BODE index was used in conjunction with additional information about previous exacerbations (BODEX) [6].

Serum creatinine values depend in part on muscle mass and are commonly measured as part of the routine assessment in patients admitted to the hospital with different conditions, including an exacerbation of COPD. These values are also measured quite frequently in primary care, as part of chronic disease monitoring. A previous study in unselected patients admitted to intensive care has shown both high and low serum creatinine values to be associated with increased mortality risk [8].

The DECAF (dyspnoea, eosinopenia, consolidation, acidemia, and atrial fibrillation) study on factors that predict hospital mortality in patients with COPD exacerbation included baseline serum biochemistry at the time of admission but did not include historical pre-admission creatinine values [9]. As creatinine values can also rise acutely, due to many other conditions such as the presence of renal impairment or infection, the values measured at the time of admission may be less reliably correlated to the muscle mass in an individual and this may explain why in the DECAF study a low creatinine value was not identified as a risk factor for mortality. If this is the case, it may be that the creatinine values measured during periods of stability, such as samples taken routinely in primary care, may have a better correlation with the muscle mass in an individual patient.

We postulate that low serum creatinine values either at the time of admission or before admission may be associated with an increased risk of mortality in patients with severe COPD. If this is found to be the case, it would offer the advantage of the ready availability of a prognostic indicator, as this test is frequently performed both in the primary care and secondary care setting. If so, it may help to identify patients at risk of adverse outcomes promptly.

Patients who receive non-invasive ventilation (NIV) for acute type 2 respiratory failure (commonly secondary to COPD) are at high risk of dying with an inpatient mortality rate of 34% in the British Thoracic Society national audit on NIV, 2013. We wanted to see if there would be a significant difference in mortality in this group of patients based on their admission or pre-admission creatinine levels.

The study was approved by the Health Research Authority, Health and Care Research Wales (IRAS project ID: 254977), and by the Hospital Research and Development department. We undertook a retrospective observational cohort study in patients with severe COPD, who were admitted with acute type 2 respiratory failure and treated with NIV. All patients who had received NIV for the treatment of acute type 2 respiratory failure secondary to COPD in a respiratory ward in Royal Blackburn Teaching Hospital (Lancashire, United Kingdom) in 2013 were included in the study. The diagnosis of COPD was confirmed by a review of the discharge summaries, clinic letters, or patient notes, and any patients where NIV was used for indications other than COPD (such as obesity hypoventilation or neuromuscular disease resulting in type 2 respiratory failure) were excluded. The study was performed in 2019 and the reason for selecting the cohort from 2013 was to ensure complete data capture to evaluate one-year mortality after discharge.

We performed a chi-squared test to see if there were statistically significant differences in mortality rates observed in patients with low admission or baseline creatinine values, compared to patients with normal values, at 30 days and one year after discharge.

Table
1: Mortality differences between patients with low admission or pre-admission creatinine values when compared to others at 30 days and one-year post-admission 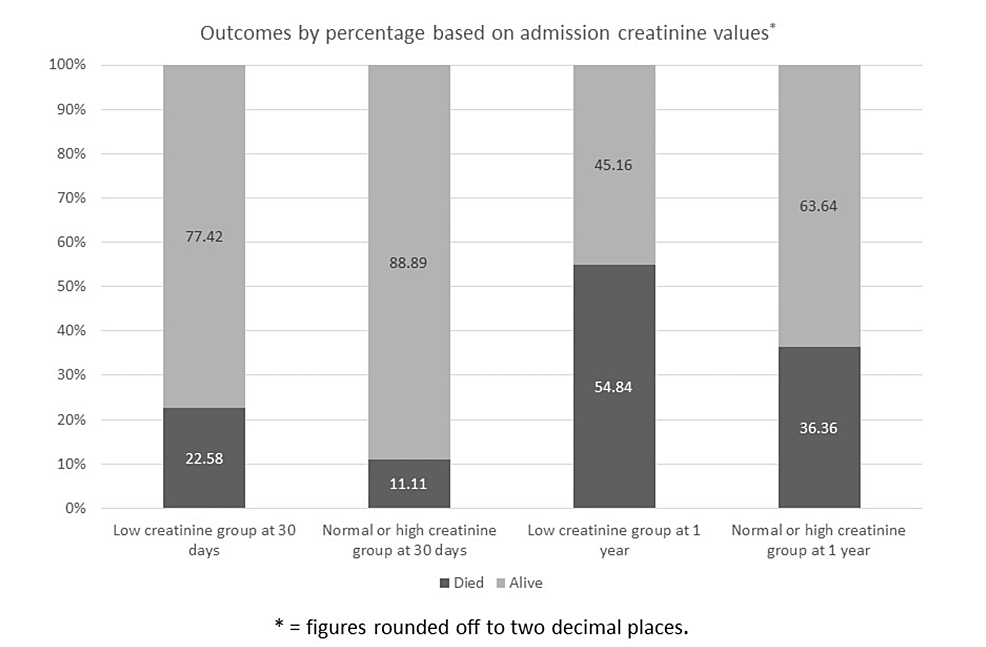 Figure
1:
Mortality at 30 days and one year based on admission creatinine values 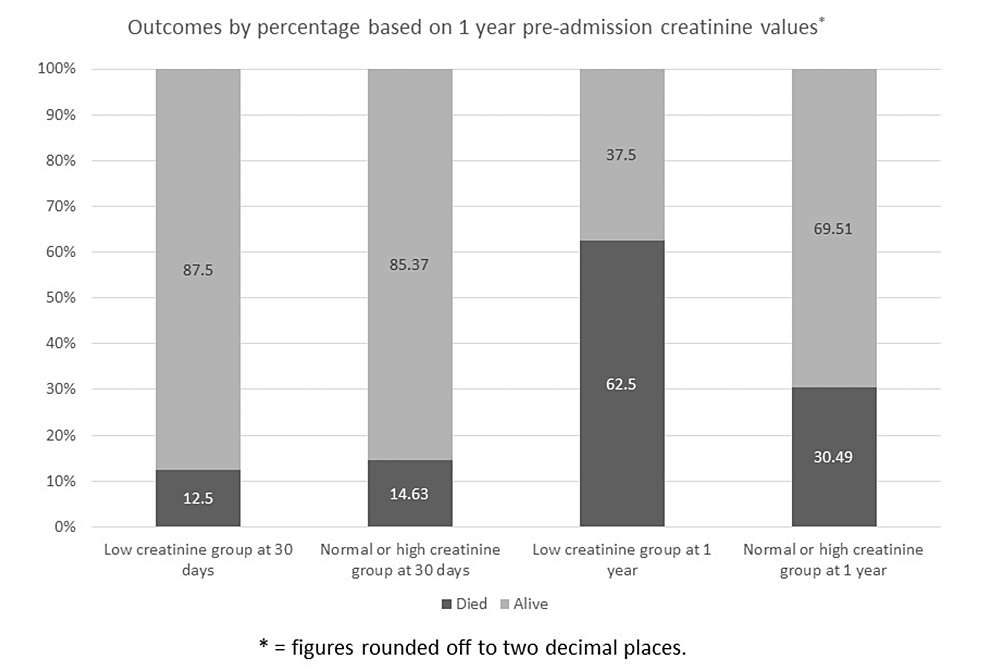 Figure
2:
Mortality at 30 days and one year based on pre-admission creatinine values

Low BMI has been known to be an adverse prognostic indicator in patients with COPD, but muscle mass may be superior to BMI in this respect [7] or to show additional information than BMI [4]. Measurement of fat-free muscle mass or mid-arm muscle area is complex. In studies, this has been calculated by using equations incorporating various other factors such as mid-arm circumference, BMI, skinfold thickness, and estimation of fat mass [7]. This complexity makes the use of endpoints such as these problematic in day-to-day utilization in the care of patients with COPD. In addition to this, although there is a suggested method of categorizing cut-offs for low fat-free muscle index [10], there is no official guidance on this subject.

Serum creatinine values are routinely checked during hospital admissions and frequently measured in primary care. Although the values of serum creatinine can be influenced by a variety of factors such as intrinsic renal disease, use of nephrotoxic medications, and presence of systemic illness, values also depend on underlying muscle mass [11]. As some of these factors are more likely to be present during the period of hospitalization, it would be expected that measurement of serum creatinine values during stable conditions, perhaps in primary care, would be more closely related to the actual muscle mass than those which are measured during periods of hospitalization, as the latter ones may be falsely elevated by factors such as acute kidney injury or use of nephrotoxic drugs. This may explain why in the DECAF study low serum creatinine was not noted to be a significant factor that influenced mortality, as only the values on admission were considered.

In our study, we find that although there were no significant differences in mortality between patients with low creatinine values and others at 30 days post-admission, there appeared to be a trend toward significance at one year when patients were identified based on the admission values, and a highly significant difference when the patients were identified based on pre-admission creatinine values. This suggests that the differences in mortality may be apparent on a medium to long-term basis rather than in the immediate post-admission period. Previous studies have shown that an increase in BMI through nutritional support improved survival [3] and quality of life in patients with COPD [12]. If further studies (ideally done prospectively) confirm the value of low serum creatinine as a useful prognostic marker in identifying patients at increased risk of death, it may be possible to improve outcomes by offering nutritional support to these patients, especially as the increase in mortality is not in the immediate post-discharge period.

The identification of a greater number of patients with low serum creatinine based on pre-admission values rather than the admission ones appears to suggest that some of these patients did develop an increase in their creatinine values, which might reflect acute deterioration in their overall health. This may explain the lack of significant differences in mortality based on admission values is in part due to the death of these patients in the low creatinine comparative group.

It would be recommended to confirm the findings of our study by performing a prospective study where other important factors such as the patient’s BMI, nutritional status, and severity of airflow obstruction can also be considered to assess the differences in mortality.

Tags: COPD exercise pulmonary pulmonary diseases respiratory
« Children First: Focusing on your child’s mental health
What is mouth taping and will it fix your bad sleep? »