Posted by: admin Categories: PHYSICAL REHABILITATION
Comments Off on Acknowledging the Fears of Cancer by Giving Them a Face and a Name

To understand why Beau Gill built a mental cupboard for Jeff and Spike, first you must travel back with him to the small town of Catemaco in Mexico’s state of Veracruz.

It was years ago and he was a bit of a lost soul. Having spent 15 years building a photo studio in London, England, that came to an unpleasant end, he was seeking a fresh start and Mexico appealed. As he wandered Catemaco’s streets in the days after Christmas, he began seeing effigies by people’s front doors – old men wearing straw-stuffed overalls with a liquor bottle propped in the crooks of their left arms.

On New Year’s Eve, he realized that these effigies, called El Viejo, were also stuffed with fireworks as people took them into the streets and ignited them. It was a brilliant conflagration to close the old year and welcome the new.

Believing it's more important to personify medical adversaries than demonize them, Beau built a cupboard in his mind where Jeff and Spike stay. Some days he invites them out for a few minutes of reflective conversation – what they’re up to that day, how they’re making him feel, the things he can do to shoo them out the door. Then back in their cupboard they go so he can think about other things and enjoy the day with his wife, Barb Miller.

Because Beau has cancer – several kinds, in fact – it would be easy to define him by a chronology of diagnoses, by lists of treatments and drugs, by doses, by symptoms, by calendar dates of visits to the emergency room. It often happens to people diagnosed with cancer.

But in his occasional conversations with Jeff and Spike, in his passion for photography, in his peaceful afternoons with Barb, in his undimmed relish for life at age 84, Beau embodies a central truth of cancer treatment and care: He is a person before he is a patient, and he is so much more than a palmful of drugs or a directed beam of radiation.

It’s a truth embraced by his multidisciplinary care team at the University of Colorado (CU) Cancer Center.

“Beau is such a delightful guy,” says Tejas Patil, MD, CU Cancer Center member and assistant professor of medical oncology in the CU School of Medicine. “When I first met him, he was in bad shape with aggressive lung cancer. But he’s having a fabulous response to his therapies and most importantly, he’s been able to get back to wildlife photography and so many other things he enjoys in life.” 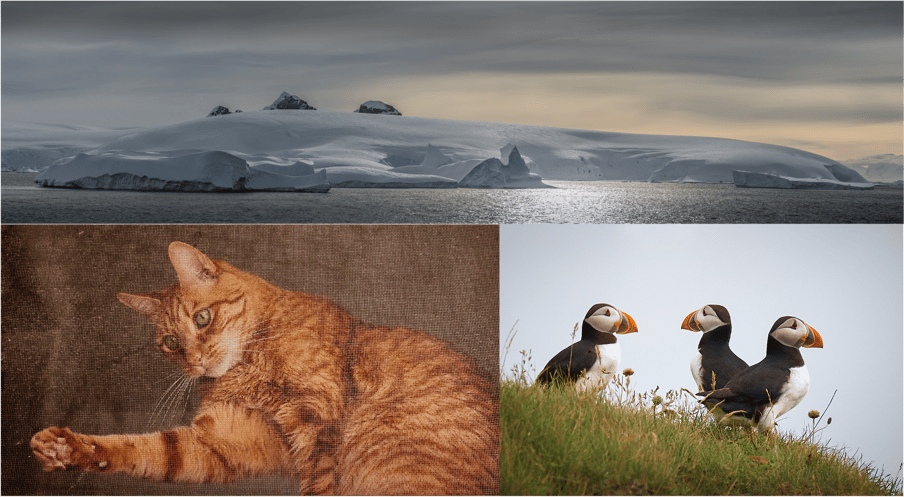 An important thing to know about Beau: Beginning at age 9, he had a camera in his hands. At first it was a Brownie and he would do “kidnappings” around his neighborhood – knocking on the doors of people he knew and asking if he could borrow the kids to practice taking portraits.

Through travels around the world, through work and relationships, in the cabins of small aircraft he’s flown for decades, on the decks of sailboats, there’s almost always been a camera nearby.

In fact, it was at a photography convention in Florida that Beau spotted a lovely woman during Photoshop seminar. He and Barb got together in 2004 and have hopscotched the globe since then. In the richness of their experiences they have stories that begin with an elephant sanctuary in Bali, say, or an aquarium in Manuel Noriega’s former nightclub in Panama City. They lived in Half Moon Bay, California, for several years, where Beau did a lot of sailing and Barb opened a gallery and got involved with land trust projects. 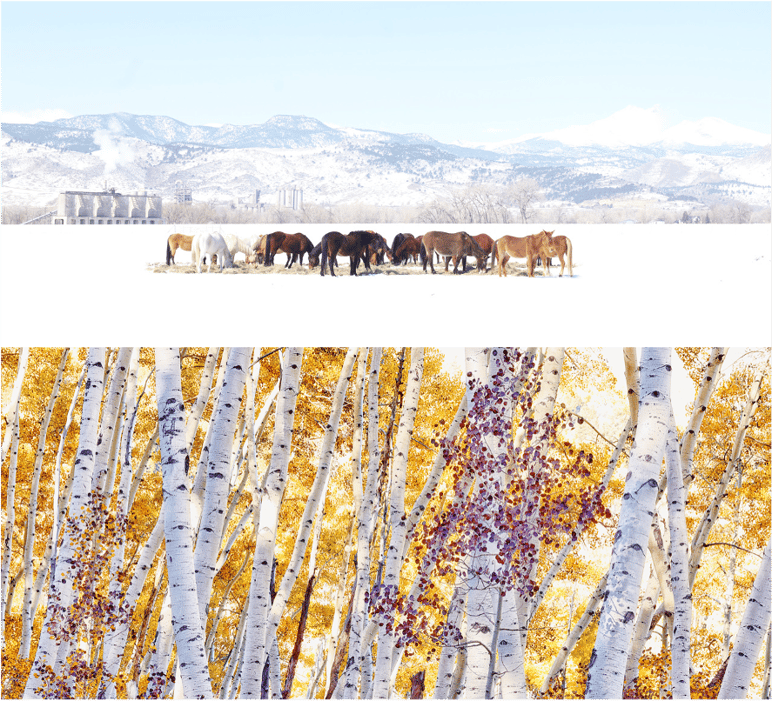 The only thing slowing Beau down was breathing that was getting more labored. He doesn’t hide the fact that he had a 50-year smoking habit, and in 2008 he was diagnosed with chronic obstructive pulmonary disease (COPD). Two years later, he had the unwelcome surprise of a melanoma diagnosis, which was treated with a seven-hour surgery including lymph node removal.

In 2013, after many discussions in which they admitted they loved California but it didn’t feel like home, Beau and Barb were looking for a place that would feel like home. Barb’s elderly parents were in Kansas and she wanted to be closer to them, so a visit to Denver led to the feeling they’d been seeking: They had come home.

Beau began working with Bill Vandivier, MD, a professor of pulmonary sciences and critical care in the CU School of Medicine, and doing regular pulmonary rehabilitation. He also joined a support group “that really got me thinking about what it meant to have this disease,” Beau says.

Because of this consistent care, Beau was able to quickly get a bronchoscopy after scans showed two nodules on his lungs. The results indicated squamous cell lung cancer, and several targeted radiation treatments followed.

A few years later, and seemingly out of the blue because he’d had no symptoms, Beau’s multidisciplinary care team discovered he had metastasized prostate cancer. Working with CU Cancer Center member Elaine Lam, MD, Beau's treatments included hormone therapy, to which he responded extremely well. The therapy did, however, cause hot flashes and Barb laughs remembering that she was only a little sympathetic.

Beau’s strong response to the treatments for prostate cancer notwithstanding, in 2019 his care team discovered two nodules in his lungs that were adenocarcinoma, a different type of lung cancer.

“This new lung cancer wasn’t a relapse, but it was more that he had a second primary,” Patil explains. “He’d had a situation where he felt pressure in his abdomen and there was a concern that it was the prostate cancer spreading, but a biopsy showed it to be lung cancer. Now we had a stage 4 lung cancer, so we started doing some detective work.”

Patil initiated molecular testing to figure out if there were any mutations in the lung cancer that immunotherapy could target. Beau tested very high for the PD-L1 expression, so Beau and his treatment team decided on a course that included two rounds of chemotherapy and the drug pembrolizumab.

After Beau’s first treatment in December 2020, a scan showed all the spots on his lungs had grown. “I got nervous that he was actually not responding,” Patil recalls. “I told Beau, ‘Look, there’s a very small possibility this could be pseudo-progression.’”

Pseudo-progression is a rare response that happens sometimes in immunotherapy, in which cancer spots swell as the immune system aggressively attacks them.

“I told Beau, ‘It sounds like you’re feeling better despite what the scan is showing, so let’s get another scan in one month,’” Patil says. “I was nervous doing this because I could have been wrong, but the thing that really clued me in was he was feeling better even though his scans looked worse. And his scan a month later showed rapid improvement.”

Since then, Beau’s lung cancer has largely regressed and he continues taking pembrolizumab. His last eight scans have looked the same and shown no growth in the two spots on his lungs.

Perhaps most importantly, the positive response that Beau has shown to immunotherapy means that he doesn’t always have to think about immunotherapy, or lung cancer, or even the next doctor’s appointment. He can think about where the birds might be.

Whereas before his immunotherapy treatment Beau had been close to bed-bound, now he and Barb climb into their white Dodge van for photo expeditions. Sure, there have been adaptations – a stepping stool to get out of the van, added support for his longest and heaviest lenses, an oxygen tank on wheels that he calls R2-D2 – but these seem a minor concession compared with life’s boundless capacity to be interesting and beautiful. 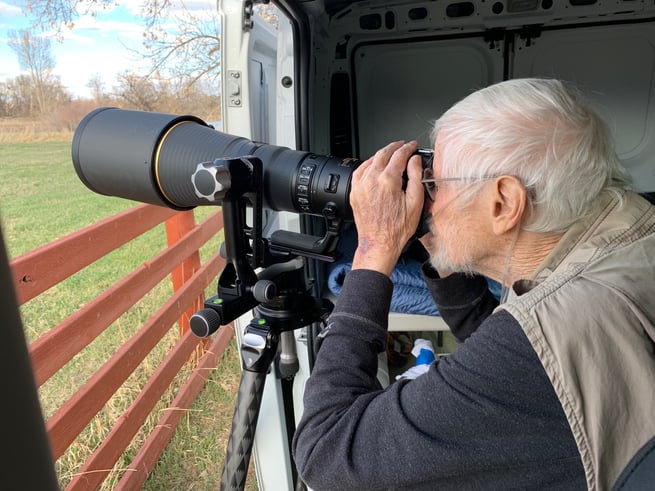 Beau and Barb even moved from their previous and much-loved condo in downtown Denver to a home next to open space in Boulder, where the view out the dining room window is a stunning Rocky Mountain panorama. The walls of their home are a gallery of cherished moments, from the penguins and icebergs they saw in Antarctica to the blue herons in flight they saw closer to home.

Two cats who might be just a little spoiled keep them company while they work on their various projects, and Beau only opens the cupboard door to Jeff and Spike when he decides that it’s time for a chat.