Posted by: admin Categories: SPORTS & ATHLETICS
Comments Off on Hospitals scramble to cope with elderly influx 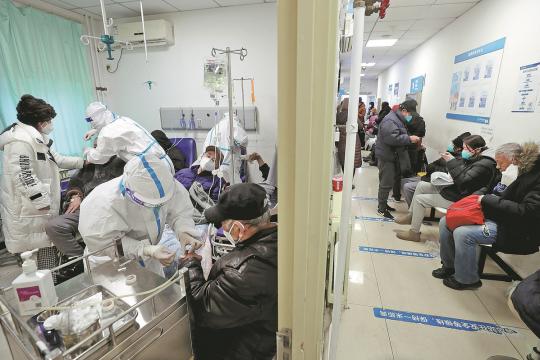 Fever clinics and emergency rooms in Beijing are racing to boost the number of critical care beds to cope with rising hospitalizations among older COVID-19 patients.

The China-Japan Friendship Hospital's fever clinic on Tuesday was packed with gray-haired patients, many in wheelchairs accompanied by children. New arrivals had to elbow through the crowd as they sought advice, to pay bills or to pick up drugs.

The clinic used to have 18 single-bed isolation wards capable of providing intensive care.

To cope with the surge in hospitalizations, all the wards have been turned into double rooms and empty space has been put to use. This has raised the number of beds to 40.

Breathing machines and other critical-care devices have been transferred from less strained departments or purchased. As expected, the new beds have been quickly taken by luckier patients.

Cheng Hongwei, a male nurse overseeing 18 beds, said only two patients under his care were younger adults in their 50s. The rest were all in their 70s or older. The oldest was 93.

Doctors at the clinic said thatmen outnumbered women among older patients by a large margin.

A woman, who only gave her surname as Lin, said she had taken her parents to the clinic five times this month. All three were infected.

Her taciturn, 91-year-old father, who is wheelchair-bound, had been wrestling with shortness of breath, recurring fever and other COVID symptoms for a week. Doctors at the clinic said the man had large white spots on his lungs, a sign of pneumonia.

"There are no beds so I can only keep bringing them here to be given an intravenous drip," Lin said, adding that she planned to try her luck at the hospital's emergency department later in hopes of getting her father a bed.

Her 90-year-old mother, who is also suffering from repeated fever, chimed in: "This is so troublesome for us old people living in high-rises." 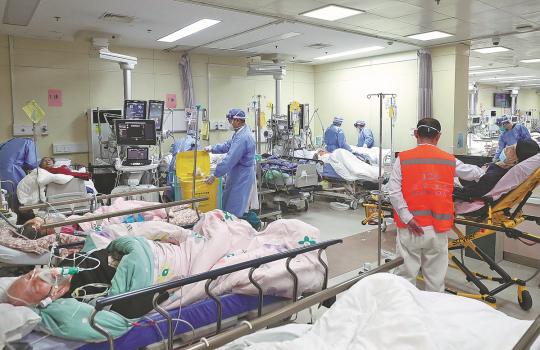 To prioritize their treatment, the center no longer doles out first aid based on arrival and has decided to let those without life-threatening conditions wait, she said.

"I hope Beijing residents will understand our decision," she said.

Elderly people were among the worst-hit groups as Omicron-fueled outbreaks have swept across the country in the past month.

Dong Weiming, an emergency doctor in Yinchuan, Ningxia Hui autonomous region, said that earlier this month, visitors to his hospital were mostly younger adults who commute to work, but as time passed, the number of older patients had soared.

"They are typically in their 50s or older," he said.

Guo Shubin, deputy head of the Beijing Chaoyang Hospital, said hospitalization can be lifesaving for patients older than 70.

Health officials have warned that older adults are lagging behind in getting inoculated due to concerns over adverse reactions.

Official data showed that around 239.4 million, or 90.6 percent, of people aged 60 and older had received at least one shot by Nov 28.

The ratio of those aged 80 and above having received one shot, two shots and booster shots were still lower, at 76.6 percent, 65.8 percent and 40 percent, respectively.

China has been racing to raise the inoculation rate among older adults in recent weeks. The mainland administered 3.1 million doses on Dec 20 and 3.6 million the following day, up from the daily average of less than 1.5 million in the previous two weeks, National Health Commission data shows.