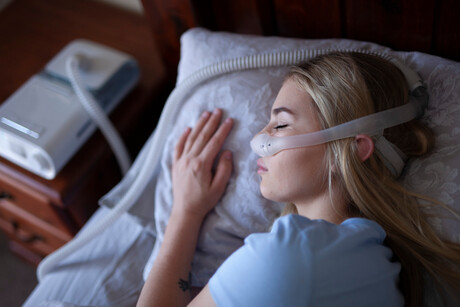 A new study at the University of Gothenburg’s Sahlgrenska Academy has paved the way for a potential drug treatment for sleep apnoea — a condition whereby patients experience brief, recurrent pauses in breathing during sleep.

Besides impairing sleep, sleep apnoea is a risk factor for both high blood pressure (hypertension) and stroke, and has been linked to an increased cancer risk. Current treatment involves either oral appliance therapy or a CPAP (continuous positive airway pressure mask) to help to maintain airway patency during sleep, but these therapy options take time to get used to and are frequently perceived as intrusive or bulky. Insufficient user time is therefore common.

The researchers set out to treat sleep apnoea via carbonic anhydrase (CA) inhibition, CA being an enzyme that serves to maintain a balance between carbonic acid and carbon dioxide in the body. Several drugs with CA inhibitory properties are already available on the market, and used for treatment of glaucoma, epilepsy and other disorders. The drug used in this clinical trial was sulthiame, which is sometimes used to treat epilepsy in children.

The study was a randomised double-blind clinical trial, completed by 59 patients with moderate or severe sleep apnoea. Patients were randomly assigned to two groups receiving either 400 or 200 mg of the CA inhibitor and a third group (the control group) that received a placebo. The study lasted for four weeks, with the results published in the American Journal of Respiratory and Critical Care Medicine.

Overall, the treatment reduced the number of breathing pauses and promoted oxygenation during the night. A few patients experienced side effects, such as headache and breathlessness, which were more common in those receiving the highest dose.

“Among the patients who received the higher dosage of the drug, the number of breathing pauses decreased by approximately 20 per hour,” said Jan Hedner, Professor of Pulmonary Medicine. “For just over a third of patients in the study, only half of their breathing pauses were left, and in one in five the number fell by at least 60%.”

The study results, together with established safety data for sulthiame, provide support for continued research on CA inhibition as a new potential treatment for obstructive sleep apnoea. Indeed, the fact that several approved drugs in the CA inhibitor category are available on the market makes fast-tracking development of an approved drug for sleep apnoea practicable.

“If we develop an effective drug, it will ... make life easier for many patients and, in the long run, potentially also save more lives,” said Ludger Grote, a Senior Lecturer at Sahlgrenska Academy.