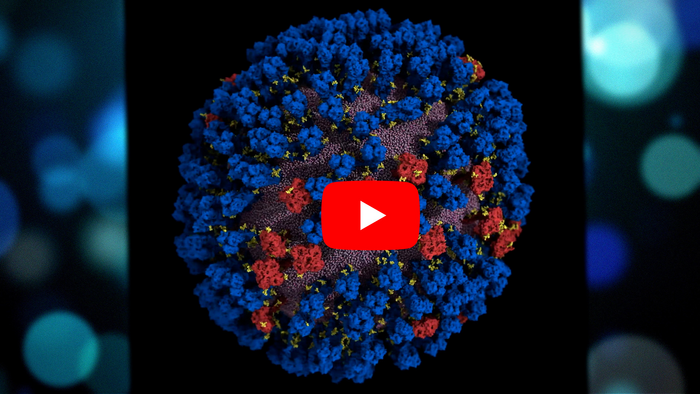 image: Simulations show the motions of two proteins on the influenza A virus that could be exploited to better defend against the flu.
view more

The potential “tripledemic” of influenza, SARS-CoV-2 and RSV (respiratory syncytial virus) infection continues to be a concern. Vaccines remain the best defense against COVID-19 and influenza, with the flu vaccine mainly targeting two proteins on the virus’s surface. Now, researchers in ACS Central Science report that simulations show the proteins can tilt and wave in “breath-like” motions, which could be exploited to better defend against the flu. Watch a video of the proteins here.

The flu virus sickens people by sneaking past their immune defenses, entering cells and then replicating. Hundreds of hemagglutinin (HA) and neuraminidase (NA) proteins cover the viral particles, helping the particles get into cells and helping new virions leave. But researchers have a limited understanding of how these proteins move in vivo — information that could assist scientists in developing a universal flu vaccine and more effective antiviral drugs. So, Rommie Amaro and colleagues at the University of California San Diego wanted to simulate the whole influenza A virion and look at the proteins’ movements and interactions for potential weaknesses.

The researchers conducted detailed simulations of the 161 million atoms of the influenza A H1N1 virion, commonly referred to as swine flu, and found that both HA and NA are quite flexible. Here are the details:

Finally, the simulations showed that the HA and NA proteins could clump together with up to five nearby HA and/or NA proteins and then form even larger aggregates involving tens of proteins. By clustering, the two proteins could contend for the same receptors on host cells, potentially affecting the virus’s entry into or exit from cells, the researchers say. They conclude that these first-of-their-kind visualizations show many new vulnerable states of flu viruses, which could improve future vaccines and antiviral drugs.

The American Chemical Society (ACS) is a nonprofit organization chartered by the U.S. Congress. ACS’ mission is to advance the broader chemistry enterprise and its practitioners for the benefit of Earth and all its people. The Society is a global leader in promoting excellence in science education and providing access to chemistry-related information and research through its multiple research solutions, peer-reviewed journals, scientific conferences, eBooks and weekly news periodical Chemical & Engineering News. ACS journals are among the most cited, most trusted and most read within the scientific literature; however, ACS itself does not conduct chemical research. As a leader in scientific information solutions, its CAS division partners with global innovators to accelerate breakthroughs by curating, connecting and analyzing the world’s scientific knowledge. ACS’ main offices are in Washington, D.C., and Columbus, Ohio.

Disclaimer: AAAS and EurekAlert! are not responsible for the accuracy of news releases posted to EurekAlert! by contributing institutions or for the use of any information through the EurekAlert system.