My Invisible Disabilities Mean I Live in a Bubble, but I’m Still Empowered

Posted by: admin Categories: PREVENTION & WELLBEING
Comments Off on My Invisible Disabilities Mean I Live in a Bubble, but I’m Still Empowered

If we were to meet in person, you’d never know the challenges I struggle with or how much planning it takes for me to live each day without having a medical emergency. Even when people do know that I have two primary “invisible disabilities,” my conditions are so rare that most people don’t understand them. So, let me explain that I have mast cell activation syndrome (MCAS) and Ehlers-Danlos syndrome (EDS).

Mast cells are supposed to help your immune system protect you from infection. But with MCAS, the mast cells mistakenly release too many chemical agents and cause severe reactions to ordinary things. For me, my body goes into anaphylaxis—where my airway closes up and I have a hard time breathing—in reaction to tons of things including most foods, medications, heat, cold, and stress. I often don’t know what will trigger a reaction so I only eat the same 10 foods in the same order every day, and I limit my exposure to anything new. I live in constant fear of reacting to something that could kill me. In essence, I am a bubble girl who is allergic to more things than I am not.

EDS is a connective tissue disorder that often goes hand in hand with MCAS. EDS causes overly flexible joints, weakened blood vessels, and problems with the heart, intestines, and uterus, among other things. My EDS has also led to postural orthostatic tachycardia syndrome (POTS), which causes an increased heart rate, lightheadedness, and near black outs when I go from sitting to standing. POTS is a form of dysautonomia, a disorder of the autonomic nervous system, which controls involuntary functions like breathing, heart rate, and digestion, so all of those systems in my body that should regulate themselves normally don’t work well, which drastically limits how I live.

It was years before I was taken seriously

It wasn’t until I was in my 40s, in 2018, that doctors figured out that I have MCAS. And it was just in 2021 that I was diagnosed with EDS. After a lifetime of bewildering symptoms, years of being dismissed by my family and doctors, and constantly being told that my issues were all due to anxiety, receiving these diagnoses helped explain so much about myself and it validated that my symptoms weren’t only “in my head.”

The years where my family and doctors didn’t take me seriously, however, took a major toll. I grew up in the Midwest and once I got old enough, I sought out many specialists and therapists. I was also in and out of emergency departments frequently, but each time, the doctors couldn’t isolate an underlying illness. My fast heart rate and gastrointestinal symptoms were chalked up to panic attacks. When I couldn’t eat because food would make my throat close up and I would choke—causing me to become seriously underweight—I was told I had an eating disorder. My extreme dizziness was brushed off as a fluke. And my fatigue and inability to keep a 9 to 5 job was deemed laziness.

How art helped me through

In the early 2000s, I had to quit college and I physically couldn’t get to work. Over the years I had worked as a receptionist and a dental assistant but I couldn’t maintain regular hours, which was incredibly frustrating. One of the only things I could do from home was create art. I didn’t use traditional mediums because I had allergic reactions to water colors, oils, and colored pencils. But I could paint digitally, and I put all of the pain and challenges I was confronting into my portraits. It became a huge part of my therapy.

I’d never wanted to be an artist before, but in many ways, my art kept me alive. A friend encouraged me to start showing my work in galleries, and it resonated with people. Art became a way for me to connect with a community outside of my isolated existence, and eventually I began to make money as an artist. I also turned my passion for art into a career in website design and digital marketing where I could work from home, build my own agency, and keep part-time hours.

But I was still really struggling with my mysterious symptoms. At one point, about 10 years ago, I essentially gave up. I thought maybe I was crazy and everyone else was right. I checked myself into three psych wards, one after the other. The first two were not right for me but the third one changed my life. There, for the first time, somebody acknowledged that I didn’t actually have an eating disorder, and that there was something else preventing me from getting food down. I was given a formula to drink that is typically used for feeding tubes, and I didn’t have a bad reaction to it. Finally, I was able to get nourishment and I gained 10 pounds in one month.

Throughout much of this time, I had a boyfriend who was wonderful to me. But my illness destroyed our relationship. He was put in the position of being my caregiver and it just changed the dynamic of our relationship. It wasn’t good for us, no matter how much we loved each other. So after 15 years together, we separated in 2016 and I moved to Oregon for a fresh start. 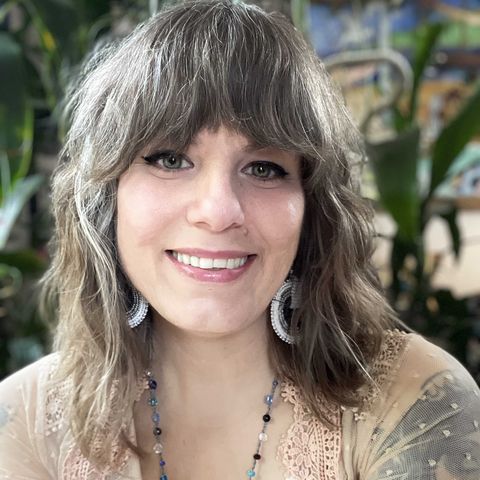 Living with my multiple invisible disabilities

At that point, I’d identified the 10 foods that my body could tolerate without having a life-threatening reaction, and I began to eat those same foods in the same order daily. I also started getting some answers about my health. A specialized allergist confirmed I had MCAS. But I didn’t begin taking medication for the illness at that time because I was worried about how my body would react to it.

Then in 2018, I had such a severe anaphylaxis episode that I went to the hospital and told them that I believed I was having a mast cell reaction. The staff there knew what that was and gave me the right medication. Within 10 minutes of taking the medication, my whole body calmed down and I was sleeping peacefully.

After I left the hospital, I continued taking the medication, and went from having three to five allergic reactions a day to about three to five a month. It was amazing. It turned out that I’d been in non-stop autonomic nervous system overdrive, which is like having a panic attack 24/7.

Taking the medicine got me to a much more stable place. I was able to paint with watercolors, which allowed me to develop my art further, and I worked on my photography, too. I even felt strong enough to work more hours, and my digital marketing agency grew.

In 2021, I found another specialist who diagnosed me with EDS. That’s when even more of the pieces began to come together. I learned that I’d been doing so many things my whole life to compensate for EDS, which causes extreme joint instability. For instance, I always wore high boots not realizing that I found them comfortable because they stabilize my ankles. I also finally understood why I was always tripping and falling and could never really feel where my body was in the world.

Since then, I’ve purchased braces for my knees, elbows, fingers, and neck, which I use when I’m doing things that might strain those areas. I’ll never forget the moment I put the knee braces on for the first time and stood in my living room, and felt stability. I thought, this must be what standing feels like to people who can hold their body up.

My journey has been epic. It’s been awful and beautiful, but I feel very lucky to be where I am now. These days I’m in a loving relationship with a long-term boyfriend, I’m immersed in my thriving career, and my art has now been shown in hundreds of exhibitions around the world. I also marvel at how my art has transitioned from darker topics to lighter ones. What started as a source of healing and connection has become a visual representation of my personal progression. I’m proud of how far I’ve come.

Of course, it’s hard to live feeling like I have a ticking time bomb inside of me that could blow at any time. So I live life very much in the “now.” I can’t guarantee 10 minutes from now, a day from now, or a year from now, so I’m really living it up in this moment.

Back to the We Are Not Invisible project