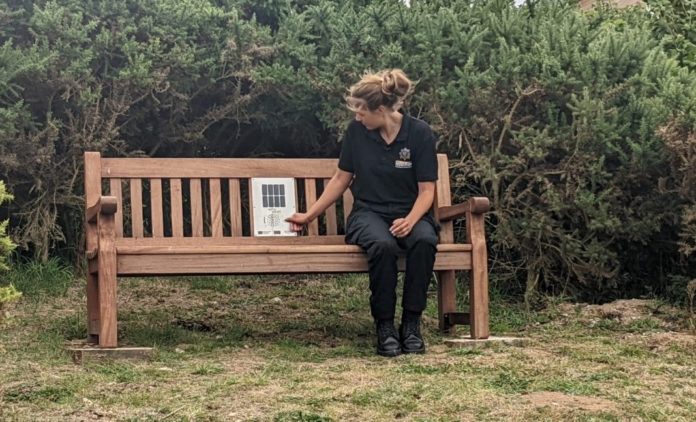 Firefighters in Cornwall have road-tested an innovative bench which uses soothing sounds and mindfulness to help them de-stress.

The crew at Tolvaddon Fire Station, near Camborne, have trialled the new ‘sonic bench’, and researchers at the University of Exeter have helped its creator to gather feedback.

The bench is the creation of Justin Wiggan, of Flushing-based Glass Twin, which specialises in using sound to help lower agitation and build resilience. Users sit down and press a button and are guided through a breathing exercise. The relaxation is accompanied by soothing sounds chosen by the firefighters, such as bird song.

Wiggan said: “Wellbeing is absolutely crucial in our fast-paced pressurised world, and firefighters work in particularly high stress situations. The bench is designed to provide a safe space. It guides users through a breathing activity, designed to lower agitation and to help create a calmer state of mind.”

Black Watch crew manager John Navin said firefighting was a stressful job. “This bench is a way of providing a release from the stresses and strains of work and of life, and that’s so important,” he said. “It provides a bit of peace and quiet, and an opportunity to reset.”

The bench is available for use by both firefighters and control staff, who often deal with harrowing calls.

The pilot project was supported by the University of Exeter’s Inclusivity Project, which aims to support small and medium-sized Cornish businesses to improve health and wellbeing at work. The project helped to create a simple and easy to use traffic light system to measure how firefighters were feeling.

Dr Daniel Derbyshire, of the University of Exeter, who worked on the project, said: “It’s fantastic to apply our research expertise to this innovative idea that could go some way towards helping firefighters reduce their stress levels, and I’m sure it is something we’ll be hearing more about in the future. It is always a pleasure working with the local Cornish business community to support improved health and wellbeing at work.”

Wiggan’s creation won Best Innovation in Everyday Life at the 2021 Sound of the Year awards. Similar benches have also now been installed at The Fire Fighters Charity’s three centres across the UK.

Wiggan now plans to create a virtual version of the bench, that can be accessed in any environment.