For Tigers catcher Tucker Barnhart, breathing techniques are key to being calm

Posted by: admin Categories: SPORTS & ATHLETICS
Comments Off on For Tigers catcher Tucker Barnhart, breathing techniques are key to being calm

There’s a song Tigers catcher Tucker Barnhart used to walk up to, one that is still central to the philosophy behind everything he does.

This song is not the typical jock jam. It is not meant to get his blood pressure rising or to get the adrenaline flowing. Rather, Barnhart was drawn to “Universal Sound” by singer-songwriter Tyler Childers for all the opposite reasons. It is a calming melody, an ode to the quiet beauty of life’s most basic function. A reminder to breathe.

My mind’s a mile a minute, and my thoughts, they bark like hounds
I focus on my breathing and the universal sound

“Makes you remember,” Barnhart said at his locker last week, “and keeps you thinking about it.”

Baseball is a sport where stillness drives the action. Long periods of silence and waiting, followed by a fast-twitch explosion. The average amount of action in a baseball game is believed to be around 18 minutes. That creates a challenge for the athletes who play this sport at the highest level. They must maintain a sense of calm while still being ready to pounce into action. And therein lies the genesis of one of Barnhart’s most important training techniques. Breathing, and the control of breathing, is central to everything Barnhart does.

“It’s actually really cool when you look at it and read about it and listen to it,” Barnhart said. “I thought, ‘Dang, that makes a lot of sense.’”

The idea started a few years ago when Barnhart was training in the offseason with Indiana-based hitting instructor Benny Craig.

While going over Barnhart’s swing and the fundamentals of his game, Craig asked a simple question: Do you breathe?

Barnhart had to think about it. And he realized he had no idea whether he actively breathes in the midst of a swing.

“To be honest, I’ve never thought about it,” he said.

Said Craig: “OK, the first thing we’re going to work on is your breathing.”

That led to watching videos of another sweet science. Many boxers view breathing as an integral technique, a way to control force, retain energy, absorb impact and maintain focus even when adrenaline is pumping. The boxing resonated quickly with Barnhart, who is a fan of mixed martial arts.

“When I’m done playing, I most likely will get involved in some way, shape or form,” Barnhart said.

With his compact build, the tattoos and the general look, it isn’t difficult to imagine Barnhart stepping into an octagon. 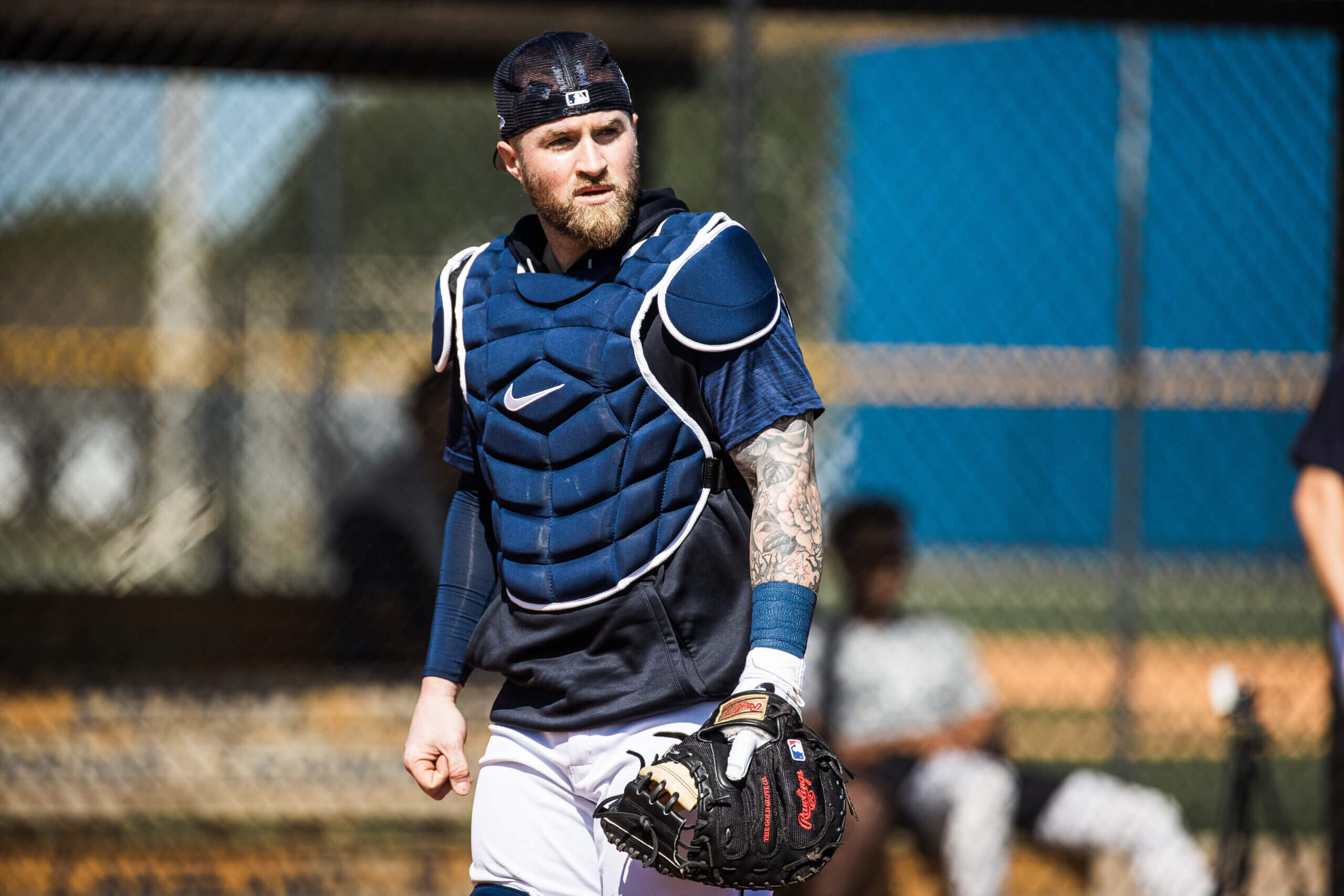 Barnhart watched videos featuring doctors and sports psychologists. He began practicing breathing techniques on his own. And the more he thought about it, the more Barnhart realized MMA and breathing could apply directly to baseball. Maybe more to catching than any other position. Being a catcher means mastering an odd mix of intellectual focus and grueling labor. It is the position that is the most taxing on the knees and the mind.

“I think more than anything, (breathing) helps slow your mind,” Barnhart said. “I speak for myself only in this case, but when my mind speeds up, everything else kind of breaks down. In being able to slow my breathing down, it slows my mind down and helps me think more clearly.”

Hitting, too, is a challenging act, and no batting practice session can truly replicate the tense thrill of an at-bat in the major leagues. That’s why Barnhart found further inspiration in a video by the Warstic bat company, co-founded by former Tigers infielder Ian Kinsler.

Warstic puts out promotional materials that talk about baseball like a battle. It is one of the most overwrought cliches in sports, but the analogy can also tell you something about how high-level athletes think about their professions. In this video, Kinsler and a few other MLB players spent time on a ranch with former Navy SEAL Stephen Holley. At one point, Holley asks if the players ever take batting practice or pitch with an elevated heart rate as a means of simulating the adrenaline of game action.

“You know what, that’s a hell of an idea,” Kinsler says in the video.

Holley takes the players through a military-style training exercise, where the men race up a hill, do pushups and overhead lifts before firing a rifle at a long-range target. There’s no way to simulate the chaos of a firefight. Training with an elevated heart rate is as close as you can get. And in order to perform while your heart is racing and all hell is breaking loose around you, controlling your breathing, slowing your heart rate and allowing your mind to focus are key.

“They train in a certain way to elevate their heart rate to a level that mirrors the pure panic,” Barnhart said. “What he was saying — they were training so that when that firefight happens, you’ve been in that situation and you know how to slow your heart rate down.”

Barnhart has found all this helpful as it applies to baseball. Perhaps it explains the sense of calm he brings behind the plate. The two-time Gold Glove winner got off to a slow start this season with the Tigers but has quickly started showing why he’s regarded as a trusted veteran. Many of his most impactful actions on the field are invisible to the untrained eye.

“He’s unnoticeable,” manager A.J. Hinch said earlier this season, “which is a compliment.”

Barnhart is best known for his pitch blocking. He uses a combination of MMA-like athleticism and a quiet mind to slide himself over, drop into position and absorb the impact of the baseball. In two of the Tigers’ recent victories, Barnhart has made ninth-inning blocks on pitches in the dirt that could have scored a run. Barnhart has graded out slightly above average in the Blocking Runs metric in every full season of his career.

“The balls in the dirt, I don’t know what the metrics are that support it, but it’s elite,” Hinch said. “When you watch games, it’s incredible to see him control runners by controlling the ball in the dirt. … I think his timing is really good. I think his body control is really good. … His technique is nothing real different than anything we’ve ever been taught as catchers. He just has an ability to center the baseball off of his chest and off of his stomach and kill it in front of him with no runners advancing.”

At the plate, Barnhart is hitting .272, not yet tapping into power but still serving as one of the most productive members of an otherwise struggling offense.

The more we see Barnhart in Detroit, the more we’re learning about his game. Like breathing, sometimes we take the little things for granted. Like breathing, the most simple of functions often have the biggest of impacts.