Rehabilitation Towards Functional Independence in a Patient With Intertrochanteric Fracture and Paraplegia: A Case Report

Posted by: admin Categories: PHYSICAL REHABILITATION
Comments Off on Rehabilitation Towards Functional Independence in a Patient With Intertrochanteric Fracture and Paraplegia: A Case Report

Traumatic spinal cord injury (SCI) causes significant neurological deficits that adversely affect the quality of life of patients and caregivers. Patients with SCI present with the symptoms of weakness and loss of sensations in the limbs. Motor deficits may occur in the form of paraplegia, hemiplegia, or quadriplegia. Patients remain immobilized for a prolonged period which may lead to complications like muscle wasting, atrophy, joint stiffness, contractures, bed sores, and osteoporosis. Patients are prone to fractures owing to osteoporosis. The fractures may occur even due to trivial trauma. Our case report presents the case of 45 years old male patient who is already diagnosed with paraplegia having a history of SCI 1.5 years ago. He has recent history of intertrochanteric (IT) fracture that occurs during the transfer from bed to wheelchair. Admitted to the hospital with a complaint of a popping sound along with low back pain. Further investigation and management were started.

Spinal cord injury (SCI) is defined as damage to the spinal cord that temporarily or permanently causes changes in its function [1]. Patients with spinal cord injuries suffer tremendous socio-economic difficulties in life [2]. The primary cause of SCI is road traffic accidents which is about 38% and other cause includes fall or trauma injury about 30%, 9% by sports-related injuries, 13% by violence, and 5% by surgical and medical cause. [3]. SCI is of two types traumatic and non-traumatic. Clinical syndromes of SCI are Brown Sequard syndrome, central cord syndrome, posterior cord syndrome, anterior cord syndrome, and cauda equina syndrome. A period of areflexia called spinal shock appears for approximately 24 hours after the injury. The reflexes gradually return in the next three days and finally, hyperreflexia occurs after six months of injury. The loss or impairment of sensory and motor function in the lumbar, thoracic, or sacral portions of the spinal cord (except cervical) occurs due to damage to neurological components in the spinal canal. Autonomic dysreflexia is one of the red flags in SCI patients [4].

Spinal cord injuries accompany many medical complications at every stage. Due to sensory loss, complications such as deep vein thrombosis, ureteric colic, pyelonephritis, and reduction in bone density may be present without showing typical signs and symptoms and are thus mostly overlooked [5]. The reduction in bone density makes them susceptible to fractures even due to low-impact injuries. The fractures may occur spontaneously or during the transfer from bed to a wheelchair and vice-versa [6]. Patients with paraplegia are more prone to lower extremity fractures than those with quadriplegia since paraplegic patients are functionally more active. The majority of fractures occur during seemingly mild activity such as transfer and positioning, and rest is the outcome of a violent accident [7].

Intertrochanteric (IT) fracture is an extracapsular fracture that develops at the level of the greater and lesser trochanters. This fracture has multiple classifications; orthopedic trauma association classification is most preferred among others. This problem commonly occurs in the older population as a result of trivial falls. In the younger population, a violent blow to the hip causes an IT fracture. The patient comes with the complaint of pain in the groin region and inability to move the leg followed by a history of fall or accidents [8]. The management of IT fractures involves internal fixation with a percutaneous compression plate, dynamic hip screw (DHS), sliding plate, compression hip screw, proximal femoral nailing, and a less invasive stabilization system. DHS is the most common method to treat IT fracture as it is a more suitable and safe method. But nowadays proximal femoral nailing is most commonly used than DHS because it has fewer complications and more merits such as less blood loss, reduced duration of surgery, early weight bearing and mobilization, reduce hospital stay and reduce risk of infection. The goal of treatment is to return the patient back to his pre-fracture state by preventing complications and making the patient functionally independent. Early physiotherapy management reduces the risk of prolonged bed rest and increases the chances of early mobility and independent functional activity [9].

A 45-year-old male farmer known case of paraplegia for 1.5 years was brought to the hospital with complaints of a popping or cracking sound from the hip and sudden low back pain while transferring the patient from the bed to the wheelchair. The patient went to the hospital for further investigation and management. The X-ray revealed the right side intertrochanteric fracture of the femur. Then, the fracture was managed surgically for the same. The patient also gave a history of SCI after the fall from the tree one year back. He sustained wedge compression thoracic vertebrae (D7) fracture following the fall. He was taken to the nearby hospital immediately where the vertebrae were fixed with an implant. The patient was bedridden for one year. The motor and sensory functions were not present in both the lower extremities. He also had bladder and bowel dysfunctions for one year. He developed bed sores over his buttocks before six months.

We performed a physical examination on postoperative day 3. On observation, the patient was in a supine lying position with his back appropriately supported. On examining the chest, there was a reduction in chest mobility. There was the presence of swelling over the right hip. There was an impairment in the motor function below the D7 level. There was a reduction in the range of motion in both lower limbs as shown in (Table 2). On neurological examination, muscle strength was grade 0 on manual muscle testing, deep tendon reflexes were absent in both the lower limbs and the muscles in both the lower limbs were flaccid. The strength in the upper limb was 4/5. On further examination, we performed limb length measurement and found a shortening of the right lower limb as shown in (Table 1).

The pre-operative X-ray of the anteroposterior view of the right hip revealed an intertrochanteric fracture as shown in (Figure 1). (Figure 2) displays a postoperative x-ray showing an intertrochanteric fracture fixed with simple external fixation. (Figure 3) displays a one-year-old X-ray of the spine showing a D7 wedge compression fracture. (A) Posteroanterior view of X-ray (B) Lateral view of X-ray. 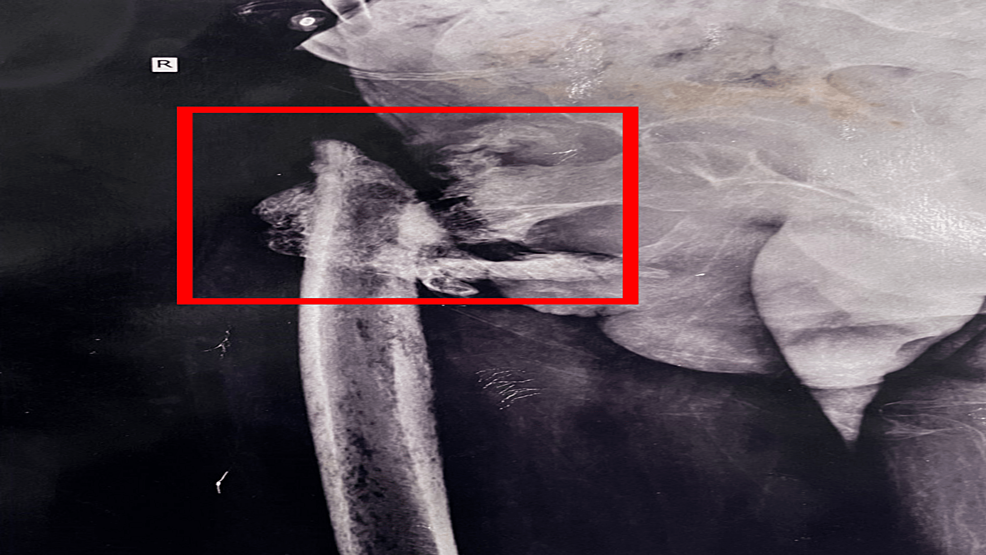 Figure
1:
Displays pre-operative X-ray of the anteroposterior view of the right hip 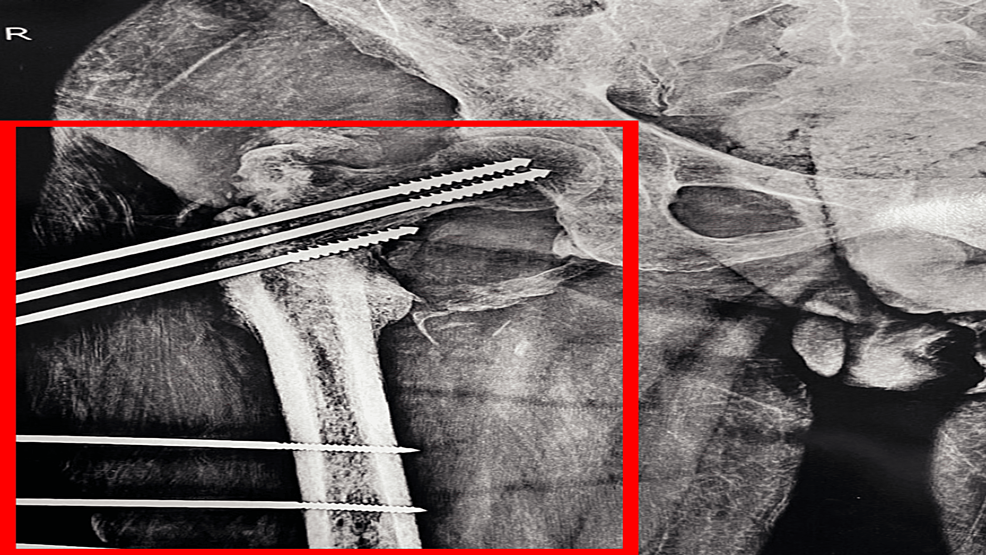 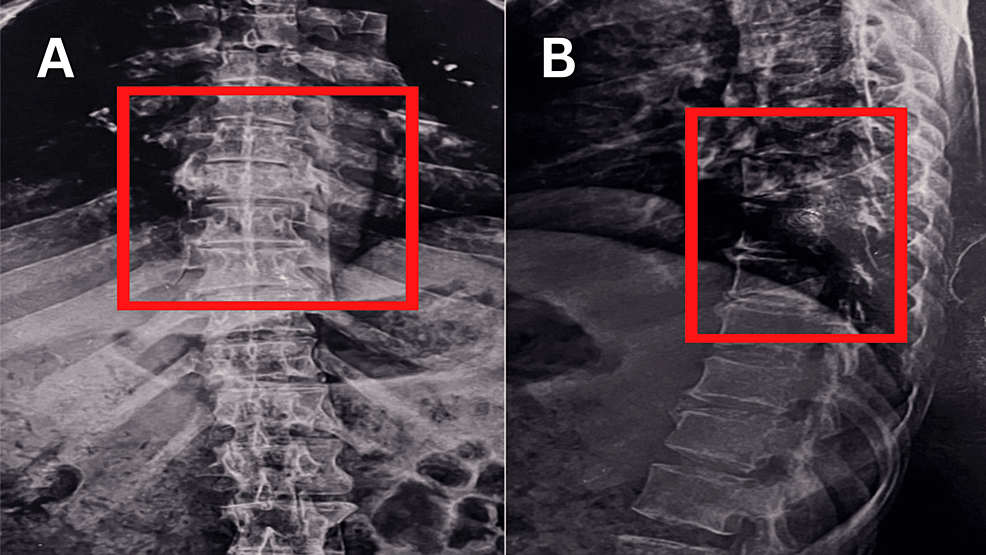 Table
3: Shows structured physiotherapy protocol for the given case

Week-wise protocol for the right side fractured lower limb is shown in (Table 4).

We used ASIA Scale for this case as an outcome measure showing the patient's impairment score with spinal cord injury as shown in (Table 5).

We took follow-up of the patient after 10 weeks of rehabilitation which shows improvement as shown in (Table 6).

Fragile IT fracture in a patient with SCI occurs due to a reduction in bone mineral density. This fracture occurs during the transfers and positioning. The management of this patient aims to prevent the complications like bed sores, joint stiffness, muscle wasting and atrophy, contractures, and pulmonary complications [10]. Our study presented the case of a paraplegic patient who sustained an IT fracture while transferring from a bed to a wheelchair. The fracture was managed surgically by an external fixator. We started physiotherapy management from postoperative day three and applied preventive measures to reduce associated complications. For the management of paraplegia, rehabilitation aims to maintain or improve residual strength or prevent the decline in the muscle strength of the upper extremities in the acute phase. A daily strengthening training exercise for the upper extremities helps in upcoming rehabilitation [11].

Shroff et al [12] concluded that physiotherapy assists people with SCI in functioning with their injuries daily. It entails mobilization exercises as well as muscle and nerve stimulation below the level of the injury. Furthermore, it may aid in the restoration of disused muscle function. Kumar P et al [13] concluded in their study that Osteoporosis and paraplegia are frequently linked, and fractures can result from seemingly benign events such as forceful passive ROM of the joints. The surgeon, physiotherapists, and patients' companions should understand this consequence and refrain from using force. Force during the passive range of exercise should be firm, slow, and below the limit that will prevent fractures in spinal cord injury patients during rehabilitation. Early mobilization, embedded patient rehabilitation and home-based rehabilitation help the patient to strengthen the muscles, reduce pain, and bring back to their ADLs or make a faster recovery and application of some preventive measures to reduce complications which facilitates the patient recovery and make fit for doing their ADL’s [14].

Patients with paraplegia are susceptible to sustaining IT fractures during transfers from bed to wheelchair and vice-versa. In this case report, we have shown a major role of physiotherapy in the postoperative management of fragile fractures in paraplegic patients to prevent complications and improve available muscle strength. The primary goal is to manage the fracture once it heals and then start rehabilitation for paraplegia which includes muscle tone facilitation and strengthening. This has played a significant role in patient independence. Outcomes from this case report can be helpful in further clinical practices.