The most known of all primary cardiac tumors is myxoma, which is most usually detected in the left atrium. As there are no physical signs or symptoms, a diagnosis is rarely made purely based on clinical evidence. Our study aims to investigate the case of post-operative left atrial myxoma with cerebellar signs. A 50-year-old woman complained of dizziness and syncope, which caused her to collapse on the floor early in the morning. Myxoma in the left atrium and mitral valve regurgitation was discovered after prompt medical assistance. She was recommended for surgery to excise the left atrial myxoma and mitral valve repair. Post the surgery, she developed breathing difficulties and cerebellar signs for which she was referred for physiotherapy. She underwent two weeks of tailor-made inpatient rehabilitation. This case study intends to emphasize the importance of early diagnosis, treatment, and, most importantly, rehabilitation to return the patient to her functional state. A structured exercise regimen assists the patient while also reducing post-surgery problems. Timely monitoring and treatment are projected to improve outcomes in patients treated with a multidisciplinary approach.

Cardiac tumors are uncommon entities in medicine. They are far more common in women and occur between the third and sixth decades of life. Cardiac myxoma is the most frequent of all primary cardiac tumors. Myxomas are most typically found in the left atrium, where they develop from a stalk linked to the atrial septum. Approximately 75% of myxomas are found in the left atrium, 20% in the right atrium, and 8% in the ventricles [1]. Patients have at least one of the standard triad symptoms: 1) obstructive cardiac concerns; 2) embolic symptoms, and 3) constitutional or systemic health conditions. It shows that this benign tumor can induce a variety of clinical symptoms, including cardiovascular disease and infective, immunologic, and neurologic disorders. Because there are no identifiable physical indications or symptoms, diagnosis is rarely made solely on clinical grounds. Myxoma is usually sporadic, though there have been reports of familial or repeated occurrences [2]. Echocardiography is a powerful tool for determining the position, attachment, form, size, and mobility of an intracardiac mass, as well as the existence and extent of any resulting hemodynamic disturbance [3].

Unusual appearances of cardiac myxomas provide diagnostic and differential diagnosis issues for physicians and can result in a delayed or missed diagnosis, inappropriate monitoring, delayed treatment, and possibly a bad prognosis. Greater knowledge of the atypical nature of cardiac myxomas will aid correct care and enhance prognosis. Because of the potential for malignancy, all patients without contraindications should have their tumours surgically resected as soon as possible after a diagnosis is made. The brain, lungs, bones, and soft tissues have all shown distant cardiac myxoma metastases before the diagnosis or several years after the surgical excision of the initial cardiac myxoma [4,5]. As in our instance, an uncommon appearance of cerebellum involvement can readily mask myxoma as the etiology of stroke as a differential diagnosis. For early diagnosis and prevention of problems, a high level of suspicion is required [6].

A 50-year-old woman who worked as a farmer presented to the emergency room with the chief complaints of abrupt dizziness and syncope, which caused her to collapse to the ground in the early morning. She was immediately taken to the local hospital where emergency treatment was given after which various lab investigations were done. Echocardiography revealed myxoma in the left atrium and mitral valve regurgitation. She has advised emergency surgery for excision of left atrial myxoma and mitral valve repair. She was then referred to our hospital and admitted to the cardiovascular and thoracic surgery (CVTS) ICU for surgery. On postoperative day one, she was referred for physiotherapy. On postoperative day three, she had the following complaints: pain at the incision site, difficulty in breathing, difficulty maintaining balance, and difficulty performing the basic activity of daily living (washing, toileting, eating).

On examination, the patient was medically stable, cooperative, oriented to person, place, time, and situation, and willing to participate in inpatient rehabilitation. She was medically alert, hemodynamically healthy, and competent upon review. With a blood pressure of 118/70 mm Hg, her vitals were stable. Pulmonary, cardiovascular, gastrointestinal, and thyroid tests were otherwise unremarkable. A neurological analysis showed jerky nystagmus to the left with a rapid motion. On both the upper and lower limbs, hypotonia (grade 1+, according to the tone rating scale) was present bilaterally. Sensory examination revealed impairment of proprioception, kinaesthesia, vibration, and two-point discrimination on both sides. All the non-equilibrium tests were grade two (moderate impairment: able to accomplish the activity, movements are slow, awkward, and unsteady) bilaterally. Balance test in sitting was graded fair, while in standing were poor. Romberg’s test was poor and tandem walking was absent. Planter reflex was mute bilaterally. Functional range of motion was present on both sides with medical research council grade three. On her left hand, past pointing was pronounced with heel shin testing affected on both sides. On gait assessment, the patient was able to walk on postoperative day 10, that too with minimal assistance from the caregiver. The gait deviations found were hip abduction (inability to shorten leg for limb clearance), limited knee flexion, trunk deviation towards the left, and decreased arm swing. She showed a wide-based gait and dysdiadochokinesia, as well as normal speech, all of which pointed to cerebellar involvement.

The complete sequence of events from the day of admission is shown in Table 1.

On echocardiography, there was a short PR interval along with a complete right bundle branch block. Preoperative echocardiography (Figure 1) revealed a dilated left atrium, a large left atrial mass measuring 3.99 X 2.52 cm attached in the mid part of the interatrial septum, encroaching left ventricle during systole, and causing prolapse of the anterior mitral leaflet with mild left ventricle inflow obstruction. 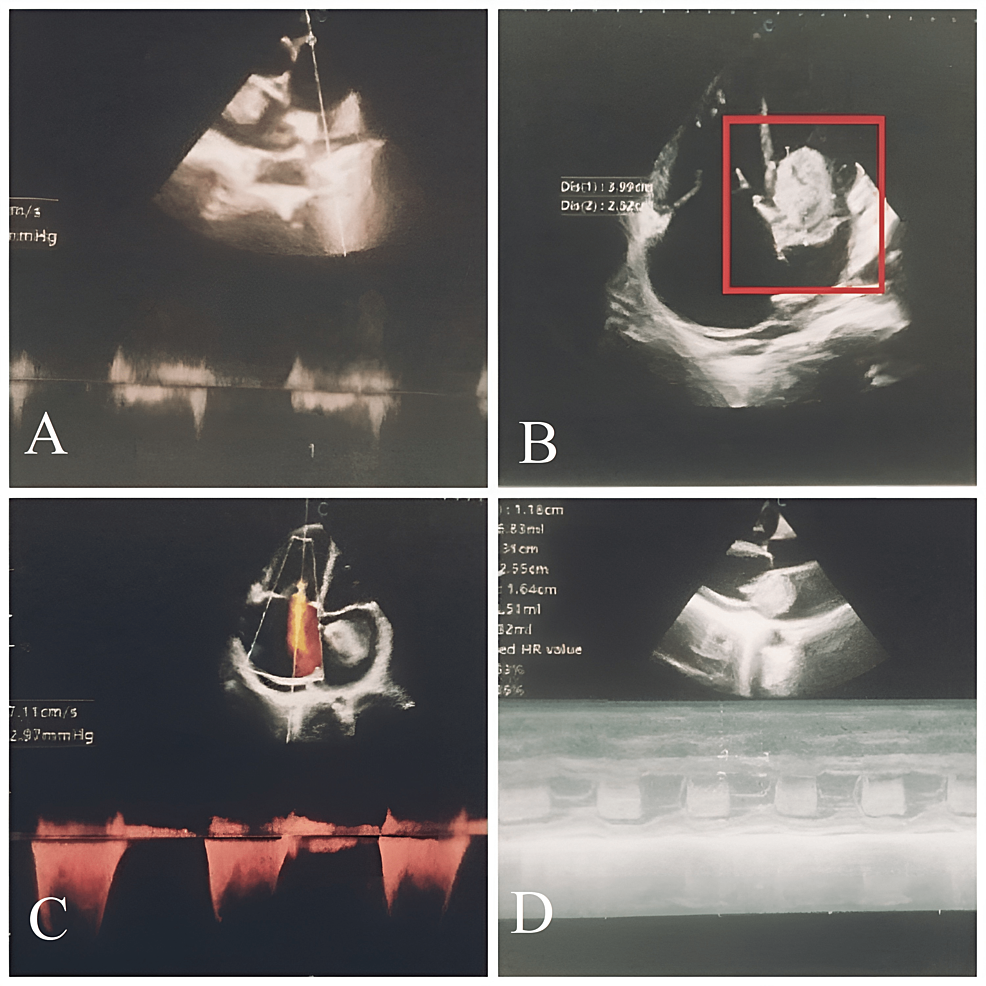 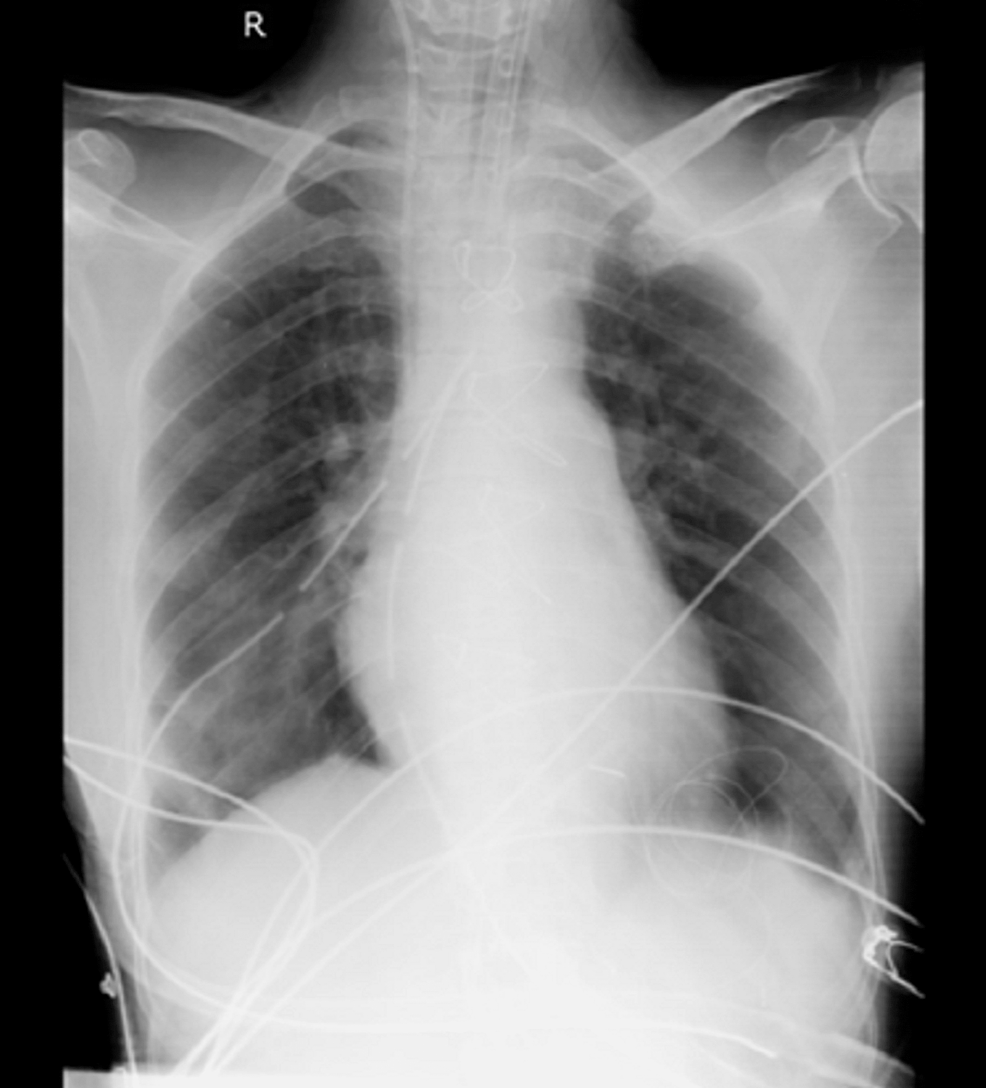 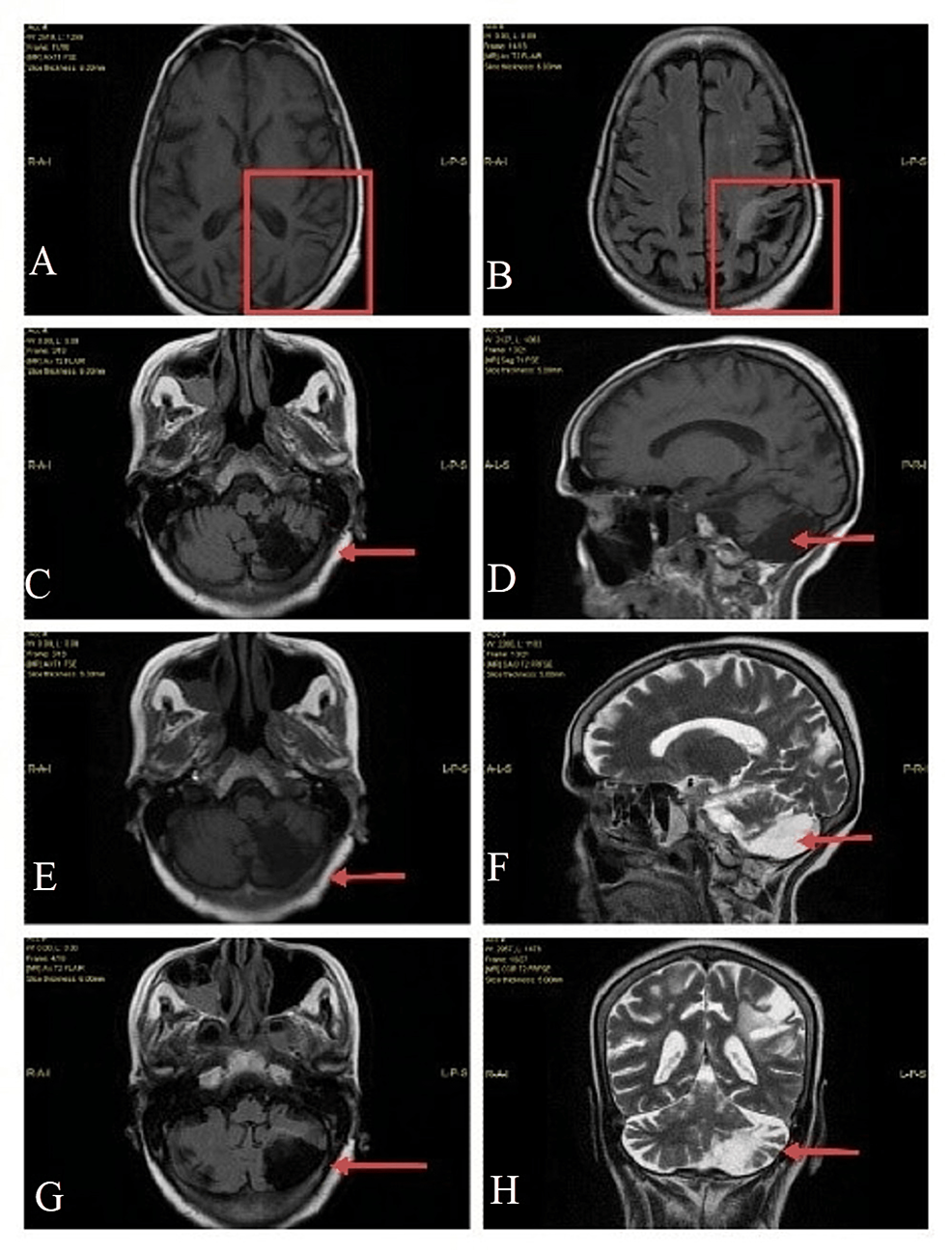 The therapeutic intervention focused on early rehabilitation of the patient enabling her to perform activities of daily living. The patient was visited by physiotherapists twice daily for two weeks. Each rehabilitation session was for about 30-45 minutes with a proper rest period in between the exercises. The therapeutic interventions provided to the patient are depicted in Table 2 and Figure 4. 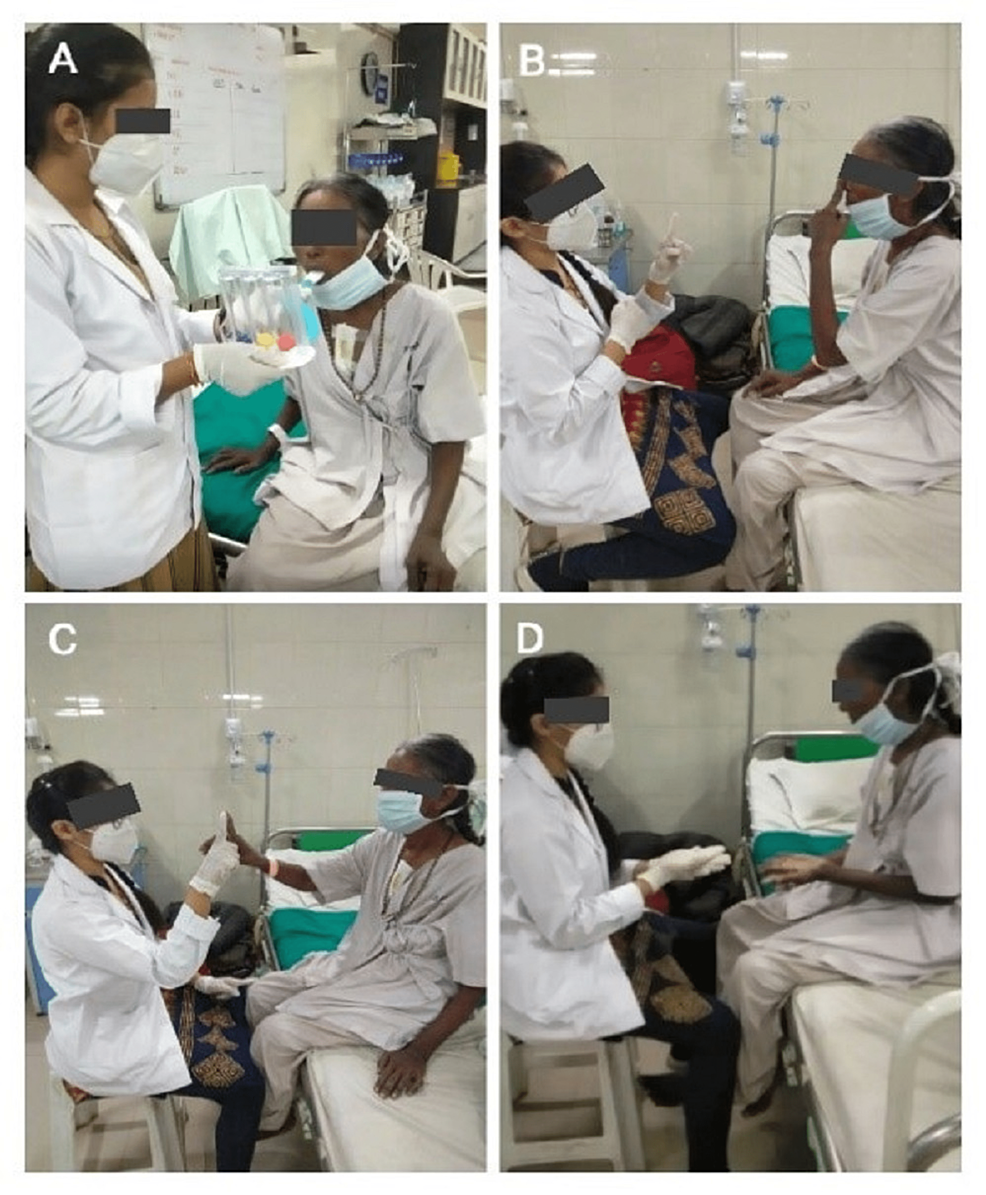 Follow-up and outcome of interventions

Table
3: Follow-up and outcome of interventions

This case report was on a 50-year-old woman who underwent surgery to remove a left atrial myxoma and repair her mitral valve. Following surgery, she underwent two weeks of an in-hospital cardiac rehabilitation program that was specifically designed for her. At the two-week follow-up after discharge, she showed improvements in her gait and quality of life. From a rehabilitation point of view, this case is rare and unique; firstly, because of the myxoma of the size of 3.99 X 2.52 cm along with mitral valve prolapse, secondly, its postoperative presentation with cerebellar involvement, and lastly, the challenging multidisciplinary post-rehabilitation and positive outcomes.

In addition, the diverse and atypical clinical manifestations of a cardiac myxoma vary from case to case. The main cause of the poor prognosis is the delayed onset of the symptoms and delay in the diagnosis. A thorough understanding, early diagnosis, and treatment of cardiac myxoma are of utmost importance.

In designing the protocol, we used the previous shreds of evidence that state that the initiation of early cardiac rehabilitation improves one's quality of life while lowering medical expenses [7] and shows marked improvement in exercise performance, six-minute walk test, and quality of life after the cardiac surgery [8]. For the neurological complications in our patient, the rehabilitation program was designed in line with the study that suggests postural control, balance and coordination training, and gait training, with or without the use of orthotic devices and aids for ataxic gait following cerebellar lesions [9]. Similarly, a systematic review stated balance exercises, coordination training, aerobic exercises like cycling, gait training, range of motion, and strengthening exercises for the extremities or a combination of these exercises for such patients [10]. These exercises also facilitate motor performance and diminish ataxia symptoms, enabling patients to accomplish personally significant daily goals [11].

This case demonstrates the importance and utility of early inpatient rehabilitation following surgery. The multidisciplinary rehabilitation program designed for the patient will add to the existing literature on physical therapy among such patients. To get the patient back to her functional state, early diagnosis, treatment, and most importantly, rehabilitation played important roles. A regular exercise regimen helps the patient and reduces postoperative problems. In patients treated with a multidisciplinary approach, timely monitoring and treatment are expected to improve patient outcomes.