The Rise of Cuddly Comfort Objects for Anxious Adults

Posted by: admin Categories: ANXIETY MANAGEMENT
Comments Off on The Rise of Cuddly Comfort Objects for Anxious Adults

Kacie Willis, a 34-year-old audio producer in Atlanta, suffers from panic attacks with no known cause. She’s tried cognitive behavioral therapy (CBT), anti-anxiety medication, mindfulness meditation, and CBD oil. Although some of these have provided relief, one coping mechanism has consistently helped her manage her anxiety, particularly at night: Kasey Kangaroo, a stuffed animal she’s had since she was four years old.

Willis can’t quite pinpoint why her stuffed kangaroo helps her anxiety, but it does. “Even if I’m not holding it at night when I sleep, it’s close enough for me to know it’s there. Maybe that’s the reason it helps with my anxiety—just the comfort factor, the familiarity.”

Whether they’re dealing with anxiety, stress, grief, isolation, or memory loss, countless people find solace in stuffed animals, weighted blankets, and other soft comfort objects. Researchers and product developers have noticed, and in turn have been creating products specifically designed to help alleviate certain ailments. There’s now a fluffy robotic seal for people with dementia, a weighted teddy bear for grieving adults, and a cushion that mimics breathing to calm people down.

Because this is an emerging field, the science behind why certain objects soothe us is still being studied. But Dr. David Spiegel, associate chair of psychiatry and behavioral sciences at Stanford University, says it makes sense that people find comfort in these objects. “We know children love stuffed animals—they’re what we used to call a ‘transitional object’ between just being by yourself and being connected with another human,” he says. Objects like these likely play a similar role for adults. “It’s not surprising that humans can stimulate thoughts and feelings related to interpersonal contact with an inanimate stuffed object.”

One small study published in 2020 in the Journal of Integrative Medicine found that weighted blankets reduced anxiety in patients at a psychiatric facility who chose to use them, compared to patients who did not. The authors attribute that calming effect to deep-touch pressure stimulation, a feeling that weighted blankets provide that soothes the nervous system. Another study published in 2013 in the journal Psychological Science found that simply holding a teddy bear could reduce existential fear in people with low self-esteem.

Another research study published in March 2022 in the journal PLOS One provided additional insight into why these types of objects might offer comfort. Researcher and roboticist Alice Haynes, a former member of the soft robotics group at Bristol Robotics Laboratory in the UK, joined forces with Annie Lywood—a textile specialist who creates products for people with sensory needs—to test out a breathing cushion students could use to relieve anxiety before an exam.

Students in the test group held the object—a plush, baby-blue cushion the size of a throw pillow that automatically inflates and deflates, mimicking inhaling and exhaling—for eight minutes before their exam. One control group did a guided breathing meditation instead, while another control group didn’t do anything special. Haynes and her team found that clutching the stuffed breathing cushion reduced anxiety as much as doing the guided meditation. 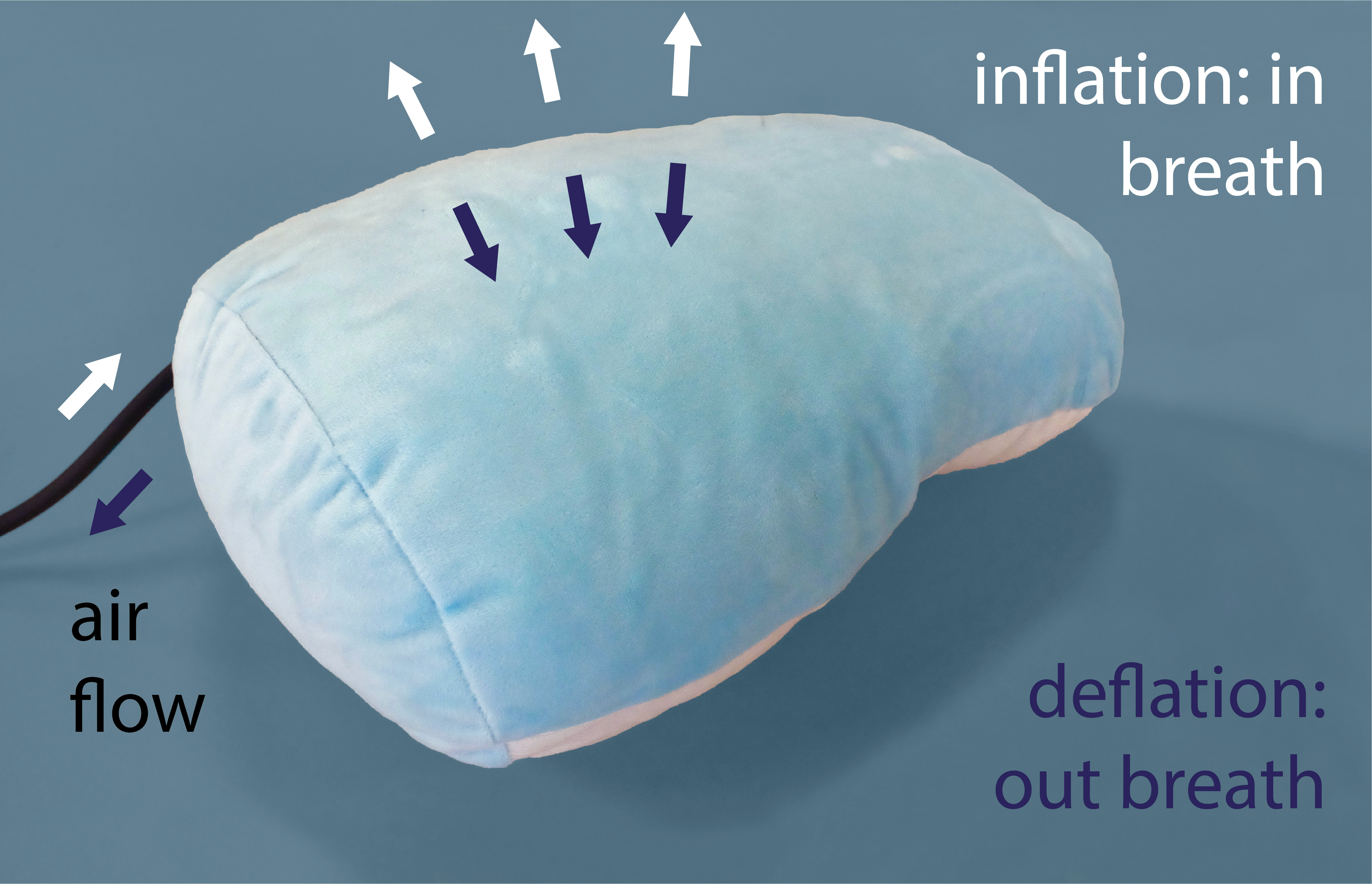 “This indicated that the cushion could be similarly effective as a breathing meditation for anxiety,” says Haynes, who is now completing her postdoctoral fellowship at Saarland University in Germany. “We didn’t give the students in the experiment any guidance about using the cushion. We didn’t tell them to follow it with their breathing or anything—it was just purely the act of holding it as it slowly breathed that eased their anxiety. I think we thought it would help with anxiety, but we were pleasantly surprised that it was as effective as the breathing meditation.”

Lywood—who is currently working on commercializing the breathing cushion through her company Sooothe—believes the findings highlight our innate need for touch, even if the source isn’t human or alive, for that matter. “We take touch for granted,” she says. But because many people have been deprived of it during the pandemic, she points out, “we are sort of rediscovering how valuable it is.”

Some comfort objects—like the breathing cushion and weighted blankets—were designed specifically to help with stress and anxiety, while others were created to address other mental-health and movement concerns. The PARO robotic seal, for example, was introduced in 2003 to reduce stress, isolation, and loneliness in elderly people with dementia. Now in its eighth iteration, the cute stuffed seal—which weighs six pounds and moves, makes noises, and responds to human interaction just like a real animal would—has been found to also improve things like motivation, socialization, and relaxation in this population.

A study published in the Journal of the American Medical Directors Association in 2017 looked at the use of the PARO seal in more than 400 patients with dementia at long-term care facilities in Queensland, Australia. People who interacted with PARO were more verbally and visually engaged and reported experiencing more pleasure than people with dementia who received their usual care. The robotic seal also helped reduce neutral affect—a lack of facial expressions that can be common among patients with dementia—and made them less agitated. Interestingly, the study also tested a similar-looking plush toy without robotic features and found that while PARO was very effective, the simple plush toy offered many of the same benefits.

Sometimes, state-of-the-art robotics aren’t necessary to make a person feel more at ease; an ordinary teddy bear will do. When Marcella Johnson lost her fourth baby, George, shortly after he was born in 1999, she found herself overcome with an aching sensation in her arms and chest. A week after George’s death, she visited his gravesite with her father, who brought her a terracotta pot filled with flowers. “The moment I got that cold, hard weighted pot in my arms, the aching in my heart and my arms immediately went away. It was the first time I felt comfort, and it was marked.”

Shortly after, Johnson read books about other women who had lost babies, and she noticed a startling and unexpected trend: Many of them sought out weighted objects to carry around with them. One woman carried a five-pound sack of flour, while another carried a pineapple that weighed as much as her baby. “When I read that, I thought, If it’s happening to me and it’s happening to all these other women, then something should be created.” She created the Comfort Cub, a four-pound weighted teddy bear designed for people across the country who are struggling with infant loss and other forms of trauma and grief. “When you put a weighted object in your arms, it can just relieve that pain,” Johnson says.

Researchers and inventors in this relatively young field are excited by the promise of cuddly weighted objects. Since the breathing cushion study, Haynes has begun researching wearable forms of sensory textiles, while Lywood has begun working on a calming musical cushion.

“Designing around this sensory need for people of all ages is so valuable,” Lywood says. “I feel like we’re at the beginning of this journey.”