The Apple Watch can accurately predict stress levels, according to a study conducted by researchers at the University of Waterloo, Canada (via MyHealthyApple). 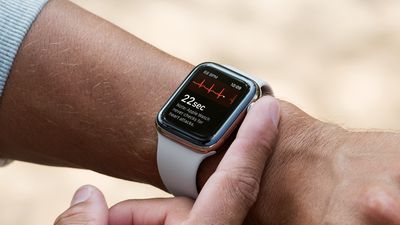 Using the Apple Watch Series 6's ECG sensor, the researchers found that there was a close association between ECG data, including heart acceleration and deceleration capacity, and participants' reported stress levels at the time the readings were taken. Machine learning algorithms were then developed using this information to create a prediction model.

The stress models are said to have a "high level of precision," but lower recall. The study concludes that the Apple Watch has "promising" potential for stress prediction, and proposes that since the device collects additional health information such as sleep and activity information, even more data points could be integrated into stress models to increase their predictive accuracy.

The researchers postulate that the Apple Watch could be used to aid mental health care, offering activities such as breathing exercises to offset stress signals, responding early to changes in mental health. Competing devices from Samsung, Fitbit, and Garmin have offered a stress score feature for some time, but Apple has yet to implement such a feature in its Health app.

At WWDC 2022 in June, Apple previewed the next generation of CarPlay, promising deeper integration with vehicle functions like A/C and FM radio, support for multiple displays across the dashboard, personalization options, and more. Apple says the first vehicles with support for the next-generation CarPlay experience will be announced in late 2023, with committed automakers including Acura,...

Apple's main chip supplier TSMC will kick off mass production of 3nm chips this week, with Apple being the primary customer of the new process, which could first be used in upcoming M2 Pro chips expected to power updated MacBook Pro and Mac mini models. According to the new report by DigiTimes, TSMC will start mass production of its next-generation 3nm chip process on Thursday, December 29, ...

Apple is working on a new version of the iPad mini, with mass shipments expected to start towards the end of 2023 or in the first half of 2024, according to the latest information shared by TF International Securities analyst Ming-Chi Kuo. In a series of tweets today, Kuo said a new processor/chip will be the main selling point of the new iPad mini, suggesting that the device will receive...

Anker is heading into the new year with even more sales on its best charging and power accessories, all of which can be found on Amazon. Below you'll find deals on USB-C cables, wall chargers, portable batteries, MagSafe-compatible wireless chargers, and more. Note: MacRumors is an affiliate partner with some of these vendors. When you click a link and make a purchase, we may receive a small...

These 12 U.S. States Will Let You Add Your Driver’s License to Your iPhone

Apple continues to roll out a feature that allows residents of participating U.S. states to add their driver's license or state ID to the Wallet app on the iPhone and Apple Watch, providing a convenient and contactless way to display proof of identity or age. The feature has only launched in Arizona, Colorado, and Maryland so far, but Apple shared a list of additional U.S. states committed...

Tags: breathing breathing exercise STRESS
« What are symptoms of the new variant of Covid-19?
You won’t overdose by touching, breathing in fentanyl »