Posted by: admin Categories: SPORTS & ATHLETICS
Comments Off on Why Heart Rate Variability Matters for Sleep 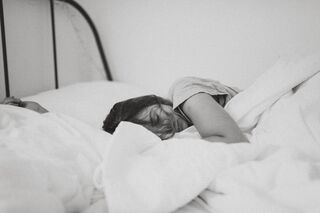 You might be familiar with HRV—heart rate variability—as a popular training tool for workouts and a biomarker for measuring exercise recovery. Beyond exercise tracking, heart rate variability has a lot to tell us about the underlying health of our nervous system and our risk for disease. And there’s an important two-way relationship between HRV and sleep that’s often overlooked.

What is HRV, and why is it important?

Why does our heart rate shift in this way, from beat to beat? Heart rate variability is the result of the constant interplay of two parts of our nervous system, one that functions to stimulate our bodies to action and the other that works to reverse that stimulation and restore our bodies to a state of relaxation and calm.

The sympathetic nervous system revs the body to action in response to stimuli in our external environment. It elevates heart rate and amplifies airflow through the lungs. It increases the production of stimulating hormones such as adrenaline and cortisol. It elevates glucose in the bloodstream and raises heart rate and blood pressure, increasing the supply of oxygenated blood throughout the body and to the brain. When the sympathetic nervous system is in high gear, it increases energy, sharpens alertness, focus, and reaction times, and powers major muscle groups.

At its core, the sympathetic nervous system activates our flight-or-fight response.

It’s responsible for your pounding heart when a car swerves into your lane as you’re driving or when you have a big fight with your partner. It’s behind your rapid breathing when you’re about to speak to a crowd. It contributes to the buzzing, elated feeling when you’ve just gotten engaged or been hit with some unexpected and exciting news. (Our fight-or-flight system responds not only to stressful and threatening situations but also to positive stimuli from our environment.) The sympathetic nervous system also goes into high gear when we’re exercising and being physically active.

The sympathetic and parasympathetic systems are the two main components of our autonomic nervous system, which regulates essential involuntary physiological functions, including respiration, metabolism, digestion, elimination, fluid production (think: sweat, tears, saliva), and sexual response. The ANS—through the often-opposing forces of the sympathetic and parasympathetic systems—regulates heart rate and blood pressure, rate of breathing, and body temperature. Like the broader nervous system at large, the ANS is constantly working to respond appropriately to stimuli and to maintain balance, or homeostasis, in the body.

HRV is an excellent measure of how well our autonomic nervous system is functioning.

A high HRV—meaning a wider variation of time intervals between heartbeats—indicates the body is responsive to both the sympathetic and parasympathetic systems, able to gear up into fight-or-flight mode and slow down into rest and digest as needed.

A low HRV—shorter variation of time intervals between heartbeats—illustrates a lack of adaptivity between fight or flight and rest and digest and is an indication of an imbalance in the ANS. It is a likely indication that our fight-or-flight system is running in overdrive and over-dominant.

The resilience, flexibility, and balance of our autonomic nervous system are critical to our mental and physical health. Imbalance and dysfunction between the sympathetic and parasympathetic systems are associated with inflammation, chronic stress, and chronic disease, including cardiovascular disease and type 2 diabetes, as well as depression and other mental health conditions. Low HRV scores can indicate elevated risks for heart attack and stroke and are frequently present in people with depression and anxiety disorders.

Let’s take a closer look at the relationship between the nervous system, HRV, and sleep.

HRV and sleep: a two-way street

The autonomic nervous system and sleep have a complicated, bi-directional relationship. The activity of our ANS affects our ability to fall asleep and sleep through the night. How much and how well we sleep, in turn, affects the ability of our autonomic nervous system to function effectively, in everything from managing our stress response to regulating cardiovascular activity, blood sugar, and metabolism, as well as the hormones that affect mood and physiological function. Here are some key things to know about how the ANS works and how HRV changes during sleep:

Remember, we pass through the stages of non-REM sleep and REM sleep in every sleep cycle. And a typical 7-hour night of sleep contains between 4-5 sleep cycles. That gives you a sense of how complex and dynamic ANS activity is during sleep, with heart rate and heart rate variability continually shifting. It also demonstrates how important the flexibility and responsiveness of our nervous system is to a night of healthy sleep—and how restless and short sleep can throw our nervous system out of balance.

Tags: ANXIETY INSOMNIA panic attacks STRESS
« How to Breathe for Better Health (Plus 4 Breathing Techniques To Get You Started)
99% Of People Are Breathing Unhealthy Air »