Posted by: admin Categories: SPORTS & ATHLETICS
Comments Off on Training session of IFBB Academy Dubai ends on a high note 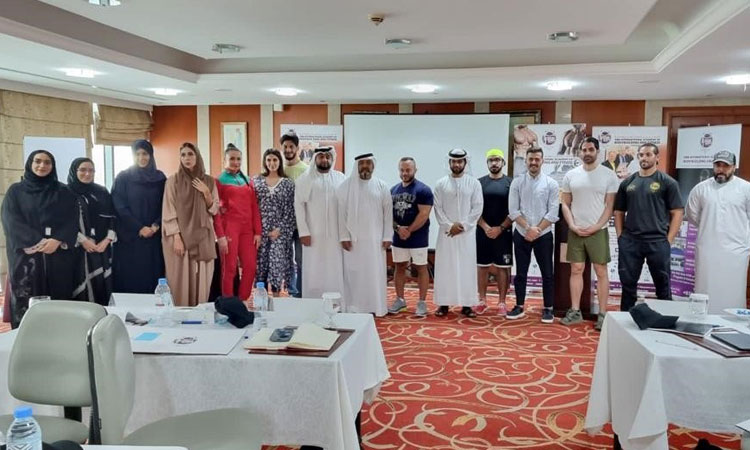 Participants pose for a picture with retired Colonel Abdul Karim Mohamed Saeed after the presentation ceremony.

The IFBB International Academy for Bodybuilding and Fitness in Dubai hosted a two-day advanced category training session at the City Season Hotel in Dubai.

The training programme of the level 4 course for bodybuilding and fitness trainers in the advanced category attracted participants from the UAE, Jordan, Syria, Oman, Egypt, Russia, Iran, Pakistan, and Yemen.

Later, he explained the principles of weight training to the participants. International lecturer and captain Sultan Alotbi apprised the attendees about breathing and muscle relaxation techniques.

The principles of weight training were also explained to the participants during the practical session.

The second day of the training session started with a lecture from Engineer Walid, who discussed Anthropology. 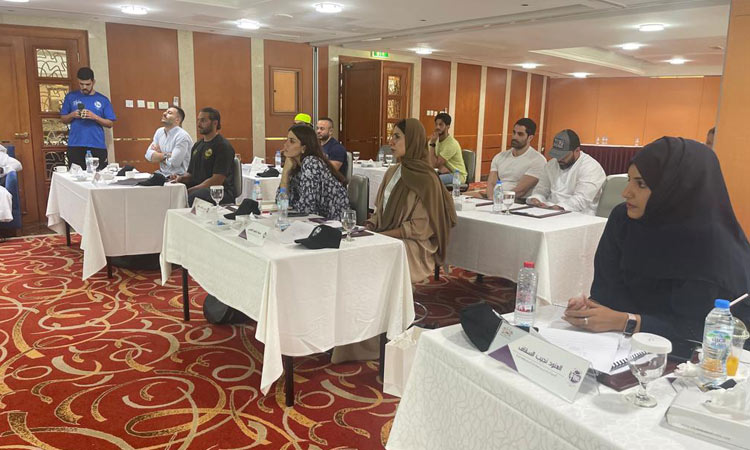 Participants during the training programme of the level 4 course for bodybuilding and fitness trainers.

Captain Alotbi talked about cardiovascular exercises. Retired Colonel Abdul Karim Mohamed Saeed, Chairman of the IFBB Academy in the UAE and the Middle East, gave the speech during the closing ceremony of the two-day event.

Retired Colonel Abdul Karim Mohamed Saeed honored the guests and gave away the certificates to the graduates of the previous course.

"I would like to thank Dr. Santonja for his inspiring vision and continuous support of the IFBB International Academy for Bodybuilding and Fitness in Dubai," he said.

Retired Colonel Abdul has been promoting the concept of bodybuilding in the UAE for more than five decades. A decorated officer opened Dubai's first gym in 1984, which was famously known as the World Gym, situated at Bur Dubai.

After retiring from the force, retired Colonel Abdul took the decision to open the academy in Dubai and GCC.

"The IFBB International Academy for Bodybuilding and Fitness in Dubai, started six years ago, has achieved exceptional success so far," said Engineer Walid.

"The credit for this success goes to the hard work, which is consistent with the approach and philosophy in line with the standards of the International Federation of Bodybuilding and Fitness.

"Very soon we will be opening the IFBB International Academy for Bodybuilding and Fitness in Palestine and Egypt," added Engineer Walid, who holds a master's degree and was the first Emirati referee to officiate the World Bodybuilding Championships held in Spain in 2018.

Shokri Balmani, an Iranian student pursuing a personal trainer's course, praised the high level of teaching at the IFBB International Academy for Bodybuilding and Fitness in Dubai.

"The information provided during the study at the academy and the in-depth knowledge we got during this two-day training session was perfect. The lecturers provided valuable information on the subjects covered at the session."

Gulchachak, a Russian national who landed in Dubai seven months ago, also attended the training session.

"We got the best possible knowledge on the topics discussed during the sessions, whether it was practical or the subjects related to bodybuilding and fitness," said Gulchachak, who dreams of making a career in powerlifting.