Pedia_Roid: Training With Humanoids To Save Lives

Posted by: admin Categories: SPORTS & ATHLETICS
Comments Off on Pedia_Roid: Training With Humanoids To Save Lives

Images: The World’s First Humanoid for ER Training. From seizure to bleeding, to emotions, resistance, changes in nail/face color, pupils, and breathing, the programmable bot can simulate any emergency on cue. (Credit: Tmsuk)

As premiered at CES 2022 in Las Vegas, Pedia_Roid is a patent-pending pediatric patient-type robot that can realistically simulate the jittery movements of a child who is reluctant to receive treatment, or a sudden change in medical condition, according to the maker Tmsuk.

“We pulled together our robotic expertise to create a humanoid that suddenly falls ill or presents drastic changes in symptoms, so medical trainees can experience tense moments and learn how to save lives under tremendous pressure,” Tmsuk CEO Yuji Kawakubo said. “New doctors, nurses, and EMTs often panic under pressure because they’ve only practiced on motionless dummies. Pedia_Roid not only develops symptoms but also throws a tantrum, forcing students to hold it down while trying to treat the child. It’s an ultimate emergency simulator.”

The company says that it was developed in response to the fact that there are few opportunities for clinical training for children in the field of medical education, and designed specifically for healthcare professionals training in pediatric emergency care.

According to the media release, “It can reproduce in detail the expression of emotions such as anxiety, fear and resistance, changes in facial color, pupils, and breathing sounds. In addition to dental treatment, the system can be used for training in various fields of pediatric medicine, including emergency care.”

The robot can also realistically simulate the jittery movements a reluctant child can make or when experiencing a sudden change in their medical condition like kicking and screaming. With 24 programmable drive shafts, users can customize simulations to mimic even complex movements such as a seizure, with the compressed air actuators keeping the robot from breaking while users train to hold the robot down as its arms and legs flag about swinging erratically.

To make it realistic the robot also features a beating heart, nails that change colors, cheeks that change colors, a flexible mouth and tongue, eyes that shut, pupils that can change looks, pulse detectable in multiple places, replenishable imitation blood, and replaceable individual teeth that can be drilled or shaved in dental work training, and multiple sensors. 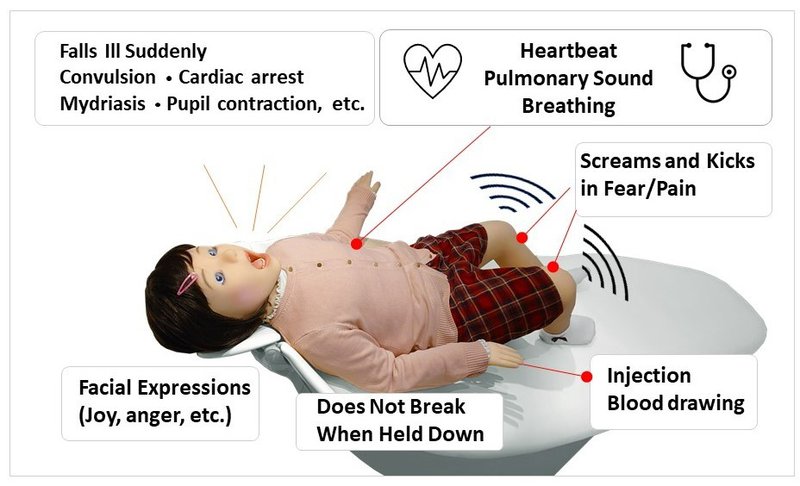