The newly established NICU music therapy program is only the third of its kind in Ontario and would benefit patients and parents alike.

According to the GRH Foundation, music therapy provides safe stimulation through modified live music such as soft humming, slow songs, or lullabies, which is said to support infant self-reliance and promote comfort, stability, sleep, relaxation, and bonding between caregiver and baby.

Tyler Reidy is a medical music therapist for children and is the one who performs the songs for the patients. He said many of the babies admitted to GRH’s NICU have respiratory distress or difficulty with things like food intake or weight gain. 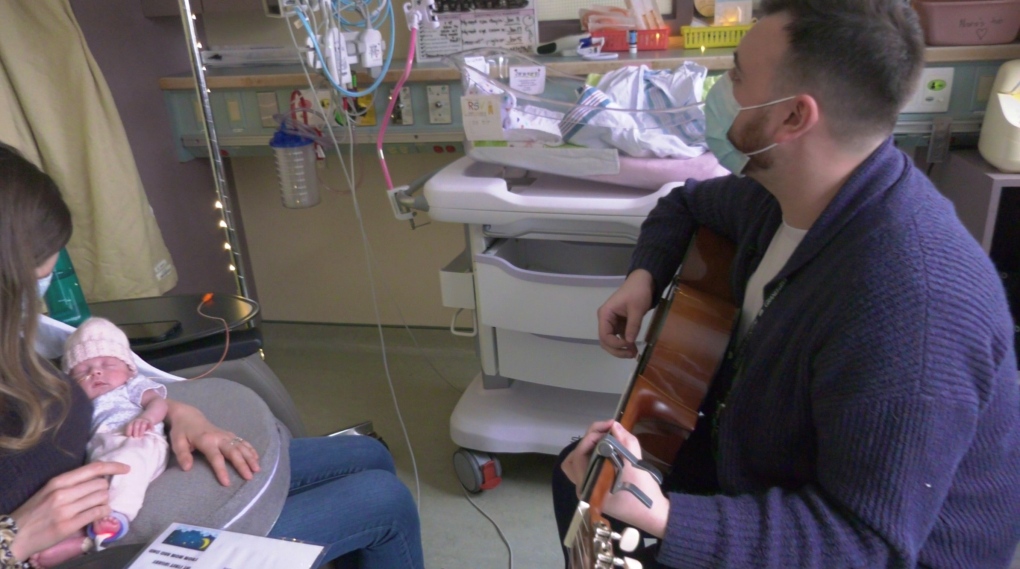 Music therapist Tyler Reidy sings for Rebecca McGinley and her baby Nora at Grand River Hospital in January 2023. (CTV News/Spencer Turcotte)“Sometimes I can support with what is called entrainment to help with feeding. So nutritive suckling, sometimes when we’re premature, we’re not able to suck rhythmically, so if the stimuli support that,” Reidy said.

Rebecca McGinley’s baby Nora was born two months early. McGinley admitted it’s an anxious time for the family as Nora is in the NICU.

“It’s also crazy to have a newborn that you can’t hold right away or interact with like a normal newborn,” McGinley said.

Make You Feel My Love by Adele is one of McGinley’s favorite picks for Nora.

“We just worked with it and music plays such a big part in our lives, so certain lyrics remind me of her,” said McGinley.

Harmonies for the heart are sometimes just what the doctor ordered.

“[It] can really have an impact on neurological development and also on the regulation of heart rate and breathing rate, temperature stability when they do skin to skin with a family member, for example during music therapy,” said Emily Fenske of the children’s program.

Creating meaningful musical experiences with some of the smallest patients seems to show that music may be the best medicine.