When a sick little girl gets kidnapped, and her father turns out to be a member of a corrupt New York Police Department ring called The Brotherhood, well that’s the makings of a Law & Order: Organized Crime/SVU crossover.

The case got underway during the Law & Order: SVU portion of NBC’s Thursday-night lineup (read a recap here), when Olivia got a call about a missing girl who had leukemia. What was worse, the girl’s leukemia treatments had exacerbated her asthma, meaning that if her breathing problems got triggered, there was a good chance she’d be unable to breathe.

The girl, Sara, was the daughter of Officer Jessie Santos, a Brotherhood member who was behind bars. When Stabler visited, Santos swore he didn’t know who might have it out for him, then wondered whether Frank could be involved. So Stabler hightailed it to the Donnelly home, where Frank said The Brotherhood didn’t have beef with any one who might be involved. And then, to twist the knife in Stabler’s conflicted heart, Frank and his wife announced that they’d given their infant son a special middle name: Elliot. On the way out, Stabler pretended to drop his keys and, while bent down, placed a tracker on Frank’s car. 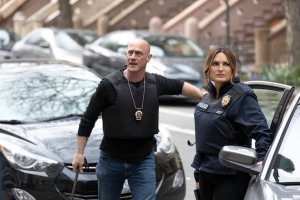 While Liv and Elliot were in the car, tracking Donnelly, Stabler told Benson about the baby-naming. She was shocked, saying that he was maybe getting too close to the older cop. Stabler said it wasn’t that simple. “The older I get I’m beginning to understand that people are complicated,” he said. “I think my father staged a shooting while he was on the job.” But they didn’t have a lot of time to discuss, because they tracked Donnelly to Jessie Santos’ home.

After Frank left, Jessie’s wife said that she’d gotten a video of her daughter with a gun to her head, and a demand for a boatload of cash in order to save her life. At the distraught woman’s request, Frank had brought over a duffel bag filled with bills.

Meanwhile, Velasco temporarily joined the Organized Crime team to hunt down the people who took Sara. They eventually found the kidnapper’s location, and Stabler and Benson were first on the scene. Without waiting for backup, Liv and El kicked down the door, located Sara and gave her her much-needed inhaler. Elliot brought the girl and her mom to see Jessie in jail, where he tearfully thanked Stabler… and, after a little manhandling, admitted that the man who took Sara was a cartel member that Donnelly had crossed. And what’s more: Santos was willing to wear a wire to get Donnelly to talk.

Later, Benson and Stabler chatted about how his search for the truth about his father was ongoing. And at the end of the hour, Stabler went back to the tree where he’d practiced shooting when he was a kid and dug out the bullets. And back at headquarters, Bell and Slootmaekers had some bad news: They had good reason to think that Donnelly was setting Stabler up to take a giant fall.

Now it’s your turn. What did you think of the episode, and of the crossover on the whole? Sound off in the comments!