As China is seeing a rise in Covid-19 cases and nations globally continue to ail under other illnesses, several countries are reporting a shortage of essential drugs and antibiotics.

While China continues to reel under record Covid infections, millions of Chinese are struggling to find treatment amid medicine shortage.

However, the problem doesn’t persist only in the Asian country. Europe and North America have seen shortages of the key antibiotic amoxicillin and other medications as surging illnesses particularly among children have increased demand for the drugs.

Hospitals in many countries have come under pressure from a rising number of illnesses including what has been dubbed a “tripledemic" of Covid-19, influenza and the respiratory syncytial virus (RSV) which causes bronchiolitis.

News18 takes a look at the status in some of the countries:

While ibuprofen and Paxlovid are in demand due to Covid surge, friends and relatives in Hong Kong and Taiwan are buying vast quantities of drugs from local sellers and shipping to the mainland. People queue to buy antigen test kits at a pharmacy amid the Covid-19 pandemic in Xian, in China’s northern Shaanxi province on December 20, 2022. (AFP)

China, which recently lifted Covid restrictions, is facing a huge demand for fever-reducing drugs as the price of ibuprofen has quadrupled and the antiviral drug Paxlovid has been sold out within hours.

According to a report in New York Times, China already had low stocks of fever medicines because the government had strictly controlled the sale of cold and flu medication under “zero Covid.” The tough policy had required buyers to register their names, a rule aimed at preventing residents from using over-the-counter drugs to reduce fevers and avoid detection.

Despite China being one of the world’s largest producers of pharmaceuticals, the country is rushing to address the shortfalls and making last-minute deals to bring more vaccines and foreign-made treatments.

Drug Shortages in US

There have been reports of severe shortages of antibiotics and other medicines in the United States in recent weeks due to multiple reasons.

This year, the US has witnessed an unusually fast start to the annual flu season and a spike in other respiratory illnesses creating a surge in demand for fever relievers and other products.

“There are more sick kids at this time of year than we have seen in the past couple years,” Dr. Shannon Dillon, a pediatrician at Riley Children’s Health in Indianapolis told the Associated Press.

Drugmaker Johnson & Johnson says it is not experiencing widespread shortages of Children’s Tylenol, but the product may be “less readily available” at some stores. The company said it is running its production lines around the clock. 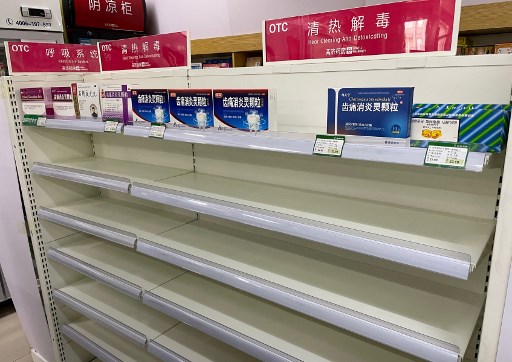 This photo shows an almost empty shelf of cold medicine at a pharmacy amid the Covid-19 pandemic in Beijing on December 15, 2022. (AFP)

Doctors and other experts say the problem could persist through the winter cold-and-flu season but should not last as long as other recent shortages of baby formula or prescription drugs.

Several countries in Europe including France, Germany and others are facing acute shortages of essential drugs amid supply tensions and a sudden rise of RSV.

In France, the medicines regulator ANSM said last month that there are “strong supply tensions" for the version of amoxicillin most used by children, warning the situation could last until March.

Germany, too, has sounded the alarm in recent weeks about shortages of a range of drugs including amoxicillin and other antibiotics.

German authorities say the country has a critical shortage of more than 50 drugs, most of them generics. The problem is caused by slim margins for some medications, a concentration of suppliers in certain non-EU countries, heightened demand and quality control issues.

Amoxicillin is a member of the penicillins antibiotic family and is used to treat a range of bacterial illnesses, including chest and ear infections, often in children.

Apart from Spain and Germany, other countries including US, Canada and Australia have reported shortage of the drug. A staff member prepares fever medicine at a pharmacy amid the Covid-19 pandemic in Nanjing, in China’s eastern Jiangsu province, on December 19, 2022, as the pharmacy offers six capsules for each client. (Photo by AFP)

Some countries have put amoxicillin on their list of drugs for which pharmacists are authorised to find substitute treatments.

What is causing the shortages?

Winter in the northern hemisphere has brought a particularly nasty influenza season as well as spikes in other viruses such as RSV. The surge comes after two years in which Covid measures such as quarantines, self-isolation and mask-wearing significantly decreased the rate of such illnesses.

Pharmaceutical companies who had cut back production because of the previously falling demand are now scrambling to meet skyrocketing orders, causing delays.

Read all the Latest Explainers here