Feature: Should healthcare professionals do more to warn their patients about the risks of air pollution?

Posted by: admin Categories: PULMONARY DISEASES
Comments Off on Feature: Should healthcare professionals do more to warn their patients about the risks of air pollution?

Healthcare providers have an important role to play in informing patients about the risks of air pollution, but they are only one part of the jigsaw, Tamara Krivskaya reports.

In February, the Mayor of London said the NHS should step up its efforts to inform patients about the risks of air pollution.

The announcement followed a verdict on the death of nine-year-old Ella Adoo-Kissi-Debrah, who passed away in 2013 following a fatal asthma attack and was the first person in the UK to have air pollution listed as a cause of death. She lived in Lewisham, South London, close to the busy North Circular Road. The judge concluded that not enough was done to protect her, that health professionals knew far too little about air pollution to help her, and that her family weren’t provided with the information they needed to do what they could to reduce her exposure to air pollution.

Dr Andy Whittamore, Clinical Lead at Asthma + Lung UK and a practising GP, says: ‘Long-term exposure to air pollution can cause some people to develop lung conditions including asthma. It has also been linked to an increased likelihood of developing heart conditions, suffering strokes, and developing dementia, as well as worsening mental health outcomes.

‘It is harmful for everyone, but some groups are more vulnerable, such as pregnant women, children, older people, those living with lung conditions and those on the lowest incomes who tend to live in urban areas where there are higher concentrations of air pollution.’ 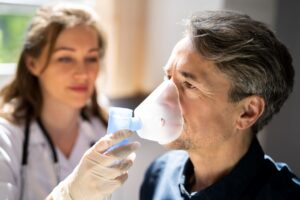 She says: ‘Exposure to air pollution is also likely to make us more susceptible to other diseases affecting our airways and/or the severity with which we experience these. A report led by Imperial College’s School of Public Health’s Environmental Research Group published in September 2021 found that long-term exposure to elevated levels of air pollution increases the risk of hospitalisation from Covid-19. More research into this area is needed but what we know so far all points towards the need to improve air quality to increase our resilience to respiratory disease.’

Tanja continues: ‘Air pollution is now considered the largest environmental risk to public health in the UK. Its impact includes well-established effects on our hearts and lungs, but our increased understanding now also shows the damage poor air quality can do to every single organ in our body and our mental health too.’

According to recent statistics from Asthma + Lung UK, 77% of people living with asthma say that air pollution effects their health and wellbeing and 55% say they have difficulty breathing when air pollution levels are high.

Statistics outlined in the Clean Air Hospital Framework show that air pollution causes over 20,200 respiratory and cardiovascular hospital admissions per year in the UK , for asthma, coughs, bronchitis, lung cancer and pneumonia. London has some of the worst levels of air pollution in the country and, according to some figures, poor air quality is responsible for triggering asthma attacks in around 337,500 Londoners registered with the condition. Moreover, more than 1 in 10 children in London have asthma.

Ruth Fitzharris, whose son suffers from recurring asthma attacks, was told by a respiratory consultant that air pollution is likely to be exacerbating his symptoms. Their family lives in North London.

‘There are 30 children in my son’s class. In the first term, three of them were hospitalised with asthma attacks, which I just think is madness. It’s not like the school is even near a busy road,’ Ruth tells Air Quality News.

When her son received his diagnosis, Ruth said that advice from medical professionals was limited: ‘[The consultant] just told me to take back street routes where I could. That’s all he said, though.’

Ruth continues: ‘Imagine you’re pregnant and a midwife tells you air pollution is harmful to the unborn foetus. I mean, what are you going to do at that stage? It’s not like you can just up sticks and move house to an area with lower air pollution, can you?

‘It’s not like living in a quiet rural area would even guarantee low air pollution because you could be living next to someone who is constantly burning wood stoves. It’s almost inescapable.’

Ruth says she has been following doctors’ advice but she’s unsure if it’s making a significant difference: ‘I do take backstreet routes where I can and there’s certain places I don’t take my son. I don’t take him to high streets or grocery shopping, for example. But no one can really measure how much of a difference that makes.’ 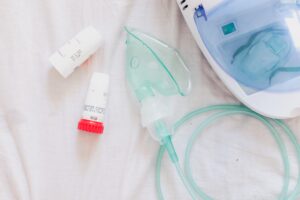 Tanja says that, while there are significant limitations to what doctors and patients can do individually, this does not negate the role of healthcare professionals, who still have a huge role to play in sign-posting patients with information about air pollution and limiting its effects on public health.

‘It’s not about stoking fear but about helping patients understand what actions they can take to reduce their own exposure as well as their own contribution to the problem. This information needs to be delivered in an empowering way,’ she says.

She adds that there is a range of practical advice medical professionals can give, such as encouraging patients with lung conditions to use their preventer inhalers, which build up protection in the airways over time, as well as monitoring the levels of air pollution on days where you intend to be outside. Adults should also be encouraged to quit smoking indoors and stop using wood burning stoves, which produce high levels of indoor air pollution.

She continues: ‘Much of the air pollution we are exposed to may be background driven, but that does not mean we have no power to take action. Simple advice we can give to most patients includes signing up to air pollution alerts to know when to take action, leaving the car behind, taking side streets when walking and cycling, and keeping indoor air well ventilated.’

Dr Whittamore echoes this view: ‘For patients thought to be at risk, they can outline both the long-term health impacts of air pollution and its sources, as well as the short-term exposure reduction measures that people can take to protect themselves, especially those in vulnerable groups.

‘Encouraging patients with lung conditions such as asthma to take their preventer medicines is a vital way the NHS can help, but sometimes getting this message to stick is a challenge, especially because it’s all too easy for routines to slip.’

He admits, however, that environmental justice plays a large role in tackling air pollution: ‘Healthcare professionals can only do so much in terms of protecting and helping patients. The real changes need to be made outside of the NHS to reduce the levels of toxic air in order to improve the nation’s health long term, especially in deprived areas where levels are often dangerously high.’

It is also worth noting the role of cars as accessibility aids for many disabled people. Advice which involves ditching the car and cycling or walking instead, while good for pollution levels, risks excluding those who rely on cars for essential transport.

A report by climate charity Possible and the University of Westminster’s Active Travel Academy revealed that disabled people often feel ‘left out’ of planning decisions which aim to reduce emissions. Medical professionals must take care to tailor their advice to individual circumstances, rather than making sweeping recommendations. As the authors of the report conclude, a transition away from cars has to be ‘fair for everyone’.

Dr Whittamore concludes: ‘Social and environmental justice has to be at the heart of our work to clean up toxic air pollution. It is not right simply to ask those most vulnerable to air pollution due to health conditions, or those living in more deprived areas to change their behaviour. Particularly when those who are more deprived are less likely to be causing the levels of pollution in their areas. In 2019, for example, just over half of those on the lowest incomes had access to a car or van, compared to almost 90% of those on the highest incomes.’

Evidently, the approach to tackling high levels of air pollution and the threat it poses to public health needs to involve healthcare professionals. They have a large role to play in informing the public about the risks of air pollution and individual mitigation measures available to them.

However, this is not enough in and of itself. Individuals can be limited by finances or access needs in what actions they are able to take, and healthcare professionals must take care to account for this in the consultation room.

Clean air zones, investment in green public transport and national awareness raising campaigns all play an important role in protecting us against the effects of air pollution. Healthcare professionals are just one piece of the jigsaw.

This feature originally appeared in the April issue of Air Quality News magazine – click here to read it in full.