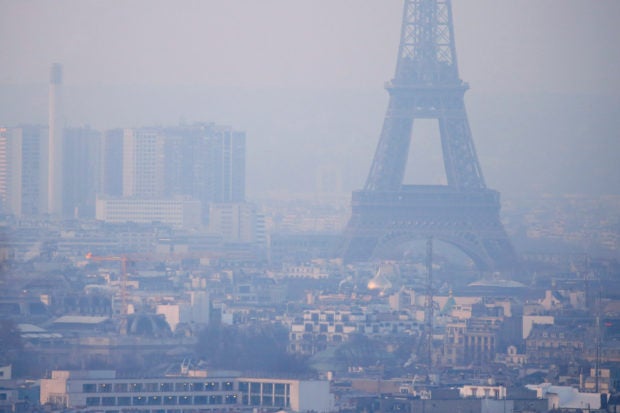 The Eiffel Tower is surrounded by a small-particle haze which hangs above the skyline in Paris, France, December 9, 2016 as the City of Light experienced the worst air pollution in a decade. (REUTERS/File Photo)

Air quality in Europe is improving but still poses high risks, the European Environment Agency (EEA) said on Thursday, as fine particles exposure led to at least 238,000 premature deaths in the 27-nation EU in 2020.

“Air pollution is still the largest environmental health risk in Europe,” the EEA said. “While emissions of key air pollutants and their concentrations in ambient air have fallen significantly over the past two decades in Europe, air quality remains poor in many areas.”

Between 2005 and 2020, the number of early deaths from exposure to fine particulate matter fell by 45% in the European Union, in line with the bloc’s zero pollution action plan target of a 55% cut in premature deaths by 2030.

However, 96% of the EU’s urban population was still exposed in 2020 to concentrations of fine particules that were above the World Health Organization’s guideline level of 5 microgrammes per cubic metre.

Air pollution aggravates respiratory and cardiovascular diseases, with heart disease and stroke cited as the most common causes of related early deaths.

“Further efforts will be needed to meet the zero pollution vision for 2050 of reducing air pollution to levels no longer considered harmful to health,” the EEA said.

The European Commission proposed in October to set stricter thresholds for air pollution but also to enhance the right of citizens to clean air. This could include provisions to claim compensation for health damage in case of quality standards breaches.

But air pollution does not only damage health.

According to the EEA, 59% of forested areas were exposed to harmful ground-level ozone in the European Economic Area, damaging vegetation and reducing biodiversity.

Tags: breath respiratory
« A Stressful Night of Dealing With My Husband’s Breathing Difficulties | ALS Takes Toll on Caregiver and Her Husband
A Roundtable Discussion On Mental Health »