A celebratory barbecue was held for the staff, board of directors and community partners of UHS Delaware Valley Hospital on Wednesday, July 20. Rolland “Boomer” Bojo, Jr., the hospital’s President/CEO was the grill master, cooking up chicken and brisket for the crowd.

Realizing that improvements do not happen without engaged staff, Boomer saw this as an opportunity to both thank the staff and make the public aware of the great work being done at UHS Delaware Valley Hospital because of the vison, talents and skill of staff members. He spoke of LPN, Ann Ostrander’s UHS system-level recognition as a Legendary Award winner for her willingness to always pitch in, across departments, to care for patients.

Boomer also spoke of new services such as nuclear medicine and stress testing; of enhanced services such as increased access to cardiology, gastroenterology and MRI. Two other major accomplishments cited included converting office spaces into additional patient rooms and the extension that was built to increase space in the physical and occupational therapy and rehabilitation services building. Cardiac and pulmonary rehabilitation program is also housed at that location.

Ed Snow, a board member for 22 years and mayor of the village of Walton, said UHS and DVH “have come a long, long way.” Boomer thanked the board of directors for their “support of everything we do here,” and UHS leadership, specifically, John Carrigg, President and CEO and Kay Boland, RN, Senior Vice President and Chief Operations Officer, “who value and trust DVH leaders to make the right decisions.” John spoke of staff being true healthcare heroes and thanked everyone for “everything you do, every single day.” Boomer also noted that he realizes DVH is truly part of the system, by the mere presence of so many UHS leadership team members. Kay’s remarks had everyone laughing, as she stated, that since Boomer’s arrival at DVH, “things have started booming.”

Assemblyman Joe Angelino was also recognized, he spoke of the quality-of-life hospitals bring to a community.  Joe Cetta, Walton town supervisor, said, the hospital is a draw for a number of people from the metro area.  He also “called out” Boomer for being modest and stated the people of the town appreciate this facility and appreciate you.” Finally, when referring to the hospital’s community partners, Boomer spoke of DVH’s infusion center and how “people from all over came to access life-saving monoclonal antibodies.” UHS Delaware Valley’s successes can only be achieved with “collaboration throughout the community.” 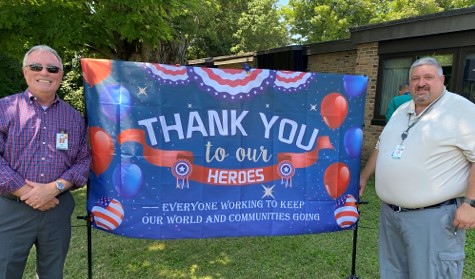