The shoulder joint is formed by the humerus, clavicle, and scapula. The humerus head should be present in the center of the glenoid fossa. It thus permits entire joint surfaces to be positioned consistently. Furthermore, the response force of the glenohumeral joint is confined inside the glenoid arc. However, a gross glenohumeral joint resultant force has been compromised as in the situation of a shoulder dislocation. As a consequence, its humeral head is displaced out of the articular surface [1]. Instability is a frequent condition that affects the shoulder, in the growing population. Most cases of shoulder dislocations are caused by trauma, and if the injury causes structural damage, it can lead to recurrent instability. Surgery is frequently recommended to restore the damaged structures in this group of individuals, especially if they are young and active. In the absence of trauma, a tiny percentage of individuals experience recurrent shoulder instability [2]. This is a more challenging situation to handle, and surgery is typically not indicated. The focus of therapy is conservative treatment in physiotherapy based on exercise to restore muscular strength, proprioception, and muscle coordination within the shoulder girdle [3].

The shoulder joint is most prone to dislocation within the body. Anterior shoulder dislocations are most frequently clinically diagnosed. In this condition, the arms of patients often appear internally rotated and adducted, revealing a lack of appropriate deltoid contour [4]. Here, we present a 36-year-old male with recurrent shoulder dislocation, which has been treated with a Latarjet procedure; the risk factors for complications and treatment failure after Latarjet surgery include the atraumatic mechanism of primary dislocation, anterior glenohumeral joint destabilization that can be treated surgically through repeated instabilities, dislocation arthropathy, and postoperative restriction of the external rotation. This coracoid graft is attached toward the anteroinferior aspect of the glenoid between three and five o'clock. However, the Latarjet surgical procedure reattached the labrum among the ordinary glenoid and the bone transplant. Based on one analysis, 2% had anterior glenohumeral instability. The glenohumeral joint is the most often misplaced synovial joint in the human body. Forceful adduction and external rotation of the shoulder joint can cause instability [5].

Here, the case of a 36-year-old male laborer who had been visiting the tertiary care rural hospital for the past five years with a primary complaint of shoulder pain and frequent shoulder dislocation is reported. The patient was apparently alright five years back when he allegedly fell on the ground sustaining an injury to the right shoulder. He later noticed that his shoulder was displaced from its original position. Then, he visited the nearby hospital in his village where an X-ray and magnetic resonance imaging (MRI) of the shoulder joint were done. In the hospital, he was managed by externally fixating (reducing) by pushing the shoulder inside and was suggest to immobilize the shoulder joint for 15 days. Then, a few months after the incident, the patient experienced the same problem repeatedly, and he reduced it by pushing the shoulder inside. However, he started experiencing similar episodes of shoulder dislocation especially after raising his hand overhead and hence had difficulty in daily activities such as combing hair and sleeping with his hand overhead. The patient indicated shoulder dislocation around 50 times in five years. The patient also had a history of seizures for five years accompanied by shoulder dislocation after which he used to experience unbearable pain in the shoulder joint. The patient was then referred to Acharya Vinoba Bhave Rural Hospital (AVBRH) for the management of the same and was admitted to the hospital, and all investigations were done. The patient was managed surgically by soft tissue reconstruction of the right shoulder with a Latarjet procedure. On postoperative day 1, he was referred to the physiotherapy department for additional care.

On general examination, the pulse rate was 76 beats/min, blood pressure was 126/82 mmHg, and height and weight were 179 cm and 60 kg, respectively, according to which body mass index calculated was 18.7. The patient experienced pain of 5/10 and 7/10 pre-operative and post-operative, respectively, on the numerical pain rating scale. On local examination, the patient was examined in a supine position, and on inspection, the right shoulder joint overlying skin appeared normal, and no scars and sinuses were present. On palpation, the patient's range of motion was terminally painful, active finger movement was present, and radial pulsation was present. Tenderness of grade 2 was palpated, and there was a spasm in the rotator cuff muscle (Figure 1).

Figure
1:
Pie shows pre-op on the left and post-op on the right of patient’s shoulder pain on the NPRS.

All the events that occurred during patient hospitalization are shown in Table 1.

Table
1: Events that occurred while the patient was hospitalized.

Many tests were conducted on the patient, including complete blood count, a liver function test, a kidney function test, a rapid blood sugar test, and blood group determination. However, no aberrant discoveries were made.

The X-ray was suggestive of anterior dislocation of the right shoulder joint fixed by coracoid graft (Figure 2). 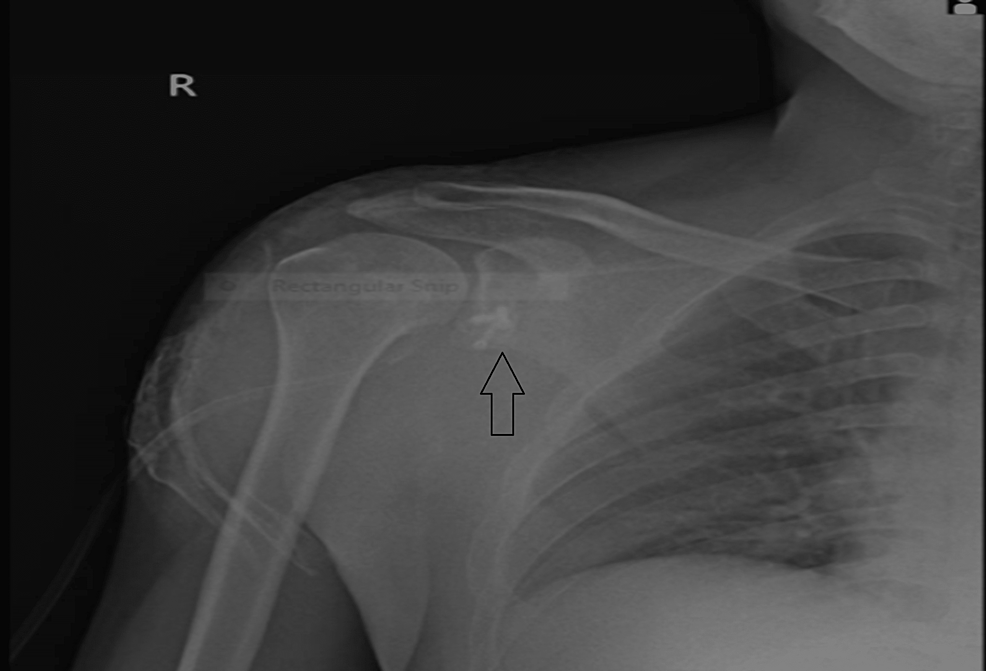 The MRI reports suggested that there was etiology of heterogeneous enhancement, and T2WI/PDF acts at hyper-intensities on the head of a humerus at the articular surface with erosion and adjacent soft tissue (rotator cuff tendons) enhancement.

There is e/o fluid intensity collection in the glenohumeral joint space and sub-acromial bursa. There is an e/o peripherally enhancing collection in the subscapularis muscle. There is e/o heterogeneously enhancement, and T2WI/PDF acts at hyper-intensities in the deltoid, supraspinatus, infraspinatus, and subscapularis, muscles, and biceps tendon at its insertion. Therefore, the impression is seen in recurrent anterior dislocation of the right shoulder joint (Figures 3, 4). 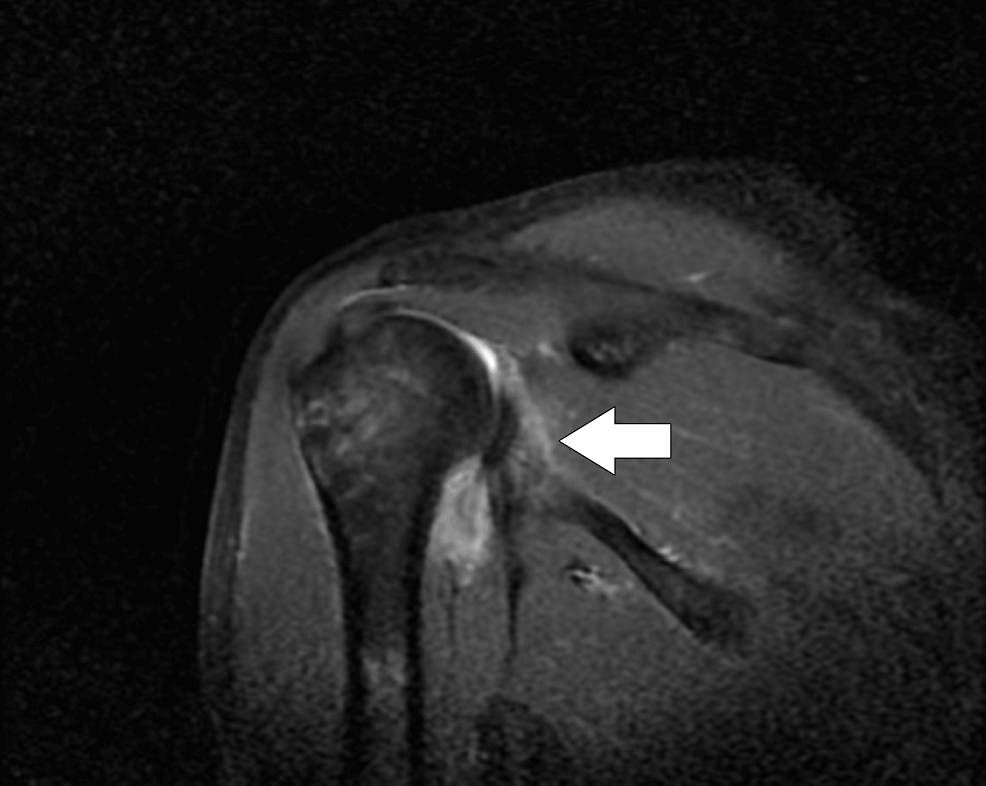 Figure
3:
MRI of the right shoulder joint taken in the sagittal plane indicated by the arrow. 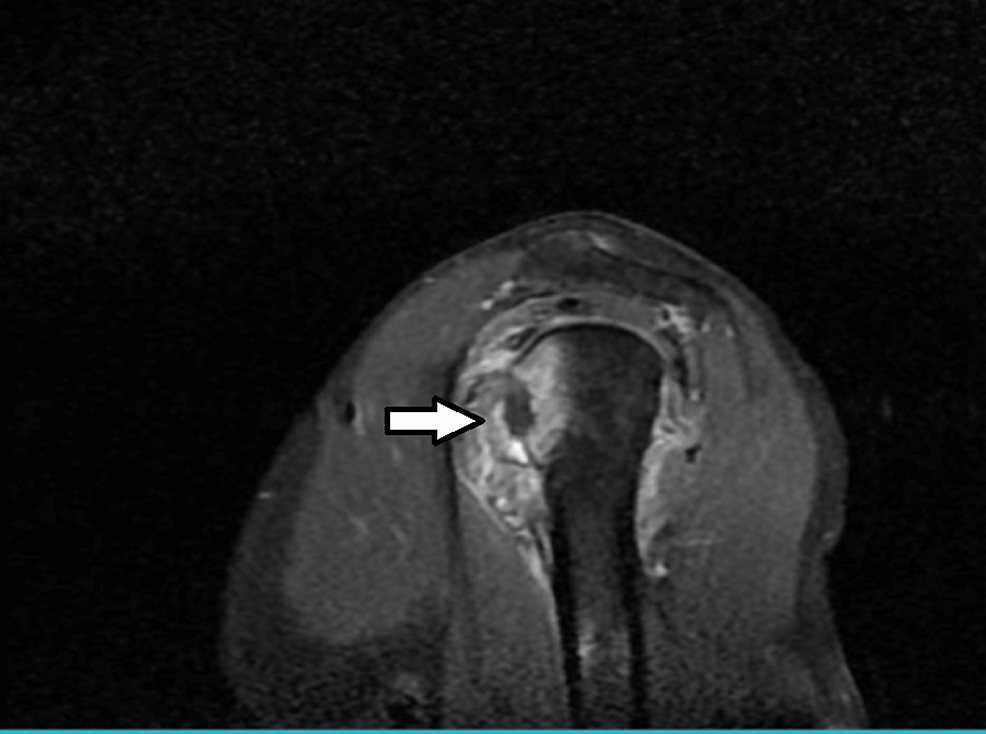 Figure
4:
MRI of the right shoulder joint in the coronal plane indicated by the arrow.

The patient has undergone surgery for soft tissue reconstruction of the right shoulder joint with a Latarjet procedure. Regional block anesthesia was given, and the surgical approach was deltopectoral. Under the axillary block, the patient was taken to the OT table under aseptic condition in the beach-chair position. Painting, draping, and scrubbing were done on the right upper limb. The coracoid process was palpated and approximately 8 cm incision was made from the coracoid's tip inferiorly. The deltopectoral interval and cephalic vein were detected. The cephalic vein along with the deltoid is reflected laterally, and soft-tissue dissection was accomplished to expose the coracoid process. The coraco-acromial ligament was detached, and coracoid osteotomy was done with medial protection. Subscapularis and capsule were cut in a t-shaped fashion, and the Fukuda retractor was introduced in the joint space. Glenoid margins are exposed, and the coracoid process was fixed with two Herbert screws (3.5 mm x 30 mm -1 and 2.7 mm x 30 mm -1 with suture anchor 5 mm -1) over the anteroinferior border of the glenoid. Capsule and subscapularis were sutured back, and a drain was placed. The closure was accomplished in layers. A sterile dressing was applied. The skin closure suture was Ethilon 3-0.

After the shoulder had been repositioned to its normal location, the rehabilitation phase, lasting approximately a year, was started. Exercise was part of physiotherapy care to repair modifiable physical deficiencies known to contribute to pain and dysfunction. Therapeutic exercise is commonly used in treating and managing a wide range of shoulder disorders, and it is highly suggested to address mobility, posture, muscular activation, proprioception, and strength dysfunctions.

To relieve pain before exercising, the patient was given analgesics and/or cold packs. Most patients experience aches, soreness, or stretching when performing these exercises. However, when the patient experienced acute and prolonged discomfort (for more than 30 minutes), it is a sign that the exercise should be modified to lessen intensity or duration. We used short, regular intervals (e.g. 5-10minutes, four times/day) instead of a single long practice. Repetition frequency was gradually increased. The patient was advised to follow the therapist's recommendations for the number of sets. The patient was told to get into the habit of doing the exercises in day-to-day life (Table 2).

The outcome measures are shown in Tables 3-5 and Figure 5.

Research shows that rehabilitation of recurrent rotator cuff injuries in older people with catastrophic anterior shoulder dislocations that do not show injury to the anterior capsule labral structure can offer enough stability to permit normal life. However, if a shoulder dislocation occurs again after rotator-cuff restoration, the reconstructed rotator cuff may deteriorate or rupture again, making restoration more difficult [6]. As the anterior joint capsule is maintained, imbrications are not possible. To avoid recurrence, it is necessary to do an additional anterior structural repair that can replace the rotator cuff and capsule [7]. A study concluded that the Latarjet approach for addressing instability was described by Lafosse et al. in 1954 [8]. The long-term outcomes of this operation have been positive. According to a study, an all-arthroscopic approach for the Latarjet treatment was reported for the first time in 2007 [9]. In the United States, surgeons most frequently recommend the Latarjet treatment in situations of substantial glenoid bone loss, postoperative instability, and patients participating in high-risk sports. Another analysis concluded that after performing the Latarjet surgery on a patient with a shoulder dislocation [10]. A second study outlined the real clinical result of such a policy. In a randomized, prospective trial, 40 patients were placed into two groups: internal rotation and exterior rotation. The internal rotation group had a 30% dislocation recurrence rate compared with 0% in the external rotation group [11]. According to research, rehabilitation following the protocol entails a continuous progression; it takes four to six months to restore joint mobility as well as endurance with conserving bone reinforcement [12]. A study analyzing these statistics indicated that the Latarjet operation is a success, as shown by the great contentment of patients and minimal risk of repeated instability [13].

The recurrent shoulder dislocation affects the muscle strength and has chances of ligament as well as tendon wear and tear. The above case demonstrates that a multidisciplinary team including physicians, orthopedic surgeons, and musculoskeletal physiotherapy treatment is profoundly found to be of utmost benefit for aiding symptoms like pain and improving functional abilities and the overall health of patients with recurrent shoulder dislocation. This case study demonstrated that effectiveness of musculoskeletal physiotherapy and the protocol planned was beneficial for the patient to perform his daily activities and work as soon as possible.

Tags: exercise sport STRESS surgery
« Why contemplation is overrated at the end of the year News
These Christmas Food Are Toxic For Pets »