Three quarters of Americans say they're stressed about the future of the U.S., as many prepare to vote and wait for the results of midterm elections.

This year, about half of Americans say they're stressed about the midterm elections. That's according to an October American Psychological Association report looking at America's top stressors.

The report also found 76% of adults said the future of the country is a significant source of stress in their lives. More than a third, 38%, said the state of the nation has made them consider moving to a different country.

"A significant portion of individuals are considering, 'Do I want to be here?'" That says a lot about politics," said Dr. Lynn Bufka, associate chief of practice transformation at the American Psychological Association.

Coping with the stress has much to do with managing how a person thinks or feels about uncertainty. Dr. Bufka says sticking to routines during election week can help.

"Have some things that we can count on that can be reliable and predictable, whether it's I always talk to my dad at 8:00 on Tuesday nights or if I have dinner with my family at 6:30," Dr. Bufka said. 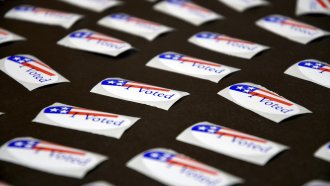 Election '22: What Matters: The Voter's Guide To The Midterms

Dr. Elissa Epel at the University of California San Francisco says that some stress, usually physical stress, can be helpful and a way to manage for someone who is anxious about politics right now.

"It makes our emotional response healthier," Dr. Epel said. "It makes our nervous system respond in a healthier way so that when we do hear bad news, we have more perspective on it. We recover from more from it more quickly. Our sleep is affected less."

That might that entail little blips of intense impact on the body.

"Something that actually gets our heart rate up in this positive way, and then we recover from it — sauna, heating our body up, a hot shower, a cold plunge, a cold shower," Dr. Epel said.

It could also look like taking deep breaths in a pattern to calm the nervous system if a person is getting heated in the moment.

"Breathing in before and breathing out for six or eight is all you need to do in this moment to have a very immediate outcome," Dr. Epel. said.

Experts say when uncertainty looms, whatever the stressor may be, focusing on what a person can individually control may be the most important. They add there's one thing in that regard a person can do this election: Vote.