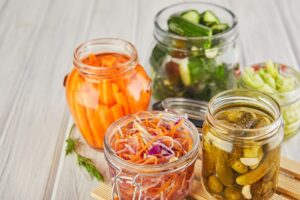 New research suggests that certain food may be able to lower stress.

Most people would agree that being under stress is not a good feeling. It can be exhausting, mentally and physically debilitating, and lead to all sorts of problems. While it’s impossible to avoid all stress in our lives, there are things we can do to lower our stress levels.

One suggestion is to increase your intake of fermented foods and fiber. Believe it or not, both have been shown to reduce cortisol levels, the hormone responsible for many of the negative effects of stress.

When most people think of stress management, they turn to exercise, meditation, and mindfulness. But according to a new study from members of APC Microbiome Ireland, eating more fermented foods and fiber daily for just four weeks could significantly lower perceived stress.

While a growing body of research shows that diet can affect mental health, the mechanisms are still not fully understood. However, one explanation that has been suggested for this link is that it could be the relationship between the brain and the microbiome.

This link is commonly known as the gut-brain axis. It allows the brain and the gut to be in constant communication, helping with essential bodily functions such as digestion and appetite. It also suggests that the emotional and cognitive centers in the brain are closely connected to the gut.

Researchers wanted to test how the gut microbiome could affect stress for this new study. To do this, 45 healthy people who follow a relatively low-fiber diet, aged 18 – 59, were examined. They were split into groups and randomly assigned a diet to follow for the four-week duration of the study.

Half were assigned a diet that would increase the amount of prebiotic and fermented foods they ate. This diet was known as the psychobiotic diet and included foods that have previously been linked to better mental health. The diet included fruits and vegetables high in prebiotic fibers, such as onion, leeks, apples, cabbage, bananas, and oats. They were also told to include 2 – 3 servings of fermented foods daily such as sauerkraut, kefir, and kombucha.

The psychobiotic diet only caused subtle changes in the function and composition of microbes in the gut, but there were significant changes in the level of certain key chemicals produced by these gut microbes. Some of these chemicals have previously been linked to mental health, which could explain the reduction of stress felt by participants on the diet.

These results suggest that specific diets can be used to reduce stress levels. They may also be able to help protect mental health in the long run since it targets the microbes in the gut. More research is needed about food facts to help us understand the connection between what we eat and how it affects our overall health.

Stress can take a toll on the brain, affecting concentration, memory, and overall brain function. The Smart Pill can help counteract these effects through nine ingredients that help support, nourish, and maximize brain health and cognitive function. These include ginkgo biloba, huperzine A, bacopa extract, rosemary extract, and a B vitamin complex. This unique formula helps boost circulation, fight free radicals, and help to promote clear thinking.

Tags: exercise STRESS
« 39 Stress Relief Products That Aren’t a Gimmick
15 Ways to Manage Stress When You Only Have 5 Minutes »