The Vikings Cornerback Battle Is a Breath of Fresh Air

Posted by: admin Categories: SPORTS & ATHLETICS
Comments Off on The Vikings Cornerback Battle Is a Breath of Fresh Air

Minnesota Vikings cornerback Cameron Dantzler (27) is shown during a timeout during an NFL football game against the Dallas Cowboys, Sunday, Nov. 22, 2020, in Minneapolis. (AP Photo/Jim Mone)

During both the 2020 and 2021 seasons for the Vikings, watching the secondary was oftentimes a cause of frustration rather than enjoyment. Far too often teams seemed to be able to move the ball with ease against the unit, leading in-part to the one of the worst final two-minute point differentials we’ve ever seen during 2021. During that time, the Vikings rolled out veterans like Bashaud Breeland, Mackensie Alexander, and Patrick Peterson to try and stabilize the room, only to see it crumble further beyond repair. Now ahead of 2022, Peterson is still around, but it is a group of talented youngsters battling it out for starting spots.

Thus far into training camp, the Vikings cornerback group is off to a tear. Much of the talk around the Vikings secondary has largely revolved around one player: rookie CB Andrew Booth Jr. The Clemson product was selected in the second round of the 2022 NFL Draft by the Vikings with pick No. 42. Many saw him as a potential first-rounder heading into April, but his injuries scared some teams off, allowing him to fall into the second round.

Heading into the second week of camp, Booth has certainly lived up to his round one potential. He got things started with a beautiful sliding interception while guarding Justin Jefferson. You can see it at the very end of this highlight reel posted by the Vikings Twitter account.

Booth displayed some ridiculous playmaking abilities while he was at Clemson, and that seems to have translated over to the Vikings very early on. Minnesota’s cornerback group ended the 2021 season with just four interceptions, and Breeland had two of them before being cut in December. If Booth can make more plays like this for the Vikings, he will quickly emerge as a fan favorite on the defense.

Booth is far from the only player to be excited about, though. For every play the rookie makes, he gets an answer from third-year CB Cam Dantzler. The 2020 third-round pick drew a short straw in 2021, landing in Mike Zimmer’s doghouse for much of the year even after a spectacular rookie season. Now in a new system, he is taking advantage of every opportunity he gets.

Dantzler has often drawn the assignment of guarding Adam Thielen, and reports are saying that it has been a very heated battle on the outside. Neither player has truly gotten an edge over the other, with Dantzler winning some plays and Thielen winning others.

If both Booth and Dantzler continue to dazzle in their opportunities, we may get to the point where both of them are viewed as starting quality CBs. With Patrick Peterson now in his age-32 season, this could move him into a role where he can fill in for spurts or just move into the slot full-time. A smaller role may eventually be necessary for the aging cornerback, especially if he hopes to extend his legendary career.

Most importantly though, if these two cornerbacks are performing this well against one of the best wide receiver duos in the NFL, imagine what they can do against other teams. Especially in the NFC North, wide receiver depth is very minimal for the other three teams. A pair of young lockdown cornerbacks will make things very difficult for Minnesota’s opponents this season.

We still have a couple weeks until these guys take the field in a preseason matchup, but personally, I am very excited to see what the duo of Booth and Dantzler can become this season for the Vikings. After two years of massive struggles in the secondary, it seems the Vikings have finally found their future and identity at the cornerback position. 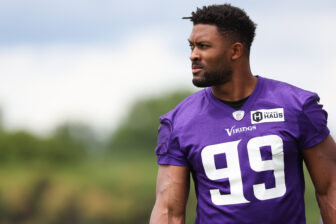