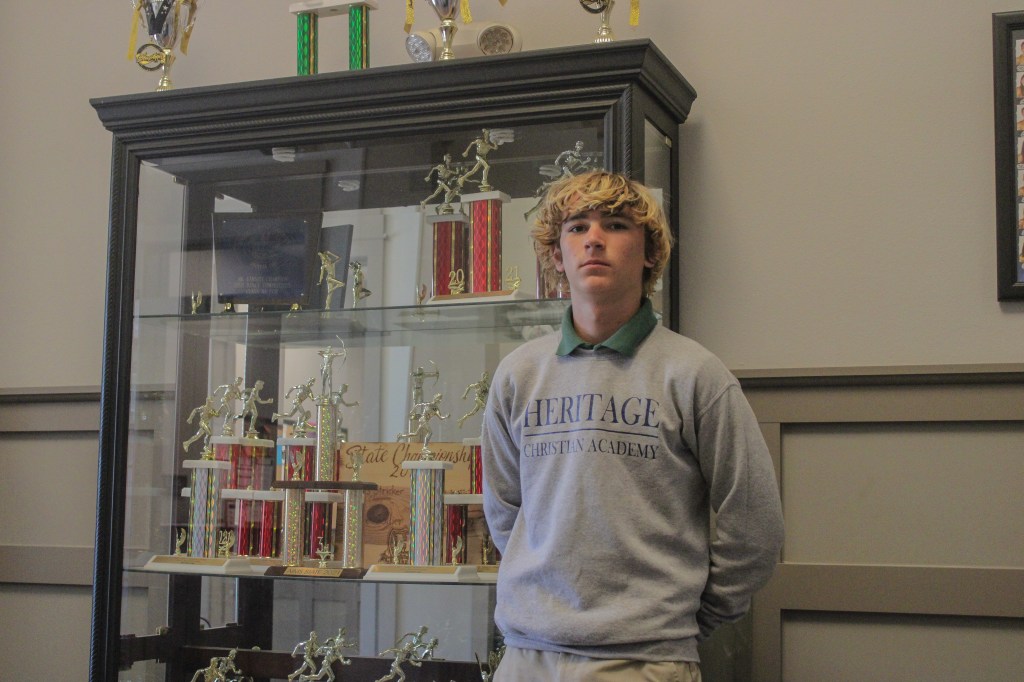 Dallas Stricker stands in front of the many trophies and state championships Heritage Christian Academy has collected over the years.

Dallas Stricker is a 15-year-old student athlete at Heritage Christian Academy who was diagnosed with thalassemia two years ago. Thalassemia is an inherited blood disorder that results in the body producing less than normal amounts of an oxygen-carrying protein.
Stricker says he’s pretty sure he’s had this condition all his life.
“It’s new, I just found out but I’ve been probably going through this my whole life, ever since I was little,” said Stricker.
At the age of 7, Stricker set a Mississippi state record for the half marathon and 10K race.
Since then he’s been stamping his name all over the record books year after year, continuing to dominate in his age group.
According to MileSplit, Stricker leads the MSAIS (Midsouth Association of Independent Schools) league in the 800m, 1600m and 3200m races.
His records beat all Mississippi high school students in the one and two mile and 5k race.
At 15-years-old he set state club records in the one-mile, 8K, 10 mile, 15K and the half marathon.
With all these accolades Stricker’s next goal is win at state again.
“Also my biggest [goal], like what I want to do when I get older, I want to go to the Olympics,” he said.
Breathing is one of many challenges Stricker faces as a high level runner with thalassemia, but he’s learned to utilize breathing exercises along with occasional nightly oxygen tanks that help him recover and grow his red blood cells allowing him to breathe better.
He also takes medication and supplements.
But Stricker’s competitive drive motivates him to continue running.
“I’m very competitive, I hate losing no matter what sport I play,” he said. “I like going against high schoolers older than me, and beating them.
I think it motivates me more to go out and train harder. It gives me motivation when I’m training.”
Stricker’s father, John Stricker, who also trains his son, is one of his biggest supporters. As you could imagine John Stricker gets stressed whenever he sees his son grab his chest after running a race or a work out.
“It makes me nervous and I shut it down (Stricker’s training),” said John Stricker.
Stricker’s father recommends any parent or coach who has a child complaining about chest pains to get it checked out because Stricker did not know what was causing Dallas to experience those pains 2 years ago.
“He went through all kinds of stress tests, heart tests and all this other stuff and that’s when we found out about the thalassemia. So I would say if you don’t know what you got don’t take it lightly,”… that’s my concern and that’s why I wanted to bring it up to people,” he said.
While Stricker was blood tested when he was born, no doctor told him he’s had thalassemia till 2 years ago.
“It could impact someone not knowing,” said John Stricker.
Since being diagnosed, Stricker’s training has changed to give him and his body more time to recuperate in between work outs.
“Sometimes it’s not about winning or losing, getting first, or second place or third place… this is my motto you don’t have to win, but ‘PR-ing’ (beating your personal record) it’s the best thing out there because you’re getting faster.
So my motivation to everyone, keep going through it no matter how much it hurts, if you think you’re doing better, that’s good,”
Stricker’s reason for wanting to be the best stems from seeing his older brother and two sisters run.
Watching them sparked a running spirit in Stricker.
“Ever since I was a little kid I was always running, so I picked up wanting to do cross country and track… I had siblings kind of show me and I leaned off what they did.”