Posted by: admin Categories: SPORTS & ATHLETICS
Comments Off on Q&A with the surgeons who developed a world-first brain tumour treatment

In early January, a team of researchers and physicians from Toronto’s Sunnybrook and SickKids hospitals completed the first step in a world-first clinical trial of a new treatment for pediatric brain cancer. They used MRI-guided ultrasound to temporarily open the blood-brain barrier and deliver chemotherapy to a malignant, inoperable brain-stem tumour called diffuse intrinsic pontine glioma, or DIPG, most commonly found in children. Patients currently have an average life expectancy of less than a year after diagnosis.

The study’s co-principal investigators are James Rutka, a pediatric neurosurgeon at SickKids Hospital who sub-specializes in brain tumour and epilepsy surgery, and Nir Lipsman, a neurosurgeon and director of Sunnybrook’s Harquail Centre for Neuromodulation. Here, they share what happened during the groundbreaking trial:

Congratulations on this achievement. To start off: what is a diffuse intrinsic pontine glioma?

Rutka: DIPG is the second-most-common malignant brain tumour in children, and primarily affects kids aged five to seven. Typically, patients present with symptoms that can include facial weakness, double vision and ataxia (or incoordination).

What’s the typical outlook for children with this diagnosis?

Rutka: This tumour steadily and rapidly grows within the brain stem. Without treatment, children survive around six months; with treatment, which includes radiation therapy, they might last as long as 18 months. As surgeons, we feel helpless with diagnosis, because there’s nothing we can do surgically to extend life for those who have it.

That’s shockingly grim. Why is it so difficult to treat?

Lipsman: DIPG is located in the brain stem—the lower part of the brain connected to the spinal cord—which controls autonomic bodily functions like heart rate, breathing, consciousness, swallowing and many others. One cannot intervene in the brain stem surgically in any capacity, let alone resect a tumour, without risking any or all of these functions.

In short, the challenges in treating this tumour are many, but one of them is the blood brain barrier, or BBB, the border of cells that prevents certain solvents circulating in the bloodstream from entering the brain. We have chemotherapy drugs that may treat the tumour, but because these drugs don’t cross the BBB, we just can’t get them there.

And here we are, for the very first time in history, using imaging and sound waves to open the blood brain barrier and deliver medication to the brain stem. How did you come to pull it off?

Lipsman: It was a combination of the right expertise at the right time. Dr. Rutka led the pre-clinical work that showed for the first time, using animal models, that it was safe and feasible to use focused ultrasound to deliver chemotherapy for DIPG. Essentially, the technology uses soundwaves to non-invasively make a temporary opening in the BBB, which lets the medication in. His work gave us compelling pre-clinical rationale to translate this to a human population.

At the same time, the work I led at Sunnybrook amassed an experience of BBB-opening in adult patients across multiple indications, including primary and secondary brain tumours, Alzheimer’s and Parkinson’s disease. This gave us compelling data that opening the BBB in human patients can be done safely. 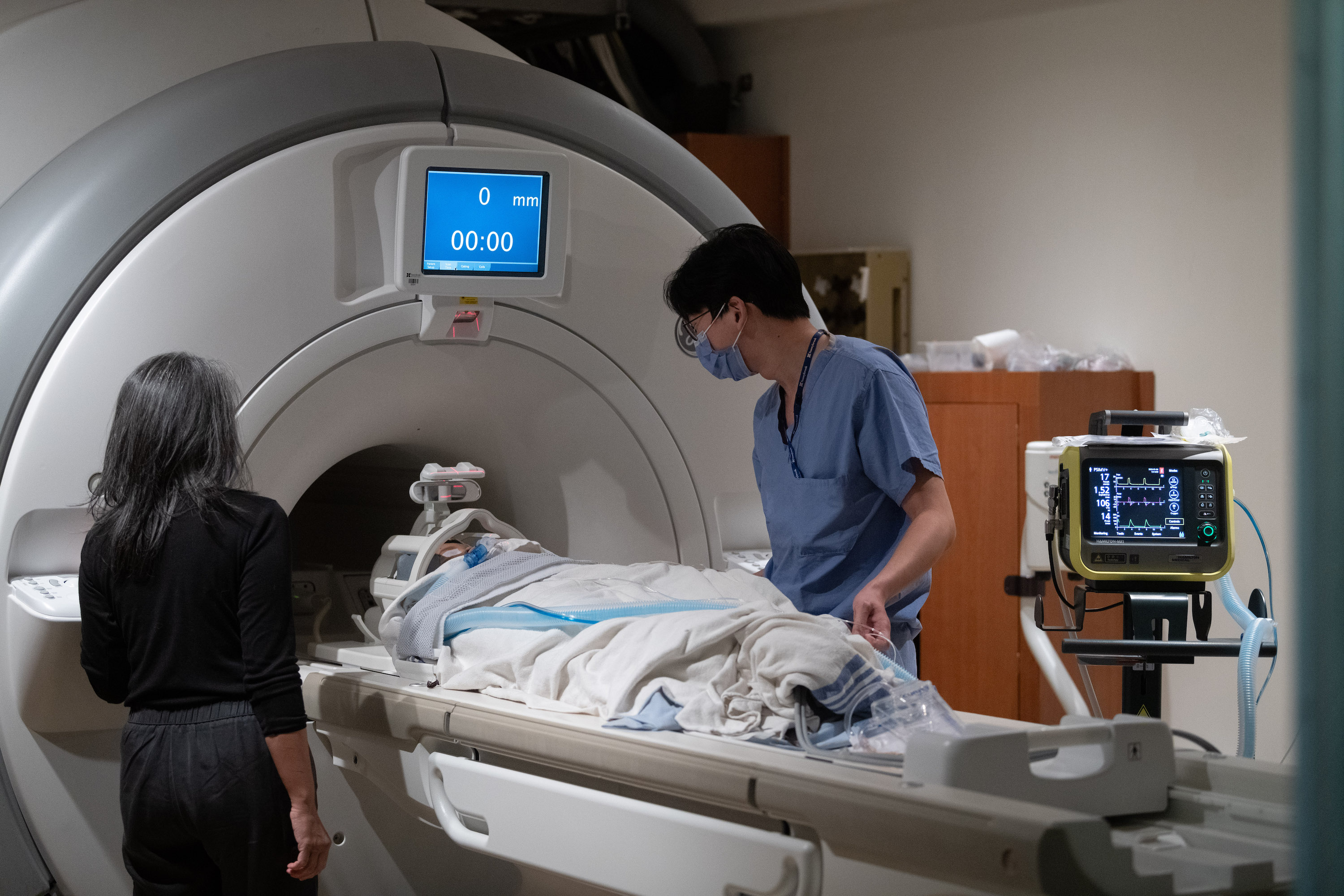 A five-year old patient is in the MRI during treatment

Walk me through January 4, the day you treated your first patient.

Lipsman: The patient is a five-year-old girl: the youngest allowed for our trial. We all had sensitivities, obviously, to treating such a young patient. There was certainly an emotional element. The patient’s family was hopeful but realistic, and really invested their trust in the research team.

How many people were in the room?

Rutka: Around 20 people, including nurses, physicists, imaging scientists, anaesthetists, and Dr. Lipsman and myself. The family arrived around seven in the morning at the front doors of Sunnybrook. It was a long time coming—we had initially planned to do the procedure in December, but the patient unfortunately came down with a viral infection, so we had to wait. There was all this anticipation leading up to it, because the family really wanted to start the therapy as soon as possible.

Lipsman: She was anaesthetized, and then we applied a head-immobilization device, which is essentially a crown or ring that keeps the head steady. That frame was then attached to a helmet-like device that delivers the ultrasound. The patient went into the MRI machine, which is where the entire procedure took place. First, we took about an hour and a half to do detailed imaging of the brain to make sure the tumour hadn’t changed since we last checked. Then we infused the chemotherapy, which we believe has to be actively circulating in the bloodstream when the BBB opens.

How did you feel approaching this critical juncture in the procedure?

Rutka: We were a little anxious about what would happen, since it had never been done in this region of the brain before. A complication could be devastating in this region of the brain, since it could affect vital bodily functions, and may have led to a termination of the study. As we opened the BBB in a series of layers, we did special MRI sequences to look for things like bleeding and swelling in the brain. The treatment was extremely well tolerated, and there were no adverse events. 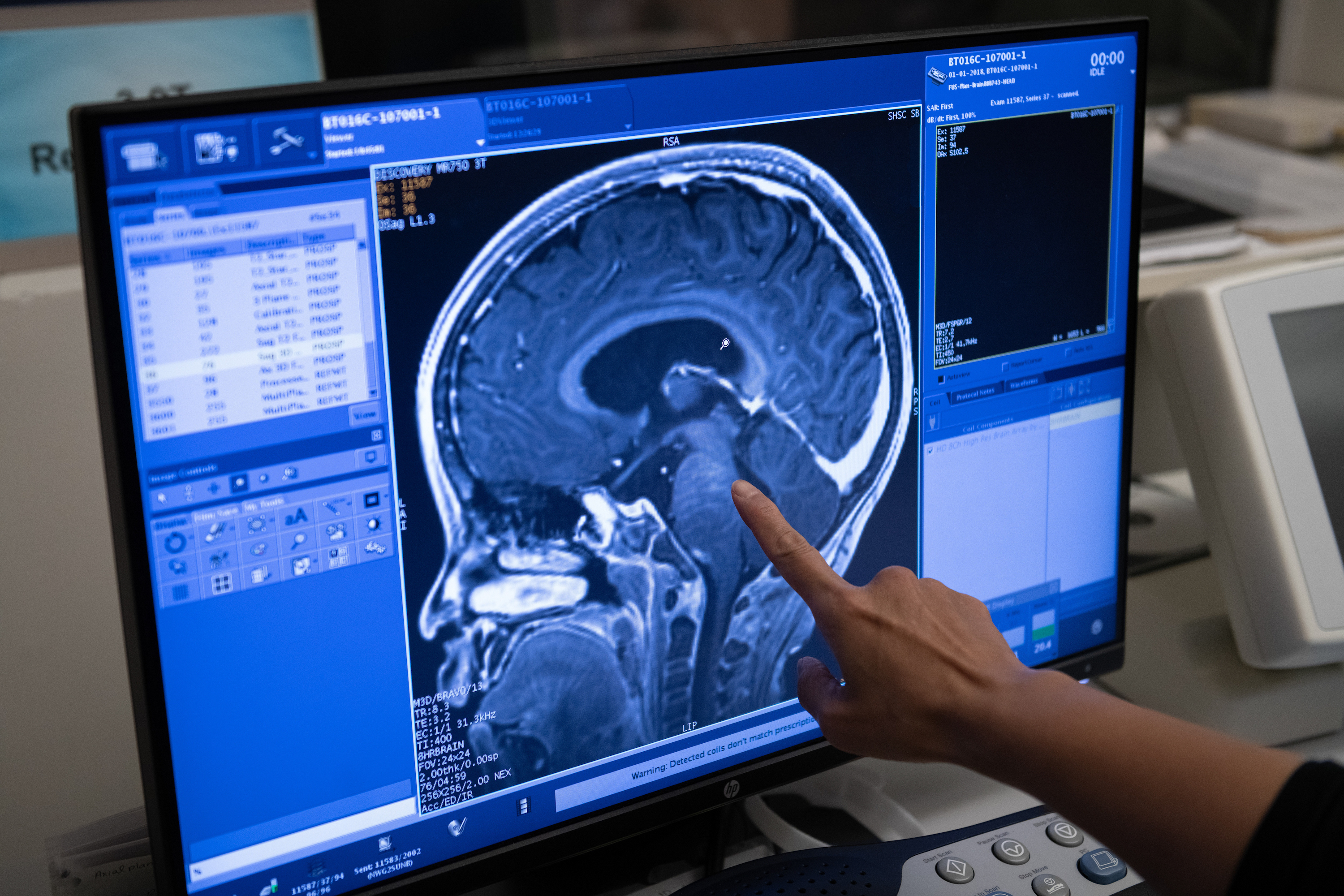 That must have been an incredible relief.

Lipsman: We didn’t see any abnormalities at all, which was the best-case scenario. In fact, the treatment went so well that we wondered if we had successfully opened the BBB in the first place, which we needed to confirm with another MRI with contrast. That’s because contrast will only go to the parts of the brain where the BBB is open.

We confirmed that it was actually open, which means the chemotherapy did get into the brain. That image was very exciting: the culmination of many years of research! After that was done, the patient came out of the scanner and was observed for two hours at Sunnybrook before moving back to SickKids. She was back in the recovery room making jokes two hours after the procedure.

The next morning, she had another scan—this time, we confirmed that the barrier had closed. The closure is just as important as the opening, since we want to make sure it’s a reversible procedure.

What happens next for this patient, and for the others in this study?

Lipsman: Every patient will undergo three treatments about four to six weeks apart. If all goes well, we’re looking to treat 10 patients in six to 12 months.

What has the reaction from the medical community been like?

Rutka: Since we’ve launched the trial, I’ve had no shortage of people from around the world asking what the entry criteria are, since there are so many children worldwide afflicted with this condition. I hope this will be the start of several trials. For this trial, we chose the chemotherapy drug doxorubicin, a potent drug that’s never been used for brain tumours because it doesn’t cross the BBB. But there are a host of other drugs, either singly or in combination, that we can use to treat this disease. In the future, we can hopefully focus on the tumour’s molecular genetics to target the most effective drugs.

What’s the potential impact of this research beyond DIPG?

Lipsman: This method—getting medication into the brain stem (or another part of the brain) via focused ultrasound—can be used for more than just chemotherapy. In theory, we could open the blood-brain barrier to deliver any promising medication to the brain. Parkinson’s is one we’re actively working on: we recently published a phase-one trial where we showed that in patients with genetic-form Parkinson’s, we can safely deliver promising enzyme replacement therapy. We’re also interested in metastasis: using BBB opening to deliver immunotherapy and antibody treatments for breast cancer that’s metastasized to the brain.

In short, it’s a broad tool that could be used across many different indications. It’s all part of a larger trend in neurosurgery towards non- or minimally invasive methods of intervening in the brain.