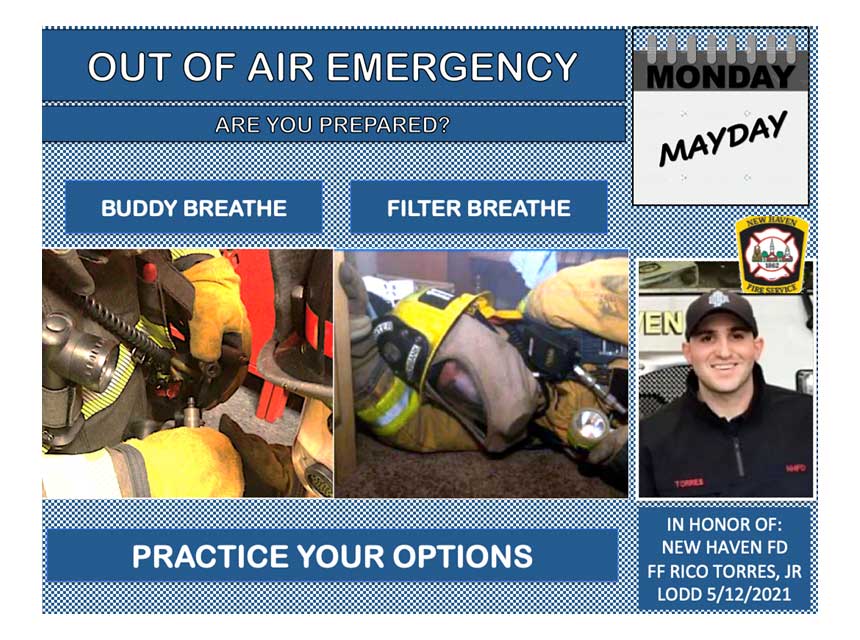 The staff here at Mayday Mondays just returned from the Fire Department Instructors Conference (FDIC) in Indianapolis. This annual fire service tradition provides attendees with lectures and practical firefighter training on various fire (and EMS) topics and tactics. In addition, fire service vendors and manufacturers show their latest product and equipment to thousands of visiting firefighters. A Mayday Monday lecture was held on Thursday to several attendees. Thanks to Fire Engineering for supporting the Mayday Monday mission.

This month we honor New Haven (CT) Firefighter Rico Torres, Jr. On May 12, 2021, the New Haven (CT) Fire Department was sent for a fire in a two-story dwelling. There, units found fire in the basement and two residents trapped in the building. Firefighters were able to rescue the two occupants but during the firefight Torres transmitted a Mayday call. Rescuers found Torres along with his officer in charge, Fire Lieutenant Rankins. Both members were unconscious. Rankins was critically injured and Torres would not survive. The medical examiner ruled Torres’ accidental death was caused by asphyxiation due to lack of breathing gas. Here are links to two news reports on Firefighter Rico Torres: Fire and Cause of Death.

To honor Firefighter Torres, this month’s skill-drill is to prepare for an out of air emergency. We will practice two possible solutions to out-of-air emergencies.

Please get out and practice these skills/drills. We don’t want the first time you experience an out-of-air emergency to be in an IDLH-atmosphere.

Mayday Monday: Get Out in Your District