A few days after her baby arrived, she said she felt like she was in trouble. Her blood pressure spiked and she had trouble breathing.

"I have an amazing, phenomenal husband," Baker says. "And, I'm a new mom to a beautiful 3-month-old baby."

The 38-year-old Lawrenceville makeup artist is now the mother of four boys.

During her last pregnancy with Denim 6 years ago, Baker says she had symptoms of high blood pressure, like headaches, swelling, feeling dizzy.

"But, with this pregnancy, oh, my goodness, It was too rough," Baker says.  "I was like, 'What is going on?' I couldn't get my blood pressure, they couldn't get it, to regulate with medications or anything." 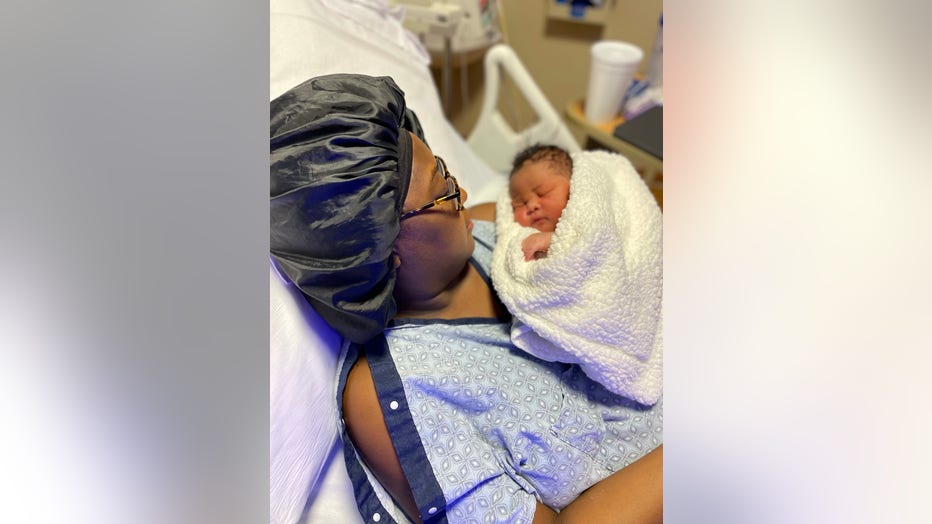 After Legend was born December 8, 2021, at Northside Gwinnett, Baker's blood pressure was borderline high, but nothing alarming.

So, she was discharged.

But, within days, the swelling and symptoms returned.

Only now, she was also having a hard time breaking.

"My chest felt, like, I know what it feels like to have pneumonia," Baker says. "So, it felt like my lungs were filling up with fluid."

By Dec. 18, she says, it was clear something was very wrong.

"That's when my blood pressure was 215/87," Baker says. "It literally felt like somebody was squeezing my heart, and squeezing my air out. I couldn't breathe. It was really bad."

Rushed back to Northside Gwinnett, Baker says, she was worried she was dying.

That is when Northside cardiologist Dr. Michele Voeltz, who specializes in cardio-obstetrics, or heart disease during and after pregnancy, was called in to help Baker.

"By the time La'Keshia made it back to us, her blood pressure was clearly elevated," Voeltz says. "We diagnosed her with postpartum preeclampsia."

Voeltz says preeclampsia, a blood pressure disorder, typically occurs during pregnancy, but about 10% of cases occur after the baby is delivered.

In Baker's case, swelling was a key warning sign.

"Anytime swelling increases rather than decreases, we want you to be seen," Dr. Voeltz says. "Swelling should decrease every day after delivery.  Also, shortness of breath post-delivery is not normal."

Voeltz says Baker was at elevated risk of developing preeclampsia because she is Black, 38, which is considered older by pregnancy standards, and because she has had several pregnancies.

"In the Black community, preeclampsia is not talked about as much as it should be," Baker says. "I really didn't know how severe it could get. I felt like I was on my deathbed. I was even told by the doctors, that, had I not gotten to the hospital when I did, I wouldn't have made it."

Dr. Voeltz tells new moms to check their blood pressure regularly for the first four weeks after their baby is delivered.

"We generally see postpartum preeclampsia within the first 7 to 10 days after delivery," she says. "So, it usually shows up pretty quickly."

Baker spent five days in the hospital, as they worked to get her blood pressure under control.

La'Keshia Stewart Baker is doing well and taking a medication to lower her blood pressure.

She hopes her story will empower other women to get help for pregnancy complications.

"If anything feels off, say something to your doctor," she says. "Literally, keep bothering them. That's what they're there for. Say something."

Tags: pneumonia
« Meditate Your Way to Itch-Free Skin
History of allergies may be associated with increased risk of high blood pressure, heart disease »