Rising University of Texas junior Carson Foster sent shockwaves through the swimming world last night, throwing down a 1:53.67 200 fly stunner at the Speedo Sectionals in Austin. The swim marked a nearly five second drop from his lifetime best, made him the 3rd fastest American ever in the event and was just hundredths off of the bronze medal swim from last month’s World Championships in Budapest.

The swim was also notable in that it broke Michael Phelps’ last remaining pool record at the famed Texas Swim Center. In 2001, Phelps set his first-ever World Record in the 200 fly at Texas, swimming a 1:54.92. He later returned to Austin to lower his pool record to 1:54.79, the record that Foster broke last night. 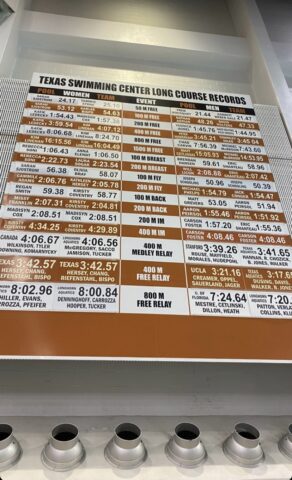 In the process of breaking Phelps’ pool record, Foster’s swim had a notable similarity to the GOAT’s signature style: breathing every stroke during the race. While Phelps did not breathe on his breakout strokes from each wall, Foster’s only stroke where he didn’t breathe was the very first stroke of the race.

So is this a specific strategy implemented by Foster and his Texas coaches in what many had considered an “off” event coming into the meet? Texas head coach Eddie Reese has publicly commented that he finds value in having non-breathing strokes during fly races, so the every-stroke pattern was a surprise to some.

In comments to SwimSwam, Texas associate head coach Wyatt Collins seemed to confirm that they had viewed the 200 fly as more of an off event for Foster that hasn’t received much attention in training or strategy thus far. The approach going into the race was “let’s see what we can do,” and the resulting breathing pattern was more of an instinctual move by Foster, as opposed to a specifically prescribed strategy.

After last night’s massive swim, Collins hinted that the 200 fly will come more into focus for Foster. Collins commented that many of the world’s top 200 flyers, including current World Record holder Kristof Milak, breathe frequently with only occasional non-breathing strokes. The Texas staff views this as a model for Foster going forward, and likely will work on implementing a breathing pattern with occasional non-breathing strokes, especially on the front half of the race.

An unexpected potential breakout star in the men’s 200 fly is a welcome surprise for the US National team, as the Americans have struggled in the event since Phelps’ retirement after the Rio de Janeiro Olympics. The Americans have not had an individual medalist in the event at the Olympics or long course World Championships since Phelps retired, and the most recent non-Phelps medalist was Tom Malchow at the 2003 World Championships, where he finished with the bronze.