It has been observed that peripheral oxygen saturation (SpO2) measured by pulse oximeter is consistently lower than arterial oxygen saturation (SaO2) measured directly by blood gas analysis. In this study, we aimed to evaluate the correlation between SpO2 and SaO2, and SpO2 and partial pressure of oxygen (PaO2), and compare the SpO2/FiO2 (SF) and PaO2/FiO2 (PF) ratios in patients with coronavirus disease 2019 (COVID-19).

A pulse oximeter is a vital tool in the diagnosis and management of COVID-19. In our study, SpO2 was found to have a positive correlation with SaO2 and PaO2 with acceptable sensitivity but low specificity in estimating mild ARDS. Therefore, pulse oximetry can be used as a tool for the early diagnosis of mild COVID-19 ARDS as per the given considerations and clinical correlation.

Coronavirus disease 2019 (COVID-19), caused by severe acute respiratory syndrome coronavirus 2 (SARS-CoV-2), is an ongoing pandemic, constantly straining the healthcare systems worldwide [1]. Hypoxemic respiratory failure due to viral pneumonia is a common cause of hospital visits and ICU admissions. Further elaboration of the clinical spectrum of SARS-CoV-2 entails the concept of happy hypoxemia, which has been regarded as a clinical condition with no or minimal respiratory distress, despite a low room-air oxygen saturation as shown by a pulse oximeter [typically, peripheral oxygen saturation (SpO2) <90%] [2]. The possible pathophysiological mechanism behind this has been hypothesized to be the phenotypic presentation of patients, such as low elastance (and consequent high compliance), low ventilation-perfusion, and low lung recruitment as a consequence of systemic inflammatory response to SARS-CoV-2 infection [3,4].

The expeditious deterioration in the clinical condition leading to acute respiratory distress syndrome (ARDS) has mandated the utilization of other means of oxygen supplementation such as a high-flow nasal cannula, non-invasive ventilation, or endotracheal intubation, depending on the clinical scenario and the judgment of the treating physician [5]. In this context, the necessity for a rapid, non-invasive screening modality for the assessment of peripheral capillary oxygenation and early decision-making for the planning of management is of paramount importance.

The quantification of peripheral oxygen saturation as measured by a pulse oximeter (SpO2) has been reported to be a surrogate for partial pressure of oxygen (PaO2) for the diagnosis and management of ARDS [6]. It has been observed that oxygen saturation measured by pulse oximeter (SpO2) is consistently lower than arterial oxygen saturation (SaO2) measured directly by blood gas analysis [7]. However, the literature on the correlation between SpO2, SaO2, and PaO2 in viral pneumonia caused by SARS-CoV-2 is sparse. In light of this, we planned this study to evaluate the correlation between SpO2 and SaO2, and SpO2 and PaO2, and compare the SpO2/FiO2 (SF) and PaO2/FiO2 (PF) ratios in patients with COVID-19.

In this cross-sectional study, 70 consecutive COVID-19 patients who were admitted to a designated tertiary level COVID-19 facility based at the National Cancer Institute (Jhajjar), AIIMS, New Delhi from June 17 to June 30, 2021, were enrolled. The study was approved by the Institutional Ethics Committee (IEC-74/05.02.2021, RP-18/2021). All patients enrolled presented on room air to the hospital. When a patient got admitted to the ward, as a routine practice, the SpO2 was recorded by a pulse oximeter (CARESCAPETM Monitor B850, GE Healthcare Finland Oy, Helsinki, Finland with Nellcor™ SpO2 technology, Medtronic, Dublin, Ireland), and the arterial blood gas sample was taken in a 2-ml syringe (heparinized) and was sent for arterial blood gas sampling (Blood Gas System GASTAT-700Model, Techno Medica Co., Ltd., Yokohama, Japan). Thereafter, oxygen therapy was initiated based on the assessment of SpO2 and clinical signs. SaO2 and PaO2 were documented from arterial blood gas analysis. The SF ratio and PF ratio were calculated and correlated. FiO2 level was taken as 0.21 in all patients.

Adult patients on room air with COVID-19-positive reports either by reverse transcription-polymerase chain reaction (RT-PCR) or rapid antigen test of the nasopharyngeal swab were included in this study. Exclusion criteria were patient refusal to participate in the study, patients showing signs or a history of peripheral ischemia, weak pulses, those with negative modified Allen’s test, respiratory distress (respiratory rate >24/minute), and those experiencing shortness of breath, patients undergoing any sort of oxygen therapy, and those with a systolic blood pressure <80 mmHg; in case of any exclusions or refusals, the next eligible patients were included in the study [8,9].

The sample size for the study was calculated by using the Bland-Altman method with data assumptions based on a similar study by Wilson-Baig et al [7]. Assuming 95% confidence interval, 80% power, a mean difference of 5.3%, precision of 1.8%, and a maximum allowed difference of 10%, a minimum sample size of 60 patients was determined using MedCalc V.19.

Statistical analyses were performed using SPSS Statistics version 22.0 (IBM, Armonk, NY). Quantitative data were presented as mean ± standard deviation (SD), while categorical data were demonstrated as frequency and proportions (%). The categorical parameters were compared by chi-squared tests, and the continuous variables were compared by independent t-test. The relationship between SF and PF ratios was described by a linear regression equation. Receiver operating characteristic (ROC) curves were plotted to determine the sensitivity and specificity of the SF ratio threshold values correlating with a PF ratio of 300 or below (mild ARDS). A p-value <0.05 was considered statistically significant. A Bland-Altman analysis was performed for the mean difference and proportional bias between SpO2 and SaO2 and SF and PF ratios.

Table
1: Baseline clinical characteristics of patients enrolled in the study 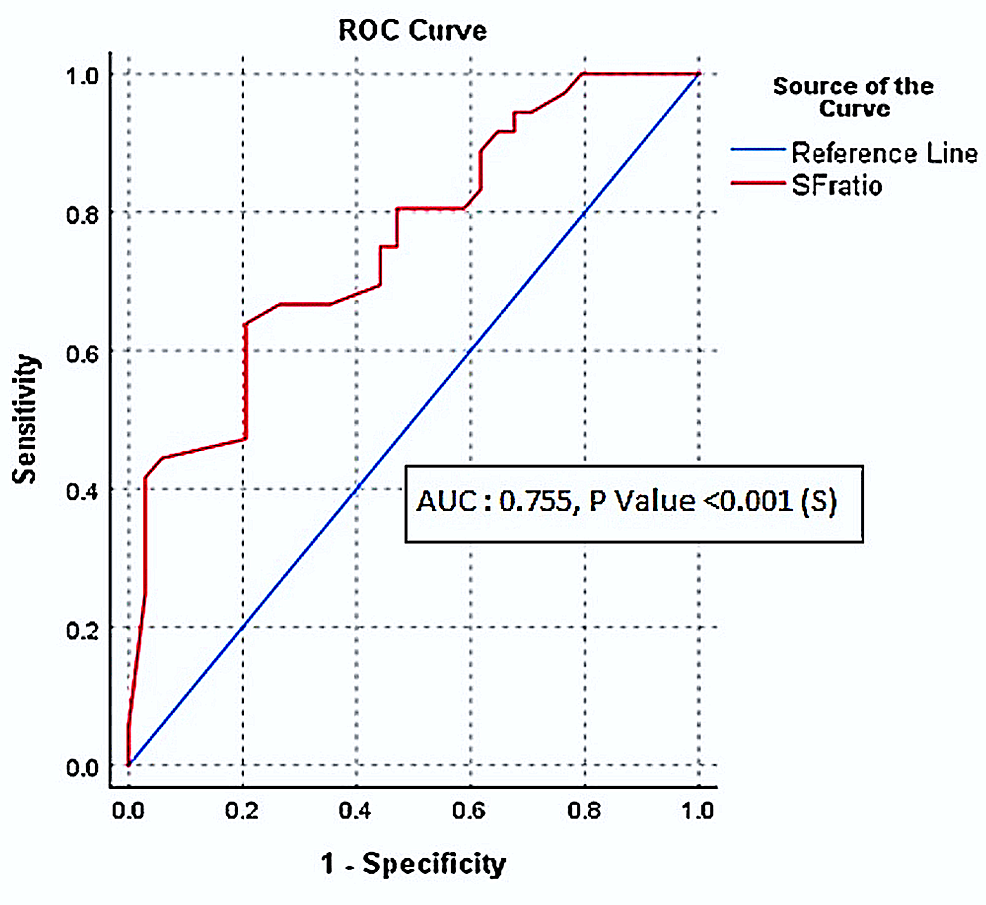 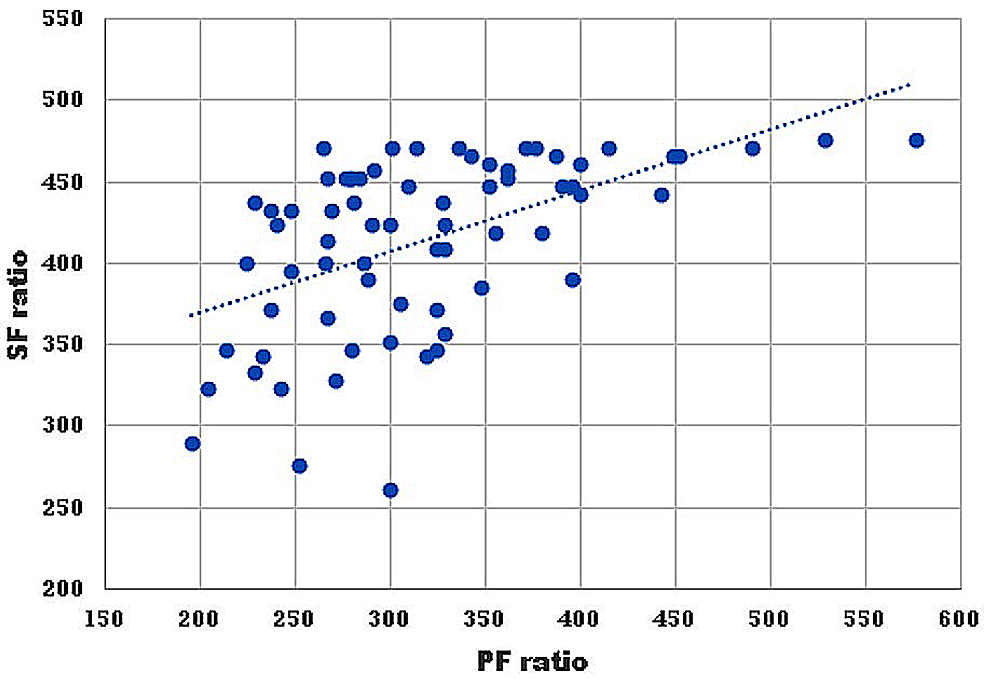 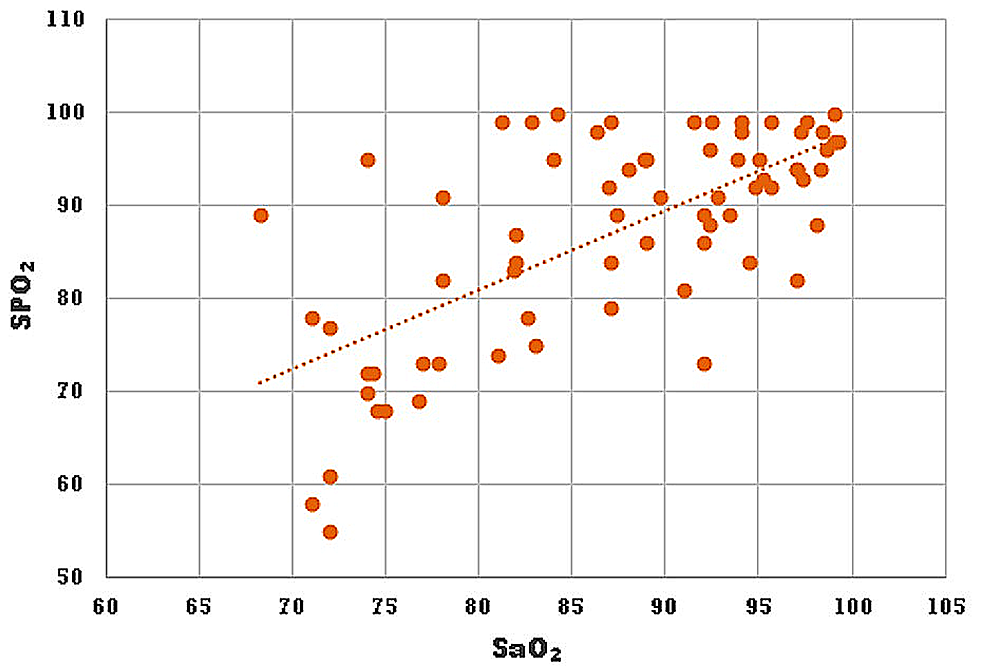 Figure
3:
Scatter diagram showing a correlation between SpO2 vs. SaO2 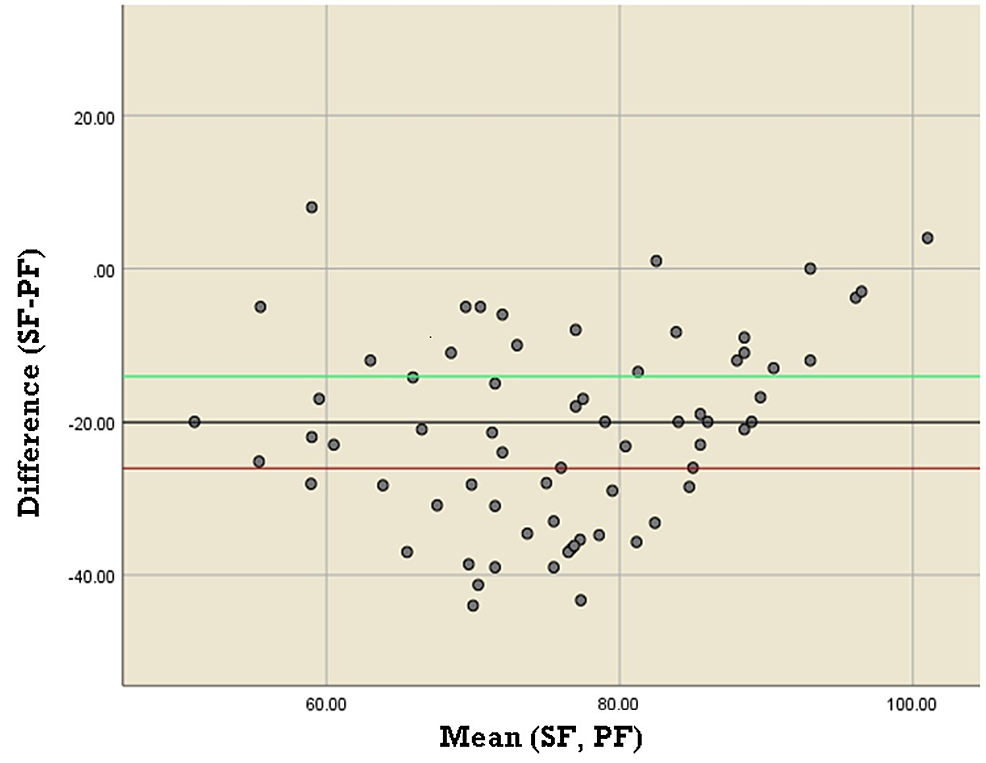 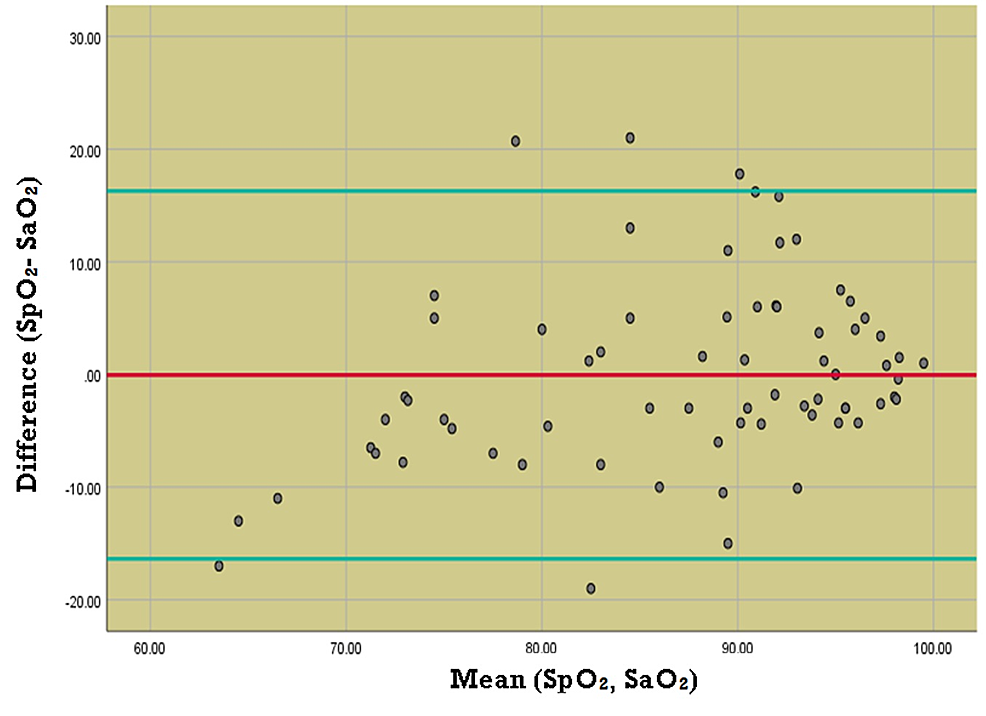 The management of COVID-19 patients with respiratory distress mandates utmost vigilance. The severity of signs and symptoms of COVID-19 may range from none or mild to acute respiratory failure requiring immediate intervention [9]. Nevertheless, mild ARDS has often been found to be present in mildly symptomatic and spontaneously breathing patients [10]. The overwhelmed healthcare systems in this COVID-19 era require a greater proportion of quick and less invasive modalities for early screening and management of patients presenting with respiratory distress [11]. One such modality is pulse oximetry, by which SpO2 can be recorded. The accuracy of the finger-probe pulse oximeter has been quoted as ±2% at a given range of oxyhemoglobin saturation (70-99%). In patients who are critically ill, SpO2 does not reliably indicate SaO2 [12,13]. Racial bias can also affect the accuracy of pulse oximetry, with darkly pigmented people at an increased risk of hypoxemia [14].

A study involving 15 patients by Wilson-Baig et al. indicates that SpO2 does not reliably predict SaO2, with SpO2 underestimating SaO2 constantly [7]. In their study, SpO2 values consistently read lower than SaO2, with an average of 5.3% with 95% limits of agreement on Bland-Altman analysis. They have proposed that silent hypoxia in COVID-19 patients at an earlier stage could be explained in part by their observations. Their results may be attributed to the low sample size in their study. In our study of 70 patients, we found that SpO2 and SaO2 measurements had a minimal mean difference of 0.048% with a significant proportional bias (p = 0.011). On correlational analysis, we found a moderately positive correlation between SpO2 and SaO2 (r = 0.68, p<0.001), and SpO2 and PaO2 (r = 0.53, p<0.001).

In our study, we excluded all patients who had any cause of underestimation of SpO2 and included only those who had good quality pulse oximetry traces. In 70 patients, PaO2 and SpO2 were measured with the same FiO2, and SF and PF ratios were calculated. The SF ratio cutoff of 404.7 for diagnosing mild ARDS (PF ratio ≤ 300) has a sensitivity of 80.6% and a specificity of 53%. The cutoff accurately estimated (80.6%) of cases with mild ARDS although low specificity (53%) suggests that 47% of individuals who did not have mild ARDS might be misclassified as such (false positives), which can result in overdiagnosis. However, while screen testing and triaging patients with severe diseases, i.e., COVID-19, high sensitivity of a test is important to not miss patients (false negatives). The strength of correlation between SF ratio and PF ratio and that between SpO2 and SaO2 was moderately positive.

Pulse oximetry has been identified as an important tool for risk stratification and assessment of disease severity in COVID-19. A study by Sinha et al. utilized pulse oximetry as a predictor of the need for intubation by using the respiratory rate-oxygenation (ROX) index, which is defined as the ratio of SF to respiratory rate in breaths per minute [15]. Lipworth et al. have utilized the SF ratio along with clinical biomarkers and concluded that rising biomarkers in conjunction with falling SF ratio or PF ratios have serious potential implications in the management of COVID-19 patients. Several studies have incorporated the SF ratio and PF ratio for computing diagnostic and management strategies in ARDS [16-18].

We performed a cross-sectional study among COVID-19 patients to determine the relationship between SaO2 and SpO2 and compared the SF ratio and PF ratio and found that they correlate to each other in COVID-19 patients; however, the trend is inconsistent as the Bland-Altman plot showed a mean difference of -20.08% between SF and PF ratio measurements with a significant proportional bias (p = 0.001).

This study has a few limitations. We included patients who presented on room air only. We did not include patients who were having unoptimized comorbidities. We used the same brand of the pulse oximeter and ABG machine in our study to reduce bias. Hence, our results may differ from those of studies that use any other pulse oximeter and ABG machine. Also, we did not assess the role of skin pigmentation in pulse oximetry in our study. Future studies should focus on patients with moderate to severe COVID-19 ARDS to further establish the correlation between SpO2 and SaO2.

SpO2 was found to have a positive correlation with SaO2 and PaO2. The SF ratio has acceptable sensitivity but low specificity in estimating mild ARDS. Therefore, pulse oximetry can be used as a tool for the early diagnosis of mild COVID-19 ARDS as per the given considerations and clinical correlation.