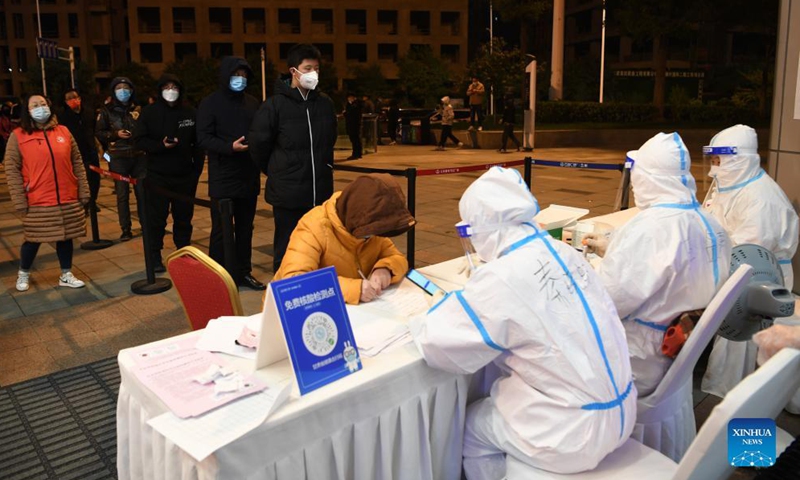 On Monday, authorities in Lanzhou, Northwest China's Gansu Province, stressed that local officials should resolutely prevent oversimplification and one-size-fits-all approach to COVID-19 prevention and control work, put an end to inflexibility and indifference, and improve the efficiency of nucleic acid screening, transport and isolation.

The order came after a 3-year-old boy died of carbon monoxide poisoning, which sparked a controversy online as some wondered whether the tragedy was related to local COVID-19 prevention workers, who were suspected to have delayed the family's effort to seek medical attention.

Local police also published a notice on Monday night saying that at 13:43 pm on Monday, Lanzhou Public Security Bureau received a call for help, which said that two people had passed out at home in Qilihe district, including one child who had stopped breathing. The branch immediately sent police to the scene to deal with the situation, and helped the people to send the two to the hospital for treatment at 13:57 pm.

Among them, the child died despite rescue, and the other person was treated in hospital and was stable.

The incidence caused wide discussions as some local residents suspected that the child was blocked by the local epidemic prevention workers on the way to hospital.

On Tuesday, Caixin News quoted the father of the child as saying that at around 12 pm on Monday, he found his wife fall on the ground unconscious after using a liquid cooker to boil water and take a bath.

After about 20 minutes of rescue, his wife's breathing began to stabilize. At this time, he turned to find that the seemingly sleeping child was unconscious, flushed and uncomfortable.

At about 13:15 pm, because the rescue effect was not obvious, the father rushed out of the house with the child in his arms to go to a nearby hospital for emergency treatment, but due to the epidemic control requirements, he encountered difficulties when he tried to take his child out, and one of the epidemic prevention workers said that the father needed community consent to go out.

At about 14:30, the father took a taxi, and arrived at the hospital in around 10 minutes with the help of local residents and workers, Caixin reported.

Lanzhou has been facing a COVID-19 flare-up recently. On Monday, 58 new asymptomatic cases were reported in Gansu, including 51 in Lanzhou, among whom 29 were in Qilihe district.

He stressed that the local government should make further efforts to provide specific services for people's livelihood, such as ensuring stable food supply and prices and providing safe heating. Zhu said local authorities should not delay solving people's problems and should do their best to meet the basic needs of the people in the prevention and control of the epidemic in different areas.

"We should be more responsive to the concerns of all parties, open channels for the people to express their demands, and listen carefully to their opinions and suggestions," Zhu said.

Since the beginning of the COVID-19 epidemic, the central government has been stressing the importance of precise and targeted prevention and control measures, and avoiding a one-size-fits-all approach.