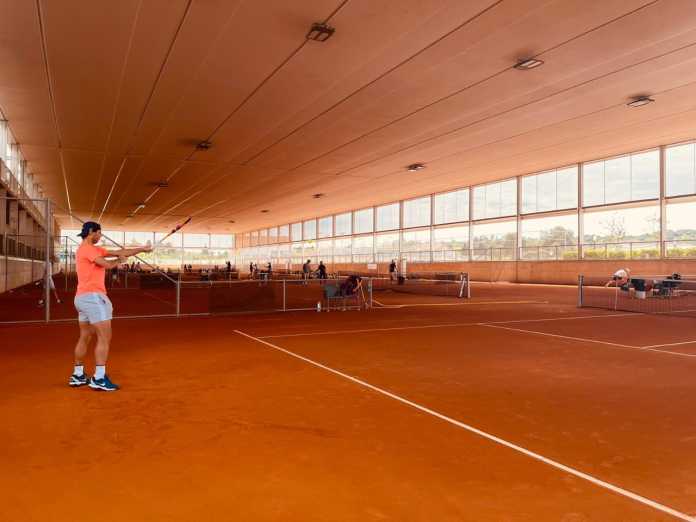 Rafael Nadal has returned to training after an injury forced him to spend time on the sidelines.

The Australian Open champion resumed training on Monday after four weeks out due to a stress fracture in his rib.

It is an ideal time for the 21-time Grand Slam winner with a little over a month to go before the French Open where the Spaniard will bid for a record-extending 14th title.

Rafael Nadal, 35, was seen on the court in the final of Indian Wells against Taylor Fritz on March 22, falling to a straight-sets defeat for his first loss of the year.

He sustained the injury in the very same game, complaining of having breathing difficulties.

His time on the sidelines meant he did not participate in the Miami Open in his bid to add another ATP crown to his resume.

The injury also forced him to skip claycourt tournaments in Monte Carlo and Barcelona in preparation for the French Open.

He could only watch from the sidelines as Stefanos Tsitsipas managed to defend his crown at the Monte Carlo Masters.

“Today after 4 weeks without stepping on a tennis court, first soft training,” Nadal wrote on Twitter, alongside pictures of him practicing on clay.

The 21-times major winner could feature in ATP Masters 1000 events in Madrid and Rome before the French Open, which gets underway on May 22.

Tags: STRESS
« The Effect of Mindfulness-Based Breathing and Music Therapy Practice on Nurses’ Stress, Work-Related Strain, and Psychological Well-being During the COVID-19 Pandemic: A Randomized Controlled Trial
How to rejuvenate your body and mind every day of the week »