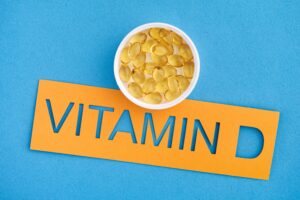 Muscle loss is a preventable cause of disability that aging people should pay more attention to.

Researchers in Brazil and the United Kingdom found that older folks who were deficient in vitamin D increased their risk of losing muscle and strength by 78 percent.

Vitamin D has several functions in the body, including repairing muscle tissue and releasing calcium for muscle contractions.

For the study, researchers analyzed data from more than 3,200 people in the UK aged 50 and older who did not yet have age-related muscle loss. Age-related muscle loss, which can partly be explained by atrophy, is a major risk factor for injury and disability later in life.
Participants were followed for four years. Their grip strength was evaluated to gauge overall muscle strength.

Those with a vitamin D deficiency – which is marked by blood levels less than 30 nanomoles per liter – had a 70 percent higher risk for developing muscle loss by the study’s end than those with normal levels of vitamin D (more than 50 nmol/L).

After excluding patients who had osteoporosis or were supplementing with vitamin D, the risk of developing muscle loss jumped to 78 percent for those with deficiency.

Researchers not only concluded that vitamin D deficiency can promote muscle and bone loss, but that supplementing with vitamin D, if deficient, can be helpful.

The best source of vitamin D is natural sunlight – the body manufactures it when the skin is exposed to the sun’s rays. It is found in small amounts in some foods like mushrooms, eggs, fish, and fortified foods and beverages. Supplements are often recommended.

Along with exercise and a healthy diet, vitamin D may be necessary in maintaining muscle and independence with age.