Posted by: admin Categories: SPORTS & ATHLETICS
Comments Off on Mother of Navy SEAL who died during ‘hell week’ training says he was ‘out of breath’ in last phone

The mother of a Navy SEAL candidate who died last month during a brutal training regimen called 'hell week' broke her silence Thursday and said she's still seeking answers from the military on what happened - though the longtime nurse speculated that he may have 'suffocated from his own bodily fluids' after a particularly intense swimming workout.

She added that her son, 24-year-old Kyle Mullen, sounded 'out of breath' during his last conversation with her on the day of his death.

'The last words he said were I love you, mom,' Regina Mullen said during an emotional interview on Good Morning America Thursday.

'No mother should ever have to feel the pain that I have,' she added.

Mullen, who hailed from Manalapan, New Jersey, passed away on February 4 this year following his completion of 'hell week' - a rigorous five-and-a-half day test that includes 20 hours of physical training per day and is intended to replicate conditions of combat.

Most candidates do not finish the week, but Mullen did - before being immediately taken to Sharp Coronado Hospital in Coronado, California, with shortness of breath and other symptoms the Navy has not released. He was reportedly treated with oxygen twice on the day of his death.

Regina Mullen told GMA reporter Amy Robach that she believes her son may have passed away as the result of a condition called swimming induced pulmonary edema, in which fluids from the blood leak into the lungs and can suffocate someone. The condition often occurs during intense immersion exercises.

The military has not released an official cause of death.

Regina is still searching for answers about the incident and demanded changes to the training program's safety regimen. She also described the heartbreaking moment when she realized something was wrong.

'He sent me a text, hell week secured,' she told Good Morning America. 'I saw and called him and he says, I did it, mom. And he was so happy and I heard him out of breath and I said "Kyle are you okay? Are you hurt? Are you in a hospital?"'

'And he just responded, "don't worry, mom. I'm good. I love you" and he hung up and then I texted him immediately, you don't sound good. And I never heard from him again,' she added. 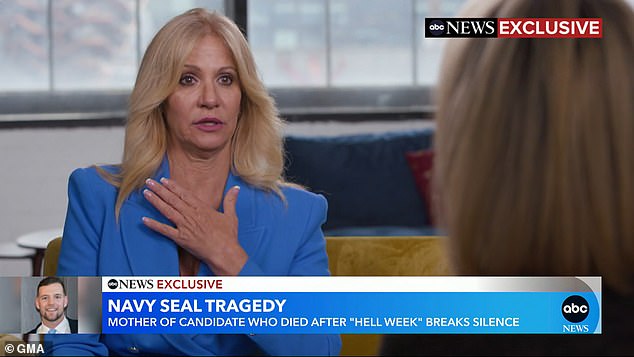 Regina Mullen, the mother of recently deceased Navy SEAL candidate Kyle Mullen, 24, gave an emotional interview to ABC's Good Morning America on Thursday about her son's death, which she attributed to a condition caused by intense swimming exercises 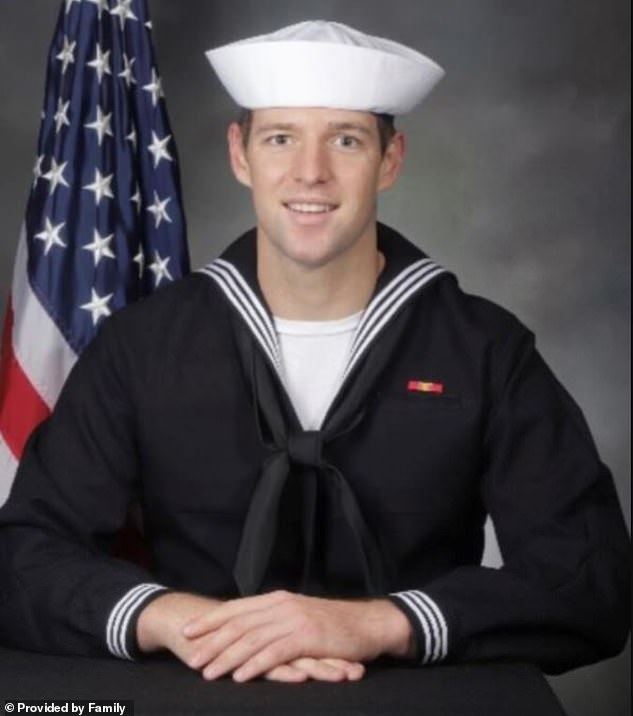 Former Navy SEAL candidate Kyle Mullen, 24, died on February 4 shortly following an intense five-and-a-half day training regimen called 'hell week,' where participants are physically challenged for 20 hours a day and are forced to operate on little to no sleep

Mullen said she was notified of Kyle's passing within 24 hours after his death when 'people in white suits' showed up at her door - which she thought meant her son had been hospitalized.

Despite the month-long investigation into her son's death, Mullen still hasn't received her son's autopsy results.

Kyle was not actively training at the time of his death, according to a spokesperson for the Navy.

'We extend our deepest sympathies to Seaman Mullen's family for their loss,' said Rear Adm. H.W. Howard III, commander, Naval Special Warfare Command in the only statement regarding the Navy SEAL candidate's death. 'We are extending every form of support we can to the Mullen family and Kyle's BUD/S classmates.' 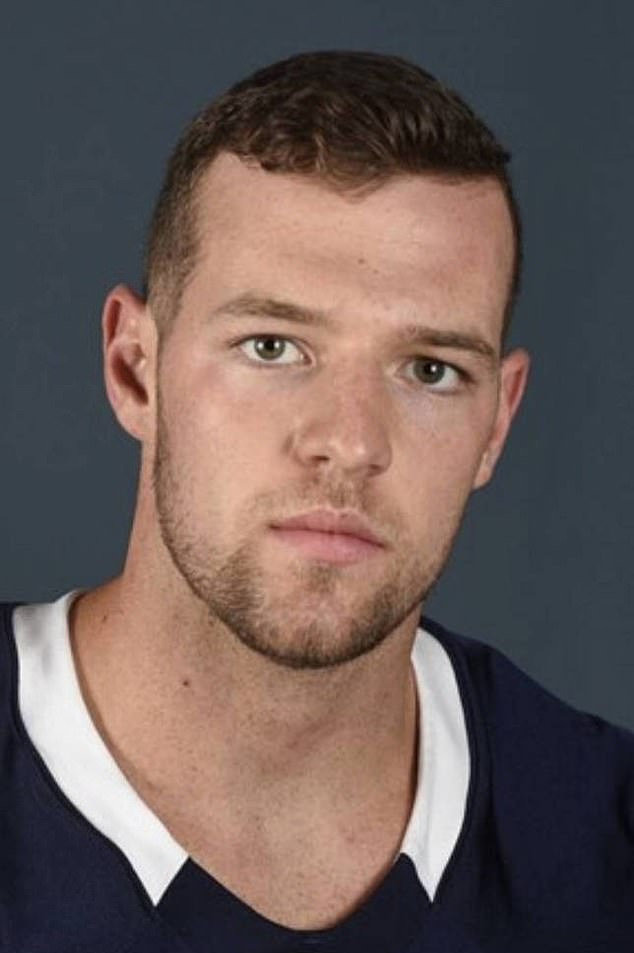 Mullen passed away shortly after being taken to a hospital in California, where he had been given oxygen twice 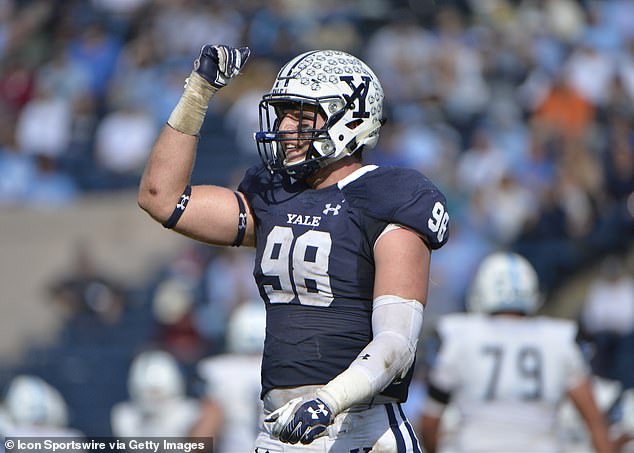 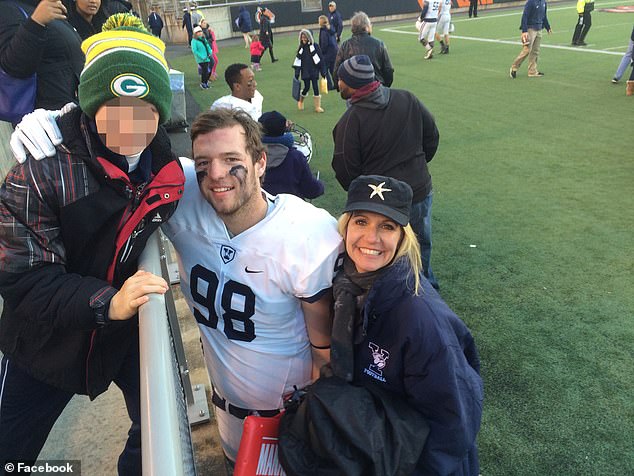 Mullen, seen on a football field after a game with his mother, Regina (right) in an undated picture

The former standout football player at Yale and Monmouth University - where he helped the Hawks win a conference championship in 2019 - joined the highly-regarded Navy special operations force to 'be the best of the best,' his mother said.

'He really wanted to do it to help save people,' Regina Mullen said.

She told Robach of the horror she faces, 'waking up every night thinking of him, thinking of how he died probably not breathing' and how she believes that her son was abandoned right when he was most in need.

'I'm told that the medical team was let go at 12:00 noon and someone was on call and they didn't answer,' Regina said.

When asked if she ever received any explanation from anyone within the military regarding the tragedy, the nurse said 'no', and gave her account of what she thinks happened to her son.

'I believe they laid him flat and he most likely couldn't breathe. He probably suffocated from his own bodily fluids,' Regina said, noting that her son had already been treated twice in January for SIPE, which involves bodily fluids from the blood leaking abnormally from the lung's small vessels into the organ's airways.

He was also treated with oxygen twice on the day he died.

'Even during the process my son was telling me it's discouraged to say I need to go to the medical [team] -- he said they wouldn't let him go to medical unless you quit and ring the bell,' Regina added.

If a Navy SEAL candidate rings the bell during the five intense days of 'hell week', they face automatic dismissal and cannot reenter training for at least two years. 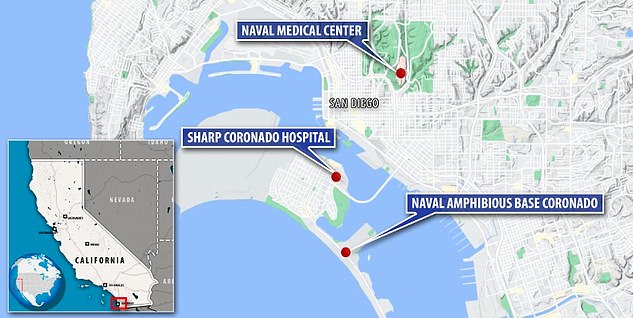 Navy SEAL training most commonly place at the naval base in Coronado, California, where Kyle was stationed 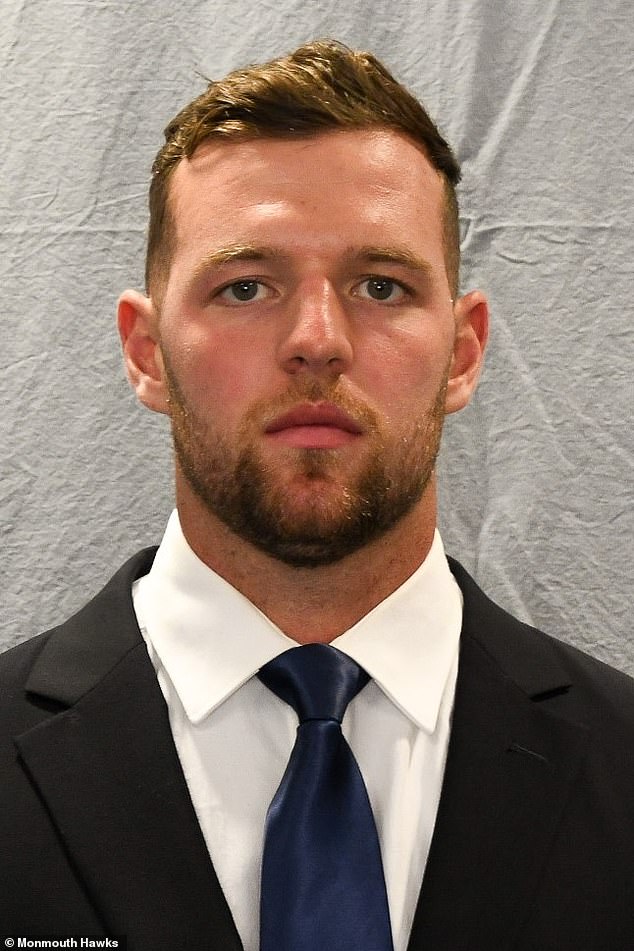 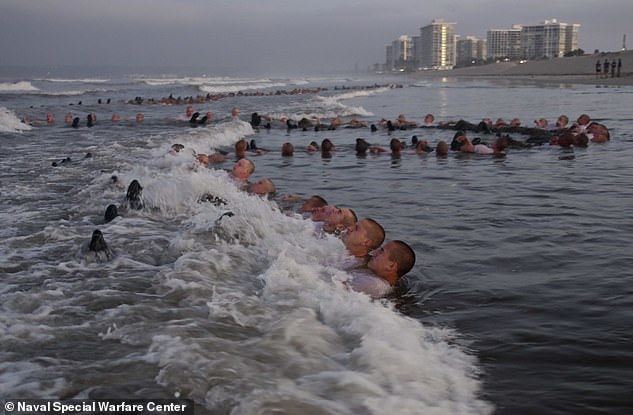 Hell Week, which takes place in the fourth week of Phase 1 of Basic Underwater Demolition/SEAL (BUD/S) training,  is a grueling 'five-and-a-half days of cold, wet, brutally difficult operational training on fewer than four hours of sleep,' the Navy described, and candidates 'run more than 200 miles and do physical training for more than 20 hours per day'

The family's attorney, Kevin Uniglicht, who also appeared on GMA Thursday, threw some shade at the military and said: 'We've heard it many times "No one left behind." And I think unfortunately Kyle was left behind in this situation.'

Regina says that when she flew out to California in the aftermath of her son's death, a commander told her that Kyle had been offered medical treatment but refused it.

'At that point I said he doesn't know what day of the week it is. He hasn't slept in five days,' she said. 'How can he make that determination? And I said to him, where was your medical team? Where were they?'

In response, the naval special warfare command released a general statement saying that all Navy SEAL candidates receive head-to-toe medical evaluations including a 'full set of core vitals a minimum of once a day and as require the throughout the week as well as upon conclusion of the assessment event.'

When asked what the Navy needs to do to avoid repeating another similar tragedy, attorney Ryan Andrew, who was also a guest on Good Morning America, said that having 'someone standing with just a stethoscope' would be a game changer.

'That's it. He just needed someone to care about his condition when he came off before he went to go lay down and go to sleep,' the lawyer added. 'A medical professional with a stethoscope could have prevented this.'

Regina said that the Navy needs 'better training, better monitoring' and that her son kept a journal in which he wrote, "complete the mission, take care of your men" and feels let down that her son was not taken care of by his peers.

'No mother should ever have feel my pain that I have,' she concluded.

The Navy produces around 200 to 250 SEALs a year. In the last two decades, 17 have died during training, NBC News reported.

'The sweetest, most loving and full of life human I've ever met,' said another social media tribute to the 24-year-old.

The Navy produces around 200 to 250 SEALs a year. In the last two decades, 17 have died during training, according to NBC News.

Hell Week is the fourth week in Phase 1 - which takes place in Stage 3 - and is a brutal week of physical activity and very little sleep.

'Hell Week is the defining event of BUD/S training,' the Navy says.

It starts on a Sunday and runs to Friday.

Trainees are constantly in motion. They are  running, swimming, paddling, carrying boats on their heads, doing log PT, sit-ups, push-ups, rolling in the sand, slogging through mud, paddling boats and doing surf passage, the Navy said.

On average, only 25 percent of candidates make it through Hell Week, which is the toughest training offered in the military.

Throughout the week, there will be medical personnel on site to help exhausted or injured candidates.

Candidates will also experience brutal nagging, enticing them to quit and mimicking their inner voices, highlighting their pain.

Trainees start in Illinois for two months to prepare for BUD/S.

Candidates will go through a modified physical fitness test to prepare them for the rigorous activity they will endure during BUD/S.

Candidates who do not pass will be moved to different jobs of the Navy.

Candidates will be introduced to 'BUD/S physical training, the obstacle course and other unique training aspects' in this stage.

It is used to further develop 'physical training, water competency and mental tenacity while continuing to build teamwork.'

Each week, trainees will experience harder conditions, such as longer runs, swims, and workouts.

They will also learn how to conduct hydrographic survey operations.

This phase sees a significant drop in candidates.

This phase also lasts seven weeks and introduces underwater skills that are unique to Navy SEALs.

Candidates need to feel comfortable in the water and demonstrate a high level of comfort there.

Half of this training will take place on San Clemente Island - roughly 60 miles from base and they will practice the skills they learned in Stage 3.