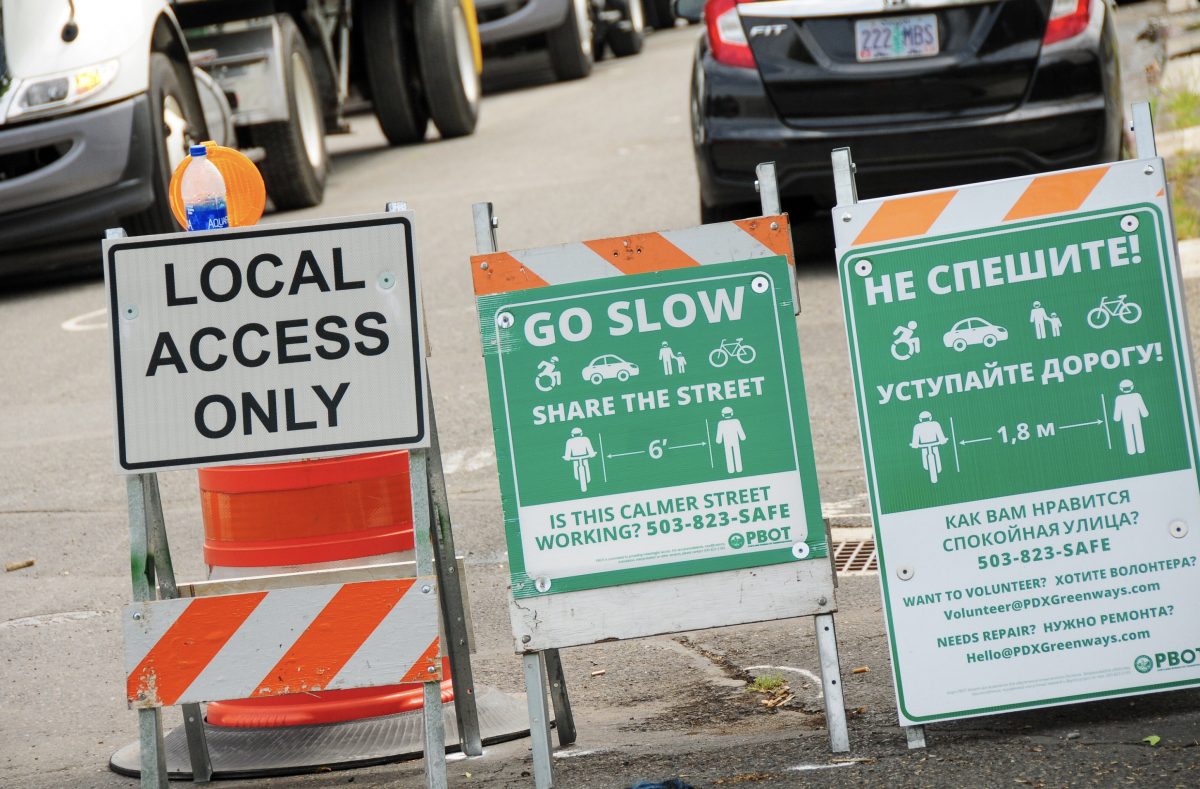 One of over 200 installations citywide.
(Photos: Jonathan Maus/BikePortland)

It’s been almost 11 months since the Portland Bureau of Transportation launched the Slow Streets program in response to a dramatic increase in walking and biking citywide at the outset of the Covid-19 pandemic.

Now the question is: What comes next? Will PBOT gather up all the signs and barrels and open streets back up to drivers? Or will they transition the program into a lasting network of safer streets?

There are currently 210 installations of orange barrels and small barricades on residential streets throughout Portland, installed to encourage car and trucks drivers to slow down, take alternate routes, and leave the streets for people on foot, bikes and other mobility devices.

Slow Streets was one of three pillars of PBOT’s response to the pandemic. They also created a Healthy Business permit program that encouraged outdoor dining and carfree plazas; and implemented infrastructure updates through their Safer Busy Streets program.

As the threat of Covid recedes thanks to vaccinations, PBOT wants to extend these efforts and make some of the changes permanent.

What PBOT is thinking (and hearing) 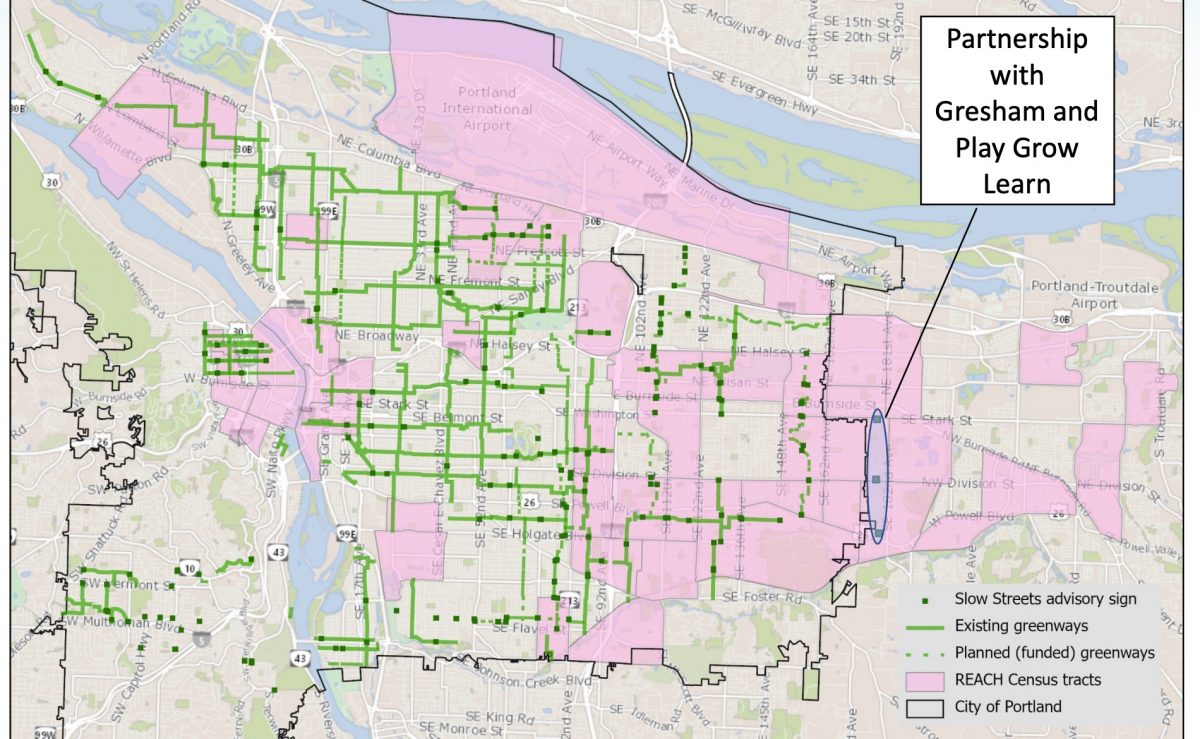 Where the Slow Streets installations are. (Pink are Census tracks that are part of Multnomah County’s Racial and Ethnic Approaches to Community Health program)

“We need to be physically distanced now, but we need community always.”
— Scott Cohen, PBOT

PBOT Program Coordinator Scott Cohen shared an update on the Slow Streets program with the city’s Bicycle Advisory Committee earlier this month. He acknowledged that PBOT initially planned for the car traffic diverters to only last for three to six months. “And here we are in month 11… and we’re asking some questions: How do we keep providing this need efficiently? And how do we adapt and retain flexibility? How can we better engage on the public health focus and with our BIPOC community organizations?”

Cohen added that PBOT sees a continued demand for the installations and their benefits.

A text-based survey on the installations that received nearly 1,000 responses informed PBOT that the temporary diverters are not only giving people more, lower-stress space to walk and bike, they give people a stronger sense of community. “A stronger community is a benefit that will last beyond the pandemic,” Cohen said. “We need to be physically distanced now, but we need community always.”

Cohen is also aware that it’s been a tough winter on the signs and barrels as many installations have been vandalized, banged up, or moved — all of which has driven up maintenance costs. Even so, given the positive evaluation of the program thus far, PBOT seems poised to make at least parts of it permanent.

“What we need to do is to adapt this program to something that is more resilient,” Cohen said as he shared examples of neighborhood traffic diverters from other cities and mock-ups he envisions for Portland (that included 15 mph speed limit and “shared street” signage!).

Future installations could include signage that leads people to vaccination sites or that share other important public service messages, Cohen said. Transforming the diverters into permanent public art is also something PBOT is considering. No complete list has been shared yet, but Cohen mentioned a permanent diverter will be coming to SE Salmon and 30th.

“I would like kids to be able to bike to school when they go back to school.”
— Catie Gould, Bicycle Advisory Committee

Kelly Hansen said she wants to make ones installed on NE Tillamook and 92nd near Jason Lee School permanent. “I’ve biked there during rush-hour pre-Covid and I felt like no kids could bike to school because there were a million cars on the greenway,” she said.

BAC member Catie Gould said she’s concerned PBOT hasn’t done enough to make greenway streets safer during the pandemic. “There’s not been a huge difference for me in the quality of bicycling on greenways and I feel like within a few months [traffic conditions] might change dramatically.” Gould also said she wants to see PBOT convert these installations to concrete traffic diverters. “I’m not sure why we’re saying these aren’t [permanent, concrete] diverters or that we’d deploy them in a way that isn’t going to stop cars… Because I would like kids to be able to bike to school when they go back to school.”

PBOT’s Cohen seemed to agree with these sentiments, but made it clear they must weigh other perspectives. “The orange barrels were great in the beginning. And then maybe it’s concrete barrels, and then it’s maybe more concrete barrels to actually act as a diverter. I think these are steps on the road to making the street network and the greenway network operate better. But we’ve got to bring people along with us.”

Expect a big announcement next month

In the coming weeks, I have a hunch PBOT is going to make a big announcement about the next phase of these programs.

On March 10th, they announced an extension of their Healthy Business permit program through October 2021 based on its broad support and popularity (over 1,000 permits have been issued so far) with restaurant and cafe owners. A survey with over 3,000 respondents taken in September revealed that 78% of people who responded felt safe dining outdoors and a whopping 94% of them said the outdoor dining parklets and carfree plazas should continue.

PBOT also announced they’re evaluating a new permit option, “for residents to safely activate their neighborhood streets.” (The beloved PBOT Block Party permit program has been suspended due to Covid ever since last spring.) We’re working to get more details on this.

Another good sign that these programs aren’t going anywhere is that PBOT recently won a $47,600 grant from Travel Oregon to create new signage and placemaking around 20 Healthy Business plazas.

And then there’s Sunday Parkways. The 2020 edition was all virtual, but given where we’re at with the pandemic and the lessons PBOT has learned about open streets, I have a hunch they have something up their sleeve for this year’s events. Perhaps a hybrid event (or events) where they cordon off a route with barricades and intersection monitors, but forego the activity hubs and food vendors in the parks? This would give people the chance for carfree walking and rolling while discouraging large groups.

Asked about this possibility yesterday, PBOT Communications Director John Brady said, “We’ll be making an announcement in mid-April. Until then, I’m not going to spoil any surprises.”

— Jonathan Maus: (503) 706-8804, @jonathan_maus on Twitter and [email protected]
— Get our headlines delivered to your inbox.
— Support this independent community media outlet with a one-time contribution or monthly subscription.

« 5 tips to get over a fear of needles
Can Anxiety Cause A Fever? A Mental Health Expert Explains »