DUBLIN, Ohio – After he polished off a spectacular Saturday in which he made a hole in one and stormed to a 6-shot lead in the Memorial Tournament at Muirfield Village Golf Club, Jon Rahm started to head toward to scoring.

But just a few steps off the back of the green at the 18th hole rimmed with spectators, he was met by a PGA Tour official and his stupendous day took a horrible turn.

Rahm was told he had tested positive for COVID-19.

According to a release from the PGA Tour, Rahm was subject to contact-tracing protocols beginning Monday due to coming in close contact with a person who was COVID-19 positive. Rahm was given the option to remain in the tournament and had to undergo daily testing. Rahm had tested negative every day until Saturday when a test he took after his storm-delayed second round ended.

Rahm was then forced to withdraw from the tournament.

“I’m very disappointed in having to withdraw from the Memorial Tournament,” Rahm posted on Twitter. “This is one of those things that happens in life, one of those moments where how we respond to a setback defines us as people. I’m very thankful that my family and I are all OK. I will take all of the necessary precautions to be safe and healthy, and I look forward to returning to the golf course as soon as possible.”

A medical advisor from the Tour notified Rahm, who doubled over and said, “Not again.” It is not known what Rahm was referring to.

“The protocol that we have had in place for the last 50 events is being followed to the letter and unfortunately, we are in a situation where we are this evening,” said Andy Levinson, senior vice president of tournament administration for the PGA Tour.

Surreal TV moment as six-stroke leader Jon Rahm learns he tested positive for COVID and Jim Nantz tries to make sense of it without knowing what Rahm's been told pic.twitter.com/WvD6LmAlxs

In accordance with CDC guidelines, Rahm will need to remain in isolation through June 15. This puts his participation in the U.S. Open at Torrey Pines in San Diego which starts June 17 in jeopardy. Rahm, 26, won the first of his five PGA Tour titles in the 2017 Farmers Insurance Open at Torrey Pines.

It is not known if Rahm is fully vaccinated. If he had been, he would not have been subject to daily testing.

“If someone had been fully vaccinated, and fully vaccinated under our protocol is, and it’s defined by the CDC, is 14 days past the full cycle of a vaccination. They do not have to test as a result of being a close contact,” Levinson said. “Unless they have developed symptoms.”

Levinson said “north of 50 percent” of the PGA Tour players have been fully vaccinated.

Looking to be second to repeat

Rahm, the world No. 3, had taken control of the Memorial on Saturday. Ignited by an early morning ace and sparked by a late afternoon birdie blitz, he put himself in position to join Tiger Woods as the only players to win consecutive titles in the storied history of the event.

Rahm made a hole-in-one on the 16th hole at 8:45 a.m. ET Saturday as he completed his storm-delayed second round – 8-iron from 183 yards – and then shot a 6-under 30 on the back nine during the third round to run away from the field and set up a potential rout on Sunday.

He opened with a 3-under-par 69 on Thursday and then took a 2-shot lead with a 65 in the second round. Then he got really hot on a simmering day at Muirfield Village Golf Club, manhandling Jack Nicklaus’ renovated gem with a 64 to move out to a 6-shot lead.

Rahm had tied the 54-hole record of 18 under and was six shots clear of 2019 Memorial champion Patrick Cantlay and Collin Morikawa, who won the 2020 Workday Charity Open at Muirfield Village, and well within reach of the first-place check of $1.674 million.

Then he was told he tested positive.

“That’s obviously really disappointing,” Cantlay said when told of the news of Rahm’s situation. Cantlay played the third round with Rahm and Scottie Scheffler. “It’s kind of the worst situation for something like that to happen and he played awesome today and it’s just, it’s really, it’s a shame. It’s unfortunate. I’ve already had COVID, so, yeah, I got to imagine I have antibodies, so I don’t feel too concerned, but obviously it is somewhat of a concern, but I got to imagine that I had it earlier this year, so I’m feeling pretty OK about it.”

Scheffler said he was in scoring when Rahm told him the news.

“Jon looked very frustrated, which I thought was weird, so I kind of smiled at him thinking, I was, like, why, what happened? I was already inside. I didn’t see any activity on the green, so I kind of smiled at him just to see and, I mean, he just goes, ‘Good luck tomorrow, and, I’m, like, ‘Thanks, man. You play good. too.’ I was just really confused,” Scheffler said. “He’s, like, ‘No, man, I just tested positive. My heart just sank. It’s terrible that that happened.”

As it stood Saturday night, Morikawa and Cantlay shared the lead at 12 under. Branden Grace and Scheffler were joint third at 9 under.

The PGA Tour is conducting a contract tracing investigation. Rahm played with Morikawa and Xander Schauffele in the morning and Cantlay and Scheffler in the afternoon. Late on Saturday night, however, the PGA Tour said none of Rahm’s playing partners will be required to go through contact tracing protocals. 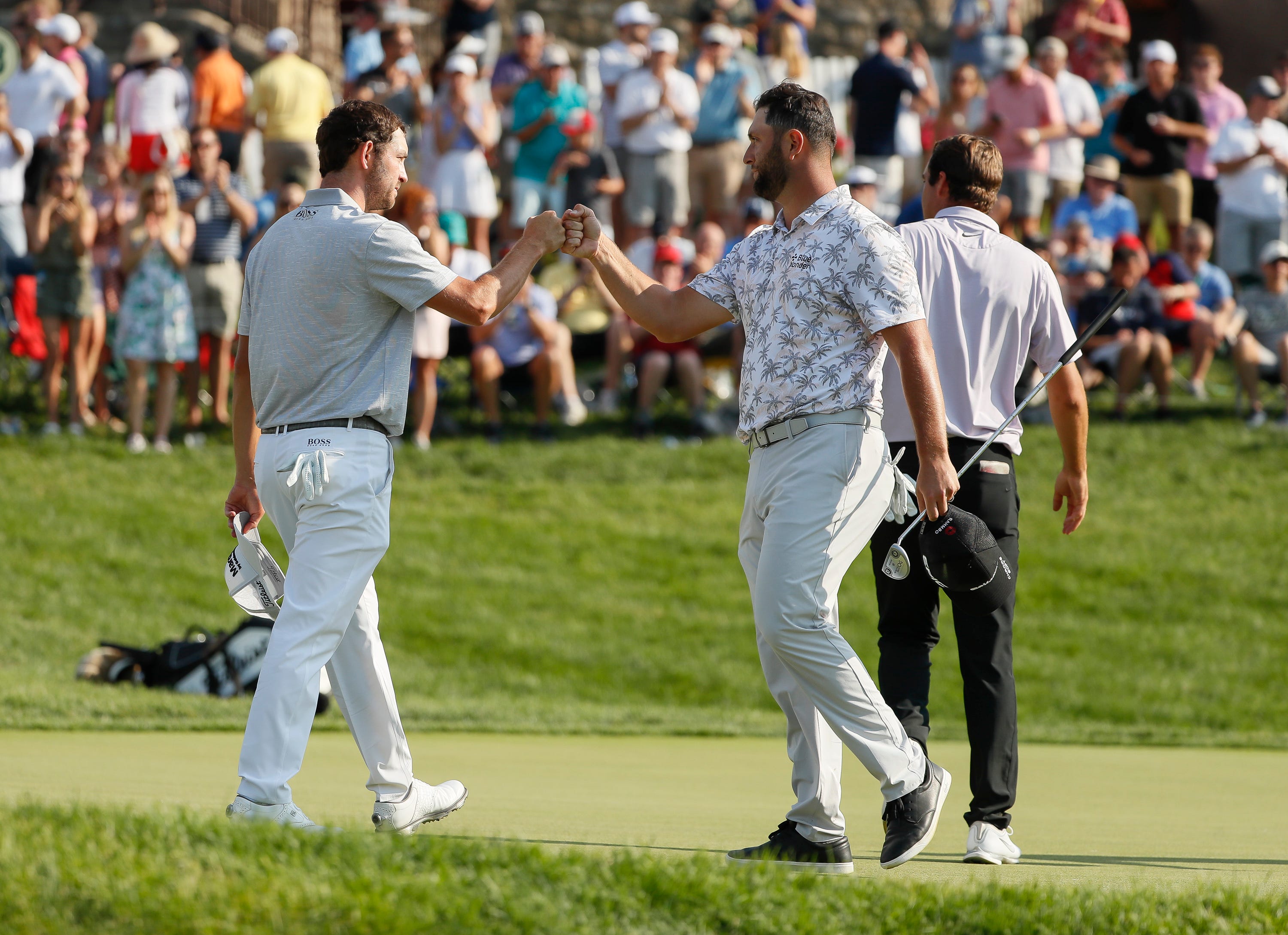 Jon Rahm fist bumps Patrick Cantlay following the third round of the Memorial Tournament at Muirfield Village Golf Club in Dublin, Ohio on Saturday, June 5, 2021. Photo by The Columbus Dispatch

“So they’re being interviewed by our contact tracing team this evening, and we will make a determination as to whether or not they meet that definition of close contact, and if they do, then they will take a test in the morning.” 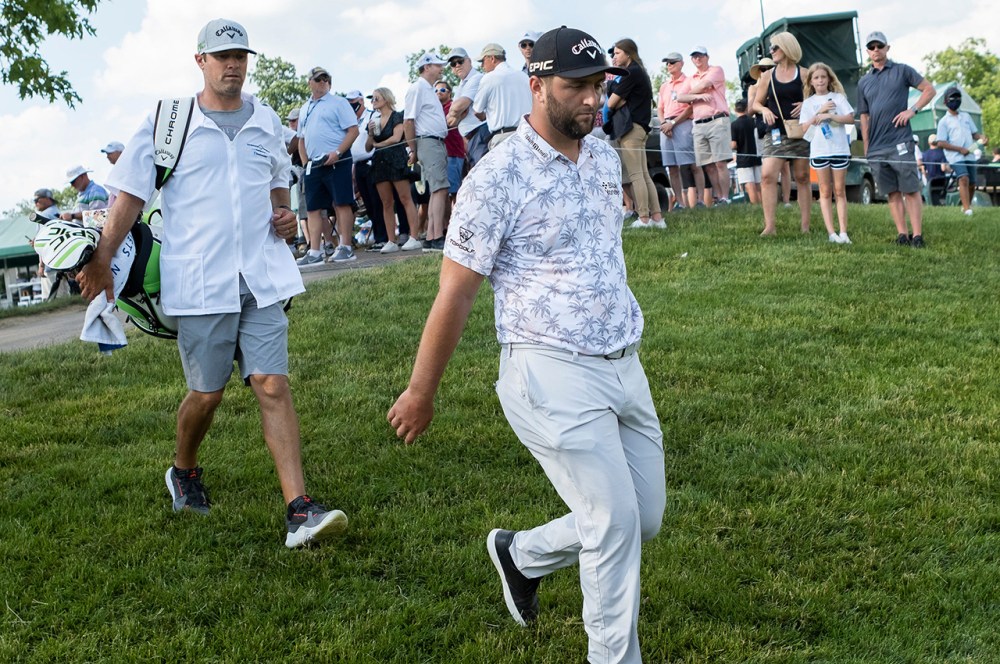